Rachel Cory entered the land of Bay City in 1967, a mere three years after the show’s inception. While she was a villainess at first, once actress Victoria Wyndham was recast into the role in 1972 from Robin Strasser. Rachel would be aligned in a love story with Mac Cory, transforming into Another World’s (AW) legacy super couple. Wyndham truly turned the part into her own, remaining with the show until it ended in 1999, and Rachel will forever be iconic in the eyes of AW fans everywhere.

It’s not often that a child soap actor grows at the same speed of their character, so General Hospital’s (GH) Robin Scorpio and actress Kimberly McCullough are anomalies in the world of daytime drama, where characters often suffer from Soap Opera Rapid Aging Syndrome (SORAS). Kimberly and Robin entered the land of Port Charles in 1985, and to this day (almost 35 years later), Scorpio still graces GH now and again. Watching her grow from a little girl to a teenager, then a young woman, and turning into a mom has been a joy for GH fans over the years.

13. Stephanie Forrester – Bold and the Beautiful

Played by actress Susan Flannery, Stephanie Forrester was part of the Bold and the Beautiful’s first show in 1987, and would last with the soap for well over two decades until the character passed away from lung cancer in 2012. Despite the fact that she has not been around for about seven years now, the character’s influence still has a huge presence on the show even to this day.

12. Adam and Stuart Chandler – All My Children

The good-versus-evil twin storyline is a reoccurring theme in daytime dramas; however, not many have had the iconic impact of All My Children’s (AMC) Adam and Stuart. Adam would enter Pine Valley in 1983, with Stuart in tow one year later. Simply put, the twins were like night and day, with Adam being a power-hungry corporate tycoon who donned a three-piece suit, and Stuart with a heart of gold, love for art, and always crushing the soft sweater vest. More iconic than these two was the legendary portrayal of them by acclaimed actor David Canary.

11. Marlena Evans – Days of Our Lives

Over her 40-year tenure, Marlena Evan’s has experienced everything from an evil twin storyline to being presumed dead, experiencing surrogacy for genetically-engineered babies, being kidnapped a handful of times, and no one can ever forget when she was possessed by the devil himself! Life in Salem has been like a roller coaster ride, and Days of Our Lives (DOOL) fans have loved every moment with Evans onscreen.

She was married nine times, presumed dead a few too, lost her memory, was cloned at one point, and traveled in time. Sounds like the typical life of an iconic soap opera character, right? Guiding Light’s Reva Shayne was that and more to fans of the show, and now that there is no more Springfield, audiences miss this legendary character more than ever.

9. Lucinda Walsh – As the World Turns

The beauty of Lucinda was that she was a strong and powerful woman before these types of characters really existed in the land of soaps. Actress Elizabeth Hubbard played the no-nonsense Walsh from 1984 until the show went off the air in 2010. Not only was Lucinda a mega-mogul, she was also a loving grandmother and mom, who supported her clan, but also had a feisty edge to her.

When GH first hit the airwaves in 1963, Steve Hardy was a focal point of storylines and this would continue during his 33-year tenure on the show. While the character died in 1996 when the actor that portrayed him (John Beradino) passed away, Hardy’s legacy continues on with a strong Steve presence in some storylines and flashback memories.

Much like Steve Hardy, DOOL’s Tom Horton was a character that debuted with the show in 1965, and would remain pivotal in storylines until the actor who played him, MacDonald Carey, passed away in 1994. As a legendary character in Salem, Horton’s name still pops up frequently in shows, along with wife Alice, and some fans still get teary-eyed during Christmas episodes when their ornaments are hung on the Horton tree. Regardless of his passing, Carey will forever be etched in Days’ daily episodes, as his voice is heard during the intro, “Like sands through the hourglass, so are the days of our lives.”

GH fans are still treated with a dose of Laura on a daily basis, and it is because of her iconic status that audiences fought so hard this last year to keep Laura on the show. Actress Genie Francis was fired from the daytime drama in early 2018, but that would change very quickly; Laura would leave Port Charles, and be brought back later that year, participating in a riveting Ryan/Kevin twin-switch storyline.

You can’t mention Laura’s name without thinking about her legendary better half, Luke Spencer. Together, they were considered the first-ever soap opera super couple, with their wedding episode still in the record books for American daytime drama ratings. Having said that, Luke spent many years on his own in Port Charles, placed in the center of storylines for decades upon decades.

4. Stefano DiMera – Days of Our Lives

Think soap opera villain, and most think Stefano DiMera, whether they are Days fans or not! Stefano tortured the residents of Salem for many decades, and instilled fear in the land of daytime drama. As the years wore on, DOOL viewers grew to gain a certain respect for Stefano — after all, as evil as he was, he was also highly entertaining!

3. Victor Newman – Young and the Restless

What can one say about The Moustache? He’s a control freak that always wants his own way (or the highway), and is incredibly conniving when it comes to business ventures, as well as vindictive and spiteful. With that said, Victor Newman is also multi-faceted, with a huge soft spot for his grandkids, committed to his family, and has an unwavering love for his wife Nikki. What would the Y&R be without Newman? No fan wants to know!

2. Katherine Chancellor – Young and the Restless

Most longtime fans will remember that it was actually Katherine who brought Victor to Genoa City in 1980, and the two shared a very special friendship throughout the years. Played by the beloved Jeanne Cooper, Chancellor was a hard-nosed and strong businesswoman that broke a ton of barriers in the land of daytime drama. Engaging in legendary storylines like the first-ever lesbian fling (a kiss with “friend” Joann in 1977) to Chancellor’s facelift arc, and diving into the social issue of alcoholism, there is no one else like Katherine, and there never will be.

1. Erica Kane – All My Children

Erica Kane is undeniably the most popular and iconic soap opera character of all time, even eight years after AMC’s cancellation. Susan Lucci debuted on the soap as Kane in 1970, and over the years the character evolved from a selfish teen to a villainess and somewhat of a heroine. Kane had such a cultural impact in the world of daytime drama that Lucci hosted sketch-comedy show Saturday Night Live in 1990, had two Mattel “Erika Cane” dolls created, and even had three hit songs inspired by the character over the years – all titled after Kane. One was by Urge Overkill, the other by Aaliyah, and B5 wrote a song entitled “Erika Cain.” Not to mention that rapper Lil’ Kim has referred to herself at times as the “black” Erica Kane. Kane really a struck a chord with audiences and is still a household name today. 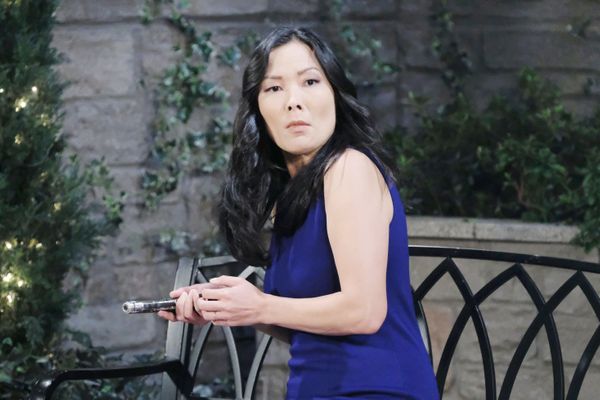