The characters on One Tree Hill have become some of the most loved out of all the teen series. Thanks to excellent writing and perfect casting, the actors became their characters and, although Lucas Scott (Chad Michael Murray) and Peyton Sawyer (Hilarie Burton) were featured as the “lead” stars, it really didn’t take long for Sophia Bush (Brooke Davis) and Nathan Scott (James Lafferty) to steal the show. Without a doubt, Nathan went through one of the best character developments on the show and while we were used to the assertiveness and humor of Brooke and the deep intellectual statements from Lucas, Nathan definitely had his fair share of humor and close-to-home quotes that may have been subtle and often times cloaked by his “jock” personality. Fans got a deeper appreciation for Nathan has he became such a wonderful man, father and husband, dropping these awesome lines along the way.

Early on, it was really easy to hate Nathan thanks to his attitude, the way he treated Peyton and of course the way he treated Lucas, but it also didn’t take long for him to show a soft side and one moment in particular all fans know was one of the biggest signs of the other side of Nathan. It’s a simple line, but the moment between Nathan and Haley where she agrees to tutor him and he gives her the Cracker Jack bracelet is one of the most significant in their relationship, which spans all nine seasons. He repeats the line in other episodes and the bracelet becomes a symbol of their relationship through every challenge they face.

Nathan: “Don’t say I never gave you anything.”

It cannot be denied that a lot of Nathan’s most humorous moments almost always had something to do with Chris Keller, and their friendship was played on quite a few times in the show. Chris Keller was a hilarious character himself, but Nathan’s reactions to him were great, especially when Keller randomly shows up at his front door. In Season Nine, right before he leaves for Europe, Nathan discusses with Haley her letting Dan stay in their house and unfortunately asks, “how much worse can it get?” resulting in a knock on their door and none other than Chris standing there. An exasperated Nathan then says, “Why do I say these things.”

Nathan: It’s fine. It’s just Dan Scott sleeping in my guest room, how much worse can it get?…Why do I say these things?”

Watching Nathan go from a cocky, self absorbed basketball player to an extremely caring husband and then father is one of the major reasons he became many One Tree Hill fan’s favorite character. Needless to say, Nathan and Haley are amazing parents who handle every situation together, and of course, it was Nathan faced by the dreaded “where do babies come from?” question by his son Jamie when Haley gets pregnant with their second child. Later, when Nathan explained it to Haley, it was hilarious and one of Nathan’s best and funniest parenting moments.

Nathan: “He caught me totally off guard. He was like a ninja. Like a three foot tall, where do babies come from ninja.”

Haley: “Where did you leave it?”

Nathan: “Kind of uncomfortable and confused. And that was just me. I just started babbling about the birds and the bees, and he was just sitting there looking at me like, ‘My dad was totally my hero until this very moment when I realized he’s actually a complete ass.'”

A lot of Nathan’s best moments of course have to do with Haley and all fans can admit their hearts pretty much melted with Nathan’s unbelievably romantic declaration to Haley. Nathan disappointed Haley (and fans) when it seemed he hadn’t really changed and wouldn’t admit to his basketball friends that he was on a date with her. But for him to admit that he wants to change and wants to change for her was a huge moment for Nathan’s character and of course one of the moments that began the Naley saga.

Nathan: “All right, I screw up a lot, all right… and being around you I just I don’t wanna be that guy any more.”

Haley: ‘Well, who do you wanna be Nathan?”

Nathan: “I wanna be somebody who’s good enough to be seen with you.”

Once Nathan and Lucas became closer, they were not only brothers but the best of friends, which led to great moments between the two. Many of Nathan’s funniest moments are underplayed because of his dry, sometimes sarcastic humor; however, the writers gave him an amazing line when they used his character to poke fun at their own show. When Lucas comes over to his house, Nathan told him he had a list of actors he wanted to portray him for Lucas’s film version of Ravens. After telling Nathan that Shia Labeouf is too old, Nathan slyly states, “Oh come on man. You’ve seen how old these actors are playing high school.” Of course, One Tree Hill‘s creator knew this was becoming an issue and decided to graduate the group and jump over the four years of college to land their characters at a more appropriate age to the actors.

Lucas: “Yes, I do. Hey, and uh, hate to break it to you, but Shia Labeouf? I think he’s a little too old to play you for high school.”

As mentioned, Nathan’s humor was subtle and dry and sometimes very quick and Dan Scott was often on the receiving end of some of his jabs. Nathan often doesn’t have time for dealing with his dad especially when he is already in a bad mood, which is the case with this quick yet hilarious one liner.

Nathan and Chris Keller definitely had some hilarious moments over the years, but season three’s episode, “How A Resurrection Really Feels,” had that come to a head when the two went on a road trip to play poker in order to win back Haley’s studio recording. Almost every scene they are in together is filled with funny exchanges, but fans know some of the best Nathan moments are when he is making fun of or pushing Chris around, including when he punches him in the face…multiple times.

Another of Nathan’s best qualities was that his character told it as it is and was not afraid to say so. After adding more characters into the opening and closing narrations of the show, Nathan was given this quote that has resonated with fans long after the show ended.

Brooke: “George Bernard Shaw once wrote: ‘There are two tragedies in life. One is to lose your heart’s desire. The other is to gain it.’ Clearly, Shaw had his heart broken once or twice.”

Nathan: “As far as I’m concerned, Shaw was a punk. Cause you know what? Tragedies happen. What are you gonna do, give up? Quit? No. I realize now that when your heart breaks, you got to fight like hell to make sure you’re still alive. Because you are. And that pain you feel? That’s life. The confusion and fear? That’s there to remind you, that somewhere out there something is better, and that something is worth fighting for.”

Nothing hit fans harder than the last episode of the show when Nathan reminded us all how much they had all gone through over nine seasons and we realized we too had invested nine years in One Tree Hill. For many who started watching the show as teens, they were then in their early 20s, reflecting back on their teen years and this quote hit extremely close to home.

Nathan:  “It’s the oldest story in the world. One day you’re seventeen and planning for someday. And then quietly and without you ever really noticing, someday is today. And that someday is yesterday. And this is your life.” 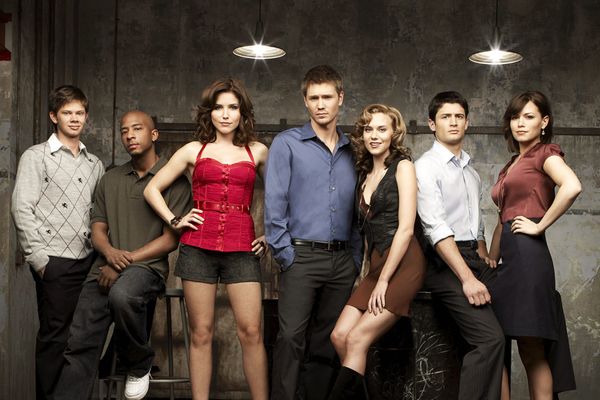