For nine seasons, One Tree Hill was one of the most popular series on television. With drama, betrayals, deaths and intriguing storylines, there was a lot for fans to get hooked on. Like any good teen drama, a large focus was on romantic relationships and there were many for a lot of the main characters over the course of the show. While it was inevitable for Peyton Sawyer to end up with Lucas Scott, it took quite awhile for the two to find happiness which meant a few other love interests for Peyton! Take a look back at Peyton Sawyer’s love interests ranked from worst to best:

When it comes to Peyton and Anna, Peyton was definitely more of a love interest for Anna than the other way around, but it was one of the few times the show actually introduced a gay character. Although Anna and Peyton’s friendship grew strong quickly, after she kissed Peyton, Anna found out that any additional feelings were not mutual. While Peyton did not feel the same way about Anna, she did stand up for Anna against homophobic remarks that came from Anna’s own brother Felix after he thought there was something going on between the two girls.

Fans were immediately introduced to Peyton Sawyer and Nathan Scott as a couple in the first episode of One Tree Hill, and from the beginning, it was not portrayed as a healthy relationship. They definitely looked good together but that was about where any positives in their relationship ended, and as it turns out they made amazing friends, until that little bump in the road when Peyton found out that Nathan and Brooke had once made a sex tape during one of her and Nathan’s many brief breakups.

In one of One Tree Hill’s strangest moments, Pete Wentz came on to the show to play himself and also act as a love interest for Peyton. There is no doubt that the whole thing was incredibly awkward as Wentz’s lack of acting skills made the chemistry fall completely flat, but there was also the problem that he was quite a bit older than Peyton who was still in high school. While One Tree Hill had some improbable storylines, this was also one of the worst as the likelihood of a musician from a major band taking time to pursue a high school girl made absolutely no sense at all. He was, however, a better much for her than Nathan because he shared her passion for music, and actually listened to her.

While most of Peyton’s other love interests were obvious, no one saw this coming. When Julian Baker showed up to Tree Hill to convince Lucas to turn his novel into a film, fans could tell something was off about him, but they never anticipated him to be a past love of Peyton. Not only were the pair in love, they were living together and building a life together in L.A. after Peyton turned down Lucas’s marriage proposal.

While there was no greater Tree Hill couple than Lucas and Peyton, there are quite a few fans who still think Peyton should have ended up with Jake Jagielski. For quite awhile the two fostered a friendly relationship, but the sparks were definitely flying, and finally they gave into their feelings when Jake returned to Tree Hill with his daughter and stayed with Peyton. The pair actually made a lot of sense together and it really seemed things were going their way when Peyton proposed to Jake and he accepted. Of course, everyone knew that, even though they worked well, it was never meant to be.

Although Lucas and Peyton had a very long road to happiness, from the very beginning they were destined to be together. It is hard to believe that for much of their six seasons on the show, they weren’t actually together as each went through other relationships, and Lucas even came close to marrying someone else. It was seemingly never easy for the pair, especially with a difficult pregnancy, but they finally found happiness with their daughter. While fans were not happy to see the two main characters leave, it was at least satisfying that they did so as a happy family. 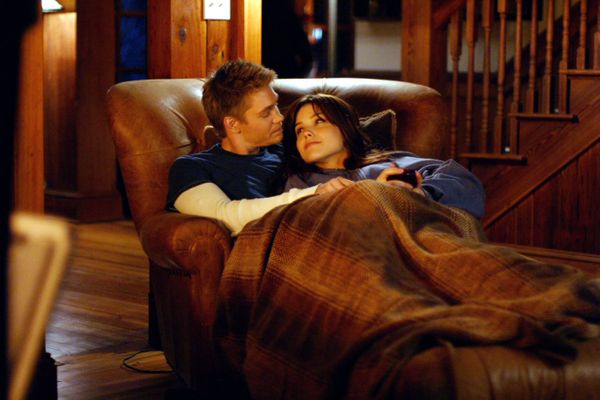