One Tree Hill was one of the best series on television during it’s nine-season run and at the center of all the storylines and drama was relationships. Family was the core of the show and as such there were many different relationship dynamics seen, which means all kinds of different parents, from the best to the very worst. Thanks to the time jump and character developments, fans saw some of their favorite characters go from being parented, to becoming parents themselves and we ranked most of the OTH parents from worst to best, check it out!

To the dismay of fans, we never got to see much of Peyton Sawyer and Lucas Scott as parents because their last episode is the same episode where their daughter Sawyer Scott is born. Given their love for each other and the way they were so excited for the arrival of their daughter, we can only assume they would be fantastic parents!

Nicki was perhaps the most infuriating character for so many reasons. The fact that she left Jenny and Jake right after Jenny’s birth is enough to solidify her as the worst parent on the show. Fans only had brief glimpses of Nicki, but she never gave us much hope as a parent, failing Jake’s test of what Jenny would need, causing drama at Haley’s party and threatening to take Jenny, only to get back at Jake and, of course, being the reason Jake has to go on the run and eventually exit the show.

Dan Scott had redeeming moments, especially in later years when it came to Jamie and Nathan, but the early years of the show cannot be erased. Dan easily became One Tree Hill‘s villain because of his treatment of Lucas, but also because of his bullying of Nathan, which leads to Nathan risking his own life with performance enhancing drugs. Dan was not a good father, and there were even times where he got in physical fights with both sons, and even though audiences warmed to Dan, his reputation of early seasons always haunted him.

Brooke Davis’s mother, Victoria, was never spoken fondly of and that impression certainly did not get better when we were finally introduced to her as a steady character in season five. It was made abunduntly clear she was not a good mother, nor did she want to be identified as a mother at all, and just wanted to be a business partner for Brooke’s company Clothes Over Bros. On numerous occasions she went out of her way to make sure Brooke felt stupid, silly and not loved, and although she came around a little bit, the illusion of a better Victoria Davis was shattered when she ruined Brooke’s company and forced Brooke to walk away. We will also never forget the heartbreaking episode where Victoria told Brooke she never wanted to be a mom, and resented Brooke for taking away her dreams of running her own business, causing Brooke to state, “Congratulations, Victoria, now you have a company and no daughter. You got your dream.”

Fans loved Clay Evans, and with good reasons, he was perhaps the best cast addition following the exit of Lucas and Peyton, but given the fact that for the majority of his story we weren’t even aware he is a dad, he doesn’t land too high on the good parent scale. Although Clay is completely loving and accepting of Logan and vice versa after they meet again, that doesn’t erase the fact Clay blocked out his own son following the death of his wife and Logan’s mother. His experiences as a young child landed him in therapy at a very young age, and that definitely comes back to the death of his mother and subsequently being abandoned by Clay.

Even at her worst, it was hard to hate Deb Scott, but when it comes down to it, she really wasn’t a great mother. In the beginning she was rarely seen because she was often too busy with work and only when she spent more time with Dan did things really go downhill for her. There is a reason Nathan opted for emancipation completely instead of just living with his mother, and as Deb spiralled into an alcoholic and prescription pill junkie, Nathan had to take care of her more than she ever did for him. Although she eventually became Jamie’s nanny and redeemed herself with Nathan, she also began dating one of his best friends.

Larry Sawyer was away so often that two actors actually played the character and it never really mattered. Larry doesn’t land too high on the best parent side of things for One Tree Hill because he was away pretty much all the time for work, leaving Peyton to her own devices and making her pretty vulnerable, especially when she was stalked and attacked by a psycho in her own home while he was away. When he was around, however, Larry was a great dad, who was always there for his daughter and for Brooke in her absence of parents. We will always have his iconic line after sending Fall Out Boy’s Pete Wentz away, “Yeah, well, now he’s Pete from Get-Out-Of-Town-Boy.”

After so much time in a rocky relationship and years of Brooke just wanting to be a mom, the pair finally became parents in season eight after welcoming twins, Davis and Jude. As to be expected, Julian was a great and loving father, but there was that mishap where he was so overwhelmed with work, he accidentally left Davis in the car. This creates extreme guilt for Julian and lots of tension between himself and Brooke, and while Davis was completely unhurt, it definitely wasn’t a great parenting moment.

In their brief appearances on the show, Haley’s parents, Lydia and Jim, were fantastic. Although for the first while Haley only talked about her large family, fans finally met her parents in season two when Nathan and Haley go to her house to ask permission to be married. It was one of the funniest sequences on the show as they argued about Haley being pregnant, and finally giving their blessing for them to be married. They also were Nathan and Haley’s biggest supporters at their shower, even when Deb criticized and blamed them for allowing Nathan and Haley to ruin their lives. While Lydia came back in season seven, but Jim did not, they remain one of the best sets of parents on the show.

If we had our way Jake Jagielski would have been on the show until the end. One of the best and most endearing twists to the show was when Jake revealed to Lucas that the reason he is away from practice or late is because he is a 16-year-old single father to his daughter, Jenny. The end of the episode sees Jake singing a lullaby to Jenny and, if it wasn’t obvious before, then we definitely knew he is a fantastic father, despite the challenges. Jenny was Jake’s whole life which he made clear by uprooting his whole life and running away in order to keep her safe from Nicki.

There was absolutely no questioning that Brooke Davis was going to be a fantastic mother! Brooke’s decision to adopt seemed sudden at such a young age, and although she got turned down, she did get temporary custody of a little girl named Angie who needed a home in the U.S. while awaiting a heart operation. She then got another chance at motherhood after taking in troubled teenager Sam, and depsite being close in age, Brooke was a fantastic maternal figure. Then, of course, came the twins, Jude and Davis. She undoubtedly is one of the most loving and attentive mothers on the show.

Nathan Scott’s character development over nine seasons of One Tree Hill was the most impressive out of the entire cast. He was arguably the most beloved character on the series by the end and his scenes with his son Jamie and later his daughter Lydia are some of the best. Despite him being an amazing father for the majority of the show following Jamie’s birth, we can’t forget his time ignoring his family and drinking following his accident that almost ended his basketball career. No parent is perfect, but Nathan came pretty close a lot of the time.

Keith Scott was a fantastic parent, and despite never meeting his own child, Lily, he was one of most fantastic parental figures during the time on the show. Due to the lack of Dan in Lucas’s life and Keith’s undying love for Karen, he had a big hand in helping to raise Lucas, with fantastic results. Lucas was a mature, hard-working and level-headed teenager thanks to both his mom and Uncle Keith. Keith was understanding, patient and wise yet could be stern when needed, which made him even a better father figure to Nathan in his time of need.

Haley James was always the mature and responsible one, so it isn’t surprising that she had no problem becoming a fantastic mother. She had the perfect handle on raising Jamie and pursuing her own career, and Haley and Nathan’s skills in parenting were reflected in what an amazing little boy Jamie was. Even in her worst times, her children were always her first priority and it was actually more convincing to see Haley as a mother and teacher than as a high school student.

There wasn’t a chance the top spot wasn’t going to go to everyone’s favorite TV mom, Karen Roe. Karen was an unbelievably strong and successful woman who made it clear she did not need a man in order to run a very successful business while raising a smart and responsible son. She was the perfect balance between Lucas’s best friend and his mother, and she was always there to guide him through the tough times and celebrate with him in the best. 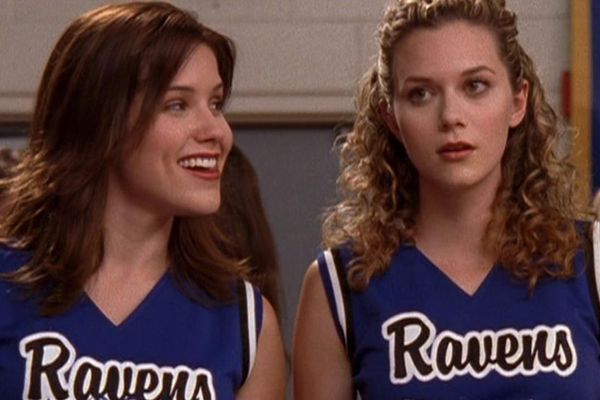