Sometimes it feels like we’ve seen every single picture of the royal family that’s out there, but that just isn’t the case. There are a number of photos that most people aren’t familiar with, which is why we’ve collected 40 rare pictures of the royal family for everyone to enjoy!

Kate was often seen out and about in London following her and Prince William’s university graduation. She was often seen sporting a skirt, tights, a sweater and a pair of suede boots. It became her signature look!

Princess Diana attended the opening of University College Hospital’s Neonatal Intensive Care Unit in 1982 in style. She looked lovely and sophisticated in this beautiful blue velvet dress which she paired with a feathered hat.

38. Prince Charles in an Interview with Press Association Court Correspondent

This picture is from 1977. Prince Charles was having an interview with Press Association Court Correspondent Grania Forbes about the Silver Jubilee Appeal, which he launched so that Britain could have an opportunity to show its gratitude for his mother’s dedicated service as reigning monarch.

Elizabeth was just 25 when she ascended the throne following her father George VI’s death in 1952 and her coronation took place in 1953 after 14 months of planning. This is one of her coronation portraits. She was just 27 years old.

Back in 2006, Middleton attended a launch party for a new exclusive shop on King’s Road. Her style was very different back then and was much more girly than it is now. The floral dress, the matching purse, and the light pink velvet jacket definitely have a very youthful vibe.

35. William and Harry with Charles

This picture of Prince Charles with Prince William and Prince Harry was taken back in 1988 when Charles and Princess Diana were still married. They all look so young and a picture like this really shows how much Charles has always loved his sons.

34. Princess Diana as a Child

Princess Diana was only two in this photo. It was taken at Park House, Sandringham, Norfolk, which is situated on the Queen’s country home, Sandringham Estate. The home her family lived in was leased from Queen Elizabeth. Because of her close proximity to the royal family and her aristocratic lineage, she grew up playing with Prince Charles’ younger brothers, Andrew and Edward.

33. Queen Elizabeth during Her Christmas Broadcast – 1953

In 1953, Queen Elizabeth recorded her Christmas broadcast for the radio in Auckland, New Zealand, at Government House. At the time, she and Prince Philip were at the start of a six-month tour of the Commonwealth on the royal yacht Britannia.

32. Kate Middleton at Her University Graduation

In 2001, Kate Middleton met Prince William at the University of St. Andrews in Fife, Scotland. They were living in the same dormitory during their first year, and they had several classes together as well. In 2005, they both graduated from St. Andrews. This is a picture of her on graduation day.

Prince Philip was incredibly handsome as a young man. Here he is at Gordonstoun, a boarding school in Elgin, Scotland, in 1939, where he spent the majority of his high school years. This was just before he went off and enrolled at the Royal Naval College, Dartmouth.

30. Diana at Imperial Polo Match at the Guards Polo Club in 1981

Lady Diana Spencer watched her fiancé, Prince Charles, at the Imperial Polo Match at the Guards Polo Club in Windsor in 1981. She looked so fresh-faced in her beautiful pink dress. Even before she was a royal, she was already making a statement with her fashion.

It certainly looks like Prince Charles is ready for war! Here he is in 1975 taking part in a commando course in Lympstone, Devon. That same year, he went on to become colonel of the Welsh Guards. He’s had quite the military career — that’s for sure!

28. When Queen Elizabeth Was a Mechanic

During World War II, Elizabeth registered with the Labour Exchange and trained as a driver and mechanic. In this picture, she is receiving vehicle maintenance instruction on an Austin 10 Light Utility Vehicle. During the war, she also learned how to change a wheel, deconstruct and rebuild engines, and drive ambulances and other vehicles.

In May 2007, Middleton attended the Badminton Horse Trials with Prince William’s close friend, James Meade. This was after she and William broke up after nearly five years together. One of the reasons for the breakup was that he wasn’t ready for marriage and had been spotted at various clubs acting like he wasn’t in a relationship. Her presence at the Badminton Horse Trials was evidence that things between them weren’t necessarily over.

Like all teenagers, the young prince had an awkward phase. Back in 1999, he was still growing into his looks – and straightening his teeth! At the Christmas Church service on Sandringham Estate, he was seen with braces.

In 1989, Princess Diana made an official visit to Indonesia where she stopped at Sitanala Leprosy Hospital and met with patients. In this picture, she’s outside the hospital playing a game of boules.

During her brief breakup with Prince William, the brunette beauty didn’t waste any time moping and made sure to get herself out of the house and socialize. She attended the Young Stalin book launch with her sister Pippa in this lace dress and we think it is safe to say that pictures like this probably made William regret his decision to end the relationship.

It was pretty obvious even when Prince Harry was a child that he would grow up and join the military. Here he is photographed at the age of eight in Hanover, Germany. He was spending a day at the Light Dragoons in military garb. Such a cute little soldier!

Four-year-old Elizabeth attended the Royal Tournament at Olympic, London, in 1930 with her grandmother, Queen Mary. She looks really serious in this photo, but still adorable, especially with that little jacket/dress combo.

The British royal family has always enjoyed taking their winter vacations at the resort of Klosters in Switzerland, and in 1968, Prince Charles took Princess Diana on a skiing trip there. She looks like a natural on skis and knows just how to dress for the slopes!

Here the Prince of Wales is with his eldest son Prince William at Aberdeen Airport in Scotland in 1984. It looks like a pretty sweet moment between father and son. He’s clearly explaining something to young William.

Before she married into the royal family, Kate dressed in a slightly more risqué fashion. For a 2008 Halloween party, she rocked this little black sparkly dress with a cape and her signature suede boots. We’re pretty sure we wouldn’t find her dressed in a sexy Halloween costume like this now!

This picture is from Queen Elizabeth’s 14th birthday when she was still a princess. She and her family were spending time at Windsor Great Park, the royal family’s traditional private hunting estate. She spent the day horseback riding and picking daffodils.

17. Prince Charles on His 7th Birthday

Prince Charles can be seen here in his kilt of Balmoral tartan on his seventh birthday. He looks pretty serious and super formal in his little outfit, but he is still really cute.

In 1939, Prince Philip joined the British Royal Navy as a cadet after leaving Gordonstoun School. He was promoted to Lieutenant in July 1942 and that October he was appointed to the V and W-class destroyer and flotilla leader HMS Wallace. He was in Tokyo Bay when the Japanese surrendered and is one of the few royals to serve in a combative role.

In 1983, Princess Diana went on tour with Prince Charles in Canada and she made sure to do so in style. Here is she is at Heathrow Airport following the tour, looking as stylish as ever in this blazer with a polka dot dress.

For his 18th birthday, this portrait of Prince Charles was commissioned. He’s wearing the Balmoral tartan in the picture, but it’s hard to see because he’s standing behind a big red chair. This would have been when Charles was in his last year at the boarding school Gordonstoun and then it was off to university.

Middleton was a regular at the Cheltenham Racecourse Festival before she married Prince William. In 2008 she attended in this navy trench coat with a black scarf, black tights, black suede boots, and a matching black fedora.

Many people aren’t aware that Prince Philip is actually an avid painter and loves to paint landscapes with oils. His most famous painting is arguably one of his wife, Queen Elizabeth, having breakfast. This picture is of Philip painting is from 1969.

Queen Elizabeth’s coronation took place on June 2, 1953, at Westminster Abbey and was the first to ever be televised. Two hundred and seventy-seven million people tuned in from around the world. In this picture, Queen Elizabeth is riding along in the coronation coach.

Before the handsome prince began dating Princess Diana, he briefly dated her older sister, Lady Sarah Spencer. Here they are in 1977 attending a polo match together. Prince Charles was representing Young England in the Wills International Polo Match at Windsor Great Park.

This photo is from 1947 when Prince Philip, then known as Lieutenant Philip Mountbatten, was engaged to Queen Elizabeth, who was then just a princess. He always looked so serious, almost angry! But, wow, he was still quite the specimen! Elizabeth was one lucky lady.

For his first day of kindergarten, Prince Harry looked regal in royal blue. The whole family came with him on his first day of school – even Prince William! Harry was quite possibly the cutest kid ever with his adorable mane of strawberry blond hair and his Thomas the Tank Engine bag.

This picture is from Queen Elizabeth’s tenth birthday when she wasn’t yet a princess. Her uncle, King Edward VIII, was still on the throne. It was at the end of 1936 that Elizabeth’s father, the Duke of York, ascended the throne, becoming King George VI.

Diana and Prince Charles did a tour of Nigeria in 1990. She arrived at the airport in Lagos, the country’s capital, in style. She wore this green and white Catherine Walker outfit with a Philip Somerville hat.

4. Prince Philip in the Full Dress Uniform of Admiral of the Fleet – 1961

After completing his A-levels, Prince Charles decided to enroll at Trinity College, Cambridge, in 1967 instead of joining the British Armed Forces. There he studied anthropology, archaeology, and history. In 1970, he graduated with a Bachelor of Arts Degree and officially became the first heir apparent to graduate from university.

2. Kate in Jordan as a Child

In 1984, Kate’s family moved to Jordan. She was two years old and her sister Pippa was eight months old. Her father, Michael Middleton, was a manager for British Airways at the time and he was working for the company in the Jordanian capital. The family only stayed in Jordan for a few years and then returned to England in September 1986.

This family portrait of Prince William with Princess Diana and Prince Charles is from March 1983 at Kensington Palace. It’s a pretty sweet picture. Charles and Diana look like they are happy and in love and William seems content as well. It’s the perfect family picture. 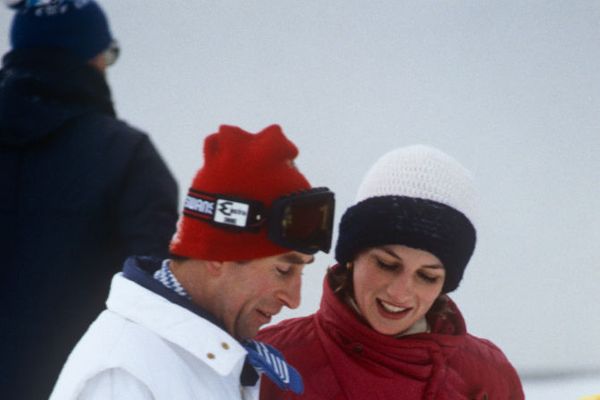 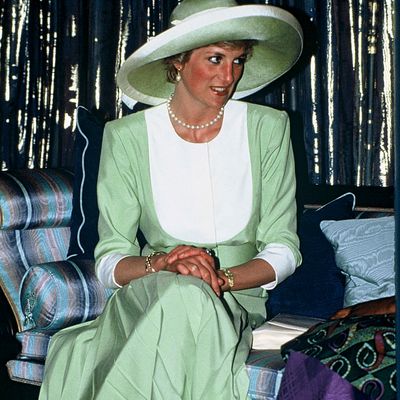