In this picture, the royal couple was ending their tour of Australia in Melbourne. Diana seemed particularly happy as she donned this red dress with blue polka dots and waved to the crowd as she boarded the plane. She was clearly a hit with Australians.

In 2011, the engaged couple returned to the University of St. Andrews, their alma mater, for its 600th-anniversary celebrations. The two met there in 2001 when they were both living in St. Salvatore’s Hall and studying Art History. A romance between them began to blossom in 2002 after Kate took part in a fashion show where William saw her wearing a see-through dress.

The royal couple attended Rupert Soames 1988 wedding together in style. She looked stunning in this black and blue outfit while Charles looked dapper in his morning suit. Based on their body language, things seemed to have cooled off between them at this point.

In 2005, Prince William and Kate Middleton graduated from the University of St. Andrews. This picture is from their graduation day. Kate looks like she is madly in love while William looks so dashing. We can thank the Middleton family for this photo! It is from their family photo album.

The year 1952 was an important one for Elizabeth – she became the Queen of the United Kingdom and Philip became her consort. This picture was from that time period, which is why she’s wearing a crown and a sash.

The Duke and Duchess of Cambridge attended the wedding of Laura Bechtolsheimer and Mark Tomlinson in Arose Switzerland in March 2013. The Duchess looks absolutely lovely in this picture with her perfectly coordinated brown hat and a beige coat.

During their tour of Italy in 1985, Diana and Charles traveled to Sardinia where they received a warm welcome, as hundreds of cheering schoolchildren greeted them and waved British flags. Diana was clearly the star of this show. She wore this pale blue Jan van Velden suit and a John Boyd hat and looked absolutely beautiful.

Here Prince Philip and Queen Elizabeth are in 1951, a year after welcoming their second child, daughter Anne. Their eldest son, Prince Charles, is sitting next Elizabeth and Anne. It would be several more years before they welcomed their younger sons, Prince Andrew and Prince Edward.

During their three-week tour of Australia and New Zealand, Prince William got into the cockpit of a World War I Sopwith Pup single seater biplane at the Omaka Aviation Heritage Center while they were making a four-day stop in New Zealand. It looked like Kate was having a really good time!

During their six-week Australian tour in March 1983, the couple climbed Ayers Rock, which is now called Uluru.  Here they are walking around the massive sandstone rock formation together. Diana looked lovely in this white dress with flats.

Prince William and Kate Middleton never share any affection for each other when they are in public, which is why this picture from the 2012 Olympic Games is so special. Here they are embracing each other as they cheer on Britain during the track cycling finals.

In 1985, Princess Diana and Prince Charles did a tour of Italy with their two sons, Prince William and Prince Harry. In this picture, they are traveling by gondola along the Grand Canal without their children and both of them seem at least somewhat happy.

In 1953, the royal family was a family of just four! Here Elizabeth and Philip are at Balmoral Castle with their two eldest children, Prince Charles and Princess Anne. It’s a pretty formal looking family portrait. Charles looks so young and timid!

Prince William and Duchess of Cambridge attended the Commonwealth Day service in 2016 in style. She rocked this gray hat by John Boyd with a gray coat dress by Erdem and matching Rupert Sanderson heels. Her coat had quite the pattern!

The Prince and Princess of Wales did a three-day royal tour of Cameroon in March 1990. In this picture, they are watching a dancing display in Bamenda. It is clear in this photo that the royal couple is no longer as close as they once were.

Queen Elizabeth’s coronation was in 1953 and this is a photo from the celebration. She and Prince Philip were on the balcony of Buckingham Palace with their children as they waved to the crowds. It was a big day for the royal couple.

The couple – who were engaged at the time – attended a service of dedication for a new RNLI lifeboat at Trearddur Bay Lifeboat Station in Anglesey, Wales, in February 2011. They had been keeping a low profile since they announced their engagement, so this appearance was a big deal and one that the town was anticipating. William and Kate didn’t disappoint!

During their marriage, Prince Charles and Princess Diana visited Australia three times – once in 1983 and then again in 1985 and 1988. In 1985, the royal couple made a visit to Victoria to celebrate the state’s 150th anniversary and while there they attended the Melbourne Cup. In this picture, they are in the Government House in Melbourne, Australia.

Following the earthquake in Christchurch in 2011, the couple met with the deputy High commissioner Belinda Brown at the New Zealand High Commission in London to sign the book of condolences in memory of those who lost their lives in the earthquake.

The Queen presented her husband with a polo trophy at Windsor Great Park in 1961. These two certainly weren’t into any sort of PDA. The way she presented the trophy seems formal. By the time Prince Charles married Lady Diana Spencer, the two were able to show a little more affection than this!

In 1987, Diana presented Charles with a runner’s up medal at the Guards Polo Club in Windsor and the two shared a kiss. Interestingly, it was only a year earlier that Charles had begun an affair with Camilla Parker Bowles. Maybe that’s why the kiss here seems so lackluster.

The newly married couple attended the Derby Festival at Epsom Downs Racecourse in June 2011. Kate looked elegant in an off-white fitted jacket with a white dress underneath. She accessorized with a cappuccino-colored hat and a pair of nude pumps. Prince William went all out and wore a top hat and tails.

The couple became engaged in 1946, but officially announced their engagement in July 1947. Here they are announcing their engagement at Buckingham Palace in London. They look so young and stylish – and in love!

The royal couple attended the Barbican Arts Centre in London in 1982. At the time, Princess Diana was pregnant with William. We love that you can see Diana just staring at Charles with a really loving expression. This was obviously the brief period where the two were quite happy together.

In March 2007, Kate Middleton accompanied Prince William to The Cheltenham Festival. It was just a month after this that the couple broke up. The reason for the split – William was reportedly acting like a single man and Kate wanted more of a commitment from him. The break didn’t last long and by the summer they were back together.

This is another photo from the royal couple’s engagement announcement. This is a pretty sweet photo. Look at the way Prince Philip was looking at Queen Elizabeth and the way that she looked back to him. Now that’s true love!

The Prince and Princess of Wales went on a ski holiday to Vaduz, Liechtenstein, in January 1985. She arrived for the photocall in style in this red one-piece snowsuit from Harrod’s in London while he looked charming in his blue and white snowsuit. They certainly looked good together!

Prince William and Kate Middleton watched a rugby match between England and Italy at the RBS Six Nations Championship at Twickenham Stadium. The two looked like they were trying to keep a low profile, but the press wouldn’t have it. They wanted to photograph the most famous couple in the world.

After their wedding, the royal couple attended the launching of the RMS Caronia in Clydebank. While there, the couple stopped by the town hall to receive the town’s wedding present that they gifted the couple – an electric sewing machine!

In 1985, the Prince and Princess of Wales visited St. Peter’s Basilica in Rome during their tour of Italy. Before this, the royal couple had a private meeting with Pope John Paul II. Diana dressed to impress with this pink polka dot dress.

This picture was taken just three weeks before the couple’s wedding. They were visiting East Lancashire in north-west England where they visited Aldridge Community Academy (DACA), unveiled a plaque and viewed a range of outdoor sports activities.

In 1957, the royal couple visited U.S. President Eisenhower and his wife, Mamie Eisenhower, in Washington, D.C. In this picture, Elizabeth and Philip were at Union State, waving to the crowds, as they left for New York City.

During their joint tour of France, the couple attended a banquet at the Palais De L’Elysee in Paris, which was hosted by President Francois Mitterrand and his wife Danielle. In this picture, it seems the two were caught in some sort of misunderstanding.

The day after their extravagant wedding, the two were seen walking hand in hand from Buckingham Palace to catch a helicopter that was waiting on the palace grounds to take them for a private weekend away in the U.K. The two look surprisingly relaxed considering that it was their wedding the day before!

Queen Elizabeth and Prince Philip were married at Westminster Abbey in November 1947, just four months after they announced their engagement. Here the two of them are just after their wedding. They both look really smitten!

During their tour of Australia in 1983, the royal duo visited victims of bushfires in Cockatoo, Australia. Diana dazzled in this lovely purple gown and it was obvious that these bushfire victims were happy to see the young, beautiful princess.

Prince William can be seen here giving Kate Middleton a hug after he played a rugby match at Eton College back in March 2006. Kate attended the match with her sister Pippa, who can’t be seen in this picture because the couple is blocking the view.

Queen Elizabeth and Prince Philip looked like the perfect royal couple when they visited Trinidad and Tobago in 1957. She looked incredibly stylish while he looked dapper. They would have been married ten years at this point.

The royal twosome are pictured here attending a traditional tea ceremony at Nijo Castle in Kyoto, Japan, in 1986. At this point, Diana was well on her way to becoming a fashion icon. She looked absolutely stunning in this red and white polka dress with a matching red hat.

In March 2008, together they took a ski trip to the Swiss resort Klosters, which is where his parents used to ski as well. The two are pictured here on a T-bar looking really serious. Maybe they knew that there was someone there photographing them? 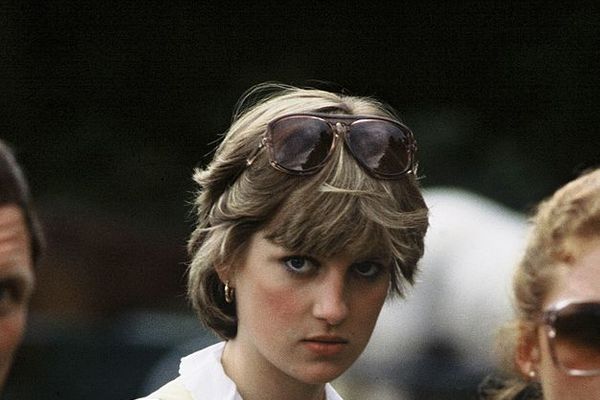 Rare Pics Of Diana, Kate & Meghan Before They Were Royals 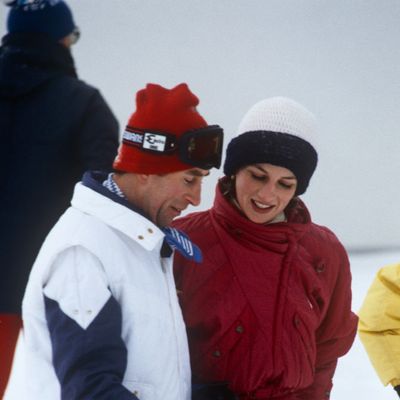