Donald and Melania Trump are now one of the world’s most famous couples. What most people don’t know about them, however, is that their relationship dates back all the way to the late ’90s! We’re taking a trip down memory lane, so join us as we look at 12 rare photos of Donald and Melania from more than a decade ago!

In 2004, the couple promoted The Apprentice at the Gotham And Los Angeles Confidential Magazine Anniversary Party. Who knew that Melania once had dark brown tresses! Her hair almost matches her black dress!

Melania and Donald attended the world premiere of Citizen Change Political Art Exhibit Campaign in 2004. Melania doesn’t seem to do casual too much these days, but she did then! She’s wearing a Mickey Mouse t-shirt!

In 2004, they attended the NBC Summer Press Tour Party at Universal Studios. The former model looked super gorgeous in this sparkly ivory and gold slip dress while Donald, as always, looked dapper in a suit and tie.

The couple attended the Primetime Emmy Awards together in 2004. It was a big night for Trump. He had been nominated for an Emmy for Outstanding Reality-Competition Program for The Apprentice, but he didn’t win.

Melania and Donald attended the Badgley Mischka Fall 2004 Collection where they sat front row. The two look surprisingly serious. Fashion shows are supposed to be fun and these two do not look like they are having a good time!

For the 2004 Vanity Fair Oscar Party, Melania attended with Donald and she went for a super sexy look. She wore this floor-length ivory slip dress, which featured a thigh-high slit and some lace detailing above the waist.

In January 2004, they attended the NBC All-Star Party together, looking like the ultimate power couple. Melania showed off her perfect curves in this tight metallic dress while he was business as usual in a suit and tie.

The couple attended the premiere of Something’s Gotta Give in New York City in December 2003. Melania sure looks like she’s dressed for winter! She’s wearing pants, a turtleneck and a gorgeous fur coat. The coat must have been a gift from Trump!

Melania and Donald attended the fashion show for Oscar de la Renta’s Spring Collection together in 2003. It was another glamorous event for the wealthy couple and Melania made sure to dress in a simple, but sexy way with her pencil skirt and tight pink top.

At the 2003 MTV Video Music Awards, Donald and Melania were in attendance. She wore this peach-colored, flapper-inspired dress while Trump looked as though he sported a different hair color. Is it just us or is his hair a reddish-brown?

Here Donald Trump and Melania Knauss are with Frederick Fekkai at the fashion show for the LUCA LUCA Fall 2003 Collection. They certainly used to live a really relaxing life, didn’t they? It was all fashion shows and movie events! Not a bad life at all!

The couple showed up on the red carpet for the Film Society of Lincoln Center’s Gala Tribute to Susan Sarandon. These two certainly used to love attending events together. For Trump, there is no greater accessory than a beautiful woman on his arm! 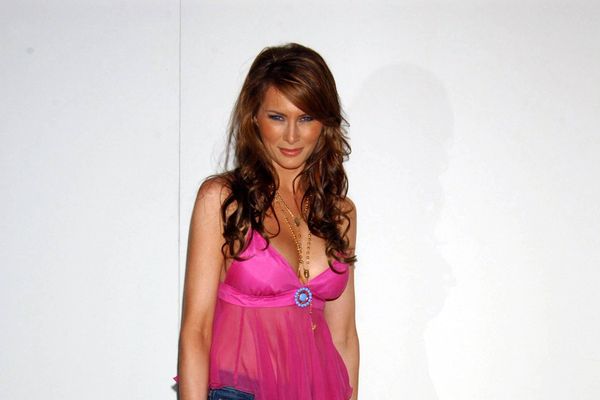 Rare Photos of Melania Trump From Before She Was Famous