Rare Photos of Melania Trump From Before She Was Famous

Melania Trump is now one of the most famous women in the world, but she still, to this day, does her best to keep a low profile. Because of this, there’s always been an air of mystery around her. Technically, she’s been a celebrity for years, but most people still don’t know a lot about her. We have collected some rare pictures from when Melania wasn’t very famous – check it out:

During fashion week in 2003, Melania attended the Luca Luca show. She wore this baby blue sateen dress, which doesn’t flatter her figure the way it should. With her slender physique and slight curves, Melania has one of the most enviable figures ever and she deserves a dress that will really show it off.

The current First Lady of the United States found herself on the social scene in New York City on a regular basis back in the day. In 2001, she attended an American Cancer Society gala fundraiser event, which honored Regis Philbin.

The model showed up at the Film Society of Lincoln Center Honors for Susan Sarandon in 2003 in this white and pink figure-hugging gown with matching pink shoes. The dress definitely shows off her enviable figure, but it’s not as sophisticated as the dresses we see her in now.

In 2003, Melania wore this aqua knee-length dress to the premiere of the film Legally Blonde 2: Red, White and Blonde. It was the perfect dress for the occasion – light, flowy and slightly conservative with the high neck.

Back in 2002, Britney Spears opened a restaurant in New York City called Nyla, and Melania was one of the people who attended the restaurant’s opening. She showed up in style. She wore this white slacks with a red and pink halter top and red strappy heels.

For the Victoria’s Secret Fashion Show in 2003, the future First Lady wore a gorgeous Jacquard coat that had a furry trim. The chandelier earrings made the outfit look even more luxurious. This is definitely a sophisticated look.

The brunette beauty was at the premiere for Murder By Numbers in 2002. She attended the premiere with her boyfriend at the time (and now husband) Donald Trump. Dating a celebrity definitely has perks – and this was one of them!

Melania attended the Zac Posen fashion show in 2004 alongside her mother. She donned a leather pencil skirt with a silky cleavage-bearing top. The lucky ladies had front row seats at the show, which is pretty sweet!

In 2004, the Slovenian model showed up at the Oscar de la Renta fashion show in style. She rocked a white dress with an aqua coat. The coat is gorgeous and very fashionable and her hair had definitely been dyed a few shades darker, which is such a good look.

The former model attended fashion week in 2002 with her millionaire boyfriend. Here the two of them are at the Luca Luca Fall/Winter show. She looked sleek in this black knee-length dress, which featured lace trim and a turtle neck, and a cream-colored coat.

Melania attended the Chanel fall-winter fashion show in 2004. At the time, she was on the hunt for a wedding and dress, but she didn’t find it there. To walk down the aisle in 2005, she wore a strapless Christian Dior gown that was made from roughly 300 feet of duchess satin, but for the evening reception, she changed into a Grecian-style Vera Wang dress.

Who knew that Melanie was a fan of Sex and the City! She must have been because she attended the season four premiere of the show with her rich boyfriend; he appeared in an episode of season two called “The Man, The Myth, The Viagra.”

For the Jean-Paul Gaultier fall-winter fashion show, Trump went for a rather girly look. She wore this flowy yellow top with white trousers. She certainly seemed to love fashion week – she went to so many fashion shows that it is almost impossible to keep count!

Melania attended the NBC All-Star Party with her soon to be husband in this sparkly slip dress, which really seemed to showcase her amazing figure. Also, she decided to dye her hair a lighter shade of brown again, which really suited her.

The Slovenian-American model found herself out on the town in 2001 in New York City. She was at the restaurant opening for Man Ray. She went for a simple look with this white blouse and slacks with a jeweled belt.

At the Marc Jacobs fashion show in 2004, the model went for a fun and flirty look. She rocked a pair of dark jeans with a bright pink cleavage-baring tank that hung loosely around her waist. She certainly knows how to do casual well!

Back when she was just a model dating a millionaire, Melania Knauss attended the 13th Annual Women of the Year Luncheon at the Pierre Hotel in New York City. She rocked a black blouse and black slacks with a beige coat and a beige purse.

The beautiful brunette attended US Weekly’s Young Hollywood Hot 20 in 2005 in a pretty pink top and a pair of white pants. She was a newlywed at this point. Nine months earlier she married the real estate mogul.

Melania was always a fixture at New York Fashion Week! Here she is back in 2002 at the Luca Luca Spring 2003 Fashion Show. While Melania usually looks impeccable when she’s out, these sparkly peach-colored pants weren’t the best choice.

Melania was pregnant with Baron at the Police Athletic League’s 17th Annual Women of the Year event in 2005, which is why she covered her ivory dress up with a brown fur shawl. She definitely has that healthy pregnancy glow! 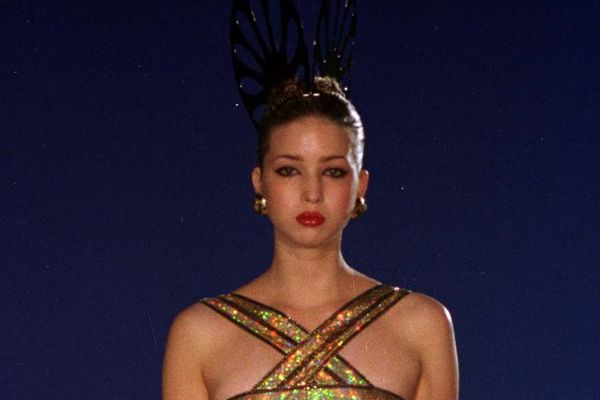 Rare Photos Of Ivanka Trump: Pictures From Before She Was Famous