Rare Pics Of Meghan Markle Before She Was A Royal

Long before Meghan Markle landed the most eligible bachelor in the world, she was trying to make her mark in Hollywood. She wasn’t as well known then, so there are plenty of photos of her at various celebrity events that most people have not seen. Here are 31 of them:

The television actress was front row at the Tracy Reese fashion show in 2013. She rocked this colorful floral dress, which we assume was by the designer. It looks like she was pretty focused on the runway. Maybe she saw something that she really liked!

Meghan attended the Mercedes-Benz Fashion Week Spring 2014 show in September 2013. In this photo, she is arriving for the Marchesa runway show. She opted for a simple black dress with a gold clutch and black heels.

When Markle was just a struggling actress who wasn’t getting many roles in Hollywood, she was attending small events – like this one! Here she is at the DPA pre-Emmy Gift Lounge at the Peninsula Hotel in Beverly Hills picking up some swag.

Meghan attended the season 5 premiere of Suits along with her castmates at the Sheraton in Downtown Los Angeles. She looked lovely in this black skirt and sweater combo, which she paired with a killer pair of heels.

In 2013, the former television actress attended the Entertainment Weekly Pre-SAG Party, which was hosted by Essie and Audi and held at Chateau Marmont. The rising star looked super gorgeous in this multi-colored gown.

In 2011, Markle attended the Summer 2011 TCA Party with the cast of Suits, which must have been a pretty big deal for her. Prior to this, Markle hadn’t had any big breaks, so this was a real first for her.

The Suits actress arrived at the 13th Annual InStyle And The Hollywood Foreign Press Association’s Toronto International Film Festival Party with her costars from Suits. She rocked this simple mauve dress. Her style has certainly evolved since!

At the 2nd annual Novak Djokovic Foundation Gala Dinner, Markle was all dolled up in this beautiful black cocktail dress. She made this appearance following her divorce from Trevor Engelson. She clearly wasn’t wasting any time being sad!

Meghan joined the cast of Fringe during season two. She played FBI agent Amy Jessup, an attractive, brash and quick-witted junior agent. She was only on the show for two episodes before she completely disappeared without a trace.

The Suits star opted for a white and lacy dress at the SELF Rocks the Summer Party in 2013. While she looked good, it wasn’t her best look. The beige straps underneath the dress made it look just a little cheap.

At the Wes Gordon runway show in 2015, Markle was front row. She wore this pale blue high-waisted skirt with a white top and clutch, as well as a cream-colored faux fur coat. It was a pretty sophisticated look.

Being on a successful show meant that Meghan would attend many different entertainment events. Here she is in 2012 at the after USA Network Upfront after-party where she was photographed posing with her costars from Suits, as well as on her own.

It doesn’t really matter what Meghan is doing – she always looks beautiful. However, at the NBCUniversal Cable Entertainment Upfront in 2014 her dress and shoe combo wasn’t the best. This simple white dress would have looked better with simple shoes.

In 2016, the Suits actress, who was an ambassador with World Vision, traveled to Rwanda to help with a clean water campaign. She visited the Kabeza Borehole, which provides drinking water for more than 130 families in the Gatsibo district. Here she is posing with some members of the community.

In 2014, Markle participated in DirecTV’s 8th Annual Celebrity Beach Bowl. This is where she met one of her closest friends, Serena Williams. On The Tig, Markle wrote, “We hit it off immediately, taking pictures, laughing through the flag football game we were both playing in, and chatting not about tennis or acting, but about all the good old fashioned girly stuff. So began our friendship.”

Following her divorce from Trevor Engelson, the actress was clearly keeping busy. Here she is at the Gala Tribute for Cate Blanchett, which was held during the 51st New York Film Festival. The green dress was definitely a bold choice!

Meghan was out and about in New York City for Celebrity Candids in this photo. She was such a natural. How many other people can dress to the nines like this, pose for photographs and look completely comfortable?

The television actress was in the Hallmark movie When My Sparks in 2014. She played a journalist who returns to her hometown for an assignment and realizes that the life she left behind along with her ex is what she wants.

Who knew that Mandy Moore and Markle were friends? Here they are back in 2006 at The Pink Elephant Night Club in Southampton. The two met through Trevor Engelson, Markle’s first husband. He was directing a film Moore was in called License to Wed, so she and the future Duchess became friends.

Meghan arrived at the GH Men of the Year Party at Chateau Marmont in West Hollywood in this dark orange dress, which was a little too loose and drape-like. In spite of this, she still looked stunning with her flawless makeup and perfectly coordinated accessories.

Markle attended Prada’s The Iconoclast Party in New York City in 2015. The actress was decked out in this Prada ensemble. Although the patterns that she was wearing slightly clashed, Markle made the whole thing look chic.

The actress-turned-duchess was photographed out and about the Lincoln Center in New York City in 2013. She was attending New York Fashion Week in style in this green suede dress with a pair of strappy gold heels.

This photo is from 2010 at the Some Kind-a Gorgeous Style and Beauty Lounge. Even though Suits wasn’t yet on the air, Megan had already been cast on the show at this point. It would be almost a year later that the show would finally debut on USA Network and make Meghan a star!

The Suits star was at Miu Miu Women’s Tales 7th Edition. She attended the screening for the short film Spark and Light, which starred Riley Keough. Markle looked super stylish in this outfit by Miu Miu. She was probably styled by her bestie, Jessica Mulroney.

Meghan was just a struggling actress when this photo was taken in 2006. She was at the ALMA Awards Gifting & Lifestyle, posing for some photos and looking at some merchandise. Her style looked so effortless!

Markle was at the Toronto International Film Festival in 2012 where she attended the Producers Ball for Rising Stars with some of her costars from Suits. She donned this bright pink sateen dress with black shoes and a black clutch.

A month before her divorce, the actress attended the “Tales of Endearment” celebration, which was hosted by Diane von Furstenberg. The dress she wore was super cute, but the white shoes weren’t the best choice.

Markle was one of the guests at TV Guide’s Annual Hot List Party in 2012, which was held at Skybar at The Mondrian Hotel in Los Angeles. She looked lovely in this bold bodycon dress, which hugged her body in all the right places.

In 2017, Markle was at the NBC TCA Winter 2014 Press Tour. Being part of a successful show meant that she had all kinds of invitations to events like these. She looked all kinds of gorgeous in this pencil skirt and blouse combo.

As a famous television actress, the brunette bombshell was invited to Elle’s 6th Annual Women in Television Dinner, which was held at Neuehouse on January 20, 2016 in West Hollywood. The red brocade dress with the matching red lip was a great choice. 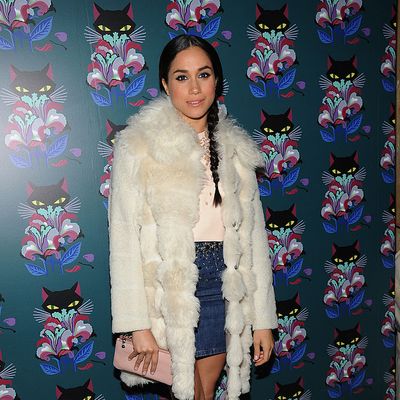