When it was announced that Rory Gibson had been recast as Noah Newman on The Young and the Restless (Y&R), viewers received the news with muted curiosity.

Gibson wasn’t only new to Genoa City, he was new to daytime television. And with just a few TV movies under his belt, the actor’s main draw was his mystique. Interestingly enough, he’s brought that same element to Noah Newman, whose return to the canvas has family and friends wondering what’s really happening behind his calm exterior.

Although Gibson has landed a role on the top-rated soap opera, the stakes are pretty low. Unlike the recasting of Spencer Cassadine (on General Hospital) or Dan Feuerriegel (on Days Of Our Lives), Gibson isn’t replacing any fan-favorites. Robert Adamson left the soap in September 2020 and Y&R viewers haven’t exactly been clamoring for more Noah Newman.

Want Y&R spoilers? Check out Young And The Restless Spoilers For The Week (December 6, 2021)

On top of his character’s distance from recent storylines (both emotionally and geographically), Gibson hasn’t returned as part of any narrative. From his debut at Vicky and Ashland’s wedding in Tuscany, Noah has shuffled between stealthy and stoic, giving advice to loved ones while deflecting questions about his own affairs.

Yet, despite his character’s limited range so far, Gibson has offered up an enticing first impression. He appears totally at ease on camera, and never over-acts. For that alone, we can praise Y&R’s casting team.

Better yet, his understated style has nuances which speak to the current mystery around Noah’s return to Genoa City. He’s chilled out but cagey, insightful but slightly withdrawn.

While friends and family have all remarked on his reticence to speak about his time in London, Noah hasn’t done anything to arouse suspicion. A lesser actor would fidget or employ physical quirks to demonstrate their discomfort; Gibson, on the other hand, gives us more by doing less.

In many ways, Gibson’s model for ingratiating himself into the canvas appears to be the same co-star who allegedly saved his audition: on-screen dad, Joshua Morrow (Nicholas Newman). Much like Morrow, Gibson plays it casual. Seeing the two of them share a scene together looks almost competitively relaxed. On the other hand, when he’s trading lines with a character who tends to overreact – like Phyllis (Michelle Stafford) – he provides contrast by grounding the scene.

Will Noah continue to evolve into his father’s son? It’s hard to say. Since Gibson’s arrival on the canvas, Nick has been in a bad place. At first, Noah’s dad was wallowing in self-pity about being on the outs with his sister and father; later, he needed to vent about the dissolution of his relationship with Phyllis. Noah has coached his dad through his emotions, which has sort of flipped the paternal roles in an awkward way.

In that regard, the new Noah may be a little too opaque, leaving viewers to search high and low for something that will reveal his true nature. When he’s instructing his father to be patient and keep his emotions in check, is he being arrogant or sincere? Are all of the rings on his fingers a sign of pretentiousness, or are they meant to signal his artistic life? We just don’t know yet.

Want more spoilers? Check out Young And The Restless: Spoilers For December 2021

In an interview with Soap Opera Digest, Gibson revealed a note that Y&R offered him during the audition process which sheds light on the future of his character.

“They weren’t crazy about [the audition tape], because I played him more on the tense and greedy side,” Gibson said at the time. “They said, ‘Noah is a good dude, but we’re still bringing you in for the callback.’”

Noah Newman certainly acted out and had his troubles prior to Gibson’s recasting, so viewers are eager to learn whether there is more to his devastating break-up in London than he’s willing to admit. (And of course, there is!)

Will his ex, a fellow artist who became bitter about Noah’s success, come storming into Genoa City? Will Noah get caught up with his other ex, Tessa (Cait Fairbanks), and create problems for Mariah (Camryn Grimes)?

We won’t fully know what to think about Gibson’s performance until his character is tested, so let’s hope a Noah Newman storyline takes center stage in early 2022! 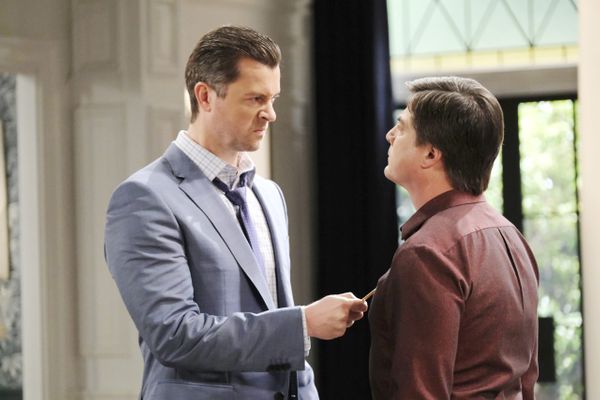