RHOC: All 12 Couples Ranked From Worst To Best

The Real Housewives of Orange County is Bravo’s longest standing show within the entire franchise. The show was the first installment within the Real Housewives series and has now been around for a whopping 12 seasons! Many of the women appear on the show alongside their husbands, so viewers feel like they get to know the starring ladies and their relationships — and there have been a lot over the past decade! We’ve selected the 12 most popular couples to appear on the show and ranked them from worst to best! Check it out:

Kelly Dodd joined the RHOC in season 11 and didn’t exactly make the greatest impression on either her co-stars or many fans. One of her main storylines centered around her husband, Michael Dodd. The two have been together for over a decade as they started dating in 2004 and had a child together in 2006. According to Kelly, there were several problems in their marriage, so she filed for legal separation and even pursued a divorce. Kelly was in a relationship with another man, but when that didn’t work out so she ended up mending her relationship with Michael and the two put the divorce on the back burner. While on the show their relationship came across extremely rocky, with a lot of fighting, bickering and a clear lack of communication. We hope to see these two back on track next season!

Even though Lynne and Frank Curtin came off as two totally dysfunctional people, fans really rooted for them. Sadly, their 20-year marriage fell apart shortly after Lynne was fired from The Real Housewives of Orange County, mainly due to the stress of their financial situation. Viewers watched them on the show during season 4 and 5 as they struggled to keep their two daughters in check and later grapple with the idea of not only being evicted from their home, but also find out Frank had been hiding their financial distress from his family until it was too late.

Most viewers would be surprised to learn these two are still together! Their relationship caught a lot of flack while Gretchen Rossi appeared on RHOC from season 4 to season 8 because many people felt Slade was a serial Housewife dater (he previously dated Jo De La Rosa and Lauri Peterson) and that he was using Gretchen for her money as he’s been unemployed for years, but that didn’t stop them from getting engaged and even discussing having children! While they’ve made no progress in either of those departments, they are most definitely still an item and might even make a guest appearance in the upcoming 12th season!

Alexis Bellino joined the cast of The Real Housewives of Orange County in season 5 and while she was loved by many, a lot of people saw her as an oxymoron. She preached Christianity while flaunting her wealth and sexuality, and openly stated that her husband Jim was above her and that her role was to take care of him. She didn’t seem to mind that he didn’t help with the children, or that he talked down to her in conversations caught on camera. Alexis wasn’t allowed to go on girls’ trips without her husband or have a job outside of raising their children! Even though their relationship might seem strange to many, they’ve now been together for a decade and are still going strong today!

Shannon and David Beador have gone through a lot since she joined the RHOC in season 9. During the first two seasons viewers watched as the two grappled with the threat of divorce and David’s infidelity. It definitely seemed like these two weren’t going to make it, especially after details of what happened were shared, like the fact that Shannon knew David’s mistress! He had even introduced her to his family, told her he loved her and threatened to leave Shannon. Thankfully, these two managed to work through it and seem to have gotten to a much better place. It’s quite remarkable how far they’ve come and, while they still aren’t perfect, they sure have proved they’re willing to put in the work for their relationship!

Not much is known about long-time Housewife Vicki Gunvalson and her relationship with Steve Lodge. She seemed to move on fairly quickly from her previous relationship with Brooks Ayers which was highly controversial, so anything is a step up from that! He made brief appearances on camera in season 11, so we’re hoping we’ll get to see more of their relationship in season 12, but it’s clear from her social media they are still going strong and she’s absolutely smitten! Lodge is a former police officer who now works as a consultant at a public affairs firm in California. What’s most important is that her daughter Brianna and her son Michael seem to get along really well with her new beau.

Meghan King Edmonds is Jim Edmonds’ third wife. They got married in 2014, just before she joined the cast of RHOC in season 10. When they first began appearing on the show, fans weren’t sure what to make of their relationship. While it’s hard to judge a book from it’s cover, it’s clear Jim is away a lot due to his job, but they seem to make the most of it and Meghan’s done a good job of crafting out her own role as a step mom. Last season viewers watched Jim and Meghan as they went through their journey to become pregnant via IVF and in November 2016 they welcomed their first child together, Aspen King Edmonds.

Former Miss Kentucky joined The Real Housewives of Orange County in season 9 and even though she only stuck around for one season, she’s made several guest appearances on the show and is still in the social circle of current Housewives, Vicki Gunvalson and Kelly Dodd. She appeared on the show alongside her husband Christian Rovsek

We never thought we’d see the day, but Lydia McLaughlin has agreed to reprise her role as an O.C. Housewife and will be returning as a full time cast member in season 12! She and her husband Doug appeared on the show in season 7 and while we didn’t get to know them very well as a couple, they seemed to have a relationship. They’ve been married for almost 11 years! As a Housewife she became well known for her devout Christian faith and her cute little family — which has grown since she last appeared on the show! She and Doug welcomed another child, a son named Roman, in November 2014.

The love story between former Housewife Lauri Peterson and her now husband George was like a real life love story. They met while Lauri was still an O.C. Housewife, and have now been together for over a decade! When she first started filming RHOC she was a struggling single mom, but after a few seasons of filming she met met George. They enjoyed a whirlwind romance and got married at the end of season 3. They recently adopted Lauri’s son Josh’s daughter, Kennedy, and are enjoying raising her as their newest family member!

Heather and Terry Dubrow are definitely a fan favorite couple on The Real Housewives of Orange County. While they’ve shared some of their ups and downs, like Heather’s frustration with Terry’s busy work schedule, it’s clear these two have a really great relationship. Not only have they been married for nearly 20 years and raised four children together, but they’ve also managed to mesh their personal and professional relationship as they’ve collaborated on several projects together like their book “Dr. and Mrs. Guinea Pig,” their skin care line and, of course, both RHOC and Botched.

When Tamra first started out on the RHOC in season 3, she was known as Tamra Barney, as she was married to Simon Barney. Their marriage fell apart a few seasons later and she quickly fell in love again with a man named Eddie Judge. They tied the knot in a televised ceremony in June 2013. Viewers have watched Tamra and Eddie get closer and closer each season and, as much as these two might seem like opposites at times, it’s actually what makes them such a perfect match as they balance one another out. Eddie exudes all the qualities Tamra needed in her previous marriage — acceptance, patience, unconditional love and he’s even inspired a new interest in her — fitness! Tamra is now a fitness competitor and she co-owns CUT Fitness with Eddie. These two are hands down one of the best couples on RHOC! 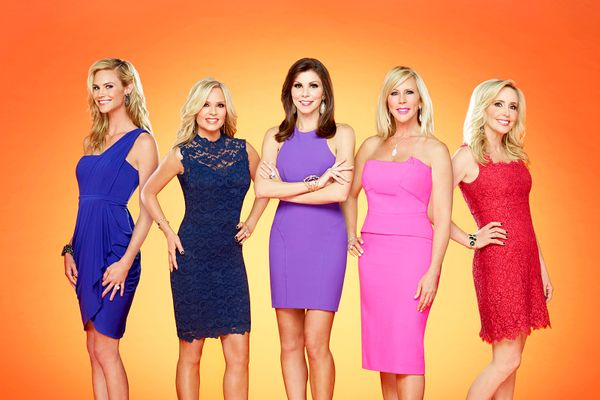