Sons of Anarchy was a surprise hit when it debuted on FX on September 3, 2008. The unique premise quickly grabbed a hold of a large and loyal audience and the show went on to have a very successful seven season run in which fans were very invested. After coming to an end in 2014, many of the show’s cast and crew have spilled secrets about working on the dark and gruesome series that captivated and at times horrified audiences. With a prequel series allegedly to come, and a spin-off series in the works, take a look back at the original Sons of Anarchy and 10 behind the scenes secrets from the series.

Filming in Sun Valley and North Hollywood for long days meant the heat was one of the biggest factors for the cast and crew to maneuver as they were usually decked out in full jeans and SAMCRO leathers. Kim Coates (Tig) revealed that it became common on set to have someone pass out or be taken to the hospital. “We used to call it doing ‘the timber.’ We’d lose a crew member a week from passing out. Boom. Gone.” Once even Tommy Flanagan (Chibs) had to be taken to hospital to get an IV, and there were designated umbrella holders who had to try to shield the stars in between takes. They all had ways to fight dehydration including Charlie Hunnam who drank “untreated, unheated ocean water from some f–king kelp forest somewhere,” which was recommended by his hot yoga instructor.

Over the many seasons of Sons of Anarchy, fans got used to seeing quite a bit of star Charlie Hunnam with, and without, his clothes on. As it turns out though, for all seven seasons it was not Hunnam’s back fans were looking at with the end shot of the opening credits. Tyson Sullivan got booked as a body double for Hunnam for the iconic ending shot, not to mention it is also Sullivan’s hand that are seen opening the knife and revving the bike in the credits. Since it was Hunnam for many of the show’s sex scenes, it was surprising for many that they opted for a body double for the opening sequence.

With Sons set in the fictional town of Charming which is supposed to be situated in Northern California’s Central Valley, the majority of the series was actually shot at Occidental Studios Stage 5A in North Hollywood. The main sets there were the clubhouse, St. Thomas hospital and Jax’s home. Meanwhile they got extra use out of the production rooms by using the writing room as the scenes for the Charming police station.

It isn’t news to fans now that star Katey Sagal (Gemma) is married in real life to SOA creator Kurt Sutter, but that isn’t where the family ties end. Katey Sagal’s younger sister, Liz, acted as a producer on the series while her brother Joe appeared in one episode, and Margaret Murphy is played by McNally Sagal, Katey Sagal’s sister-in-law. Meanwhile, Donal Logue, who portrayed Lee Toric, and Katerina Logue, who portrayed Toric’s sister, Pamela are also brother and sister in real life.

Since they were spending all day at work together, it wasn’t exactly easy for Katey Sagal and Kurt Sutter to separate their professional and personal lives, and Sagal admitted in an interview that it did get very difficult. “In the second season and what transpired in the first episode, it actually was — I call it — it was a rough six weeks. The commitment you want to make with material like this, as an actor, you have to shake the stuff off, but this was a particular experience where it was difficult. And it wasn’t so much, you know, coming home to have a normal evening […] So I guess my answer to you is it was difficult. It was sometimes difficult. But it’s not always difficult. You know, but uncomfortable isn’t necessarily a bad thing.”

Over the many seasons of Sons of Anarchy, star Charlie Hunnam got a lot of criticism for constantly wearing pure white sneakers. As it turns out that was a decision made consciously by Hunnam, who drives a motorcycle in real life. In preparation for the role, he hung out with bikers in Northern California, and essentially met the person who he portrayed as Jax. “There was this kid I met in this club who was exactly who I was hired to play. He was the son of a man in the motorcycle club, he’d grown up in the club, every one of his birthday parties had been thrown in the clubhouse. I wear exactly the shoes he wore, the jeans he wore. He had a very powerful impact on me. He was an amazing guy.” Unfortunately, the young man was shot and killed before SOA started production, but Hunnam continues to wear a bullet necklace in honor of him. “I wear it for him – to remember the flavor he taught me.”

Throughout all seven seasons, a homeless women appeared at random times, and no explanation was ever given to her. It quickly became suggested that she was to represent a Jesus Christ figure, and despite numerous blatant allusions to that in the final episode, Kurt Sutter left her meaning open and never gave a distinct explanation of her character which frustrated fans.

With much of Sons of Anarchy‘s focus being on the dysfunctional “family” that is SAMCRO, it isn’t too surprising that some of that drama and emotion spilled off-set as well. On more than one occasion there were reports of creator Kurt Sutter getting into intense arguments with some cast members. Sutter and Hunnam got into an argument after Hunnam gave an interview where he said that he didn’t agree with the writers keeping the cast in the dark about what was going to happen, which caused Sutter to take to his Twitter to respond. Sutter was then involved in a serious argument with Tommy Flanagan (Chibs) and despite reports that the fight got so bad police had to be called, that wasn’t the case, and the two men were able to reconcile.

At the time, most fans may not have realized that throughout the series, each character had a weapon that was tailored to their personality. Happy carried a Glock 17 9mm; Jax had a Springfield Bureau Model .45 caliber; Chibs had a Beretta 92F 9mm; and Tig had a SR9 9mm. The props department used all replicas and had tons on hand for the different actions the guns were used for. “If you’re gonna throw it at somebody, we might use [the hard replicas] because that way you don’t damage the gun. If they’re gonna hit somebody across the head with a gun, we have rubber guns. And there’s various stages of rubber. If someone’s really gonna crack somebody across the head we usually make a really soft rubber,” first assistant prop master Brandon Boyle explained to EW.

Tragedy rocked the set of Sons of Anarchy when one of the show’s former stars, Johnny Lewis, was found dead on the morning of September 27, 2012. Lewis starred on the show as Kip “Half Sack” Epps for 26 episodes from 2008 to 2009, and after his character was killed-off on the show, Sutter revealed it was because of “creative differences.” After the news of his death in 2012 in which he fell from a villa rooftop after he killed his 81-year-old landlady, his former SOA castmates were very tight lipped until Sutter released a statement where he revealed that many knew of Lewis’s struggles with drugs and suffered from what many suspected was an untreated psychological disorder after suffering head injuries in a high-speed motorcycle accident. “It was a tragic end for an extremely talented guy, who unfortunately had lost his way. I wish I could say that I was shocked by the events last night, but I was not. I am deeply sorry that an innocent life had to be thrown into his destructive path. Yes, it’s day or mourning, but it’s also a day of awareness and gratitude. Sadly, some of us carry the message by dying.” Before his death, Lewis had been in and out of jail and rehab programs, and in 2010 fathered a child with his then-girlfriend Diane Marshall-Green who had appeared in the Sons of Anarchy episode “AK-51” in 2008. 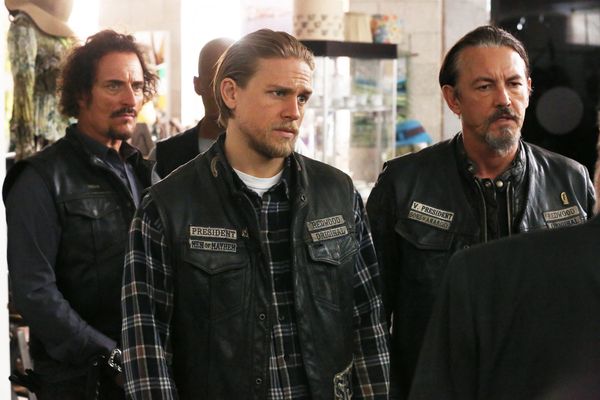