The American legal drama series, Suits is now into the fifth season and just been renewed for a sixth. The show quickly rose to the top as one of the most popular shows on the USA network. Suits is definitely one of those shows that is built on a great cast, without them the show just wouldn’t have the same level of success. One of the most popular characters to tune into is Louis Litt, played by Rick Hoffman. Similar to Ari on Entourage, Louis Litt is one of those larger than life characters that is constantly stealing the show! Rick Hoffman is so good at portraying the hot-headed, needy, egotistical lawyer who constantly feels under appreciated next to his long-time nemesis, Harvey Specter, he has become a character fans love to hate and hate to love. There’s been a lot of great episodes in the past 4 years featuring Louis’ hilarious behavior and witty one liners, but we’ve narrowed down this list to his 6 best moments on the show:

6. He’s Well Versed in the Rules of Football

Louis is expecting a new client who he wants to impress so he went to great lengths to study up on the rules of ‘football.’ Fans of the show know that he’s not exactly the most athletic and would prefer to attend the opera or the ballet over any kind of sporting event, but nonetheless Louis rushes into Harvey’s office with excitement to show off his new found knowledge. What he doesn’t realize is that his new client is from Europe where  the term football refers to soccer, not American football…Of course Harvey and Mike know this, but don’t tell him because it’s much more fun to watch him make a fool of himself!

Loyal fans of the show know that Louis Litt cannot live without his dictaphone — whether he is pacing in his office sorting out his random thoughts or sitting at his desk mumbling about his latest debacle, Louis always has his recorder handy and it’s full of his incessant ramblings. He’s also been known to record people like Harvey telling him he’s “the man” and replay it back over and over again. But most of all, he likes to use it to list off reminders for himself, or for his former secretary, Norma. For example, to go out and buy socks because he’s running low or to log a particular feeling that day. There’s many, many funny quotes to take from these scenes, but our favorite is when Louis lists off his bucket list. His bucket lists contains things like climbing a volcano, yodel at the top of a mountain and meet Kenneth Branagh and challenge him to a soliloquy contest…and win.

Louis is a ferocious lawyer who can negotiate his way out of anything, whether it’s making an opposing lawyer settle a case, forcing the best deal on his HBO subscription or getting his favorite meal back on the menu at a restaurant. Louis loves to bully his way through life and we must admit, he’s definitely all bark and no bite which makes it all the more hilarious!

Being a corporate lawyer and senior partner at a huge law firm like Pearson Specter Litt can be stressful, especially for someone as neurotic as Louis. So in order to wind down after a busy day, Louis likes to go ‘mudding.’ One of the best scenes was when Louis took Mike mudding with him and when Mike was tepid about getting in, Louis said, “There’s nothing to be afraid of. It’s just good, clean mud.”

Louis can be a little cold and mean spirited, especially when it comes to teaching the associates at the firm as he does his best to instill fear in them. But he does have a few soft spots like the ballet, Shakespeare and his unwavering love for cats. Remember his arch enemy Nigel? When Louis met Nigel’s cat, Mikado all his guard against Nigel came crashing down and he turned into a big softie as he said, “Who is this magnificent creature?” He even offered to babysit him while Nigel was away and held a mock trial to try and gain custody of the animal!

1. The Catch Phrase Litt Up!

Louis Litt is nothing without his famous catch phrase, “You just got Litt up!” Like everything with Louis, he takes it a little too far by printing it on coffee mugs, shouting it from the rooftop or yelling it into his dictaphone. Who doesn’t want to get Litt up? 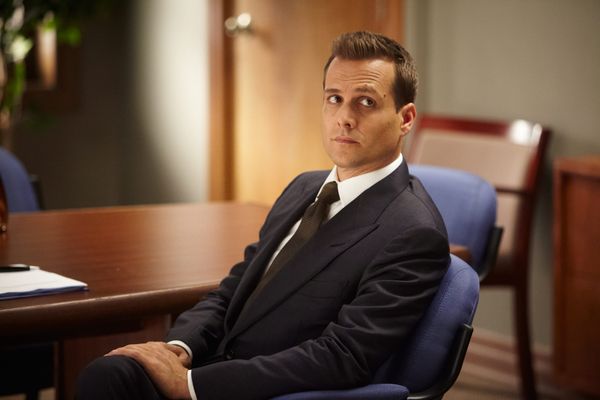