The 12 Most Iconic TV Couples Of Our Time

The illicit relationship between Carrie Mathison (Claire Danes) and Nicolas Brody (Damian Lewis) definitely keeps viewers hooked on the TV drama Homeland. These two couldn’t be more different – Carrie is a CIA analyst and Brody is an American POW who has been turned by Al-Qaeda – but the chemistry between the characters was undeniable.

11. David Schwimmer and Jennifer Aniston – Ross and Rachel from “Friends”

The relationship between Ross and Rachel on the hit show  Friends definitely stood out. Maybe it was because Ross had been in love with Rachel since high school or maybe it was the chemistry between David Schwimmer and Jennifer Aniston but, whatever the case, this relationship has definitely become iconic.

The repartee between Lorelai (Lauren Graham) and Luke (Scott Patterson) was amazing and it seemed to prove that these two were believable as a couple. It certainly helped that it took a while for them to finally start dating. With all of that tension between these two on-screen, they are definitely one of the most iconic couples.

Elena, Stefan and Damon were enveloped in a complicated love triangle, but we were always rooting for Elena – played by Nina Dobrev – and Damon – played by Nina’s former off-screen love, Ian Somerhalder. Their chemistry was off the charts!

The relationship between Sydney Bristow and Michael Vaughn on Alias is complicated – she is a spy for the CIA and he is her CIA handler – however, these two belong together. They spend enough of the show trying to suppress their feelings for each other which makes viewers want it even more!

Kelly and Dylan are one of the most – if not the most – iconic couples of the ‘90s. Although these two enjoyed an on again off again relationship throughout the majority of the series, they were clearly meant to be. Kelly pretty much sacrificed her friendship with Brenda to have him, so it only makes sense that these two ended up together.

The relationship between Uncle Jesse and Aunt Becky was a big part of Full House. Although Jesse – played by John Stamos – had other girlfriends, his chemistry with Becky – played by Lori Loughlin – resonated with viewers and led to her being a permanent part of the show.

The romance between Pacey (played by Joshua Jackson) and Joey (played by Katie Holmes) is what made Dawson’s Creek worth watching. Although these two started out disliking each other, it only took a few seasons for sparks to fly. Their chemistry was so undeniable, it only made sense that Joey should end up with Pacey, instead of Dawson.

Buffy and Angel were definitely an odd couple – she was a vampire slayer and he was a vampire; however, in spite of their obvious differences, it’s impossible to deny their chemistry. From the first season, it seemed inevitable that these two would make a go at it and things would get complicated as a result.

3. Sarah Jessica Parker and Chris Noth – Carrie and Mr. Big from “Sex and the City”

Carrie and Mr. Big – in spite of all of their problems – belonged together. Even though they went on and off like a light switch and spent the majority of the series romantically involved with other people, Mr. Big was always the one for Carrie, even when he was playing hard to get.

2. Adam Brody and Rachel Bilson – Seth and Summer from “The O.C.”

No couple on The O.C. had more chemistry than Seth and Summer. Even though these two ran with different crowds – Seth was a bona fide nerd and Summer was one of the most popular girls in school — their interactions dominated the series, making the romance between Marissa and Ryan look stilted.

Blair Waldorf and Chuck Bass had everyone rooting for them from season one of Gossip Girl. It didn’t really matter who either of them dated – if they weren’t plotting away together, something wasn’t right on the Upper East Side. Thankfully these two ended up married in the season finale, otherwise millions of viewers would have been left disappointed. 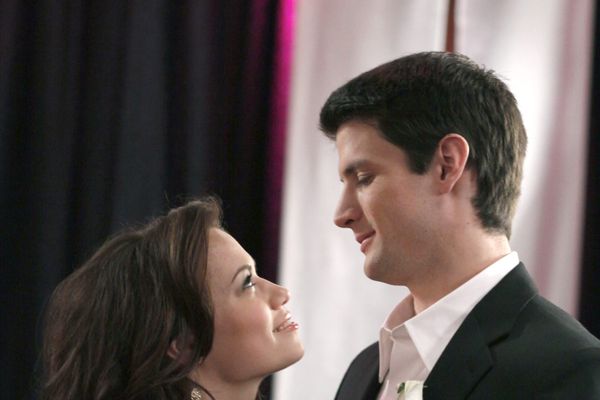