The O.C. premiered on August 5, 2003 – can you believe it was 12 years ago? We’ve never tired of the Fox drama’s Southern California setting, quirky humor or teenage romances — but even we have to admit that some of the show’s couples didn’t have the greatest chemistry. A frustrating thing about the show was that conflict generally came from when the core couples (Summer and Seth, and Marissa and Ryan) were broken up by other romantic interests. Soon, the characters would realize that they weren’t in love with these new people and find their way back to home base (over and over again). We liked the pairings of Summer and Seth, Ryan and Marissa, Seth and Anna, Summer and Zach and Ryan and Theresa. We even buy Marissa’s quick lesbian fling, because Olivia Wilde was so great as Alex – but many of the short-lived couplings on the show were examples of terrible chemistry. Here are our picks for the 8 worst chemistry couples on The O.C. – see if you agree:

We actually loved Lindsay — she played the oboe, wore big, fuzzy “Freudian slippers” and ate Zone meals (remember the Zone diet?) at lunch, calling out Marissa (Mischa Barton) and Summer (Rachel Bilson) for eating cheese fries and somehow staying model-thin. Lindsay was probably the closest thing to a normal girl on the show…but she was a rather odd romantic match for Ryan (Ben McKenzie). He was an outsider, too, so perhaps that’s what the writers and producers were going for when they paired up these two — and Ryan was also pretty smart, so he understood her slippers — but he and Lindsay never had much chemistry. To make things crazier, Lindsay turned out to be the biological daughter of Caleb Nichol (Seth’s grandfather). We weren’t shocked when she and her mother moved to Chicago and never looked back.

Oliver was a hot mess from the moment Marissa met him in the waiting area of a therapist’s office (that probably should have been her first clue to stay away). We get why Marissa was drawn to him: at a dark point in her life, he seemed to be the only person who understood what she was going through. But they were always a strange couple, especially given that Marissa’s true love was Ryan. One might argue, though, that they weren’t supposed to seem like a solid couple — Oliver quickly became unhinged, and was so obsessed with Marissa and even held her at gunpoint at a party. You know, just usual teenage stuff.

During Marissa’s ongoing downward spiral, she also had a casual relationship with Kevin Volchok (aka “Volchok”), played by Cam Gigandet.  Fun fact: he was actually named after a real-life Kevin Volchok who is Adam Brody’s talent agent. We get why Marissa was physically attracted to him, and she always liked bad boys — but still, this guy was always a little hard to believe. He lived in some shady warehouse yet was the kind of guy who once watched The Sound of Music with Marissa to get to know her better (he fell asleep during it, though). Marissa eventually realized that he wasn’t much of a catch when he cheated on her at prom and stole a few thousand dollars from the fund that was meant to go to the post-prom party. Ryan, of course, nearly beats him to death, because chivalry and whatnot.

Maybe we just don’t like the idea of Sandy and Kirsten Cohen ever breaking up, but it was hard for us to buy the romance between The O.C.‘s lovable patriarch and his co-worker Rachel Hoffman.  Kirsten is a pretty blonde, so Rachel is certainly Sandy’s “type” — but Rachel just seemed a little too young and pretty to be interested in someone like Sandy (as cool and nice as he is). To be fair, Sandy and Rachel never really had an affair – they simply worked late and had a drink together, causing Kirsten to get jealous. Rachel ended up rejecting Sandy’s advances, which seems believable. But there was a lot of romantic tension between them and we got the sense that Rachel really wanted Sandy to be single so she could indulge in the romance.

Oh, Marissa. She really had a thing with all kinds of guys, didn’t she? D.J. was the “yard guy” at Caleb Nichol’s mansion, making him a kind of wrong-side-of-the-tracks love interest outside of Marissa’s social level (she was attracted to this in Ryan, too). Marissa wanted to feel like she was trying something kind of dangerous with D.J., but she also didn’t want anyone to know; when Ryan came back and asked if she was single, she lied and said yes. Of course, this didn’t sit too well with D.J., who confronted her about it. To her credit, Marissa apologized and told her disapproving mother that they were seeing each other. But did we ever believe that Marissa and “the yard guy” were really a couple? You could argue that Marissa would date literally anyone, but this one seemed like kind of a stretch.

We absolutely loved Taylor (played by Autumn Reeser), who was a new character brought into the friend group of Seth-Summer-Ryan-Marissa. She actually fit in with the other characters and seemed believable. She was goofy and weird, a villain who turned out to be cool, and we were even on board with the somewhat unbelievable storyline in which she went to Europe and got a French lover who ended up writing a tell-all book about their romance. “I feel like there’s a lot of girls out there who could really relate to her, who hadn’t seen themselves on TV in that way,” Autumn once said in an interview. “I loved that about her. I loved that she made no apologies for who she was even though she wasn’t what all the magazines said was OK. She was like, “I’m still valid. And I’m awesome. And I know I’m odd, and that’s OK.” But did it ever make sense that Ryan and Taylor were a couple? They never really had any romantic chemistry together, and their relationship was obviously doomed.

Now, you might think of Johnny Harper, Kevin Volchok’s surfer friend, as a love interest for Marissa, since he was pretty much always in love with her. Most memorable, because she didn’t love him back, he desperately climbed up a cliff and ended up falling to his death. But where he fits into the “worst chemistry couples” list is that he once had a short relationship with Marissa’s little sister, Kaitlin. In the first season of The O.C. she was like nine years old, but somehow by season four she was a teenager played by Willa Holland. We get the idea that a little sister might be a substitute for the person you really want to be with, but Johnny and Katilin? Come on now.

After Johnny died, his cousin Sadie Campbell came to Orange County to help Johnny’s mother, Gwen — and while she was there, she couldn’t resist the boyish good looks of ol’ Ryan Atwood (we don’t blame her). Ryan and Sadie had a relationship, but when he found out that she used to date Volchok, he only hated him more. The Ryan-Sadie romance didn’t last very long, since Ryan got accepted to Berkeley and Sadie didn’t want him to stay down in the O.C. just for her. When they broke up, she went back to her business of making jewelry (as one does). But was Sadie ever really Ryan’s type, and did they have any chemistry? They were another obviously doomed pairing on the show. 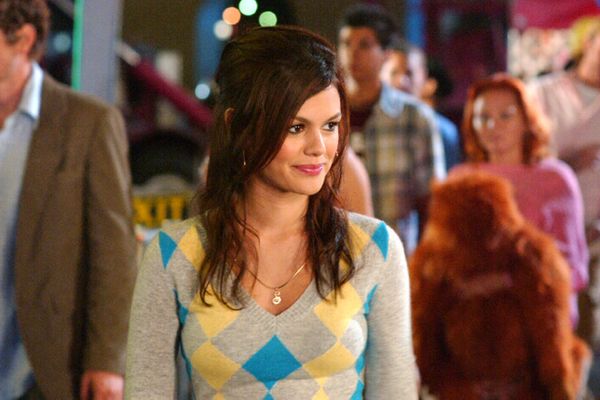