The Vampire Diaries has finally come to an end after eight successful seasons and we already miss it! The popular supernatural drama series premiered back in 2009 on The CW and has been a huge hit among viewers up until it’s series finale on March 10, 2017. It was once the most-watched series on the network, collected numerous awards and nominations, and even spawned it’s own spin-off series! The series finale has caused us to look back, so here’s a look at 9 Vampire Diaries couples you probably forgot ever happened!

Back in season one, when Jeremy was still viewed as Elena’s little brother, he started dating a vampire named Anna. This relationship came shortly after his fleeting romance with Vicki Donovan. In typical Jeremy fashion, he fell hard and fast for this conniving vampire who was only using him to steal his ancestor’s journal in order to bring back her mother, Pearl. Unfortunately, she died when Uncle John Gilbert came back into town and staked her.

Remember when TVD‘s favorite witch, Bonnie Bennett dated the pretty boy bartender named Ben? Probably not because their relationship was so fleeting. Back then. Bonnie was just a high school student looking for a fling, but Ben had other intentions as he turned out to be a vampire working under the command of Anna Zhu. Guess it’s for the best this one didn’t work out!

Caroline and Matt dated at the end of season one and throughout a good chunk of season two. At first she was just using him to make Damon jealous, but their relationship blossomed into more. They actually seemed like a really good match, but then Caroline was turned into a vampire which ended their relationship for good. Nothing bad happened between them, Matt simply started to notice Caroline acting differently and eventually the two drifted apart. They sure made a cute couple though!

The relationship between Damon Salvatore and Rose was quick, but in that short period of time these two shared a pretty strong connection. It wasn’t a head-over-heels love, but more a companionship as they both offered each other a shoulder to lean on during hard times. These two were more like best friends who also shared a physical connection. During their romance, Rose knew Damon was in love with Elena and she accepted it. Damon used her as a comfort in lieu of Elena. When she died unexpectedly it really shook Damon which proved how much he cared about her. These two were never meant to be in the long run, but were a great duo nonetheless.

This romance was extremely fleeting which is why many people would probably forget it ever happened. Remember back in season one when Tyler Lockwood was a total jerk who no one liked? He started hooking up with Vicki right after she broke up with Jeremy Gilbert. Their relationship was certainly not deep and it was clear the two of them were just using each other. When Tyler tried to force himself on Vicki at a party, he and Jeremy got into a fight. Vicki then wandered off into the woods and was turned into a vampire by Damon.

The relationship between Alaric and Jenna shouldn’t be that forgettable considering it’s how he’s introduced to the show and forms his close relationship with both Elena and Jeremy, but we’re including it on this list because it dates all the way back to the first and second season. Sadly these two never reach their full potential because Sommers is killed in a sacrificial ritual for Klaus after being turned into a vampire. This loss was heartbreaking because Jenna was such a fun-loving character.

Damon and Caroline were never a couple per se, but they definitely engaged in a relationship. Caroline and Damon are two characters who evolved a lot from season one to eight which is why this relationship might be hard to believe now, but back in season one before Caroline was a vampire, Damon took advantage of her while she was feeling rejected from Stefan. They met at the Mystic Grill and hooked up. When he bit her, she freaked out but he compelled her to forget. He then went on to use her as an “object” to have fun with as he used her as a blood source and continuously compelled her to do things for him.

We never actually got to see Matt Donovan and Elena Gilbert together because when the series first started the two had just broken up, so it’s no wonder many people might have forgotten these two were once an item. For the rest of the series we see their relationship evolve from jealous exes (mostly on the behalf of Matt) to long-time friends. Elena is quickly swept off her feet by Stefan while Matt is still reeling from his feelings for Elena, but he too eventually moves on with Caroline.

Like many other couples on this list, Jeremy and Vicki date back to season one. Back then Jeremy didn’t have any supernatural powers and he was going through that whole teen angst stage. Their chemistry was pretty good, but the whole relationship was based on their shared desire to do drugs and hook up. She broke things off with Jeremy when he started to develop genuine feelings for her and was turned into a vampire by Damon no long after. 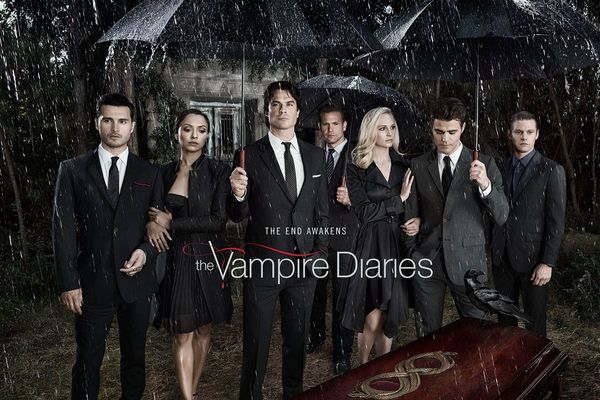