The end of the CW series Veronica Mars was a tough one for anyone who was a fan during its original run, from 2004-2007. It was one of those shows that was underappreciated by the masses, but intensely appreciated by its fans. So it was always up against the ropes, in terms of its fate with the network, especially during the third and final season, which was shortened (by two episodes) and interrupted (there was an eight-week hiatus). The series’ cancellation wasn’t officially confirmed until a few weeks after the season three finale aired, and all the uncertainty led to a lot of loose ends – like these:

Weevil (aka Eli Navarro) was Veronica’s connection to the other side of the tracks. You’ve heard of the fictional stereotype “hooker with a heart of gold?” Well, Weevil was the opposite gender equivalent. He was the leader of a motorcycle gang, often in trouble with the law, but he did have a good heart and was often ready to help Veronica – although sometimes for a price. He was a key character throughout the series – in fact he was the title character in the series’ penultimate episode, “Weevils Wobble But They Don’t Go Down.” In that one, he’s been falsely arrested for selling fake debit cards. Veronica proves his innocence but, the last we see him, he gets his hands, thanks to Veronica’s tip, on a machine that makes fake debit cards. Then what? Does he get into more trouble? Who knows! We never hear anything more about it.

When the series opened, Keith, Veronica’s ever-loving dad, had just been ousted as Sheriff of Neptune. He had accused Veronica’s best friend’s father of murdering his own daughter, then another man came forward as the killer. He was an outcast in the tight-knit, hoity-toity town and became a private investigator – which ultimately inspired Veronica to do the same. However, in season three, episode 14, much time has passed and when the current Sheriff is killed, Keith is named acting Sheriff. He then decides to run to be officially elected to the office. In the last moments of the series, things aren’t looking good for Keith’s chances – he’s been charged for destroying evidence to protect Veronica, who is seen casting her vote before the final credits roll. Sure, it didn’t look good – but what happened? MOVIE UPDATE: It’s revealed in the 2014 feature film that Keith returned to his PI biz, with Dan Lamb (son of a former Sheriff) in the Sheriff’s office.

Perhaps even more significant than the question of whether or not Keith becomes Sheriff again is whether or not he goes to jail. That could kind of be a pretty big obstacle in the way of becoming Sheriff, don’t you think? We’ll talk later in more detail about the final episode with The Castle and the hard drive Veronica stole. But the bottom line is Veronica stole a hard drive from a billionaire and it was caught on video. Keith, being the ever-loyal dad he is, goes against his duty to uphold justice as acting Sheriff and erases the surveillance footage, just to protect his daughter. He doesn’t get away with it – as we mentioned in the previous blurb, he’s charged for the crime. But what comes of that? Is he tried? Does he go to jail? Are the charges dropped? We’ll never know, although, as we already mentioned, in the movie he’s a free man back in his PI office.

5. What was the deal with the sex tape?

Over the final two episodes, we follow a captivating mystery involving a sex tape featuring Veronica and Piz. It makes for some classic Veronica sleuthing and wise-cracking, plus a bloody showdown between Piz and Logan (poor Piz doesn’t stand a chance). Ultimately, Veronica discovers the shady college club, The Castle, was behind it. But why? Why did they leak it? It turns out, the cameras were really there to spy on Wallace, who was Piz’s roommate. It just happened to catch the romantic rendezvous. But what did The Castle have to gain by leaking the video online? Was it just to humiliate Veronica? After all, Neptune’s young elite seemed to rejoice in humiliating and mocking her. Was it just the titillation factor? We’ll never know – that was one mystery Veronica couldn’t explain.

4. Jake Kane and The Castle: What gives?

For the uninitiated, a quick recap: The series begins with the revelation that Veronica’s best friend, Lilly Kane, has been murdered. Her billionaire father, Jake, was originally a suspect, but exonerated. Still, he was arrested for obstruction of justice. We also learn that Jake and Veronica’s absent mother dated in high school, and may still be seeing each other. Most significantly, it’s suggested that Jake could be Veronica’s dad – not Keith. But, after the first season, we don’t see him again throughout the series… until the very last episode. So it seems especially foreboding when it comes to light that Jake is the leader of the super-secret, shady society, The Castle. In fact, the whole Castle thing is only revealed in the last episode. It seems like a springboard for a much bigger storyline, one that could’ve carried over into a fourth season. But we’re left with these tantalizing tidbits that lead nowhere.

3. What about The Castle’s hard drive?

Among all the great The Castle stuff in the final episode, we have Veronica stealing Jake Kane’s hard drive. On it, she finds an incredibly damning list of everyone who’s ever been a member of the society, along with all the underhanded and illegal things they did in order to be granted membership. Eventually, Veronica gives the hard drive back to Jake, but lets him know that she knows. She knows everything. So… great. But what about it? What does this mean? What does she ever do with this information? Is it just a threat? Or, maybe, is there a deeper psychological issue at hand for Veronica? Maybe she doesn’t want to incriminate him because of that lingering thought that not only is this man her late best friend’s father, but he’s close with her mother and there had been the whole possibility that he was her father.

2. Will Logan and Veronica ever get back together?

They were the will-they-won’t-they relationship so many great series have had. Ross and Rachel. Sam and Diane. Sam and Rebecca. The fans even had a cute couple nickname for them: LoVe (get it? First two letters of their names?) Logan was the troubled, rich-boy rebel, always ready with his fists of fury. But he also had a soft heart – especially for Veronica (only after it melted following the first-season drama surrounding Lilly’s murder, when they started out far from friends). The chemistry between the two was undeniable and most fans insisted that they had to wind up together. But it didn’t seem meant to be during most of the final season. They went their separate ways, romantically speaking, most notably with Veronica dating Piz. Piz, of course, was the polar opposite of Logan: just a nice, sweet, music-loving guy. That’s where the series was left, unsatisfyingly. MOVIE UPDATE: She starts the movie with Piz, but ends it with Logan (long-distance-wise, as he’s in the navy)! Justice prevails!

1. Seriously, What Happens To Veronica?

When we last see our beautiful, wise-cracking, super-smart teen PI, she’s walking in the rain after having – presumably fruitlessly – voted for her dad in the election for Sheriff. With all she has going for her, her future should be so bright. Yet this gloomy image is the last shot of the series. Is this foreshadowing for an equally gloomy future? How depressing is that! Will she just continue on as a private investigator, alongside her dad? Would she move on to the FBI, as the short video released on the season three DVD set reveals? After all, she was up for an FBI internship. That seemed to be creator Rob Thomas’ hope for a fourth season. MOVIE UPDATE: Thankfully, the movie suggests a bit of a brighter future for Veronica than the series finale implies: it opens with her interviewing at a high-powered law firm, having graduated from law school, then it ends with a more down-to-earth bright future, taking over her dad’s PI business, which seems just right. 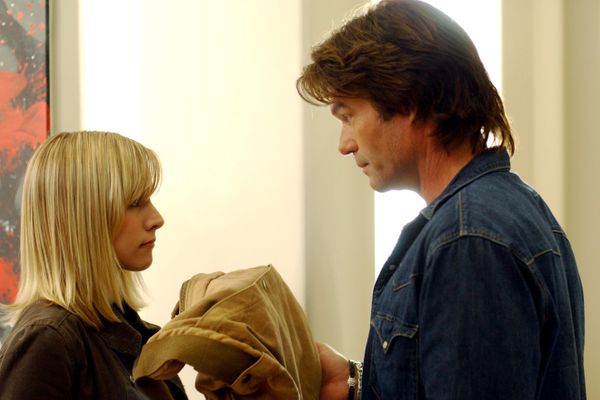