Sex and the City was one of the best shows on television back in the ’90s and early 2000s. Lasting for six seasons, the romantic comedy series starring Sarah Jessica Parker, Kim Cattrall, Kristin Davis, and Cynthia Nixon tackled all kinds of topics ranging from work, friendships, and most importantly, relationships. Viewers saw all of the women struggle in their pursuit of finding love in New York City, and while they all eventually landed their one great love, they kissed a lot of frogs along the way! Here is a definitive ranking of all 15 of Miranda Hobbes love interests on Sex and the City!

While it was funny to watch this guy lose it over nothing, he would not have been fun to date! Miranda ended up dumping the sweet and innocent Skipper Johnston to date fellow lawyer Kevin, who was more assertive, but she ended up getting more than she bargained for. He ended up being negative and totally toxic which was rubbing off on her.

Okay, this was just gross. In season 4’s “Defining Moments” Miranda dates a man named Doug who seems great on paper. He works as a cartoonist for the New Yorker and is good looking, but there’s one problem…he’s a little too comfortable around her. He’s the first man that Miranda has dated who goes to the bathroom with the door open — and we’re not just talking about number ones here! We don’t blame her for dumping (no pun intended) this guy after the stunt he pulled in her bathroom.

In season 4’s episode “Baby, Talk is Cheap,” Miranda started dating a man in her running group. She joined the group to train for a marathon which is how this love interest got deemed “marathon man.” Unfortunately, he was into some bedroom antics that Miranda was definitely not down for. While she gave it a shot after chatting it over with the ladies, when it came time for her to reciprocate, she couldn’t bring herself to do it. This relationship had to end. At least it pushed her to start running faster!

Miranda agreed to go out with Joseph after turning him down several times prior because she had just found out she had one lazy ovary and was getting nervous that her time was running out to start a family. At dinner she could not stop staring at his hair plugs which sparked the conversation of things they were both trying that they never thought they would. She opened up to him about how she was considering freezing her eggs and he literally said to her, “Do we want desperate women having babies at 50?” Excuse me?! Props to Miranda because she had the best comeback against him: “Hey! I don’t need to be lectured about science by a man who’s doing crop rotation on his forehead!”

In season 3 Miranda resorts to speed dating to try and find a decent guy, but she quickly realized that men were turned off by her career. They were intimidated by a successful woman, so she started telling men that she was a stewardess. Of course, it worked right away and she left with Harris Bragen. Unfortunately, it didn’t take long for Miranda to realize that Bragen also lied about who he was! He had told her he was a doctor, but when she cut herself in the morning and he didn’t know how to help her, he’s caught in his lie. She decided not to tell him she also lied, but it’s safe to say these two didn’t make it past their first date.

In season 4, episode 2 titled “The Real Me,” Miranda is shocked to find a man at the gym checking her out. She’s sweaty, wearing no make-up, and an old Hanes t-shirt, but somehow he finds her incredibly sexy. His interest in her gives her a much-needed boost in confidence, so she agrees to go out with him. Unfortunately, when they go on their date and she starts acting “too confident” for him and he loses all interest. Apparently this guy only likes women who are shy and have low self-esteem? These two definitely wouldn’t have been a good match long-term.

Skipper was a character from season 1 who was a friend of Carrie’s and also dated Miranda not once, but twice! He truly was the nice guy who always finished last. In fact at one point in the show he even said: “I’m such a nice guy! Why do women always like a–holes and not the nice guys like me!” We feel bad for him because he meant well and was extremely sensitive, nerdy, and innocent, but he also whined and complained a lot which is not sexy. Despite her not being very nice to him, he was head over heels for Miranda. He even took her phone call while in bed with another woman!

Tom and Miranda found each other at an interesting time in their lives. They were both members of Weight Watchers. Miranda decided to join after she’d just had a baby and was feeling extremely self conscious about her body. Tom was one of the first people she met who made her feel comfortable in the group and they both leaned on each other for support. He seemed like a nice, goofy guy who might have been a great boyfriend, but he was ultra sensitive, especially when it came to anything to do with eating! He stopped talking to Miranda after she gave him an awkward suggestion in bed. At least the whole incident forced her to give up Krispy Kremes?

Before Miranda had her son Brady, she was not a kid person. In fact, in season 2’s episode “Shortcomings,” she talked about how she despised going to the gym on Sundays because children swarmed everywhere for family hour until one Sunday when she met a man named Simon Cobb. She agreed to go out with him even though he had a son from a previous marriage. Their relationship probably would have gone farther if it weren’t for his son, who clearly didn’t like sharing the attention of his father with someone else. Their relationship abruptly ended after his son caught her going to the washroom naked in the middle of the night and she accidentally slammed the door in his face. She tried to plea her case to Roger, but he wasn’t hearing any of it. Maybe if these two had met during a time when Miranda was more open to children it would have worked out.

Walker Lewis was Miranda’s last fling before she entered into motherhood, but once she had Brady she found it was difficult to go back to her old lifestyle. She wasn’t really sure how to approach the whole dating thing, especially when it came to bringing a man home! When Lewis called her up for dinner one night while he was in town she agreed, but was scared to tell him she’d had a baby since he last saw her. At first he seemed fine with it, but when they got back to her place it was kind of hard to get in the mood with Brady screaming at the top of his lungs. We don’t really blame Lewis for leaving.

One of the ladies on Sex and the City were bound to date a hot cop and this time it was Miranda. She met Timothy Gibbs when he responded to a call to help Carrie after she was robbed in the street. Instead of focusing on Carrie’s case (which was definitely a lost cause anyway), he was absolutely smitten with her red-headed friend. Miranda could not fathom that someone so handsome would be interested in her. She thought he was way out of her league, and that made her nervous. These two would have made a great couple, but she botched any chance of being with him after she calmed her nerves with a little too much alcohol and accidentally got wasted on their second date. Instead of leaving her his number, he left her the number for the closest AA meeting!

The girls were intrigued when Miranda ran into ex-boyfriend Josh the ophthalmologist while they were out for a walk. He was cute, had a great job and seemed to be interested in her — so what was the problem? Miranda then shared with the girls that while he was great on paper, he was awful in bed which is why she ended their relationship the first time around. Later on in the episode, she gets spooked about being single at her age, so she decides to give Josh another try. She even tried to teach him how to be good in bed! Sadly, her efforts didn’t work and she was forced to dump him all over again. Poor guy.

There is no denying that Robert Leeds was an absolute catch! If it wasn’t so obvious that she was supposed to end up with Steve, Leeds was who we were all rooting for. They started dating in season 6 and even though he was totally out of her league, their relationship had been going really well until Miranda saw Steve with another woman and realized she was still in love with him. It was heartbreaking to see her break up with him because he treated her and Brady so well. They really did make a great couple, but of course, nothing could get in the way of Miranda and Steve.

It should come as no surprise finding Steve in the number one spot on this list. While they had their ups and downs and definitely seemed like an unlikely match, they turned out to be perfect for each other. Not only are their personalities much different, but they worked on opposite schedules and had different career goals. But even when they both dated other people who were seemingly perfect for them, they couldn’t help but gravitate back to one another. Steve softened Miranda while she pushed him to do better. In the spin-off movies we see Miranda and Steve run into some serious marital trouble, but thankfully they were able to work through it and find their way back to each other again! 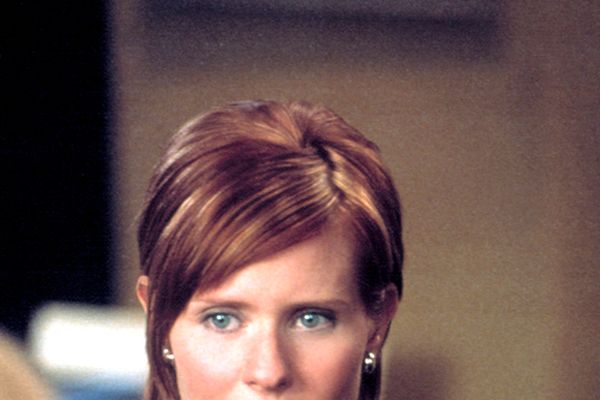