It’s the ho-ho-ho-holiday season in Port Charles! That means romance is wrapped up with a little festive fun and decorative drama! What’s set to unravel in the last month of 2021? Will Jason come back? Will Britt struggle with guilt and grief? Will Carly and Sonny be able to go on? General Hospital (GH) fans just love speculating on storylines! As such, below are some GH plotline predictions for December 2021.

Jason Morgan touched the lives of so many in Port Charles, so it only makes sense that many will miss him throughout December, and especially as the holidays approach. After all, the news JUST hit. Carly will be a mess, Sonny will struggle and Britt will not only feel sad, but also responsible for what’s happened. However, Monica will bear the brunt of emotions.

One could argue that Jason helped bring Drew home. Monica and Drew were super close, and during this past year, she and Stone Cold got back on track with their mother-son relationship. Monica will have such conflicted feelings during the holiday season. She’ll be happy that Drew is back, yet devastated that Jason is gone. Can she not have the twins back together again?

10. Sam’s World Is Flipped Upside Down

Imagine having to tell one of your kids that their dad is alive while telling the other that his dad has passed away? Sam will be a walking mess this holiday season, and who can blame her? She and Jason never really “fell out of love”, so she’ll struggle with his passing. Having Drew pop back onto the scene will also have her questioning her relationship with Dante. Sam and Dante may “play” a happy holiday couple, but Sam will start to push him away.

This is a tricky one to dive into, and something that probably won’t happen in December. There will be a hint that Jason could be alive, as GH won’t allow a main character to completely fall off the canvas without a window of opportunity to return. While the news has hit that actor Steve Burton is out of the soap opera, this part has been recast in the past. With that said, GH will have to do a little searching if they want to play this idea out. Many fans think of Burton as the one and only Jason, so it’s a sticky situation.

Olivia will seek out a specialist’s advice on Leo nearing the end of this month. Fans will likely witness Falconeri’s journey as she helps her son get the tools he needs to thrive. Yes, there will be ups and downs in December, but also a ton of emotion and hopefully some feel-good mother-and-son moments. Ned will be along for the ride, and fans will likely see the Olivia-Ned relationship back on track — just in time for Christmas.

7. Someone’s Bound To Slip Up

Carly’s spidey senses are tingling, and it won’t be long until a small piece of evidence surfaces that will raise an eyebrow for her. It may even unsettle her. Something doesn’t seem right with Sonny when it comes to Nina, and Carly can see he has a soft spot for Reeves. What if she spots a photo that Phyllis leaves behind? Carly will be emotional as it is this holiday season with losing Jason, so falling upon evidence that shows a bond between Sonny and Nina will send her off the rails.

Despite what Carly finds out, Sonny will do his best to cover up his Nixon Falls relationship, especially with Jason gone. Corinthos will be emotional, too, and do all he can to hide his true bond with Nina, so as not to hurt his wife. This secret isn’t coming out anytime soon; however, Sonny will tell many, many lies that will bury him when everything does come out.

5. A Kiss Under The Mistletoe

Could Nina and Sonny kiss? It’s clear that Corinthos isn’t as mad at Reeves as he lets on. Who else likes this “softened” Sonny? Regardless, what if the two get caught up in old memories? Or, they find themselves under the mistletoe? Carly won’t find out about their bond, or the kiss; however, someone else may stumble upon their lip-lock. As they are both supporting Sasha and Brando as much as they can lately, could Baby Corbin also bring them together?

Speaking of, is anyone else’s heart breaking for poor Sasha and Brando? Being a first-time parent is hard enough without medical issues. The health of Brando and Sasha’s little one will be touch-and-go for many weeks in December. Sasha herself will find it hard with recovery. However, there’s a good chance that Baby Corbin will come home just in time for his first Christmas, giving GH fans a feel-good holiday moment.

3. Valentin and Anna Will Bond Amid Tragedy

Valentin will struggle as he processes how BLQ could lie to him about Bailey. He’ll likely also have to deal with a confused Charlotte. The good news is, Anna will help him along the way. The situation may even bond them further. Fans should expect Valentin to awkwardly drop off some holiday gifts for Bailey at the Quartermaine mansion. He didn’t find out about this until the end of November, and knowing Cassadine, he likely started shopping for the little girl in the fall.

2. Getting A Little Closer

Brook Lynn and Chase will bond nicely throughout their Bailey lie. It’s natural and normal. Harrison will have to spend more time with the little one to make their scheme look believable, which means more time with BLQ. Mix in all of the cute holiday moments with baby, mom and “dad”, and these two could find themselves developing “feelings”, which they’ll deny and ignore (of course).

Peter will escape custody, leaving Maxie to continue the Bailey charade. She’ll be devastated that she can’t spend Christmas with Louise, and the entire predicament she’s in. Could Dr. Austin help spread a little bit of holiday cheer into her life? It’ll be hard for Jones to enjoy the season, but the silver lining is that Harrison and Brook Lynn will make sure Maxie is there to see Louise during the baby’s first holiday highlights. 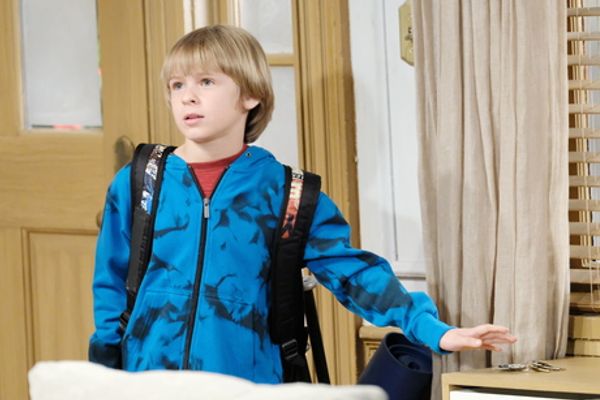