Will Nina and Sonny cross paths? Why are Carly and Anna teaming up? Will Michael and Sasha solidify their romantic reunion? Will Cameron be alright, moving forward? There’s nothing General Hospital (GH) fans love more than speculating on “what’s next”! As such, below are some GH plotline predictions for March 22 to April 2, 2021.

GH spoilers for the week of March 29th tease that Carly and Anna will team up! What could this be about? Sounds like they are working towards a common goal. Carly wants to clear Jason’s name, and Anna wants to snag Peter, so could their alliance be centered around Franco’s shooting? That sounds about right!

11. Kill Two Birds With One Stone?

Will Anna and Carly be able to kill two birds with one stone … or maybe three? Not only could they clear Jason of the charges, but also nail Peter, and Cyrus Renault, as well. For Carly and Anna to team up, they may find a piece of evidence this week that leads them in the right direction. If anyone can get to the bottom of things, it’s these two!

All arrows are pointing to the idea that Nina will discover Sonny is alive. She’s set to visit Phyllis in the coming days, and there’s a good chance that she’ll run into “Mike”. He’ll believe he knows her from somewhere, and Reeves will think on her feet. She’ll go back and forth on whether or not to go to Carly with this information; however, when all is said and done, she’ll decide to keep it to herself. In Nina’s mind, it’ll be the payback that Carly and her family deserve.

Michael and Sasha will try and reconnect this week. They’ve been toying around a reunion and spending more time together. With that said, it seems as if they’ll realize that too much time has passed to pick up where they have left off. They’ll end things off amicably, but it might be Michael who realizes that he can’t be anything more than friends with Sasha because he has feelings for Willow.

8. Brando and Sasha Get A Little Closer

GH spoilers for the week of March 29th hint that Brando and Sasha will continue to bond. Yet another indication that things probably won’t work out with Sasha and Michael. Brando will confide in Sasha next week, so it seems as if these two could be inching towards a romance.

Chase is going through a lot right now, but GH spoilers for the week of March 29th reveal that he or Willow will realize that they can’t go any further in their relationship. Will it be Chase? He’s so conflicted with everything that is going on in his life. It could also be Willow, especially if something happens between her and Michael in the coming days.

Willow could pull back from Chase. If Michael realizes he has feelings for her, he may not want to waste another minute. After all, he’s lost his grandfather, his dad, and with Franco’s recent passing, Corinthos may feel as if he needs to live life to the fullest. If he confesses his true love to Willow, this could leave her realizing that she too wants a life with Michael and not Chase.

GH spoilers reveal that Olivia will be heading to the hospital this week, while Ned will be doubtful. Could BLQ have a medical emergency scare? Will it have to do with the baby? Ned may feel as if Brook Lynn is doing this for attention, while Falconeri will be far more concerned. Better to be safe than sorry when it comes to health and her little one.

4. BLQ Aims To Smooth Things Over

GH spoilers hint that Brook Lynn will try and smooth things over with Ned and Olivia the week of March 29th. After all, she may feel partly responsible for why her dad and stepmom are having issues. Can she help? With Leo’s attachment to Ned, Olivia may be open to reconciliation. She loves Quartermaine too, and BLQ might be able to help her see the light and why coming together with her husband is a good idea.

3. Curtis Sees Something He Shouldn’t

Across town, GH spoilers reveal that Curtis bears witness to something that will make him feel uncomfortable. Does this have to do with Jordan or TJ? Could he see Jordan being affectionate with Taggert? He’s pretty close to Sam and Nina, so could Curtis see Jason and Britt kiss? Or maybe Jax and Carly get too close for comfort?

Cameron’s been shaken up as of late. Not only did he lose Franco, but being visited by his father’s ghost was major for the young man. Laura will notice an attitude change in Cameron this week, and Josslyn will also be concerned about him the week of March 29th. Cam and Liz will also get into it the next two weeks, so is Cameron headed on a dangerous path or a good one?

1. Warning For Ava and Nik

Nik and Ava will receive a warning of sorts the week of March 29th. Could this be from Ryan? All medical experts seem to believe that he’s unresponsive, but is Chamberlain brilliant enough to fool the doctors? Or could this be someone else? What if, Ryan pulled the switcheroo with Kevin before he fell into a coma? What if Ryan is really Kevin, and poor Mr. Collins is the unconscious one? 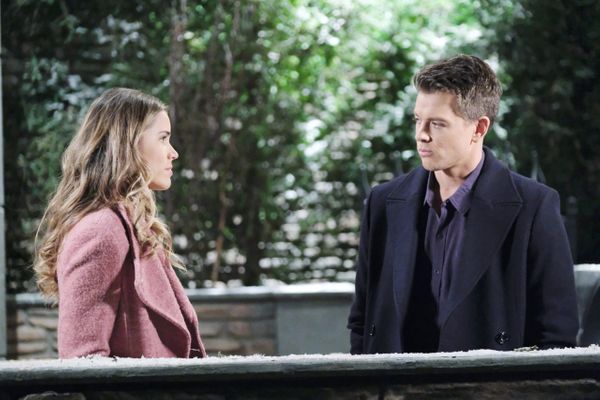