General Hospital Plotline Predictions For The Next Two Weeks (November 8 – 19, 2021)

Will Ms. Wu offer a warning to Sonny? Will Liesl, Britt, Jason and Drew make a great escape from Greece? Will Austin find out about BLQ’s secret? What will he do when he finds out? General Hospital (GH) fans just love to speculate. As such, below are some GH plotline predictions for November 8th to November 19th, 2021.

12. There’s No Scaring Joey Novak Off

This week, Ms. Wu will have a meeting with Sonny. In that meeting, will she offer up a warning about Joey Novak? Corinthos may believe Novak has been neutralized, but any avid soap opera fan can see from a mile away that the mob drama is just starting to heat up. Novak is down, but certainly not out.

11. Phyllis Reveals Something To Carly

Carly knows something is off, and in the next couple of weeks, she’ll continue to get that vibe. GH spoilers for the week of November 15th note that Phyllis will tell Carly something that piques her curiosity. Mrs. Corinthos won’t learn the truth about Nina and Sonny, but she will inch closer to realizing that the two didn’t just know each other — they had some form of a relationship. Sonny may be able to brush it off, making it seem as if they were only “friends”, but Carly will be relentless about this, moving forward.

10. The Great Escape From Greece

Britt, Liesl, Jason and Drew will escape from Greece in the next two weeks. Obrecht and Britt will figure out what keyword Peter is using to trigger Cain, and use that against him. They’ll be able to stop Drew from doing any harm to Jason, or anyone else. In the end, they’ll all head to Port Charles during the week of November 15th to reunite Drew with his family (finally).

Austin will poke Gladys for the truth, and Ms. Corbin will reveal all about BLQ and the baby. He’ll make sure to get her a little tipsy, or find her tipsy, to get all the juicy details. Once Austin finds out that Bailey isn’t Valentin’s child, he’ll devise a plan to expose Brook Lynn. It’ll be his revenge on her for what she did to him. Sadly, his scheme will hit a snag.

Somehow, Maxie and BLQ will learn about Austin knowing the truth. Brook Lynn will freak out, but Jones will believe that telling the good doctor the truth is the best way to stop him. Before Austin has a chance to meet with Valentin, Maxie will approach him. She’ll tell him all about her and BLQ’s plan to keep Louise safe from Peter. Austin will have an “a-ha” moment about their “friendship”, and promise to keep this secret for the sake of Maxie and her baby.

7. Chase Starts To Connect The Dots, Too

GH spoilers imply that Chase will start to connect some dots. Will he, too, learn the truth about Bailey? As much as the women may try to hide this from him, he and BLQ have a nice friendship and connection. However, Brook Lynn’s instincts are to lie. Will both Austin and Chase be brought into the baby-swap loop this week? Austin will learn the truth, for sure. Although Harrison will know something’s off, Brook Lynn will cover her tracks by lying to him. It’ll be a thorn in their potential relationship.

6. Brando and Sasha Welcome Their Baby To The World

Speaking of babies, GH spoilers for the week of November 15th hint that Baby Corbin might make an appearance. Finally, an infant born in the little town won’t be swapped, stolen or harmed… Hopefully, that is! Sounds like there will be zero drama around the little one’s arrival, which is a nice change from the norm when it comes to the land of Port Charles.

It feels like fans will get closer and closer to finding out Esme’s connection to Ryan. GH spoilers for November reveal that the audience will learn the truth about Ms. Prince this month. With last Friday’s cliff-hanger, it’s clear viewers will learn exactly what Esme’s connection with Chamberlain is. The two are likely related; it would make sense, the way she held hands with the mass murderer. Unless… could Ms. Prince be an obsessed fan of Ryan’s work?

The gallery event is scheduled for the week of November 15th, and it’s hard not to think that something will go wrong during the exhibit. There’s a good chance that Esme schemes to ruin the entire thing, not only to get back at Trina, but also Ava Jerome. Will there be a hint of Ryan in the air? Will something get bloody and gory; reminiscent of a murder Ryan once committed? Will someone get hurt during the shindig?

3. Curtis Finds Out The Truth

GH spoilers tease that Curtis could find out that the mystery man following him is his biological father during the week of November 15th. The man seems very harmless and likely wants to apologize to Curtis for what he’s done. He’s probably also looking for a relationship with his son. Will Curtis let him in? Not right away. Cue the father-son drama…

2. Finn Plans Something Romantic For Liz

According to GH spoilers, Liz will be floored when she arrives home this week, and this might be linked to Finn. Could he organize sleepovers for all the kids and plan a romantic evening for Elizabeth? Will the two share a kiss… maybe even more? They’ve been dancing around this possibility for a while now. Perhaps it’s time to dive right in.

1. Olivia Will Finally Agree To Seek Help For Leo

GH spoilers hint at some scenes between Robert and Olivia over the next two weeks. There’s a good chance that Scorpio will convince Falconeri to take her son to the specialists that both Austin and Ned advised about. But the bigger question is, will they share another kiss? This could go many ways; however, it’s likely that Olivia will stay with Ned and remain friends with Robert. He’s a good friend to have. 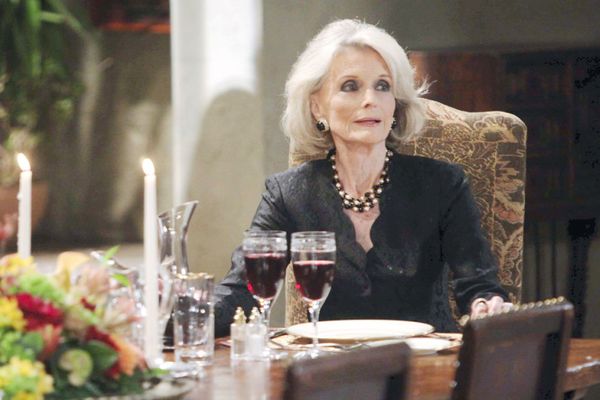