Calling all General Hospital (GH) fans! What’s set to unfold in the land of Port Charles over the next two weeks? Jason gets help from Brick, while Nina and Ava compare notes. Plus, could Sonny return to the little town soon? Learn more about these and other storylines in the below GH spoilers for June 28 to July 9, 2021.

Starting GH spoilers with a bang! Jason will need some help this coming week, and Brick will be by his side. Meanwhile, as the days go by, Stone Cold will have a major decision to think through. Does this have to do with how he’ll run the Corinthos organization moving forward? Will Carly be involved in any capacity?

Speaking of Jason, GH spoilers for the week of June 28th hint his BFF Carly will ponder something as well over the coming days. First, she’ll reach out to Diane and invite her over for some advice. As the week rounds out, Carly will gather her family together. Does she make a big announcement, and if so, what has she decided?

Across town, Ava and Nina will compare notes about some recent events. As the days go by, Jerome will get some unsettling news, while Nikolas will turn to his stepdad, Kevin, for a confidant. Meanwhile, Laura will be quite worried about Nik, as the weekend hits. Will he be acting out of character, or does she find out information that concerns her?

According to GH spoilers for the week of June 28th, Nina will feel conflicted about the future. She’ll be pondering a decision, and seemingly go “back and forth” on an idea. As the week of July 5th approaches, added teasers hint that Phyllis will “push” Mike/Sonny into heading to Port Charles to visit Reeves. Will he take her advice?

GH spoilers for the week of June 28th note that Anna and Valentin will be stranded. As the days go by, added teasers hint that something will pique Devane’s curiosity. In interesting news for the week of July 5th, it seems as if some sparks will fly between Valentin and Anna! This is something many fans have been waiting a long time for!

GH spoilers for this week imply that Dr. Austin will try to help Anna and Valentin, at some point. As the days progress, he’ll run into Ava. Will the two become friends… maybe something more? Added teasers for the week of July 5th suggest that the good doctor will also reach out to Carly. It seems he’ll be quite curious about the Michael Corinthos Wing at General Hospital.

GH spoilers for the week of June 28th indicate that Cameron will “call out” Josslyn in the coming days. Will these two ever be the friends they once were? Meanwhile, Joss will have an “awkward” run-in with Michael this week. In other news, Michael will try to make sense of a confusing time. Surely, this has to do with Willow.

Speaking of Cameron, GH spoilers for this coming week reveal that Portia will be taken aback when she runs into Curtis at the teen’s party. Added teasers for the week of July 5th note that Curtis won’t be pleased when his Auntie Stella tries meddling in his business. Sounds like the same-old, same-old with these two!

Across town, GH spoilers state that Finn will believe it’s time to rethink things. Could this be about Anna, or something else? Added teasers hint that Hamilton will run into Scotty Baldwin, who will give him some interesting advice. The lawyer will tell the doctor to do “whatever” is best for his family. What could this be all about?

GH spoilers reveal that Britt and her mom will have a heart-to-heart this coming week. Sounds like these two are finally inching closer to each other again. Meanwhile, added teasers for the week of June 28th suggest that Brad offers Britt some support when his BFF reaches out. It’s nice that after all they’ve been through, these two are still tight.

GH spoilers for the coming days note that Gladys will be feeling better and fully recovered from her recent shooting. Why? Well, she’ll decide to take the time to push Sasha’s buttons. Isn’t there a law against provoking an expecting mom? After all, the young woman is carrying Corbin’s grandchild! Maybe she should ease up on her?

Jax and Nina won’t have the best run-in this coming week, while Lucy Coe will be stunned by something that goes down. Rounding out GH spoilers for the week of July 5th, Alexis will still be in solitary confinement, and she’ll have a very hard time dealing with her new, harsh reality. 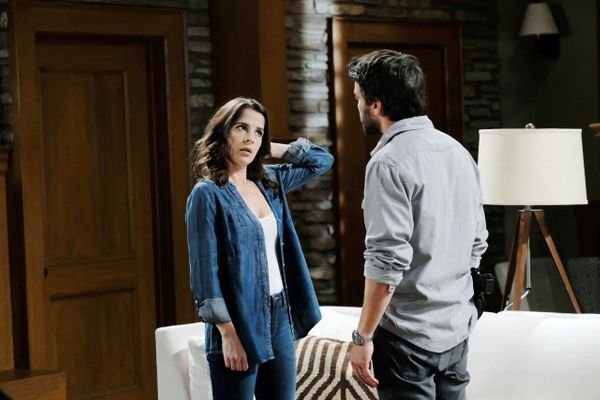 We Weigh In: Could Dante And Sam Become General Hospital’s Next Big Super Couple?