Calling all General Hospital (GH) fans! What’s on tap in the land of Port Charles over the next couple of weeks? Valentin stuns Brook Lynn, while Peter and Maxie come to a decision. Also, Anna reaches out to an old friend. Learn about these storylines and others in the below GH spoilers for May 17 to May 28, 2021.

GH spoilers for the week of May 17th reveal that Valentin will suggest something that stuns BLQ. Could this have to do with moving into the Quartermaine mansion? Meanwhile, added teasers for the week of May 24th hint that Cassadine will make his intentions clear to Peter August. Hasn’t he already done that, or does Valentin have another scheme up his sleeve when it comes to his nemesis?

Speaking of Peter, GH spoilers for this week note that he and Maxie will make a decision regarding their baby. Will she be induced earlier, as suggested by the doctor on Friday? As the week of May 24th approaches, added teasers imply that BLQ will be eager to hear from Jones. Will the women be able to pull off their baby-swap plan after all?

GH spoilers for the week of May 17th indicate that Anna will reach out to an old friend for some help. As the days go by, she’ll hear some awful news. Could it be about Sean Donely? Sounds like this storyline could help build up to the special episode airing later in the week on Friday, May 21st.

This Friday’s show will celebrate the late actor John Reilly, who once played Sean Donely on GH. Port Charles residents will mourn the passing of the WSB agent, while also trying to solve a mystery surrounding his daughter Annie (played by Reilly’s real-life daughter, Caitlin). Could this also be connected to Chase’s storyline? Will Anna ever find the antidote that Finn needs?

As the days go by this week, Chase will be doing better; however, GH spoilers do note that Finn will be concerned about his well-being. Added teasers for the week of May 24th hint that Chase will be grateful for all that Michael has done. Sounds like he won’t be in the loop around Millow’s reunion, but Harrison will probably be on the mend by then.

GH spoilers for the week of May 17th suggest that Sasha will continue to try and distance herself from Brando. As the days go by, Sasha will try and see her current situation as a new chapter. By the time the weekend hits, Brando will save the day for Sasha, so perhaps the two will come back together in no time.

GH spoilers note that Britt will sense a “fight” is on the horizon in the coming days. As the week of May 24th hits, added teasers reveal that she’ll anxiously await some news. Does this have to do with Jason? Meanwhile, in Port Charles, Dante will “call out” Sam on her recent behavior. Sounds like these two will continue to butt heads.

Over at the Corinthos compound, GH spoilers suggest that Carly will confide in Diane. There’s no one she can trust more at this point. As the days go by, Mrs. Corinthos will take a meeting with Gladys Corbin. Can these women both find a way to land on the same page?

GH spoilers for the week of May 17th imply that Sonny will form a connection. So he and Nina get a little closer (wink, wink). As the days go by, he’ll feel sympathetic towards someone’s situation. Added teasers for the week of May 24th reveal that “Mike” will have some major worries around Nina’s safety. Could Elijah be the cause for concern?

GH spoilers suggest that Laura and Cyrus will meet in the coming days. Renault will tell his sister exactly where he stands. Sounds like he’ll be pushing some of her buttons. Later this week, Nik will have a plan, and Laura will be more than ready to give it the “okay”. What does this mother-son team have in mind?

GH spoilers note that Alexis will feel good about a decision she makes in the coming days. She’ll be celebrating a small victory, so hopefully this has to do with Shawn Butler. Speaking of Butler, TJ will try to reconnect with his dad, but will things go as smoothly as fans hope they do?

GH spoilers for the coming days note that Liz will get confrontational, but who will she direct her anger at? Peter better stay out of her way! Lastly, Olivia will have to contend with an unwanted houseguest! Could this be Valentin or Charlotte? Cassadine might be a pill to deal with, although Charlotte can be a handful at times, too. 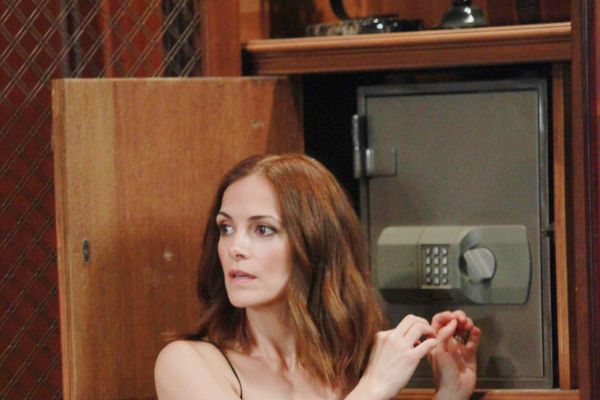