Calling all General Hospital (GH) fans! What kind of drama should viewers expect over the next two weeks? Carly will struggle to get over something, while Chase notices that Sasha doesn’t seem right. Also, Spinelli is not giving up on nailing Peter. Learn about these storylines and others in the GH spoilers for October 19 to October 30, 2020.

GH spoilers hint that Carly will struggle this week. She’ll head over to the police station, and added teasers imply she’ll have a hard time moving forward from a situation. Could this be about Nelle and Carly’s role in her demise? In other news, Carly and Nina will argue over something.

Speaking of Nina, according to GH spoilers, Valentin will be more than happy to help her out with something this week. As the days go by, related teasers reveal that Cassadine will feel exonerated over a situation. In other Valentin news, he and Brook Lynn will meet for drinks in the coming days.

As per GH spoilers, the week of October 26th will bring insight to Anna, as she’ll receive some answers. Could this be about Peter, and who his bio mom really is? Speaking of Peter, Spinelli will double-up efforts to nail August that week. He’s playing nice-nice right now, but there’s nothing Damien wants more than to expose him.

GH spoilers indicate that Sam and Alexis will clash this week. Is this about Alexis drinking again? In other Sam news, she’ll turn to Sonny for some help in the coming days. Could this be about her mom, or something else? Meanwhile, Sam will also be looking to fill a role at Aurora Media.

6. Monica Gets Pulled Into The Mix

GH spoilers state that Ned will confide in Monica this week. As the days go by, Monica will encourage Ned to “make things right,” so there’s a good chance she may instruct him to tell Olivia the truth. In related teasers, Lulu will feel very torn in the coming days.

GH spoilers hint that Julian will lose his temper in the coming days. A lot is going on in Julian’s world, from Cyrus wanting to partner up to Sonny looming, the baby switch secret, plus Ryan Chamberlain. Jerome is bound to snap. In other Julian news, he’ll receive a dire warning from someone this week.

Across town, GH spoilers reveal that Cyrus’ connection with Britt will become “clear” in the coming days. Could these two be related in some way, or is Cyrus blackmailing Britt? Maybe he is promising her something in return for doing all his dirty work? Regardless, a link between these two will be revealed this week!

GH spoilers for the week of October 19th imply that Brando will decide to move forward with his plan. Does this have to do with Cyrus? If so, Brando should be careful. Mind you, he does have Sonny and Jason on his side. Speaking of, in other GH teasers, Jason will find out about Mike’s will this week. Could Stone Cold be included in it?

Dev has been working overtime this past couple of weeks to convince Josslyn and Cam that they shouldn’t be together. GH spoilers indicate that Dev will be back on that boat this coming week, as he manipulates Josslyn. It’s only a matter of time before he gets caught! In other teasers, Michael is given a new opportunity.

During the week of October 19th, GH spoilers reveal that Chase will go over Jordan’s head, as Jax and Curtis will reach an agreement about something. Rounding out GH teasers for the week of October 26th, Portia will offer up a helping hand to Franco. Will she give him some marriage advice? 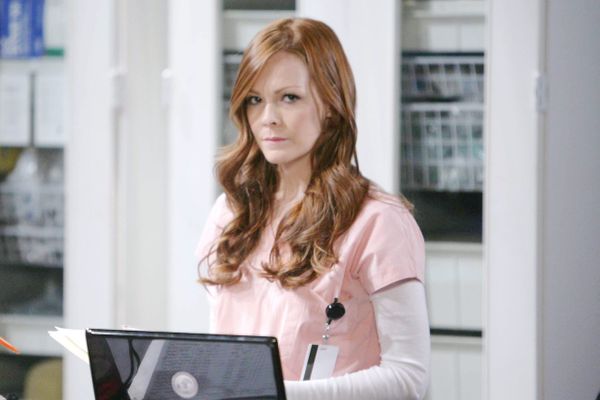