The Duchess of Cambridge Kate Middleton is one of the world’s most renowned style icons of all time. The Duchess never steps out looking anything less than flawless and has created a defined style filled with preppy blazers and chic tea dresses. Although we love the polished and feminine vibe of her look, she surprisingly didn’t always dress this way! While dating Prince William and prior to the engagement it was clear that Middleton was still quite young and naive when it came to royal etiquette, and her clothing definitely reflected that. We still appreciate the style moments where Kate stepped out in short hemlines and baseball caps, but we have an inkling that the Queen wouldn’t feel the same! Follow along as we recall 20 risky Kate Middleton looks that we’re sure the Queen found quite questionable!

Wide leg trousers and culottes are a modern trend and something we’ve seen Meghan Markle wear on multiple occasions. Kate Middleton, however, tends to be more classic with her style, which is why seeing her step out in wide leg trousers was quite a surprise. Since this trend is quite modern and stylish, it’s likely the Queen would have preferred to see Kate step out in a tea dress or more timeless slim fit trousers. 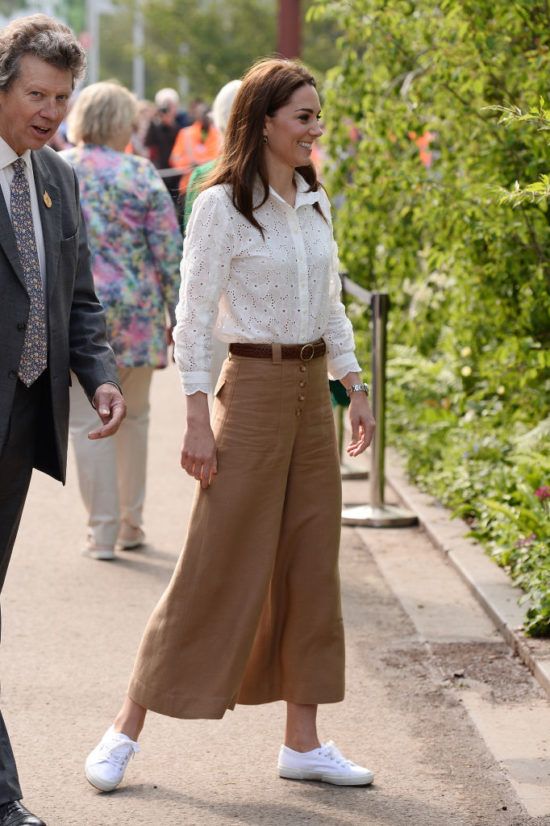 Low rise jeans were a huge trend in the early 2000s, which is around the time Kate Middleton and Prince William began dating. She is photographed here in her college days at St. Andrews looking just about as casual as we’ve ever seen her. A cami tank top, jeans slung around her hips and a tousled updo. We’re certain the Queen would not love seeing the future Duchess walking in public looking so casual! 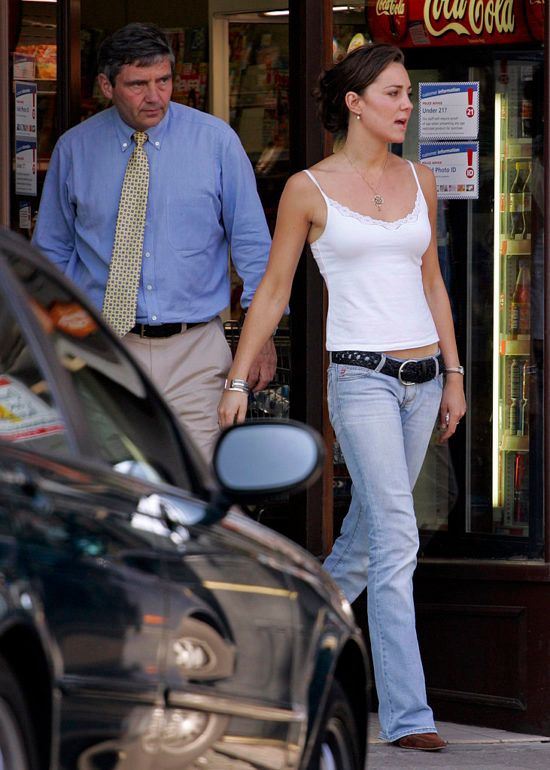 While to the general public, rainboots are a practical and comfortable option on a rainy day, we can’t imagine the Queen feels the same way. Kate Middleton was spotted in 2012 at The Golden Metropolitan Polo Club wearing casual green rainboots that became her go-to pair throughout the years. 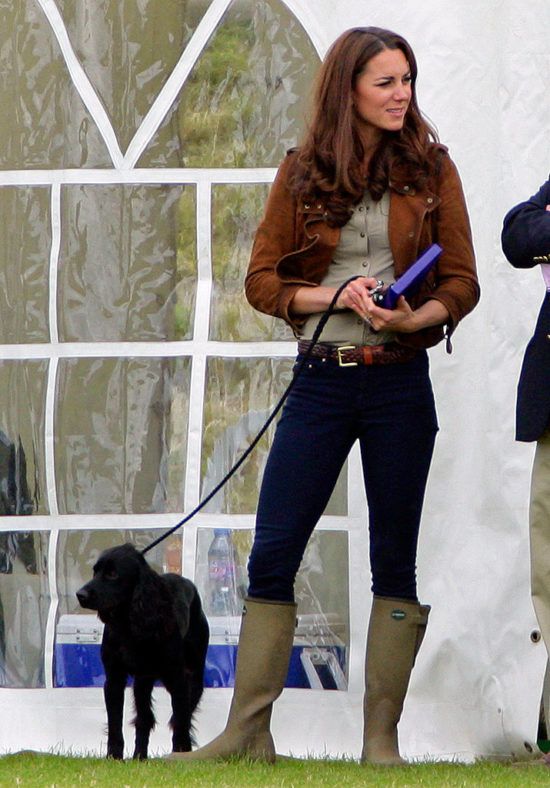 The Queen is known for her extravagant wardrobe of designers in every shade of the rainbow. While Kate Middleton definitely loves a good designer piece, that doesn’t mean she strays away from high-street brands either. We’re quite certain the Queen would have something to say about the $50 J.Crew sweater Kate wore while visiting the Scout Association’s UK headquarters in Gilwell Park. 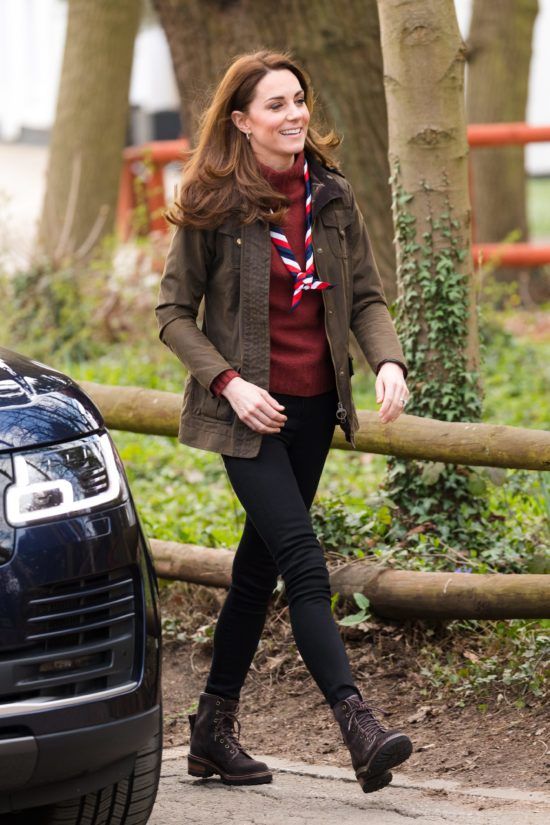 The Queen is known for her fashion trick of having weights sewn into the hemline of her dresses. This is to avoid having any wardrobe malfunctions on a windy day and ensuring her dress stays put. Back in 2011 when Kate was still a newbie to the Royal family, it was clear she didn’t follow this rule and had her dress fly up on more than one occasion! 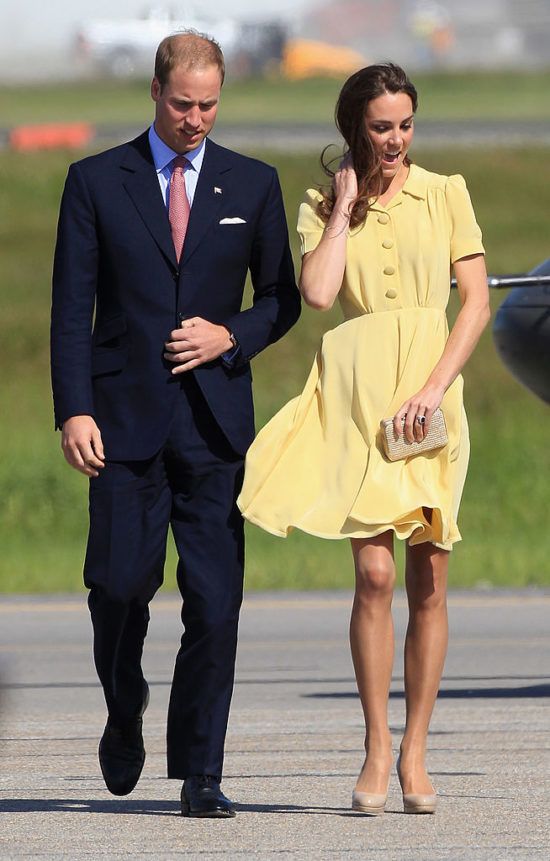 In 2012, Kate Middleton and Prince William visited the Solomon Islands while on an official Royal tour. It’s typically expected that the Royals dress to honor the country they are visiting by wearing local patterns and colors. In a major fashion flub, the Duchess accidentally wore a dress by the neighboring Cook Islands to an official Soloman Islands dinner. We’re quite certain the Queen would not have been happy with this mishap! 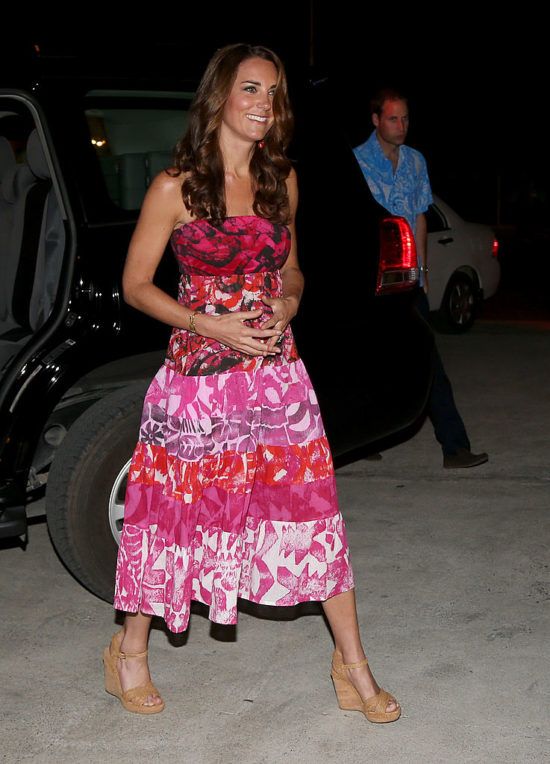 Even Kate Middleton went through a party-phase it seems based on this snapshot from her past! The photo was taken back in September 2008 for an ’80s themed roller disco party she attended with a friend. Clearly, the look wasn’t something Middleton would wear on a regular basis out on the streets, but we’re quite certain the Queen would want these photos of the now-royal buried based on the somewhat scandalous attire she is wearing. For any other celebrity, a look like this wouldn’t be questioned, but for a soon-to-be royal, a look like this definitely put Middleton in the hot seat for scandal. 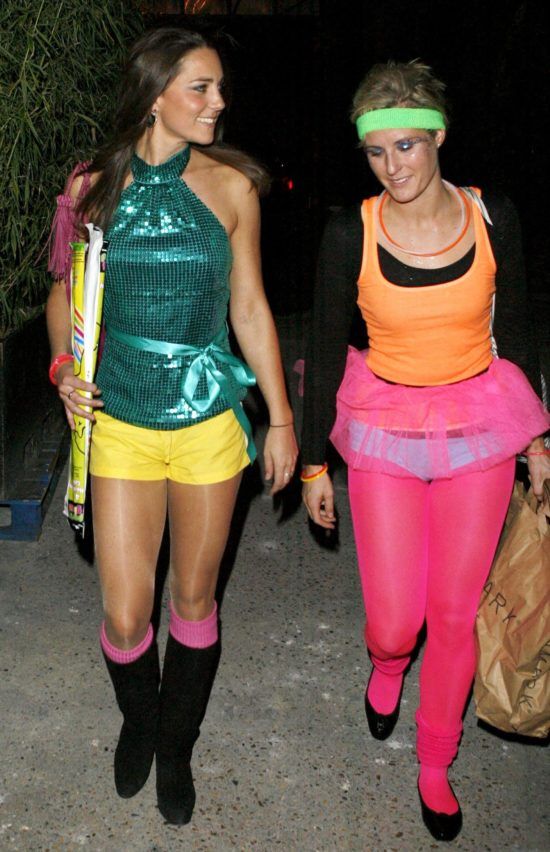 The Queen is clearly a fan of color, but only when it’s on a tailored suit or outerwear piece. These coral pink jeans that Kate Middleton wore in March 2012 would definitely be a look that the Queen would find slightly garish. The bright pop of color is, in our opinion, a nice touch during the warmer months to liven up an outfit; however, we’re quite certain the Queen would have preferred Kate to wear a colored jacket or purse rather than a pair of jeans. 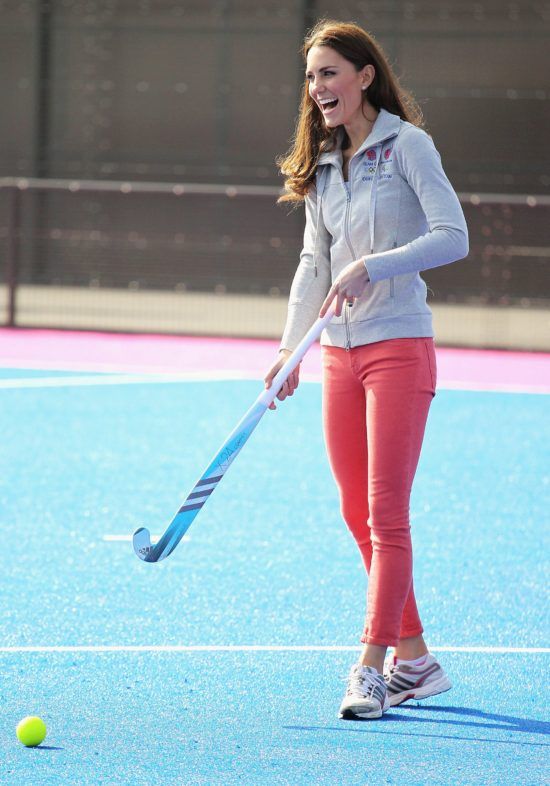 The Queen is definitely no newbie when it comes to hats, but only when it comes to traditional British fascinators. The ever-casual baseball cap is definitely not a look we’d see the Queen in anytime soon and we can presume she wouldn’t approve of her daughter-in-law stepping out in public wearing one either. We get the practicality of rocking a ball cap when sailing, but we’re not sure the Queen would view the royal style error in this light! 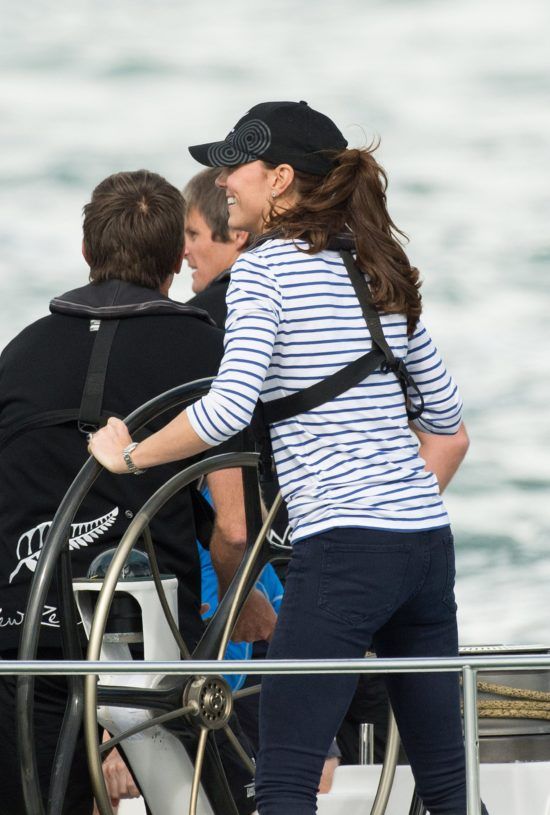 During her pre-royal days, Kate Middleton definitely had a more casual take on style. Even then, however, she managed to look straight out of Ralph Lauren catalog with her cable knit sweater, polo t-shirt and crisp white mini skirt. The look definitely suits her, but we’re not convinced it’s suitable for a royal in waiting, especially when it comes to her slouchy boots! The Queen is quite strict with her 2-inch round toe heels, so we presume she expects the same of her family. The sloppy boots definitely wouldn’t have received the royal stamp of approval and are a look that Middleton officially retired after marrying into the royal family. 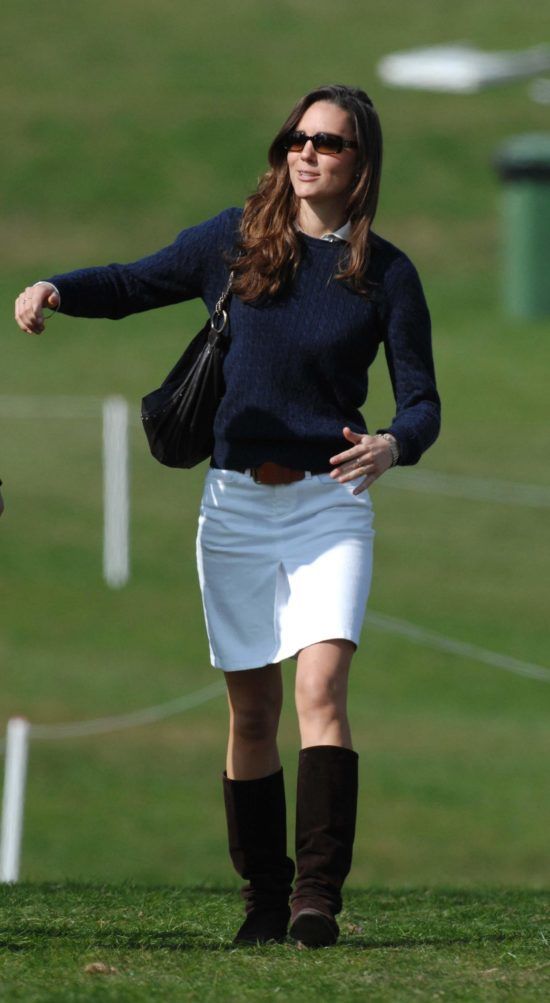 It’s no surprise that the Queen preaches for royals to wear high, modest necklines while out in public, but we’re not entirely sure that Kate Middleton agrees with this practice! This particular velvet look Kate wore for the Sun Military Awards in 2011 definitely caused quite a stir at the time because of its figure-hugging shape and strapless neckline. The dress was definitely more suited for a celebrity than a royal figure, but nonetheless, we think she looked gorgeous. The dress made headlines for being inspired by her late mother-in-law Princess Diana. 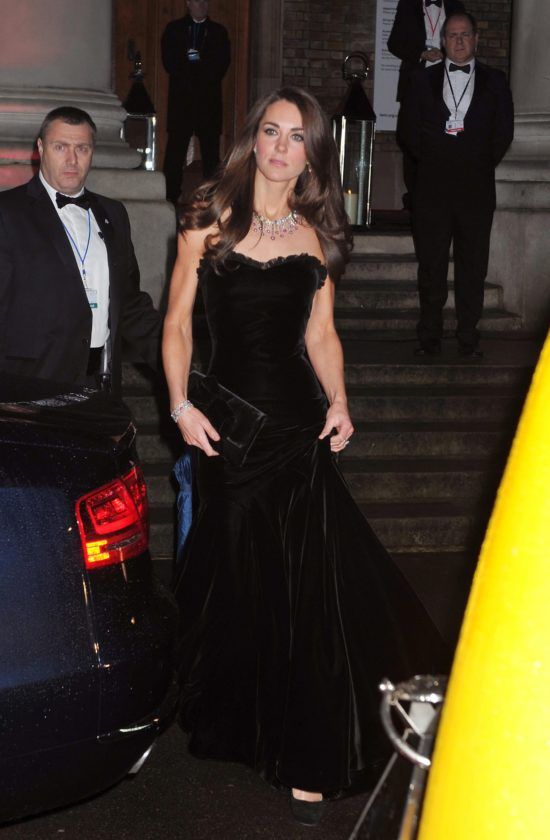 Back in 2007, Kate Middleton and Prince William were simply dating and the royal rules of dressing technically didn’t apply to Kate yet. With this look, it’s clear she’s still quite young and isn’t afraid to rock a casual denim and a low maintenance white top. Although she still looks polished with her tailored coat and prim blouse, we’re not entirely sure the Queen would love the low-slung cut of her jeans. This was definitely a huge trend in the 2000s, but whether low-waisted jeans are appropriate for a royal or not is definitely questionable. 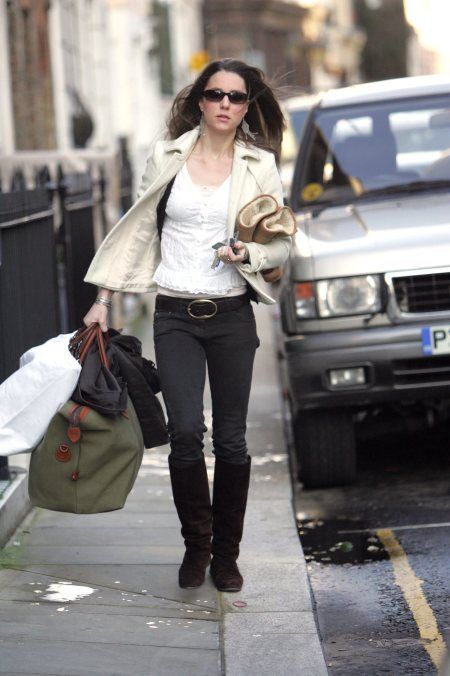 Queen Elizabeth is undeniably a fan of bold fashion, but rather than texture or embellishment she often opts for a simple bright color. It’s an unspoken style rule that royals dress to shine when they make a public appearance, but it seems that Kate may have taken this a little too literally when she stepped out at the Tusk foundation gala dinner wearing this sparkly number. Her look involved head to toe glitter, which we think looks absolutely fabulous on her, yet we’re not sure the Queen would agree! The typically polished and prim Princess Kate definitely took on a more sultry and glam style this evening. 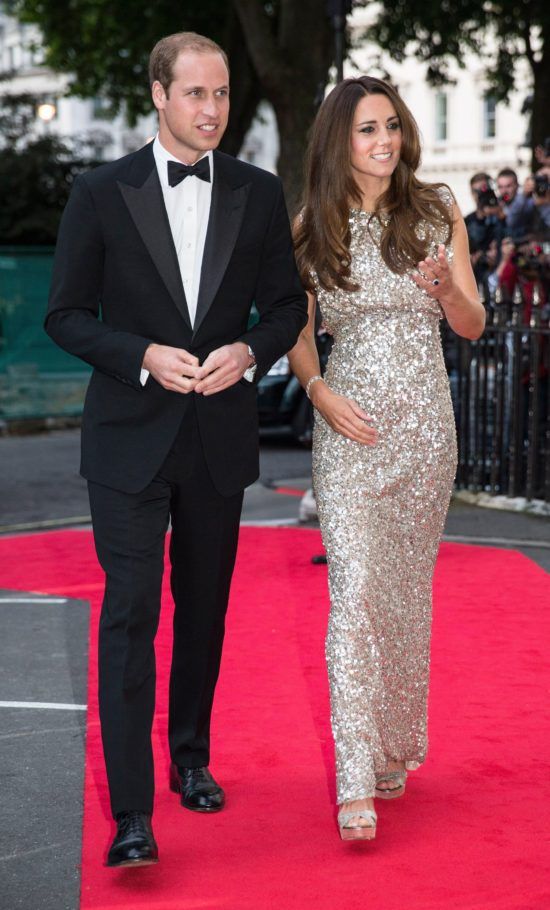 One of the Queen’s biggest style rules is that a royal must standout when she arrives at an event. For her, this always means donning a bright color and she is rarely spotted wearing anything neutral. Kate Middleton, however, has made shades of black and navy a regular color palette in her wardrobe. Black is one of fashion’s most dominant and flattering colors so we definitely can understand why Middleton tends to opt for it, but we’re not sure the Queen would see it this way! 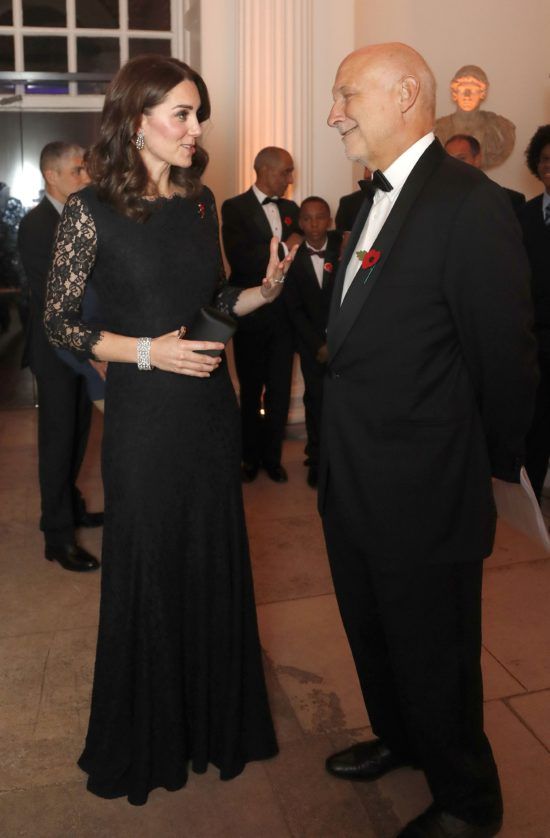 Kate Middleton is eternally refined, even when it comes to her casual wear. She typically opts for a pair of dark skinny jeans and a variation of a cashmere sweater; however, she recently stepped out wearing one of her most casual looks yet with a ski jacket and pair of side-stripe athletic pants. This look is undeniably one of the most relaxed we’ve seen from a royal, but even so, she still looks gorgeous! We just don’t think we’ll see the Queen step out wearing track pants anytime soon. 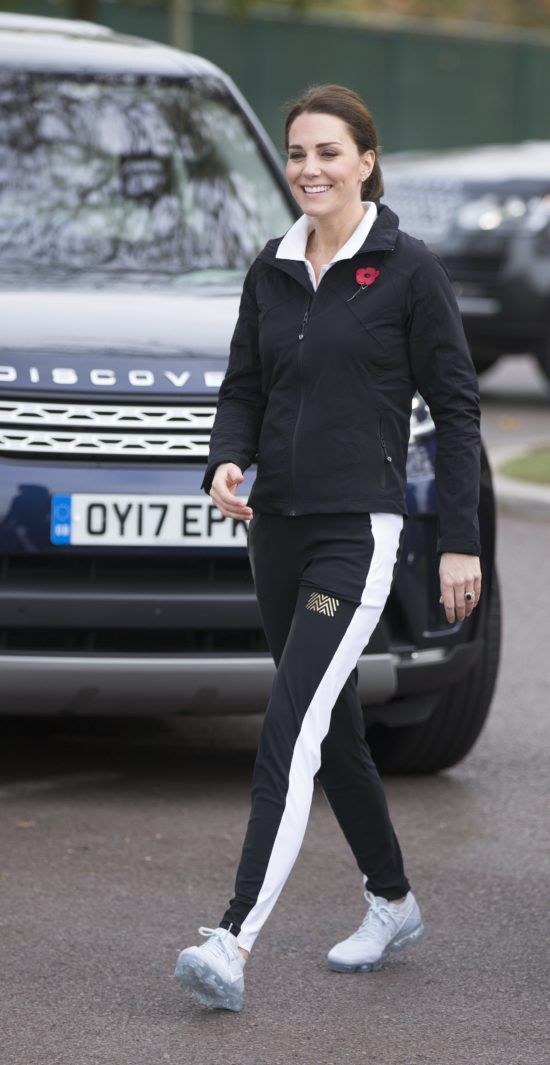 This look is admittedly not one of Middleton’s riskiest, but it was undeniably a little scandalous when it comes to royal standards. The white garment featured sheer cutouts in every direction covering the entire length of the dress. A look like this would definitely require a slip underneath and despite reaching down to her ankles, it was definitely quite risque, especially with the off-the-shoulder neckline. 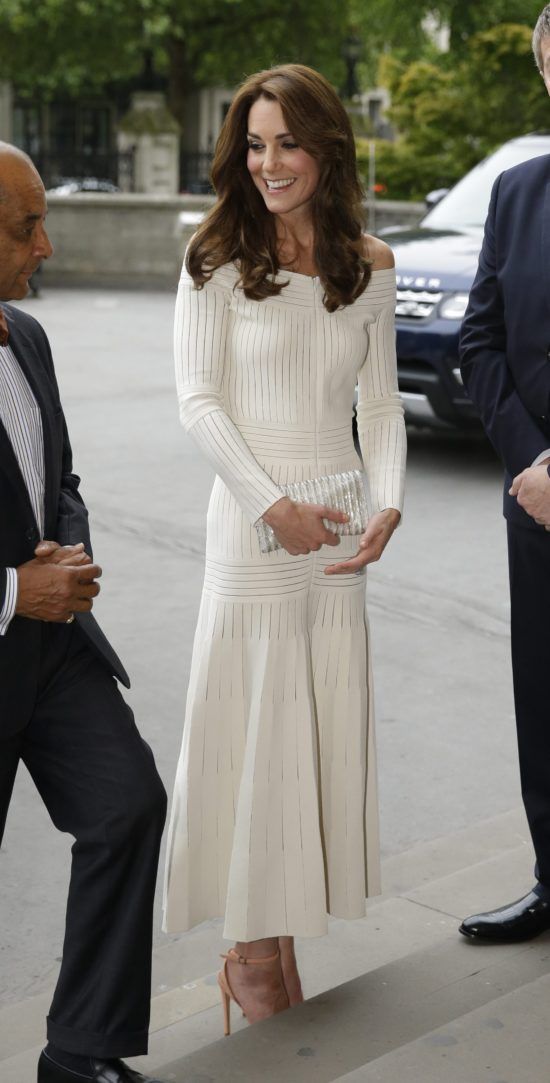 Another one of the Queen’s biggest royal style protocols surrounds dress length and hemlines. Although Kate Middleton is typically quite cautious to wear modest tea dresses that reach past her knees, there have also been a few occasions where she let the rule slip and wore something a little more risque and thigh-baring. This look, for example, definitely broke the Queen’s rules and showed a little more leg than acceptable for a royal. 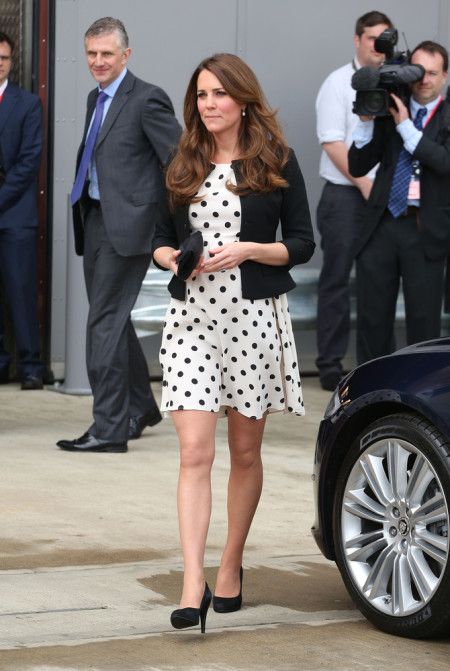 In 2014, Kate Middleton left the Natural History Museum in London rocking an absolutely striking powder blue gown. The Cinderella-inspired look is definitely one of the most glamorous we’ve seen Kate in, especially with the dramatic high-low hemline and train. Although we are huge fans of this stunning dress, we can’t say the same for the Queen who apparently disapproves of short hemlines of any sort, high-low included! 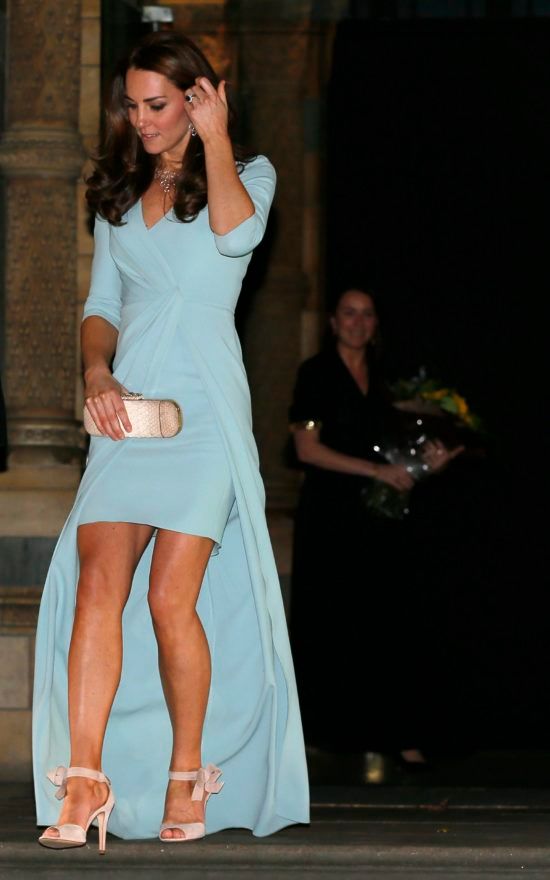 This western-inspired look is quite an obvious outfit that the Queen wouldn’t approve of. Kate Middleton and Prince William stepped out in 2011 to attend the Calgary Stampede and undeniably dressed the part from head to toe. Kate’s look consisted of a white western cowboy hat, an oversized bull belt and a pair of traditional cowboy boots. Although we can understand that this look was all in good fun to go with the theme of the event, we’re not convinced that the Queen would approve of these casual, commoner-level outfits. 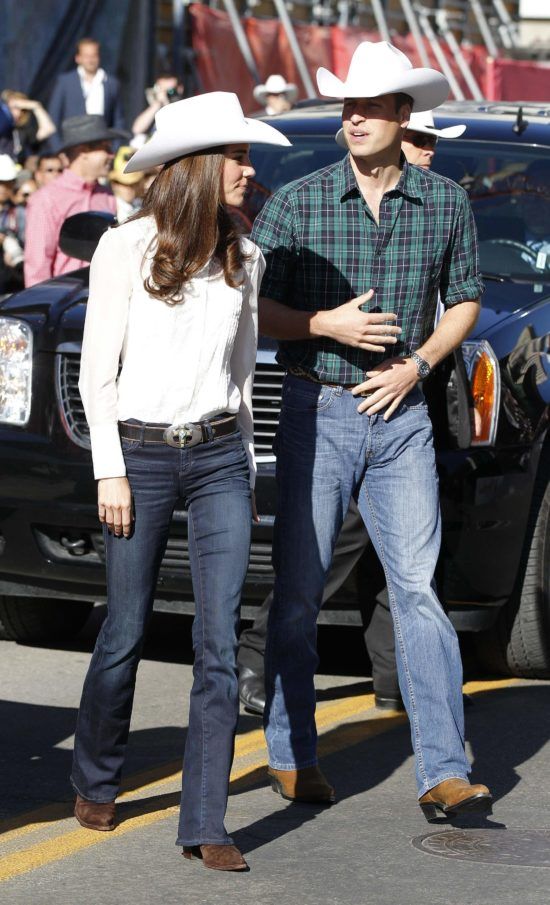 Of all Kate Middleton’s looks, the one style that the Queen has adamantly voiced her disapproval of is wedge-style heels! “The Queen isn’t a fan of wedged shoes,” a source told Vanity Fair. “She really doesn’t like them and it’s well known among the women in the family.” Kate seemed to ignore this rule for a while during her early days as a royal, but we can’t help but notice that nowadays she’s seemingly retired the platform shoe trend and traded it in for modest 3-inch stilettos. 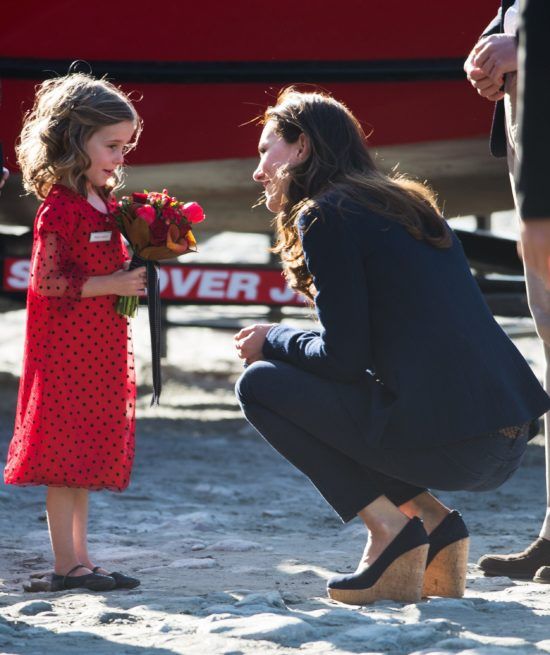 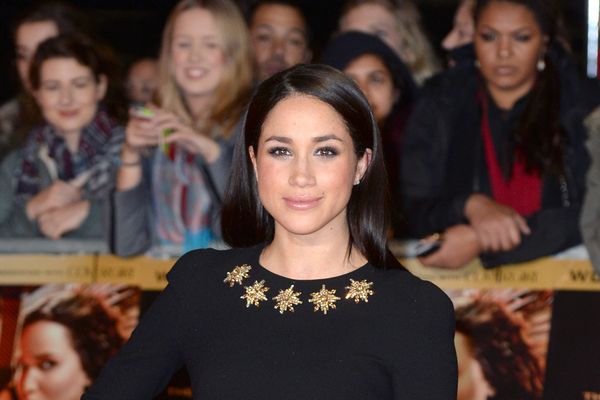