With the 2018 Hollywood awards show season officially complete, it’s now that time of year to reflect on the best and the worst looks of the season. There were definitely more than a handful of remarkable fashion moments that left us completely in awe and with our jaws dropped, but for some, unfortunately, it wasn’t for the right reasons. Follow along for 16 of the biggest red carpet fails of 2018 awards show season:

Pink is one of the few stars who refuses to be labeled when it comes to her personal style. For one awards show, she’ll step out wearing a feminine ruffled gown and the next she’ll be in a power suit. Her look from the 2018 Grammys, however definitely left us quite confused. The voluminous garment featured clashing feathers in shades of magenta, indigo, and black and the entire look was topped with a chunky black belt. We appreciate the rocker edge of this look, but it definitely was not the most flattering in terms of color and shape.

Emily Blunt shocked us when she stepped out wearing this red carpet fail at the 2018 Oscars! Although the pastel shade of powder blue is lovely on Blunt’s fair complexion, the cut of the dress was just completely unflattering. The ruffles around the neck came across matronly rather than the demure look we assume she was trying to achieve. It’s safe to say this Oscar’s look was a definite red carpet fail!

Sheer paneling and floral applique were a huge trend during the 2018 red carpet season, but unfortunately, Barbara Meier’s look was a prime example of the trend gone wrong. Her Golden Globes look featured volume in all the wrong places and multicolor layers with fringe sporadically throughout. The look was quite the hot mess and although we love the color palette on Meier, the shape and detailing just did not cut it.

Andra Day definitely made quite a few jaws drop when she appeared at the 2018 Oscars in this red carpet fail. The pastel number featured voluminous tiers, ruffles, and a chaotic floral print. The combination of all these features looked messy, overwhelming and overall quite questionable. The Zac Posen number was definitely dramatic, but Andra Day’s decision to pose on the red carpet while lying on the floor made it come across as a joke more than anything.

Blanca Blanco has built an unfortunate reputation for showing too much skin on the red carpet, and she struck again at the 2018 Oscars. Her look consisted of a gaping, plunging neckline and a strange color combination of white and red that didn’t seem to quite fit together. Blanca is such a beauty that we simply wish she could learn the art of leaving at least a little to the imagination when it comes to fashion.

Jenny McCarthy undeniably shocked everyone when she appeared at the 2018 Grammys with a completely new hair color! Rather than the typical subtle shift in shades that many stars opt for, McCarthy completely evolved her look and stepped out with striking blue tresses. We love a statement look on the red carpet, but because the eccentric hair color was so bold we wish she had skipped on the mesh gloves, tinted sunglasses, and heavy sequins.

Sarah Jessica Parker has a huge reputation to live up to when it comes to fashion, but unfortunately, her 2018 Golden Globes look definitely fell short. The red carpet fail consisted of a voluminous skirt that hit her at an awkward ankle length and made her look quite frumpy. The corset-style bodice was flattering, but not in combination with the elbow-length sleeves.

Maya Rudolph definitely left quite a few Oscar-goers feeling quite puzzled when she stepped out in this full-coverage red frock. It goes without saying that this garment drowned her petite frame and was highly unflattering. The rich red color is definitely complementary to her olive skin tone, but the high-turtleneck style neckline and oversized long sleeves did not do her justice.

Allison Williams had quite a few worst-dressed fashion moments this red carpet season, but her lace look from the 2018 Critics’ Choice awards was definitely one of her most disappointing. The lace felt outdated and matronly and the sheer panels bared skin in seemingly awkward places. The look was overall quite confusing, but luckily Williams saved her fashion reputation when she stepped out in a stunning champagne number at the Oscars.

Emma Stone is typically one of the most well-dressed celebrities at any awards show, yet for the 2018 Oscars she seemed to take too big of a fashion risk that critics were quite divided on. The look was comprised of a silk red blazer which featured a pink sash that was tied in a bow around her waist. The combination of red and pink was a huge runway trend this year, but we would have much preferred to see this color combo as a street style look than on the red carpet. In our opinion, it’s always a safer bet to opt for something a little more timeless than trendy when it comes to big awards shows.

Surprisingly Nicole Kidman had her fair share of fashion misses this 2018 awards season! The eternally elegant star has proved to be one of the most well-dressed women in Hollywood over the years, yet many of her 2018 awards show looks fell flat or were simply underwhelming. Her look at the Critics’ Choice awards was definitely the most concerning from the bright magenta color, sheer paneling, ruffles and tacky bedazzlement.

Brunette beauty Salma Hayek typically lands on every best-dressed list when it comes to red carpet season, but we have to admit that this look from the 2018 Oscars had quite the opposite effect. The typically polished Hayek stepped onto the red carpet wearing a purple sparkly number with unflattering tiers along the skirt and strange neckline embellishment.

Angelina Jolie definitely stood out amid the 2018 Golden Globes fashion blackout with this feathered look, but unfortunately, we’re not sure it was for the right reasons! Jolie has always favored black when it comes to fashion, so this particular color didn’t come as much of a shock, the sleeves, however, were a totally different story. The feathered embellishment along the wrists of the gown seemed quite random and didn’t flow with the rest of the soft, sheer garment.

American musician St. Vincent definitely had one of the most obscure fashion moments of the 2018 red carpet season at the Oscars! Her look consisted of an uber-mini hemline that featured a strange V-shape in the center, but things got even more bizarre with the voluminous asymmetrical sleeve. We love statement looks on the red carpet, but this one, in particular, was an undeniable fashion fail on her part.

Allison Janney stunned at the Critics’ Choice Awards when she stepped out in a shimmering cobalt number, which is why our expectations were high for the awards show red carpets to follow. Unfortunately, Janney left us quite disappointed at the BAFTA’s where she donned this completely strange silver and black number. The metallic look was definitely quite avant-garde and risky, but it lacked the simplistic elegance and sophistication of a winning red carpet fashion moment.

Of all the red carpet fails of the 2018 awards season, Kate Hudson’s frothy polka dot number from the SAG awards definitely steals the show. Fashion critics were utterly bewildered by the statement fashion moment and questioned the combination of ruffles, lace, tiers and heart-shaped polka dots that were featured on Hudson’s dress. This blonde beauty is a typical red carpet all-star, but this particular red carpet look will definitely go down in history as one of the biggest fashion fails. 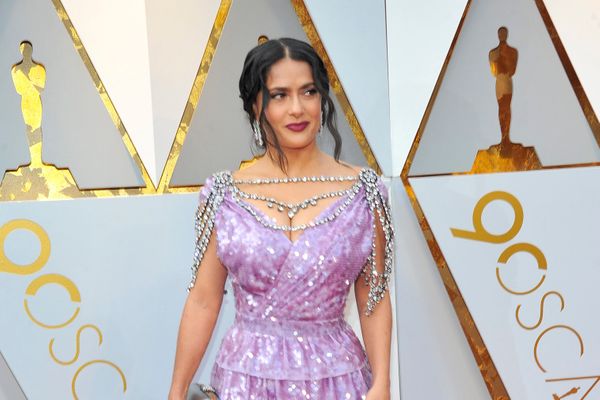