The Royal family loves to make a statement with their fashion, and often this means incorporating hidden messages into their outfits. Whether it be certain colors, patterns or details, follow along for 20 noteworthy Royal outfits you didn’t know had hidden meanings:

When Kate stepped out to present her firstborn son Prince George to the world, the world’s immediate reaction was to draw comparisons between what Kate wore to what Princess Diana wore to present William. The resemblance between the two outfits is definitely intentional with the light cool-tone dress and polka dot detailing!

When Wallis Simpson married Edward VIII, she opted to stray from tradition and wore a pale blue silk dress rather than a traditional pure white gown. The color was eventually coined “Wallis blue” because the fabric was allegedly designed and dyed to perfectly match Wally’s eyes.

Queen Elizabeth definitely wore one of the most memorable royal wedding dresses of all time and the number certainly didn’t lack on detail and hidden messages. Since the wedding came after WWII, the idea was to send a message of national renewal and hope for the future with the symbols on Elizabeth’s wedding dress. The gown was embroidered with garlands of spring flowers, inspired by the Botticelli painting “Allegory of Spring.”

Prince George is notorious for always wearing short shorts and, surprisingly, there’s actually a hidden meaning behind it! There’s a tradition among the upper class that aristocrats and royals must dress young boys in shorts to show status. A pair of full pant trousers on a young boy is considered to be middle class and “suburban.” Although times are slowly changing, this overly traditional rule still seems to be in full force when it comes to Prince George.

Sarah Ferguson’s wedding dress was riddled with hidden detail and meanings! The gown itself was beaded with bees and thistles, representing the bride’s coat of arms. Anchors and waves were also embroidered on her veil to represent her husband Andrew’s position as an officer in the Royal Navy.

Meghan Markle was quite intentional with the flowers she chose to include in her bridal flowers. As a thoughtful tribute to the late Princess Diana, Meghan included forget-me-knots which were her favorite flower in the bouquet.

Princess Eugenie wanted her wedding dress to make a statement, and it certainly did! She opted for a low-back cut that showed off a large scar she has down her back. The scar was an insecurity of hers for years, which is why the dress was intended to make a statement to young girls about embracing your uniqueness.

Every outfit worn by the Royal Family is strategically selected while they’re on international tours. Their wardrobes are intended to reflect the country in which they are visiting as a sign of honor. This is often done by wearing local designers from that country or colors and symbols that represent the culture. For example, if you look carefully at this photo of the Royal family arriving in Poland, they are all wearing red and white which are the colors of the Polish flag.

Meghan Markle has proved just how thoughtful she is during her royal reign! She’s a loving wife to Prince Harry and has done many public gestures to show she’s thinking of his late mother, Princess Diana. She even inherited many of her beloved jewelry pieces, such as these butterfly earrings, which she’s worn on multiple occasions.

While the Royal Family is known for opting for a wardrobe in colors that honor the country they are visiting, they also do the same for some of the big symbols associated with those countries as well. This eagle dress is the perfect example of this Royal fashion practice. The Duchess of Cambridge wore this dress in 2017 while visiting Germany, who celebrates the eagle as their national bird.

Before she was a royal, Lady Diana came from a highly-acclaimed family of her own as a Spencer. Rather than wearing a crown inherited from the Royal Family on her wedding day, she instead decided to make a statement and wear one from her own family. The tiara was originally given to her grandmother in 1919, with additional pieces added in the 1930s. Both of Diana’s sisters wore the tiara on their own wedding days which made it a tradition.

If you thought you recognized this cardigan worn by Princess Charlotte, you’d be correct! She isn’t the first royal to wear it and it’s actually a hand-me-down from big brother, Prince George. He was photographed wearing it previously in an official portrait to mark the Queen’s 90th birthday. Clearly, the cardigan is of importance to Duchess Kate if she’s kept and cherished it throughout the years for her children!

When Kate stepped out at the hospital to present her third child Prince Louis to the world, we couldn’t help but draw comparisons between her red dress and one that Princess Diana wore to present Prince Harry to the world. Kate seemed to elevate Diana’s look but the details of the bright shade of crimson and white collar remained the same.

Princess Beatrice looked so dreamy in this tulle floral dress she wore to the Chelsea Flower Show in 2018. One subtle hidden detail about her outfit that may have gone unnoticed was the text on her black handbag which read “Be cool Be nice” which is a slogan associated with an anti-bullying campaign.

Crowds gasped when Princess Diana stepped out wearing this slinky off-the-shoulder gown on the evening that Prince Charles publically confessed to his affair with Camilla Bowles. The figure-hugging mini number was coined the “revenge dress” and instantly became an icon and a turning point in the way Princess Diana was perceived. Diana was rumored to be initially quite hesitant about the daring Christina Stambolian garment and kept it on hold for three years until the particularly dramatic evening. The sexy black dress showed a new, confident Diana that the public was proud to embrace.

Queen Elizabeth is almost always seen wearing white gloves for public appearances and events and they’ve become an iconic part of her signature look. Not only do they exude an air of royalty, but the white gloves also help to protect her hands since she spends much of her time greeting and shaking hands with others.

As one of the most photographed women in the world, Diana definitely knew how to avoid photographers capturing unflattering angles of her. One of her tricks was to use a clutch when she was getting out of a car to hide her cleavage. She owned small satin clutches in nearly every color that perfectly matched her dresses, which she eventually dubbed her “cleavage bags.”

Kate’s choice of dress in 2018 for a remembrance ceremony for Lady Diana had an interesting hidden meaning. The service marked the 20th anniversary of Diana’s passing, so to honor her late mother-in-law Kate opted for a poppy print which in the UK is a symbol of remembrance.

It was expected that Prince Harry was going to marry wearing a morning suit; however, this was not the case! He instead opted for a uniform with his ribbons on it rather than an aiguillette. The ribbons are given out for the work Harry has actually done, instead of achievements that he may have been given out of honor as a royal.

Meghan Markle wanted everyone to be included on her wedding day, which is why she opted for a special veil. The 16-foot train was embroidered with all 53 signature flowers from the countries of the British Commonwealth. 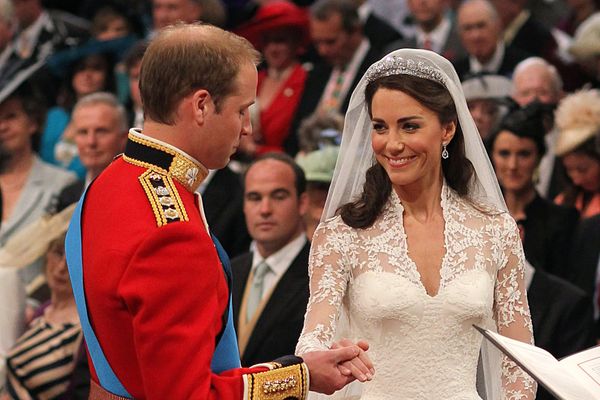 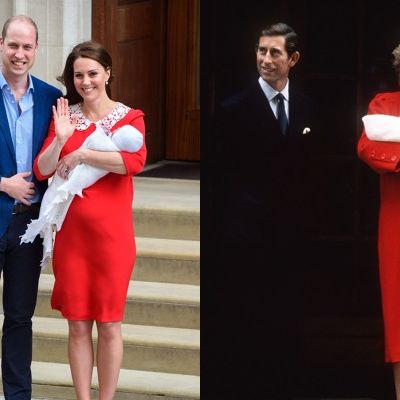