American Music Awards’ 10 Most Shocking Looks Of All Time

The American Music Awards is one of the year’s most anticipated fashion events of the year! Much of this anticipation comes from ogling viewers awaiting another 2001 Justin Timberlake and Britney Spears denim on denim fiasco, and often they are not disappointed with many stars opting for outfits seemingly just as outrageous! Whether it was too revealing, awkwardly shaped or downright unflattering, follow along for 10 of the most shocking American Music Awards looks of all time:

Although Avril Lavigne was never known for her fashion sense, this look from the 2007 American Music Awards was definitely one of her worst. 2007 was a period of transition for Avril Lavigne’s style and this moment shocked viewers as she ditched her typical tomboy style for more of a girly look. Unfortunately, the ruching and awkward length of the bronze Dolce & Gabbana number was not especially flattering and landed her on quite a few worst dressed lists at the time.

Jennifer Lopez has become known on the red carpet for her revealing yet glamorous red carpet dresses! Unfortunately her 2014 American Music Awards barely-there dress was definitely revealing, but not so much glamorous. The wrap-style dress bared her entire midriff and the ruching around her hips seemed highly unflattering. We would have much preferred to see J.Lo in something floor-skimming with a bit more class!

Kelly Osbourne’s 2013 AMA look was a definite fashion disaster! The metallic grey dress did not flatter her figure and the flouncy skirt cut her legs at an awkward length by reaching only to her ankles rather than to the floor. Osbourne found herself on quite a few worst-dressed lists following the event due to this shocking look and even acknowledged the fashion miss herself by tweeting, “:( my dress did not photograph anywhere near as good as it looked in real life!”

In 2008 Rihanna rocked an interesting Zac Posen mini dress that definitely was not one of her best looks. The asymmetrical hemline did not flatter her figure whatsoever and the look seemed overly girly for Rihanna’s edgy and bold sense of style. She even paired the pastel yellow dress with princess-style gloves and classic peep-toe heels that seemed excessively frilly and conventional for Rihanna.

In 2015, Gwen Stefani stepped out at the AMA’s wearing a disappointing black number designed by Yousef Al-Jasmi. Gwen Stefani typically stuns on the red carpet with her edgy and unique designs, but this bat-like look was a definite fashion miss. The voluminous shape of the top of the dress overwhelmed her and made her figure appear boxy and definitely did not mix well with the completely sheer skirt.

Scream Queens star Keke Palmer made a bold red carpet move that shocked everyone at the 2016 American Music Awards! The actress rocked a sheer crop top and mini skirt combo and wore rose-tinted sunglasses and a furry pink outerwear piece. She topped the look with a matching choker-style necklace, silver strappy heels, and metallic eyeshadow. The look was undeniably fierce, but we’re still not completely convinced the overly-revealing style was appropriate for an awards show.

Heidi Klum is one star we can constantly rely on to step onto the red carpet with a jaw-dropping and perfectly crafted outfit. Unfortunately, at the 2016 AMA’s our jaws dropped for a whole other reason! The star rocked a head to toe metallic jumpsuit that featured balloon sleeves and a bow detail on the neckline. The look was overly modest and a huge disappointment when considering Heidi Klum’s reputation for fashion-forward and award-winning style.

Although country superstar Carrie Underwood had multiple outfit changes throughout the night of the 2012 AMA’s, this look, in particular, stood out as one of her most questionable choices. The electric blue dress was designed by Sarli Couture and featured ruffle detailing along the front as well as a wide belt that cinched in her waist. The entire look seemed overwhelming and was distracting rather than complimentary on the petite and gorgeous singer.

By now fans have come to expect that Nicki Minaj will show up on the red carpet in something outrageous, but by the look on her face, even Minaj herself was shocked with this particular 2011 AMA look! The top of the dress featured a black lace bodice, which in isolation, isn’t overly terrible. The skirt, however, featured a bright green color and was covered in ruching which did not pair well with the lace. She paired the look with a thick choker and a bubblegum pink wig which made the look even more distracting.

Kesha stepped out in one of the most obscure dresses to date at the 2010 American Music Awards! The dress was crafted from old VHS tapes from her childhood. “When Nashville flooded earlier this year, all my favorite VHS tapes from when I was little — Wayne’s World, The Lost Boys — were in my basement and got destroyed,” the pop star explained at the time. “I was watching Lost Boys recently and thought, ‘I should wear the insides of this tape as my dress at the AMAs.” To add even more confusion to the odd dress made of VHS tapes, Kesha styled her hair in a super tall mohawk and placed metallic studs on her eyebrows. 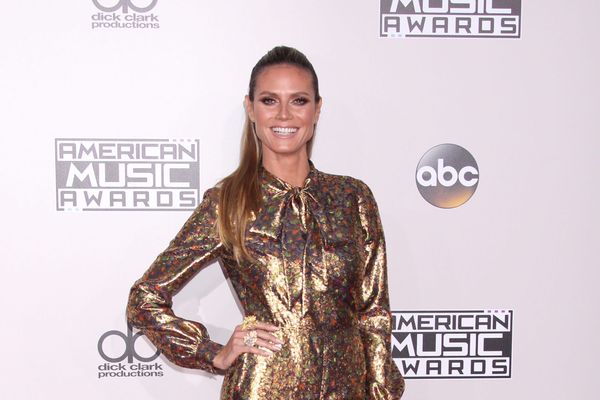