Last night at the American Music Awards, celebrities came out in their finest to celebrate the latest and greatest in contemporary music. While there were some celebrities who definitely dressed to impress, there were a number of others who totally missed the mark. Here are last night’s 7 worst dressed stars:

The Vampire Diaries star Kat Graham donned this sheer, disco era-inspired dress by a LaBourjoisie, which featured a plunging neckline. Although it appears that she was going for glam, her outfit was definitely one of the worsts looks of the night, mostly because she showed way too much skin.

Tariji P. Henson wore a short, white Celine jacket shirtdress with the top open, which revealed a black lace bra underneath. The dress itself was just not up to par. It was so baggy and looked as though it was made for a man three times her size. We don’t know why she chose this particular look because, to us, it’s such an obvious fail.

Bella Thorne was obviously in the mood to show some skin at the AMAs, which is probably why she wore this Anthony Franco jacket with Josie Natori pants with nothing but a matching black bra underneath. While the outfit was definitely questionable, the hair was the worst part. Neon hair is never a good idea – it doesn’t matter how attractive you are, Bella!

Scream Queens’ Keke Palmer wore a grey, sheer, mesh two-piece dress by Natalia Fedner that left little to the imagination. While she did have a pink fur coat hanging off of her arms when she walked the red carpet, we get the impression it was more of an accessory, like pink sunglasses she wore. Personally, we think she wanted everyone to get a good look at her body – and we did! Unfortunately of Keke, we’re not judging her based on her body – we’re judging her based on her outfit, which was just a little too tacky.

Olivia Munn’s ensemble at the American Music Awards left a lot to be desired. She rocked a floral, Reem Acra babydoll dress that was way too short and showed way too much cleavage. We don’t know what she was thinking. The dress doesn’t even look like it is her size, which is a major fashion faux pas!

As the co-host of the AMAs, one would think that Gig Hadid would have found a better dress than this white, semi-sheer lace number by Roberto Cavalli to walk the red carpet in. It’s obvious that she was going for high fashion with this dress, but she totally missed the mark. The dress looks like a lace tablecloth that was fashioned into a dress at the last minute. Even with that pretty face, she couldn’t make this dress a success.

Heidi Klum is ridiculously beautiful but, as of late, she seems to have lost her style mojo. This became abundantly clear last night when she showed up at the AMAs wearing this metallic Wolk Morais jumpsuit, which featured a pussy bow. While one would think that someone as gorgeous as Heidi could look good in anything, this outfit proves that theory wrong. 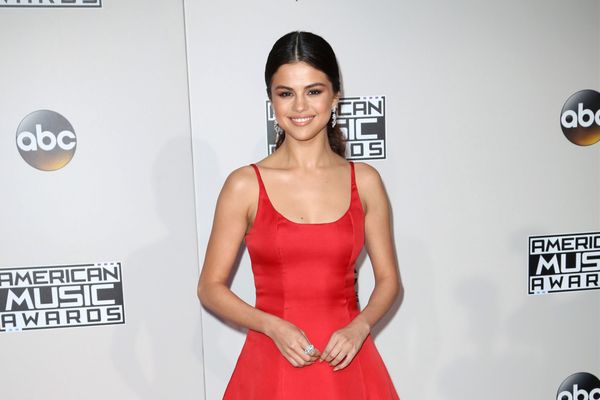