The annual American Music Awards always feature a few wildcard fashion moments that leave us completely speechless! 2017 was no different and although there were quite a few best-dressed looks, we can’t overlook some of the seriously questionable fashion moments we witnessed last night. Whether it was poofy and over the top, painfully too casual or just simply unflattering, follow along for seven of the worst-dressed stars from last night’s AMAs:

Yara Shahidi has definitely proved to be one of the biggest upcoming fashionistas in Hollywood, but this particular look she wore for the American Music Awards left us quite disappointed. In comparison to the extravagant ballgowns and chic dresses that others were wearing, Shahidi seemed somewhat underdressed and casual. The star wore embroidered shorts, a black top and an olive trench paired with knee-high socks that lacked the glamour we were hoping for and seemed somewhat frumpy. 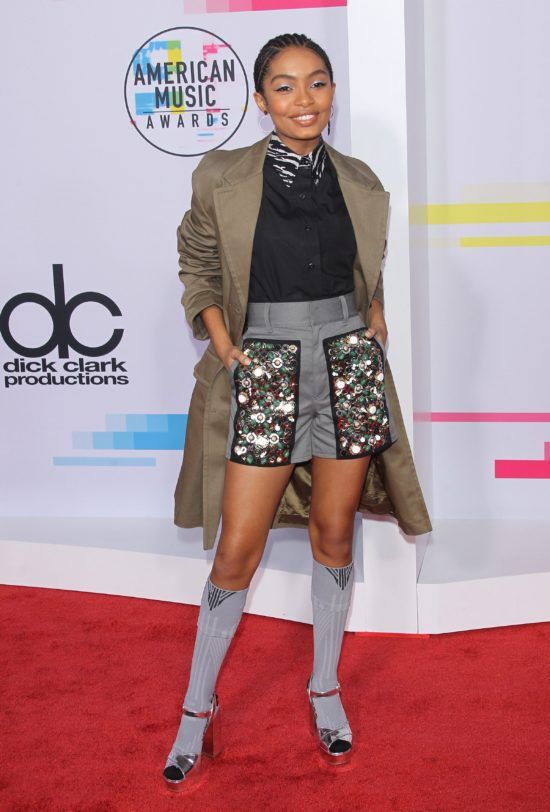 Kelly Clarkson’s velvet gown definitely did not leave a lasting impression on the American Music Awards red carpet this year. The look definitely had the signature rocker Kelly Clarkson edge, but the shape of it was unflattering. We love glitter detailing, but this particular gold-emphasized silhouette definitely added volume to her figure in the worst way. 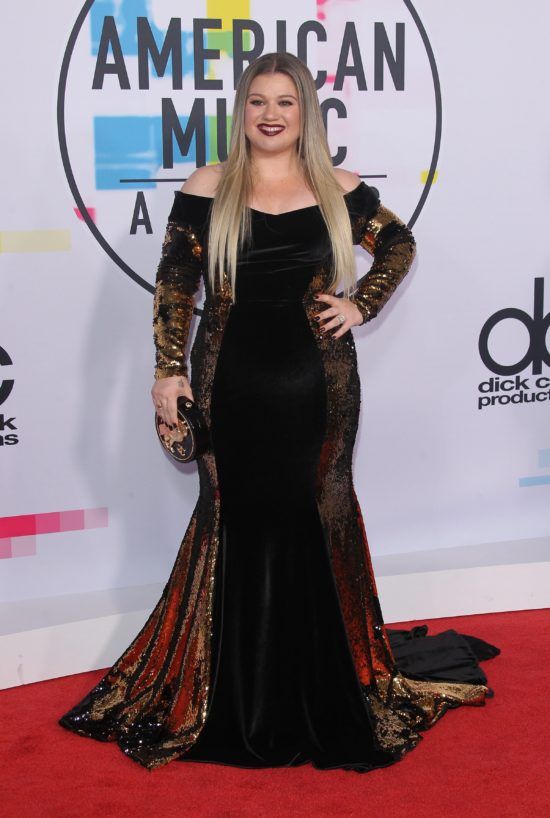 The Vampire Diaries star Kat Graham wore a two-piece outfit on the red carpet that was not completely convincing. The white blouse featured a floral shoulder detailing and a soft pink print which she paired with a ruffled high-low skirt and black pumps. As much as we love both these pieces individually, they both make such a statement that they don’t seem to work together well. 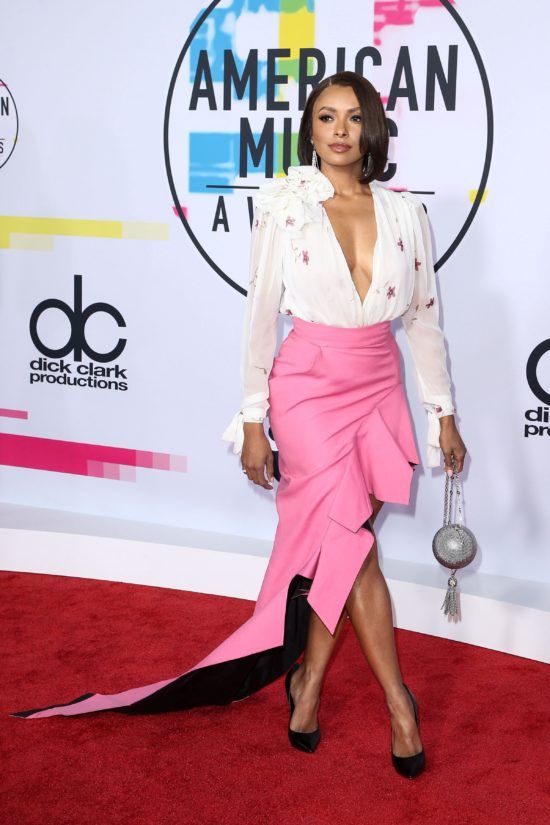 YouTube personality Lilly Singh wore a fluorescent fuschia dress on the night of the American Music Awards that definitely turned heads. The dress featured extravagant floral detailing along the shoulder and hip and an asymmetrical neck and hemline. Although we appreciate risk on the red carpet, this particular dress seemed overwhelming when considering how bold the color is in combination with the embellishment. 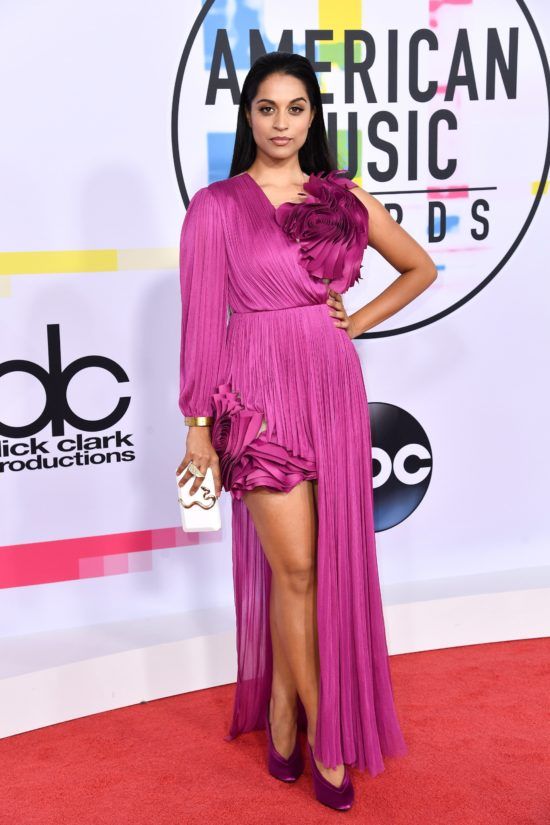 Riverdale star and brunette beauty Camila Mendes is absolutely stunning and could seemingly do no wrong on the red carpet, which is why her AMA dress left us especially disappointed. The dress was a pale shade of yellow and pink that seemed to wash out her naturally olive complexion. The cut was simple, empire-waisted and definitely not a memorable fashion moment by any means. 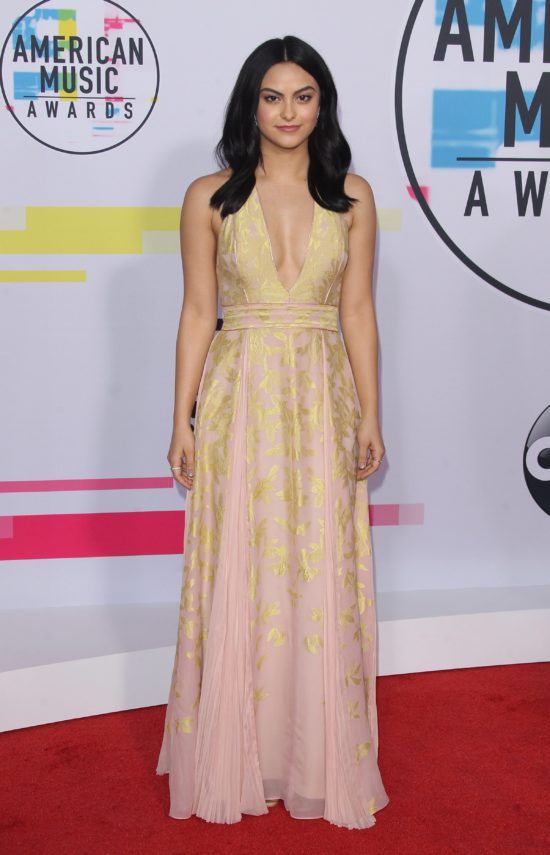 Ashlee Simpson wore an ultra sparkly gown on the American Music Awards red carpet and the look definitely had a lot going on at once. Not only did the dress have a high neckline and long sleeves, but it also incorporated a rainbow of sequins ranging from pink, black, brown and gold. There seemed to be too much fabric and we would have much preferred a full-sequin dress like this if it was a minidress or sleeveless to avoid looking overwhelming. 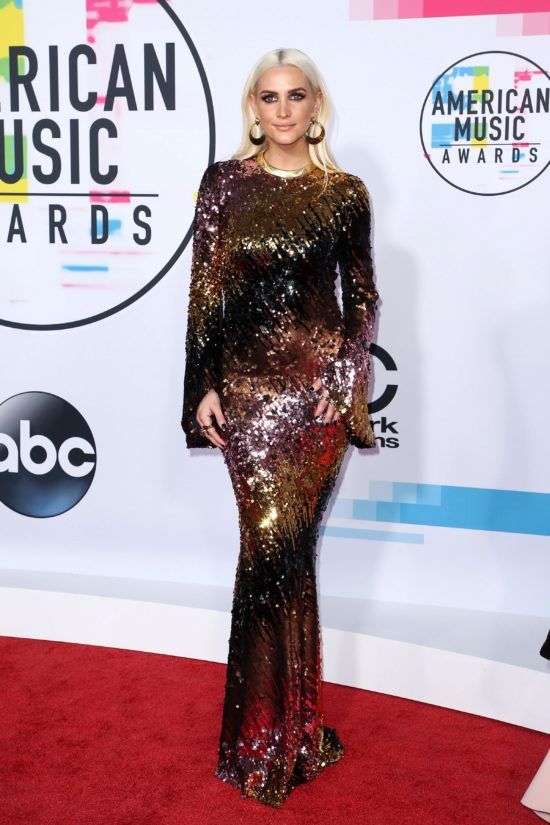 Popstar Bebe Rexha was shameless with her American Music Awards look this year and definitely did not hold back. Her dress featured a black sparkly overlay which covered a nude slip and was far from modest when it came to showing her figure. As much as we appreciate a risk or two, this dress just seemed a little tasteless and overly revealing. 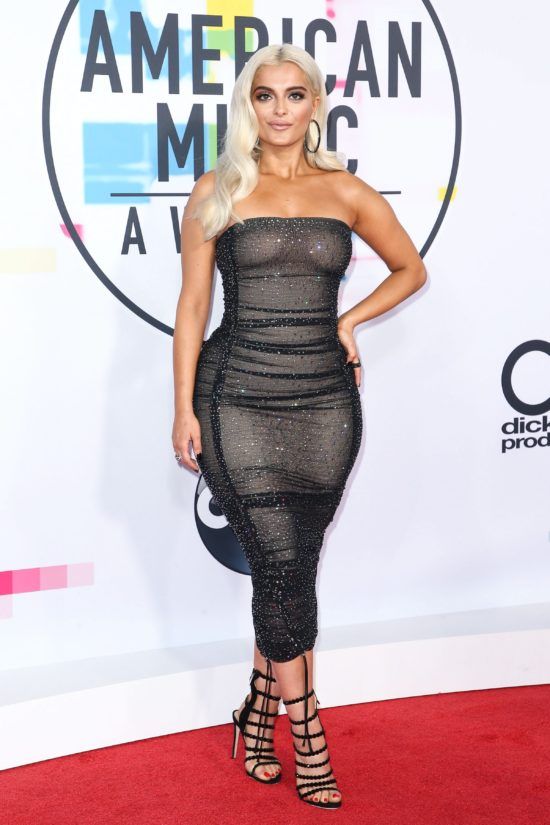 Lili Reinhart plays the peppy and lively Betty on Riverdale, which is why this dark and a demure black number came as quite the surprise at this year’s American Music Awards. The look featured a completely modest neckline that featured an asymmetrical shoulder sleeve and a sheer neckline with floral embroidery. Ultimately this look just seemed too mature and simple for an up and coming star and we were expecting much more of a youthful and fun look. 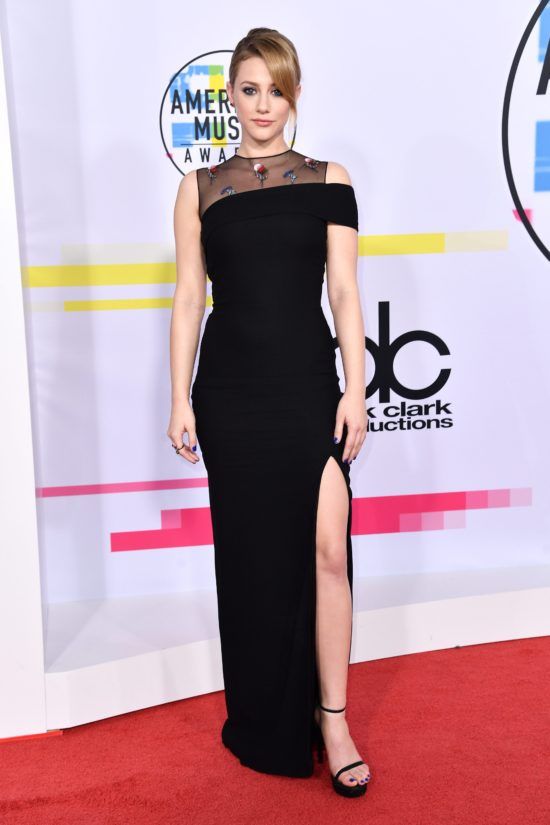 Pink definitely marches to the beat of her own drum, especially when it comes to fashion! Although we appreciate her bold moves and tendencies to opt for something risky, this particular look was unfortunately not one of her best. The faded red color blended in with the color of the red carpet and totally clashed with the pink shade of her hair. The cupcake-style dress featured one too many tiers to be flattering and had a cobalt blue floral print in seemingly random spots along the dress. 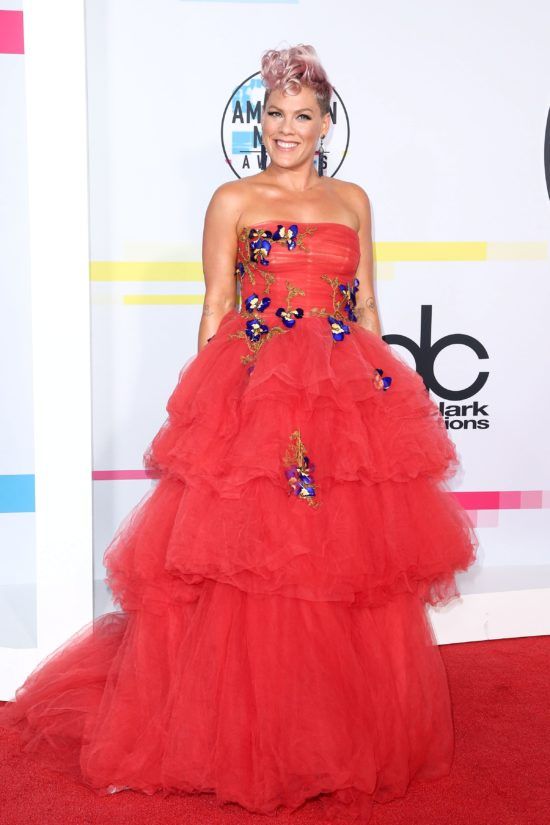 Erika Jayne’s attempt at knee-high boots was unfortunately quite the fail last night at the AMA’s! She opted for a black blazer dress that on its own actually wasn’t too bad and quite sophisticated and chic. The boots, however, slouched in all the wrong places, looked unflattering and were a bold shade of magenta that seemed tacky and a little over the top. Luckily, her blonde tresses fell in gorgeous waves over the shoulder and her makeup was on point to save the day. 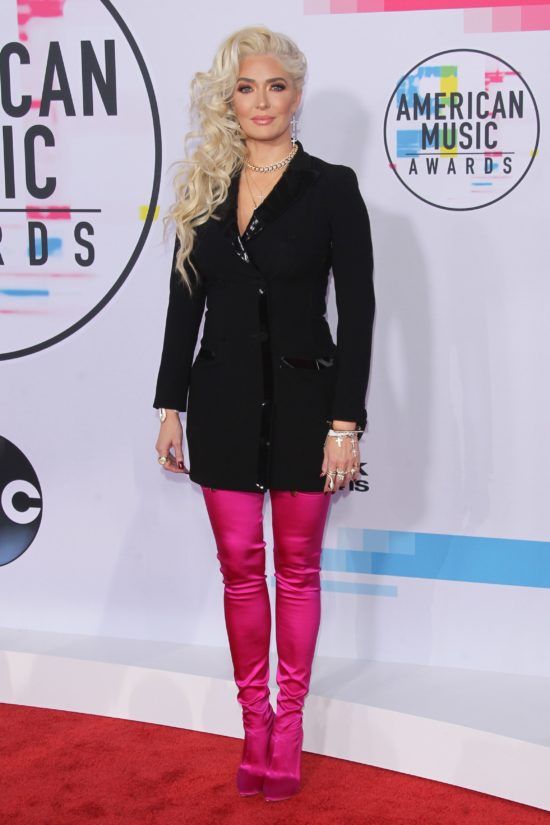 Julia Michaels stepped out in a dress that was bold and surprisingly quite similar to Pink’s foofy number! The dress had cupcake-style tiers trailing down the dress and a super strange cutout and tye detailing in the center of the dress that we can’t seem to wrap our heads around. The neckline was poofy and unflattering and definitely added to the overall bizarre look of this strange dress. 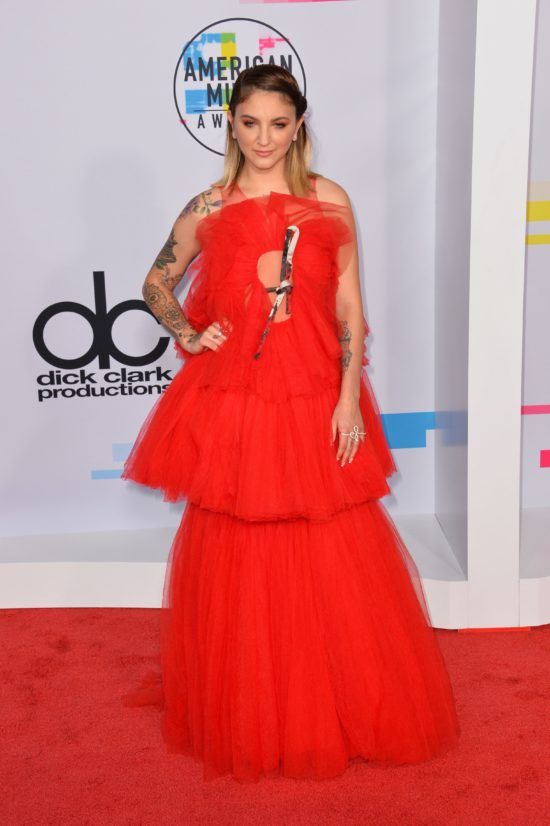 Kehlani stepped out in quite the interesting black sheer number last night at the AMAs! The risque floor-length gown bared quite a bit of skin and featured bizarre silver-colored tassels all over the entire dress that we just don’t understand. We would have much preferred to see her do lace or tassels in a more subtle or polished way! The dress was simply confusing and unflattering. 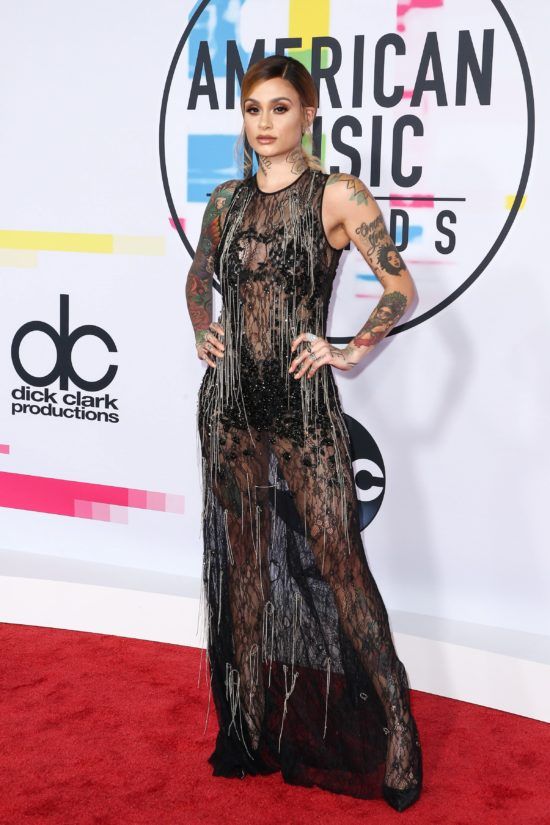 There is a time and place for plaid and the American Music Awards red carpet is definitely not it! Sabrina Carpenter stepped out wearing a plaid trenchcoat as a dress and this look was undoubtedly too casual for the event. The plaid overcoat had no glam factor and seemed more appropriate as a weekend street style piece than worn as a dress at the AMAs! She paired the look with nude over the knee boots which made this look appear even more casual. 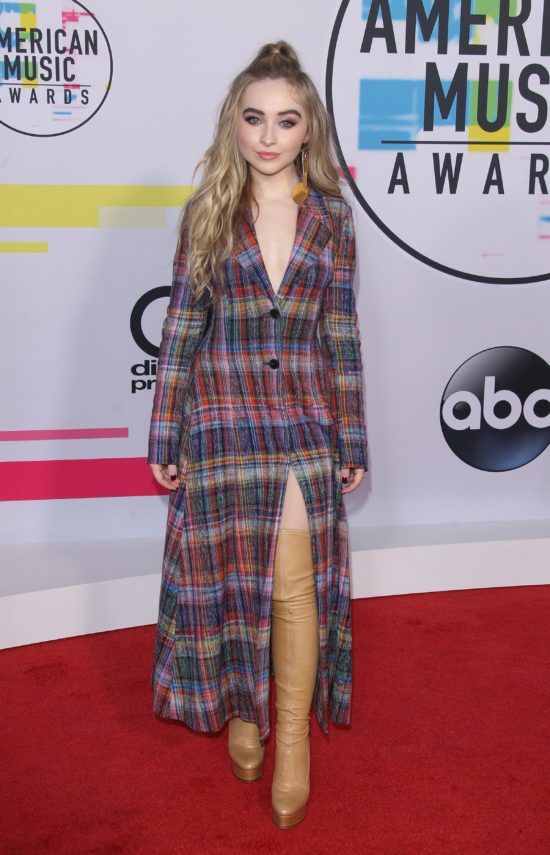 Diana Ross definitely had no shame on the red carpet last night when she stepped out wearing this extravagant headpiece and draped cape look. The music icon definitely looked a little too theatrical for our liking and the whole look seemed more similar to a costume than a respectable red carpet look. The black gown featured an oversized belt detailing and was made of a strange crinkled material that was definitely not sleek or flattering in any way. 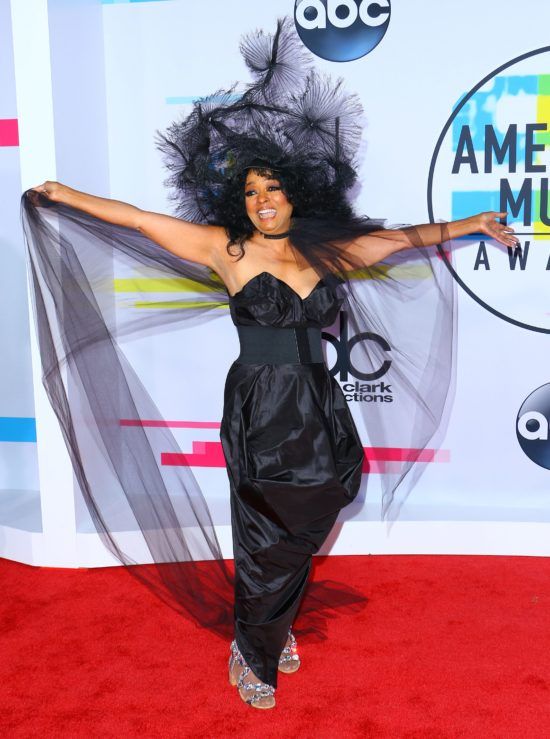 Alessia Cara takes the cake for worst dressed at the 2017 American Music Awards in our books! The star stepped out wearing a super casual mesh top paired with a strange pair of joggers that seemed more appropriate for lounging at home or running errands than a highly publicized red carpet look. To make matters worse, Cara paired the casual black look with an even more casual pair of black combat boots that featured stark white laces! Shoes play a huge factor in dressing up or dressing down a look and these chunky boots definitely did not help her cause last night. 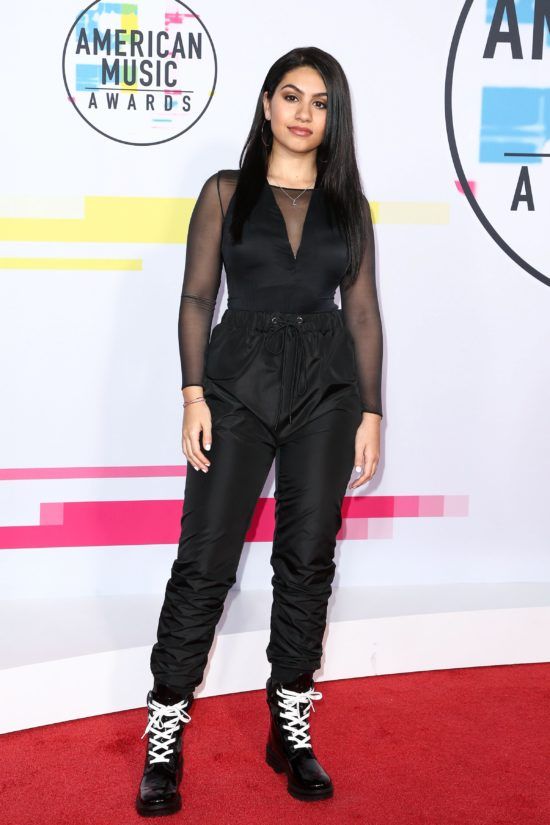 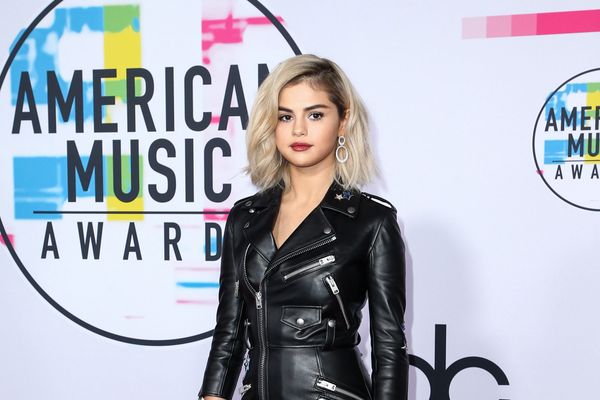