Cameron Diaz went from being a model to one of the most in-demand actresses in Hollywood. She is incredibly talented – and critically acclaimed – with one of the hottest bodies in the business. She also has an impeccable sense of style. Diaz has been hitting the red carpet for almost 20 years and, even though she didn’t start out as the most fashionable star, she has certainly become just that. Check out Cameron Diaz’s fashion evolution!

Cameron Diaz wore a little white mini-dress to the “Charlie’s Angels: Full Throttle” premiere. She looked tanned and toned and was also barefoot! Turns out the actress broke a heel on the red carpet and then decided to go without shoes. Even though the film received mixed reviews from critics, which included a Worst Actress Razzie for Diaz, the ensemble she wore to the premiere has gone down in history as one of the cutest outfits ever.

The “Gangs of New York” star wore this metallic Zac Posen mini-dress to the premiere of “The Holiday.” Unfortunately, the film didn’t receive rave reviews and neither did Diaz. Carina Chocano, who wrote a review for the Los Angeles Times, praised Winslet and Law’s performances, but said that she felt that Diaz “strikes the off-note, but then you tend to think it’s not her fault.” Our review of the dress is kind of similar – definitely not one of our fav looks.

Cameron went for a sultry look at that 2007 Golden Globe Awards. She debuted her new dark hair and wore a gorgeous floor-sweeping tulle gown designed by Valentino. Unfortunately, the dress wasn’t a total success. Critics seemed divided. While some loved it, others hated it. At Prince’s Golden Globes afterparty, Diaz ended up running into her ex Justin Timberlake with Jessica Biel. Sources say that Diaz ended up getting into a heated exchange with her ex before they went their separate ways.

Diaz looked ravishing in this fuchsia Christian Dior by John Galliano gown at the 2007 Met Gala. She completed the fab look with a bright turquoise necklace and earrings by Fred Leighton. The Golden Globe nominated actress landed on a number on best-dressed lists for this lovely look. Her fashion has certainly evolved since her early days in film. She is taking more risks, but she clearly knows what she is doing.

The “Charlie’s Angels” star wore this strapless pale pink Christian Dior by John Galliano bustier gown with Bulgari jewels and a Roger Vivier clutch to the 80th Annual Academy Awards. Reviews on this gown were mixed. While some loved the look, others would have preferred if she wore the same dress but in a more vibrant color. Comments on the color aside, the details on this dress are exquisitely beautiful, which makes the look a winner in our eyes.

The “Something About Mary” star looked angelic in a white embroidered Oscar de la Renta dress with striking red accessories, including a belt from the Oscar de la Renta Resort 2010 collection, when she received a star on the Hollywood Walk of Fame. At the ceremony, she thanked her parents. “It was what has given me the strength and courage to live this extraordinary life and it is what powers the light that burns inside of me, bright enough for me to be honored today with this star on the Walk of Fame.”

The “Shrek” star looked cute and casual at the Nickelodeon Kid’s Choice Awards in a polka dot Michael Kors top with a pair of distressed Seven for All Mankind jeans and DSquared2’s open toe pumps. Those jeans certainly show that this actress has some of the best legs in the business! At the event, Diaz presented her friend Leonardo DiCaprio with the first-ever Big Green Help Award for his contribution to environmental issues.

Cameron Diaz promoted her new movie “Bad Teacher” at the CinemaCon Convention where she received a Female Star of the Year Award. She opted for a more sophisticated look by wearing a Roland Mouret dress, an Elizabeth and James jacket, Lanvin shoes and a gold bangle by Gemma Redux. Even though working on the film gave Diaz an opportunity to work with her ex Justin Timberlake, critics were less than impressed with “Bad Teacher.”

The “In Her Shoes” star looked fabulous in a Phillip Lim jumpsuit, Lanvin shoes, an Alexis Bittar necklace and ring, and Anita Ko earrings at the 2011 MTV Movie Awards. During the event, Diaz and her co-star from “Bad Teacher” Jason Segel presented the award for Best Line from a Movie while her ex Justin Timberlake and his rumored lover Mila Kunis presented the award for Best Male Performance. While Diaz kept it classy, Timberlake and Kunis groped each other on stage.

Cameron Diaz made a questionable choice at the “What To Expect When You’re Expecting” premiere when she wore this strapless white jumpsuit by Stella McCartney. The pants appear too loose and too long on her. While the jumpsuit does highlight her ridiculously toned arms, overall, it isn’t an attractive look. Later in the evening, Diaz was spotted leaving a nightclub in London looking a little worse for wear.

The Golden Globe-nominated actress tried for a more conservative look at a screening for “The Other Woman” in this loose-fitting one-shoulder navy dress by Vionnet. She accessorized the look with nude pumps and a silver bracelet. While the dress isn’t one of our personal favorites – it is a bit too frumpy for the svelte star – her camaraderie with her co-stars – Kate Upton and Leslie Mann – more than makes up for this.

Cameron Diaz redeemed herself at the 20th Century Fox CinemaCon 2014 Photo Call in this grey form-fitting Victoria Beckham Spring 2014 frock, which featured a crisp white pleated trim. She complemented the dress with white Saint Laurent pumps. We think this is a winning look on the star. The dress draws our attention to Diaz’s athletic figure and her long, lean legs. Diaz was joined at the event by her equally stylish co-star, Leslie Mann. 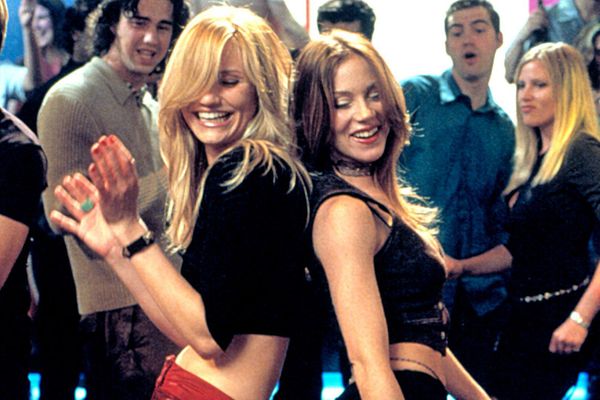 Cast Of The Sweetest Thing: How Much Are They Worth Now?