The annual CFDA Awards have brought the world’s most fashionable elites under one roof for a night to celebrate style and couture. The event is often dubbed the “Oscars of Fashion” and features some pretty intricate red carpet outfits to honor the brightest and boldest stars in the American fashion industry. Although we love how experimental some of the looks of the evening were, there was also a handful that inevitably disappointed us. Follow along for 14 of the most disappointing red carpet looks from this year’s 2018 CFDA Awards:

Actress Lupita Nyong’o opted for a black and silver Versace number for this year’s CFDA Awards. The look was highly structured and flattered her figure by cinching in at her waist and flowing out into a subtle bubble-shaped skirt. We definitely appreciate the intricate pattern work involved in the dress, but the strange necklace paired with it seemed to distract from all the details of the dress, which was quite disappointing. 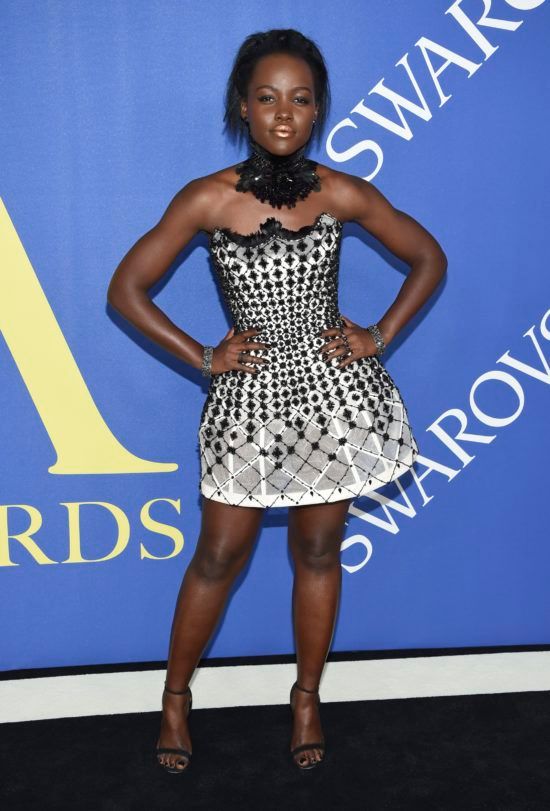 Tracee Ellis Ross is typically quite polished and stylish on the red carpet, but her CFDA look from this year wasn’t one of her best, unfortunately! The pink frothy number featured a multi-tonal color palette that flowed into a cupcake-inspired ankle-length skirt. Although we appreciate the feminine and romantic vibe of this dress, the empire waist and tiers weren’t the best options to flatter her figure and show off her waistline. 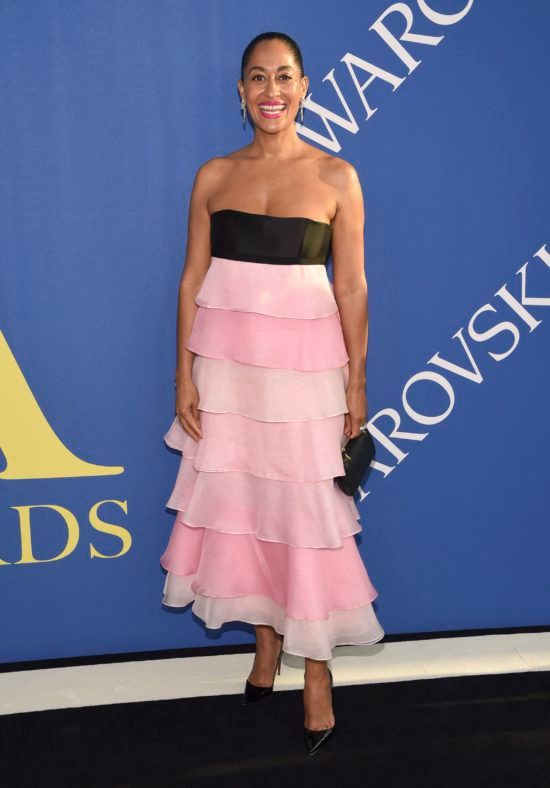 Cate Blanchett is one of Hollywood’s leading fashion icons, but this look in particular for the 2018 CFDA Awards was admittedly quite disappointing. The black blazer and dress duo didn’t seem to fit her body properly, with the shoulders and sleeves coming across a little too oversized and slouchy. To make matters worse, the sequins embellishing the sleeves, skirt, and waist were quite tacky. 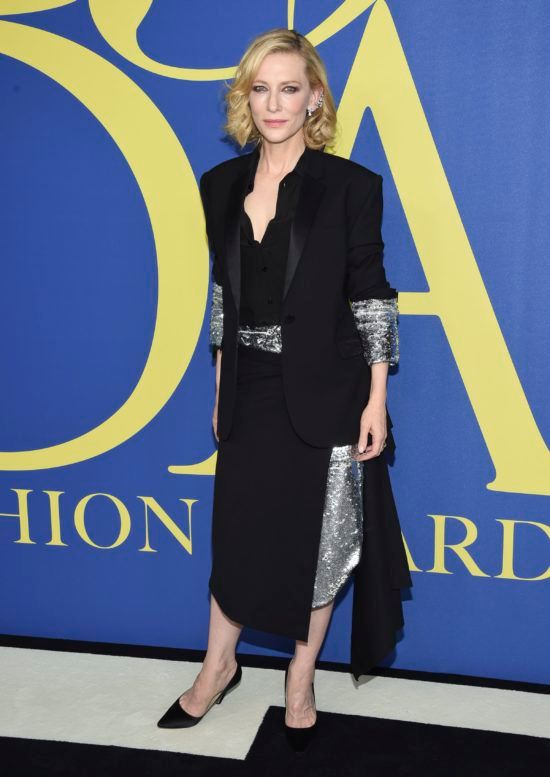 Brooke Shields is another star who didn’t quite nail masculine dressing at this year’s CFDA awards. We love a strong power suit on the red carpet, but the chunky necklace Shields wore simply detracted from what could have been a sleek, tailored suit moment. We love the cropped blazer and polished hairstyle, but the necklace was quite the fashion misstep. 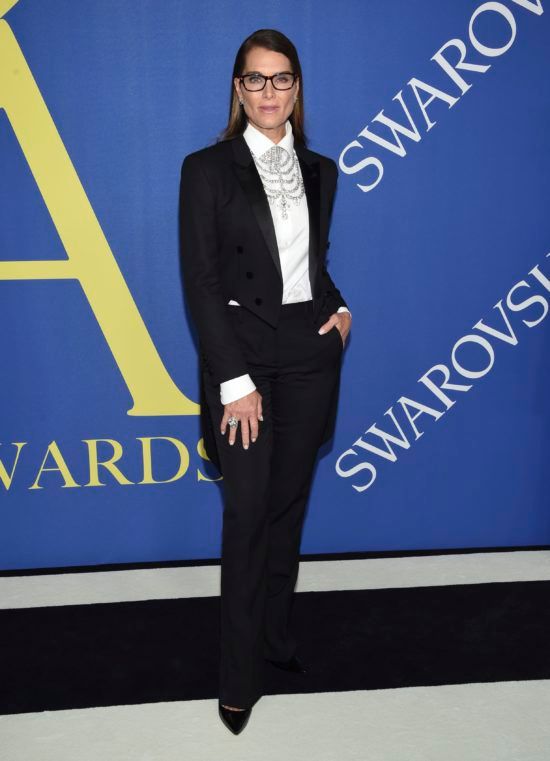 Naomi Campbell has the ideal, statuesque model figure that could seemingly pull off anything, but we have to admit we aren’t the biggest fans of her outfit for the CFDA awards this year. The red fringe Calvin Klein number was definitely fun and unique, but the asymmetrical sash of glittering fringe on one side seemed to overwhelm the look. 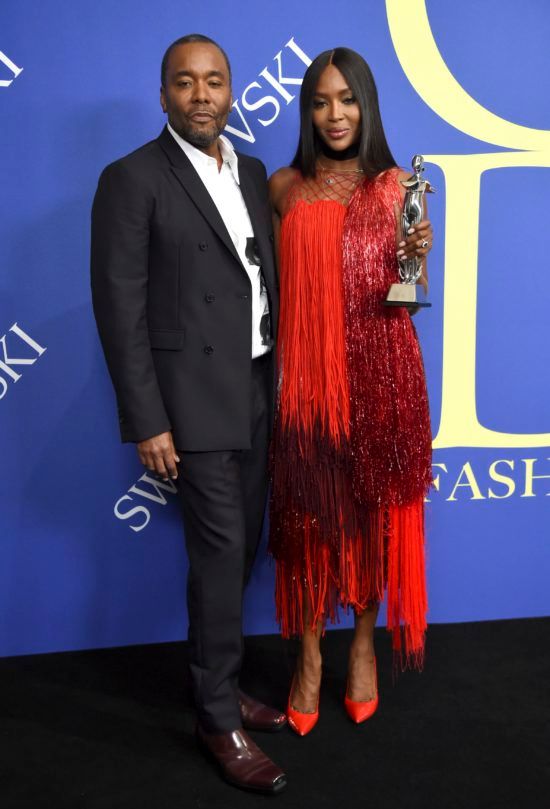 Ciara is another star who opted for a form of a power suit for this year’s CFDA Awards. Her look isn’t awful, but it didn’t leave much to the imagination and was quite revealing. It’s key to show a little skin when trying to add a feminine edge to a tailored suit, but the ultra-low neckline seemed a little much. Despite this, we love the polished and tailored vibe of her look. 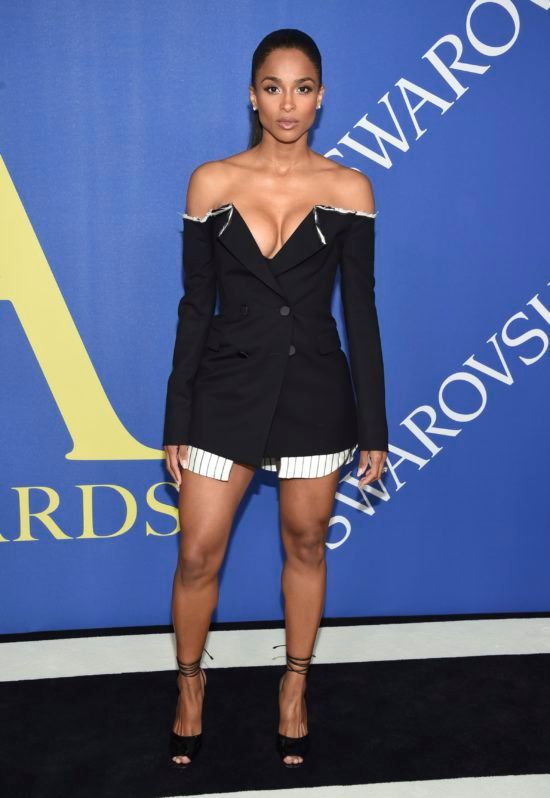 Emily Ratajkowski has one of the most enviable figures in Hollywood, but her look for this year’s CFDA awards did not do her justice! The model wore a black lace number that featured a corset bodice, sheer sleeves, and a floral-printed skirt. There was simply too much happening with this look and the floral print on the skirt didn’t seem to quite fit with all the sultry lace detailing on the top half of the dress. 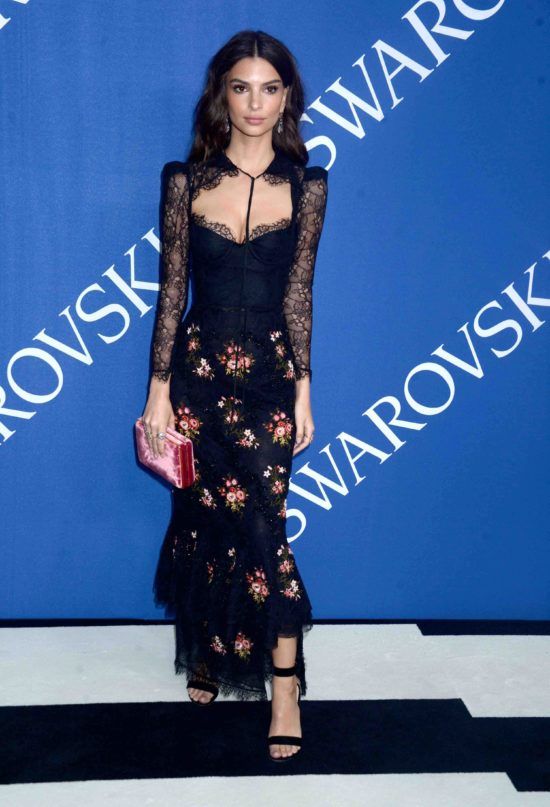 Power tailoring seemed to be an ongoing trend on the CFDA red carpet this year. Busy Philipps adopted the trend and opted for an aquamarine metallic suit for the event. We love how the bright pop of color brings a feminine vibe to her look, but the metallic texture seemed quite heavy and harsh. We would have much preferred to see Philipps in something a little airier and light for the spring event! 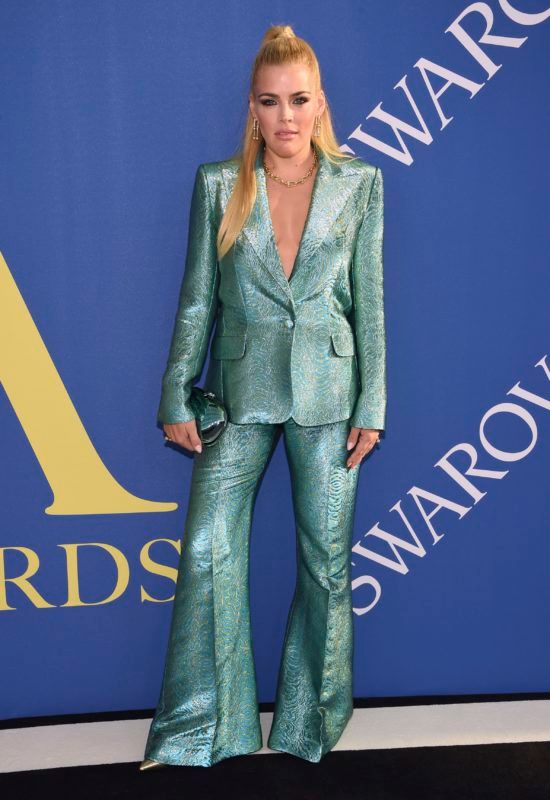 Ashley Graham has made waves this year in the American fashion industry for her push towards a more body positive outlook on style. She typically looks polished and fashion-forward for red carpet events, but we were quite underwhelmed by her choice of outfit for the CFDAs this year. The nude dress featured sheer paneling, long sleeves, and a body-hugging shape, yet the color totally washed her out, especially since the garment didn’t have any embellishment to give it texture. 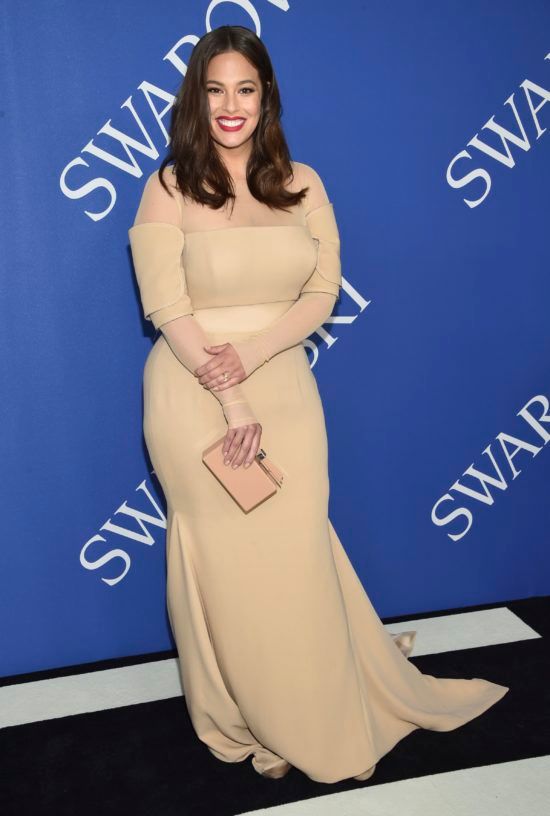 Olivia Culpo is one of Hollywood’s biggest up and coming fashion icons! The star has blown up all over Instagram and is known for her trendy and enviable designer street style outfits. Since she’s so bold with her fashion, we had high expectations for her CFDA look this year, but we were somewhat disappointed. Culpo opted for a sunny yellow dress that was surprisingly quite simple and underwhelming, especially for a star who’s so involved in the American fashion industry. It seemed more like a dress for a casual beach day than a formal fashion event. 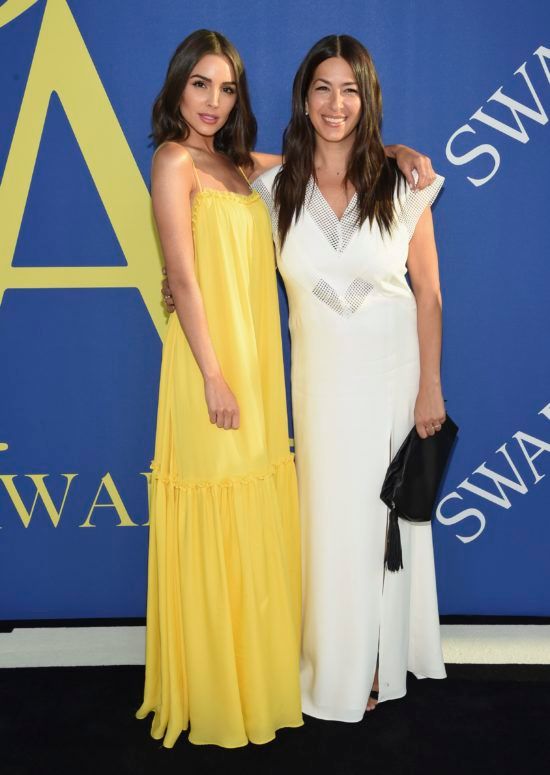 Kendall Jenner definitely made an entrance at this year’s CFDA Awards where she stepped out wearing this lavender feathered number by Alexandre Vauthier. The look featured an asymmetrical shape which slung off one shoulder and cascaded down one leg. Luckily, Kendall is one of the few stars who has the statuesque figure to rock a look like this and still look totally glam, but we also have to admit that the look wasn’t one of the best we’ve seen from her. 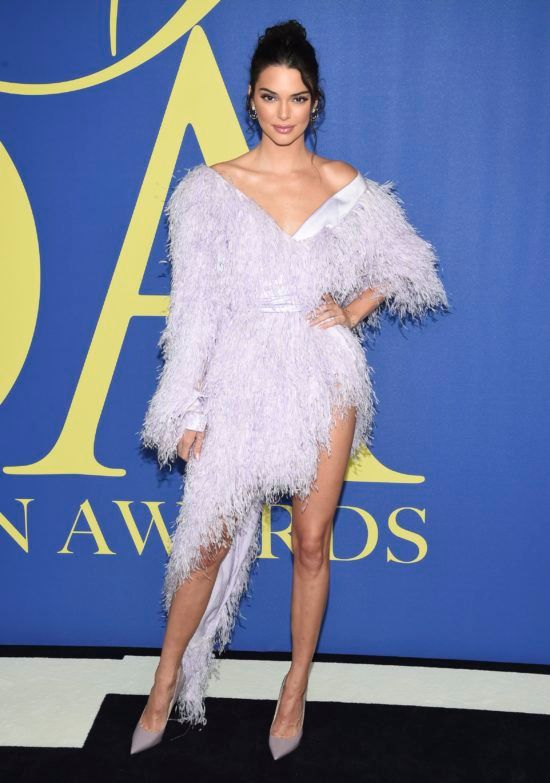 Gigi Hadid is fashion’s it-girl at the moment and her appearance at the CFDAs was one of the most anticipated. Her Met Gala moment this year was seriously incredible, but we, unfortunately, can’t say the same for her look for this year’s CFDA Awards. The multi-color, skintight jumpsuit was chaotic and bizarre, which was a rare fashion misstep for the ultra stylish model. 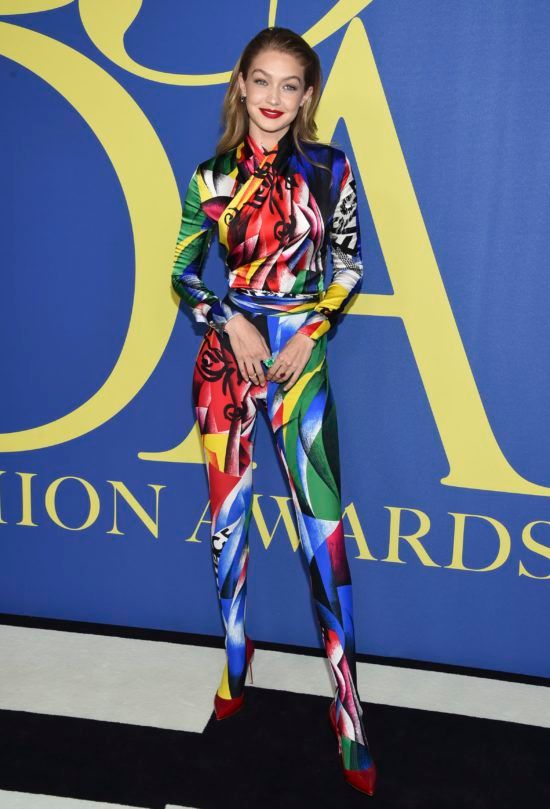 Whoopi Goldberg stood out in a full, fuschia pink suit last night at the 2018 CFDA Awards. Monochrome dressing was a huge trend for 2018, which could have made this a winning fashion moment; however, Goldberg’s wide-brimmed hat and sunglasses made this look come across as more theatrical than a respectable fashion moment. We appreciate her attempt to follow the trends, but it was simply a little overdone because of her questionable accessories. 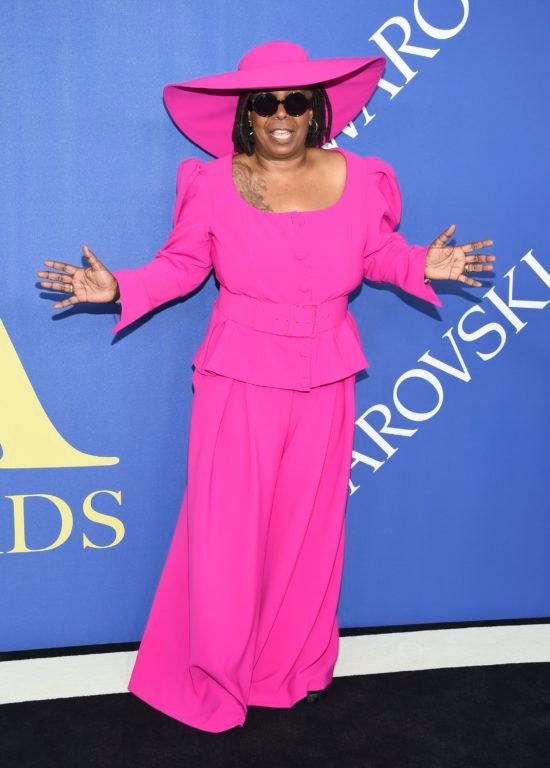 Kaia Gerber, daughter of Cindy Crawford, has become one of fashion’s it-girls to watch this past year while making debuts on Chanel and Alexander Wang runways. Her look for the CFDAs, however, was definitely one of the biggest question marks of the event. Her outfit consisted of a casual, cropped shirtdress and a printed miniskirt which she paired with black tights. The look was messy, overly relaxed and quite confusing for a prestigious fashion event. 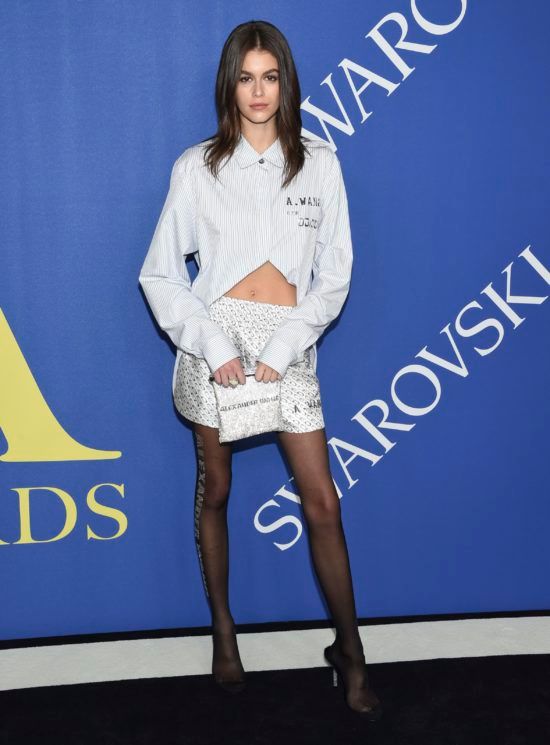 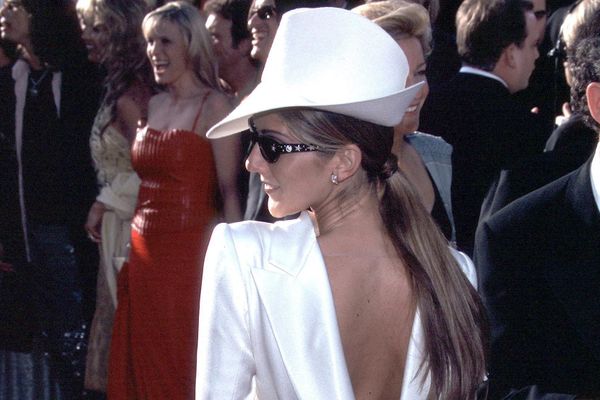