When it comes to awards shows and the red carpet, the CMT awards definitely lean towards the more casual side. The stars of country music typically step out wearing minidresses and jumpsuits rather than full-blown ballgowns, which is a nice change of pace from the formality of the Oscars and Golden Globes. While the stars of country music definitely know how to work with sequins and fringe, this isn’t always for the better! Follow along as we round up all the red carpet looks from this year’s 2019 CMT awards:

Danielle Bradbery stepped out looking glitzy for this year’s CMT awards where she rocked a long sleeve mini dress with crystal fringe. This look was the perfect balance of glamour with a touch of country! 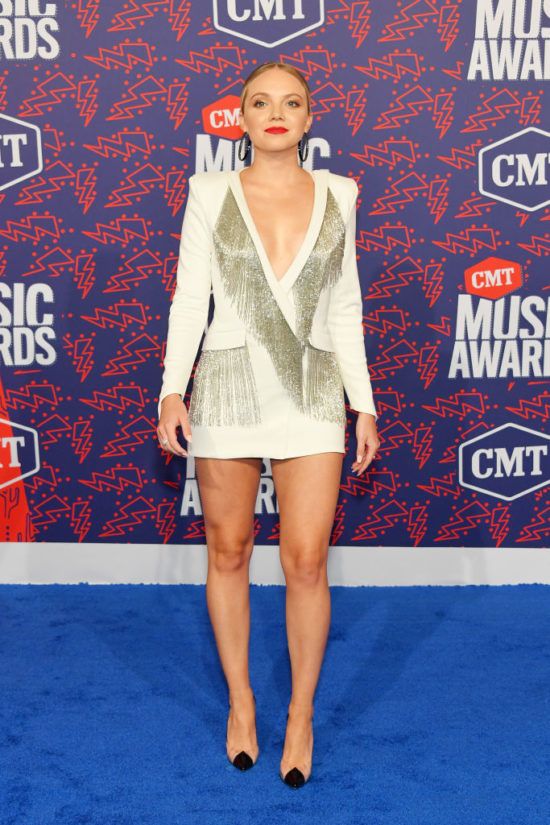 As much as we love seeing Lauren and Thomas Rhett together on the red carpet looking adorable, we have to admit we weren’t huge fans of Lauren’s ensemble for this year’s CMT awards. The leopard skirt didn’t seem to pair well with the pink tank and the belt made things appear a little too casual. 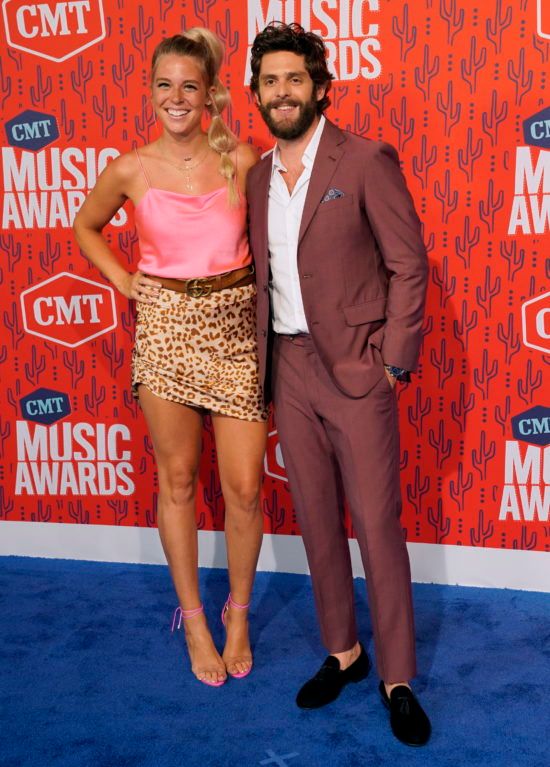 Sarah Hyland stole the show at the annual CMT awards where she stepped out wearing a black sparkling mini dress with exaggerated shoulders. We love that this look was still refined and dramatic with the sleek shape, but felt event-appropriate with the mini-length hemline. 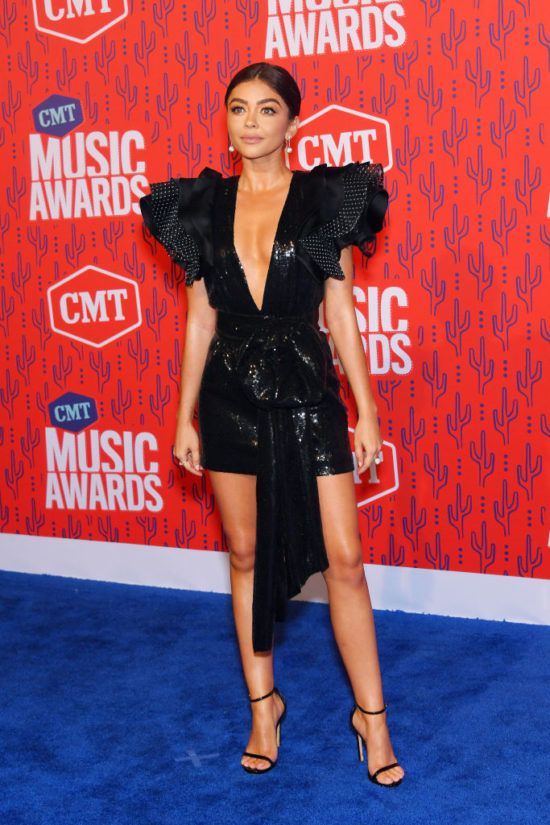 Deana Carter left us feeling seriously underwhelmed with her look for this year’s CMT awards. The fuschia shift dress lacked any interesting or flashy detailing to make it stand out in the crowd which made it admittedly quite dull. 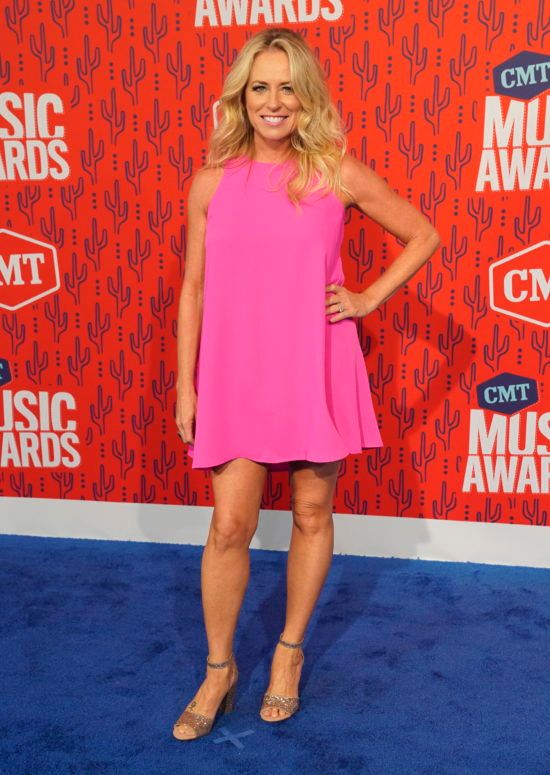 Maddie and Tae always nail their red carpet appearances and the 2019 CMT awards were no exception. While Maddie opted for a black strapless gown with pink sequins and dramatic draping, Tae donned a sleek rose gold dress which she topped with a sparkling disco ball clutch. 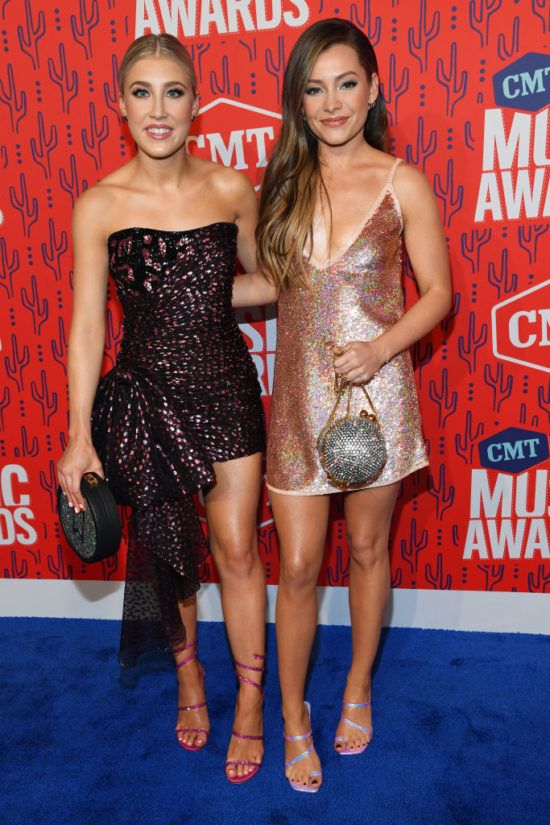 Brooke Eden stepped out at the CMT awards this year wearing a black tank and flashy blue pants. We have to admit this look felt a little too bohemian rather than country, which is why we were a little confused and let down by it. 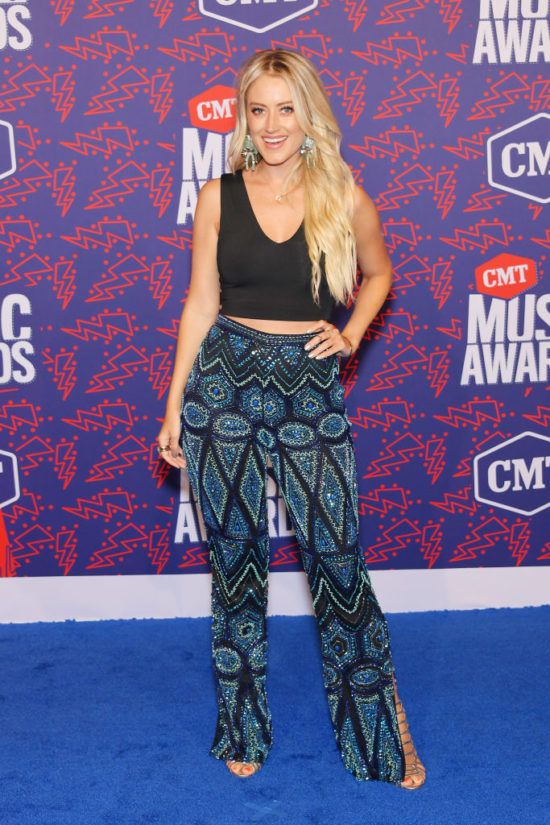 Maren Morris was a total bombshell at this year’s CMT awards where she stepped out wearing a white embellished mini dress with sultry cutouts along the bodice. The look was glitzy, sexy and glamorous, which made it perfect for the CMT red carpet. 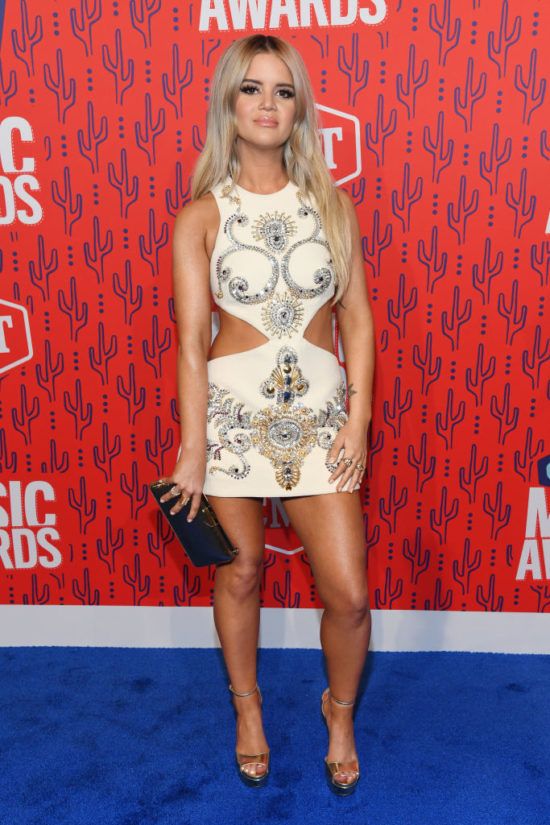 Meghan Linsey stepped out wearing quite a bizarre ensemble for this year’s CMT awards. She opted for a skintight bedazzled jumpsuit which she paired with a floor-length cardigan and tan wide-brim hat. The entire look did not seem to flow together and came across admittedly a little tacky. 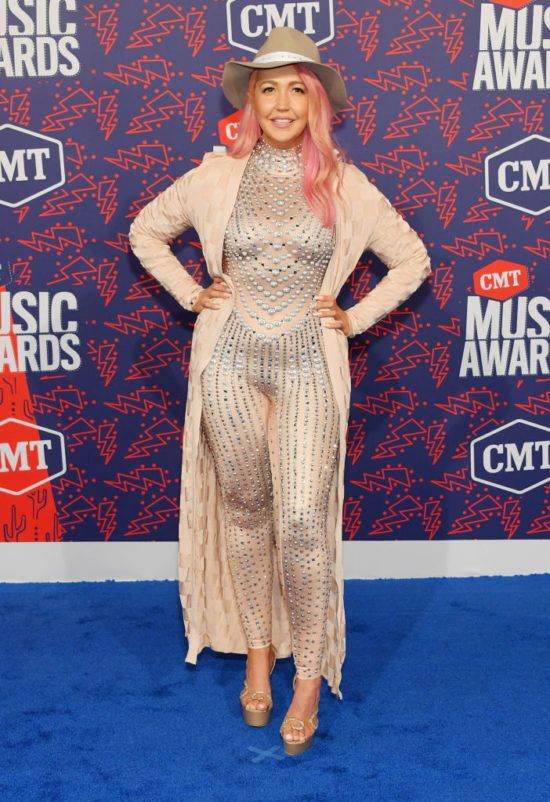 Cassadee Pope was a bombshell in red at this year’s CMT awards where she wore a flatting jumpsuit with a train and some peek-a-boo lace. This look was the perfect combination of flashy and feminine. 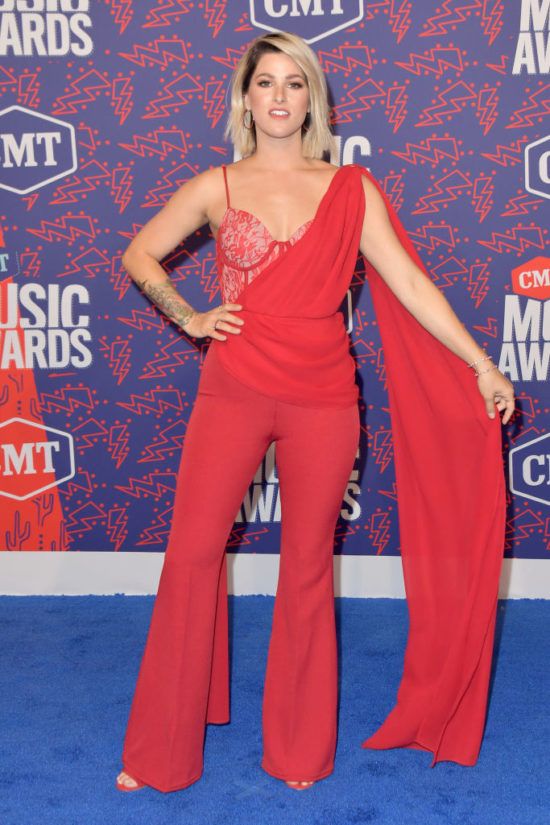 Leah Turner walked the CMT red carpet this year wearing a fuschia satin wrap dress. While the dress itself isn’t awful, we simply can’t overlook her unfortunate spray tan and poof-hairstyle which both felt a little outdated. 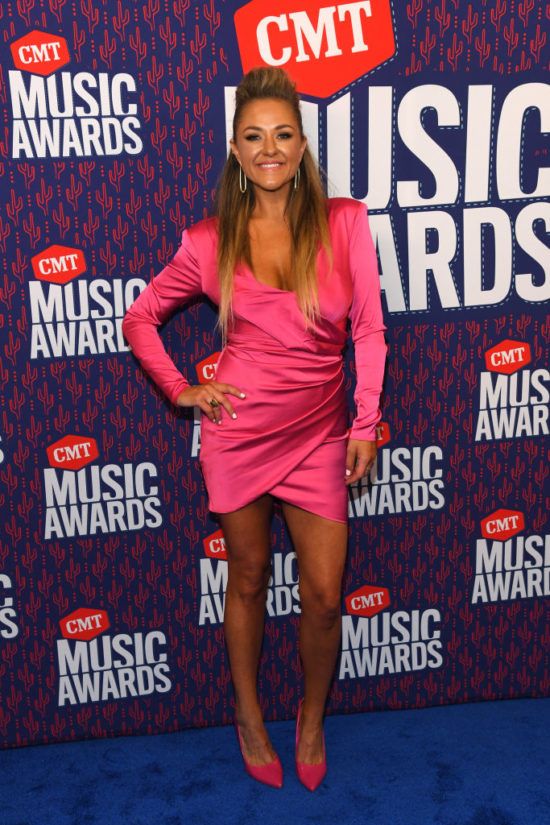 Jessie James Decker glowed on the CMT red carpet where she stepped out with her husband, Eric Decker. Jessie opted for a light pink suede dress which showed off her sunkissed skin and toned legs flawlessly. 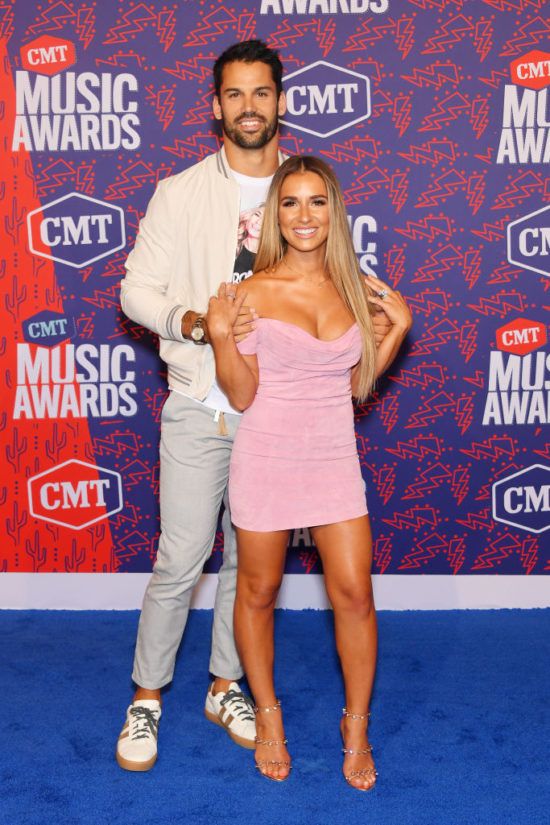 Trisha Yearwood opted for a black ruched gown for this year’s CMT awards that we actually found really flattering on her. The patterned jacket, however, seemed to distract from the elegance and simplicity of the dress which was quite disappointing. Kate Bosworth gave us all the mermaid vibes at this year’s CMT Awards red carpet. The sleek aquamarine dress fit her like a glove and the slight sparkle texture of the dress was really glamorous. 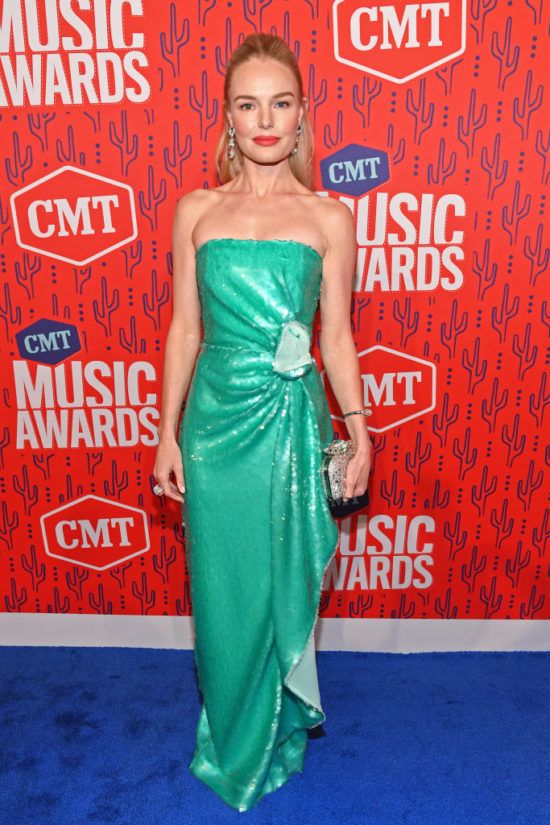 RaeLynn missed the mark with her look for this year’s CMT awards which consisted of a dramatic blue floral dress with a long train. The look felt a little extravagant for the CMT’s and the floral print was quite distracting. Lauren Bushnell dazzled at the 2019 CMT awards where she walked the red carpet in a crisp two-piece set. A look like this proves that sometimes simplicity is best when it comes to fashion! 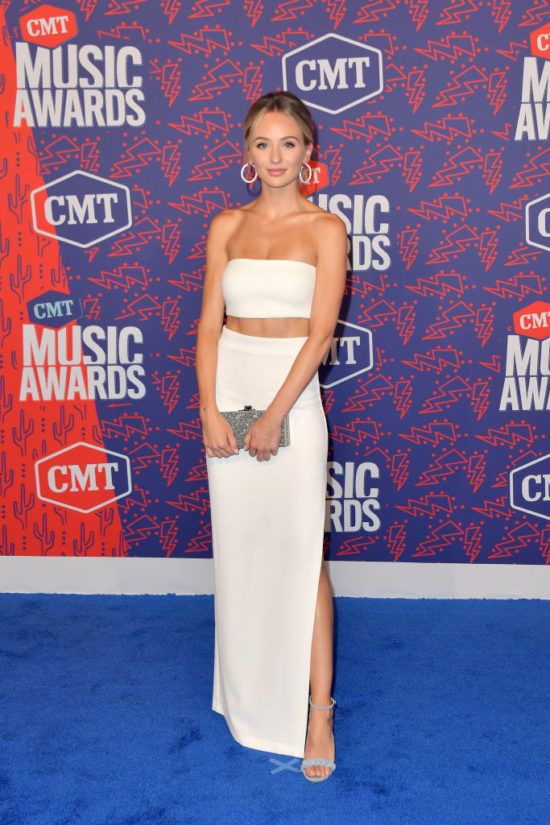 We weren’t huge fans of Sheryl Crow’s bohemian look for this year’s CMT awards which consisted of a lot of fabric, colors, and layers. We would have much preferred something more simple with less going on at once! Carrie Underwood was the belle of the ball at this year’s CMT awards where she stepped out wearing a gorgeous beaded minidress. We absolutely love all the detail of this look which was unique and glitzy! 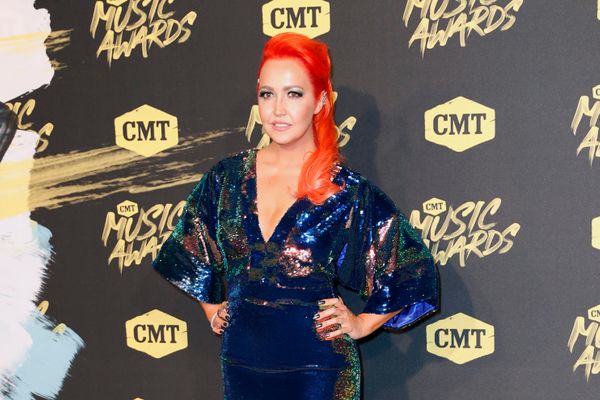