This year’s annual CMT Music Awards honored some of the most talented stars in the country music industry! Although the country industry doesn’t necessarily have a reputation for stellar red carpet moments, this year’s CMT awards have proved differently. There were quite a few head-turning fashion moments this year that are worthy of note, so follow along for 12 of the best dressed country stars from this year’s CMT Awards:

Charles Esten is such a stud that it doesn’t take much for him to look dapper! He stepped out at this year’s CMT Awards wearing a sleek black tuxedo that was classic and traditional. Often the men in the country industry tend to dress up in tacky bedazzled jackets or oversized cowboy hats, but Esten proved that it doesn’t require all that embellishment to stand out on the red carpet. 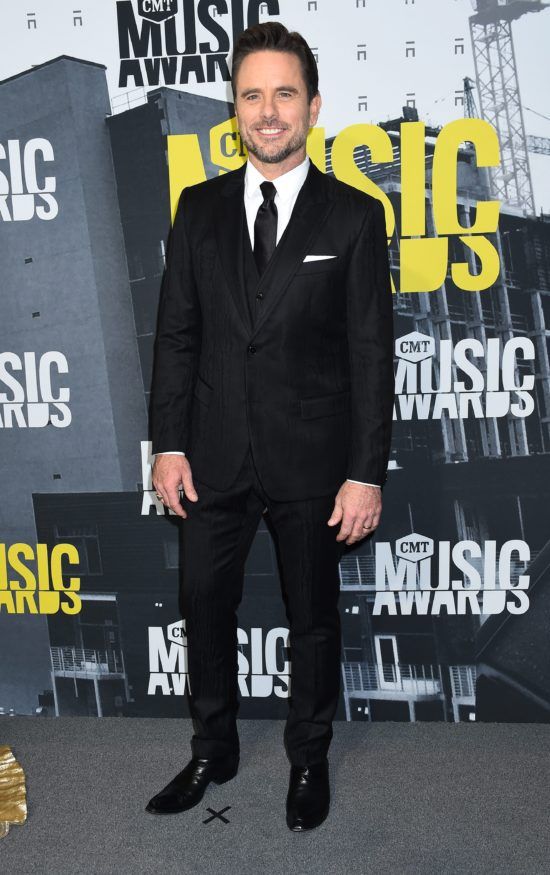 Sequins are a tricky trend to pull off on the red carpet, but Chrissy Metz did so flawlessly. The This Is Us star rocked a mid-length sequined dress with a subtle fringe along the hemline. Typically sequins come across tacky when it’s in a bold color, so the neutral choice of black was perfect for a classy red carpet moment. 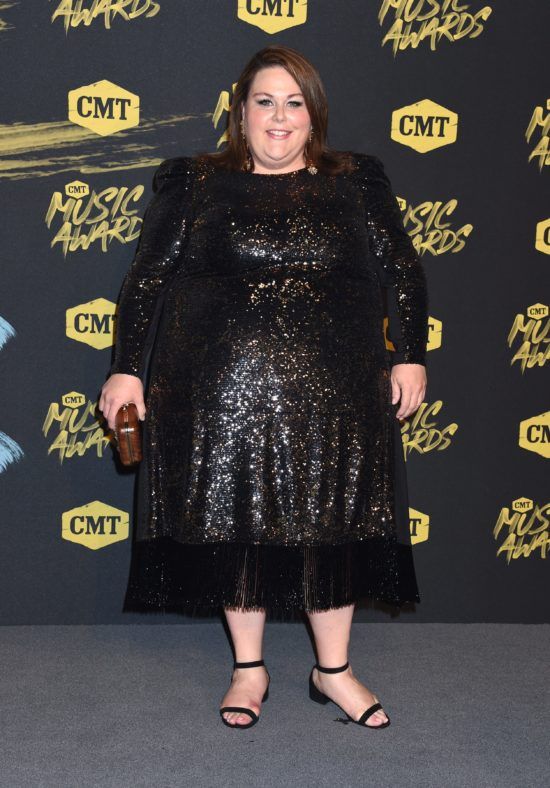 Cassadee Pope made jaws drop on the CMT red carpet this year in this sleek, two-piece number! The asymmetrical metallic set showed the perfect amount of skin to be subtly sexy without overdoing it. One-shoulder pieces are a huge trend this season so we love that Pope adopted this trend into her CMT red carpet look. The pop of pink from her shoes was also the perfect final touch! 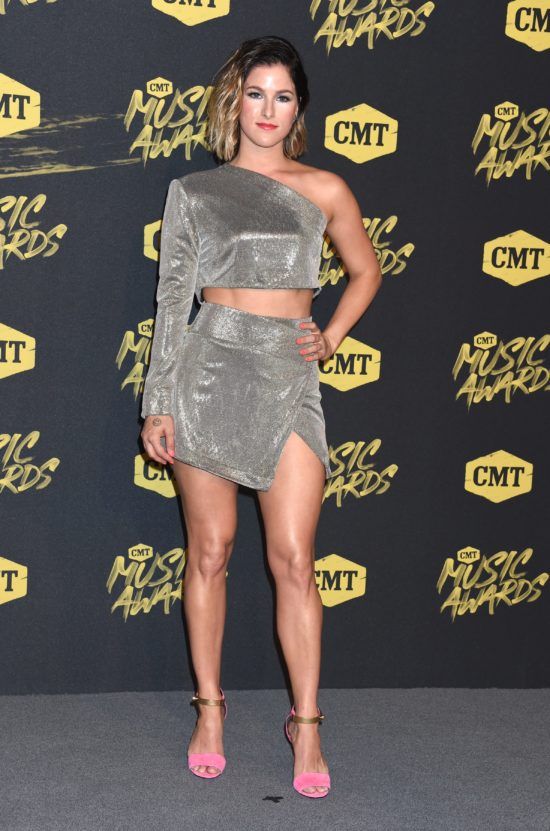 Country music singer Lauren Alaina made heads turn on this year’s CMT red carpet! Her look was a little more extravagant than others but we love that she took the opportunity to dress to the nines. Her look featured a high-low hemline, exaggerated ruffled shoulder and a sleek belt which cinched in her waist. The look was totally glamorous and memorable because of how unique it was! 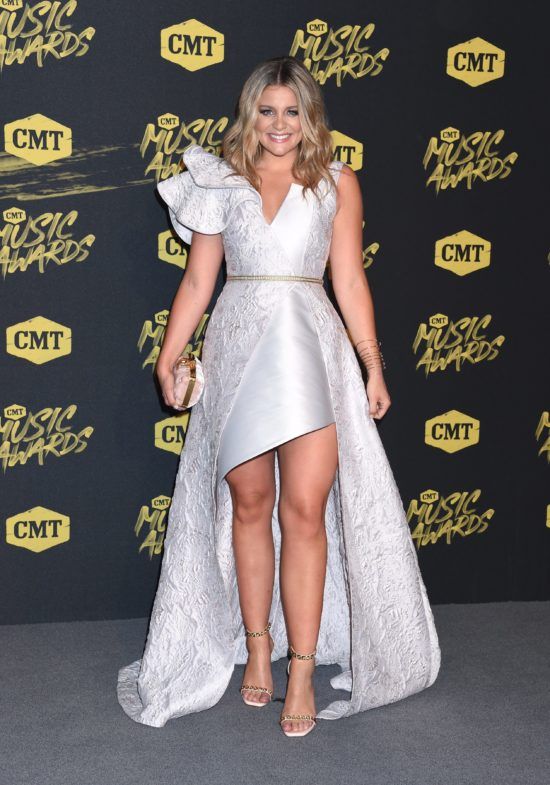 Brooke Hogan looked ethereal and glowing on the CMT red carpet where she stepped out wearing this sparkling pale blue number! We love all the details of this dress and how flattering it is for her figure. The subtle sheer detailing of the skirt and the crystal embellishment made this look a serious showstopper. 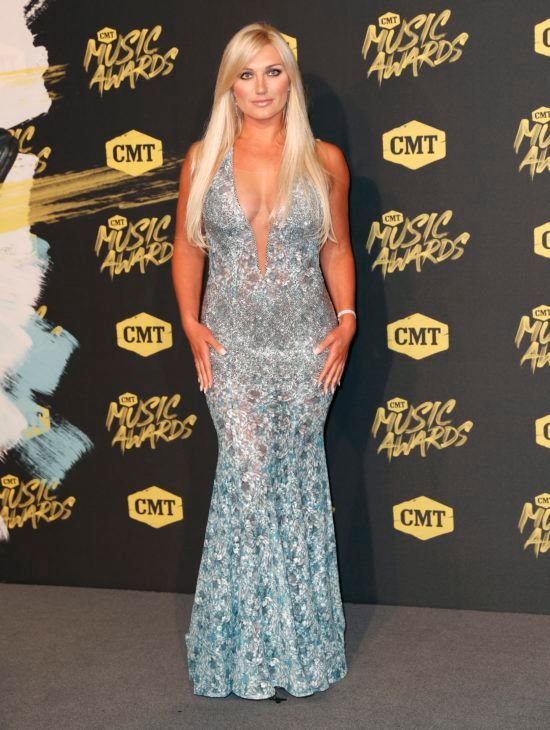 Lindsey Vonn looked like an absolute bombshell on the 2018 CMT red carpet this year. She was one of the few stars who wore red, which made this scarlet number stand out even more. We love the one-shoulder and knot detailing of the bodice and the dress fit her like a glove. She topped the look with a gold metallic clutch and wore her hair sleek and straight. 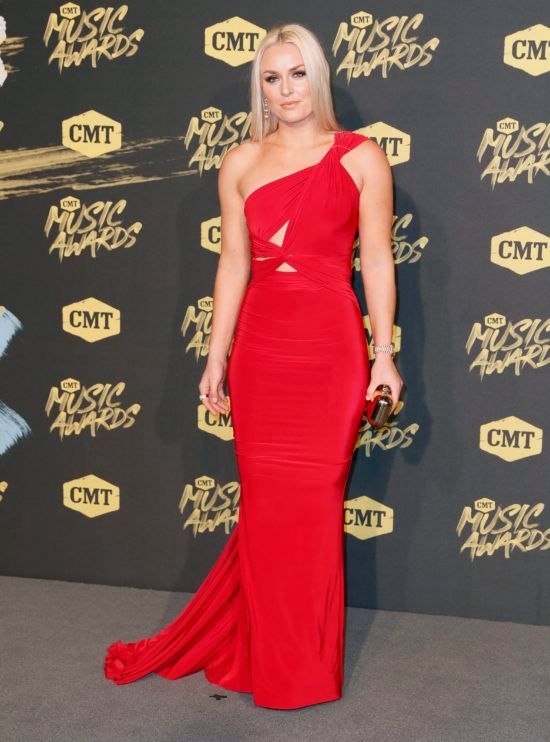 Luke Bryan was all smiles on last night’s CMT red carpet and is another country star who proved it doesn’t take tacky embellishment to stand out! Bryan wore a classic tuxedo but left the buttons of his shirt undone for a slightly more casual vibe. The suit fit him well and Bryan was undeniably one of the best-dressed men of the evening. 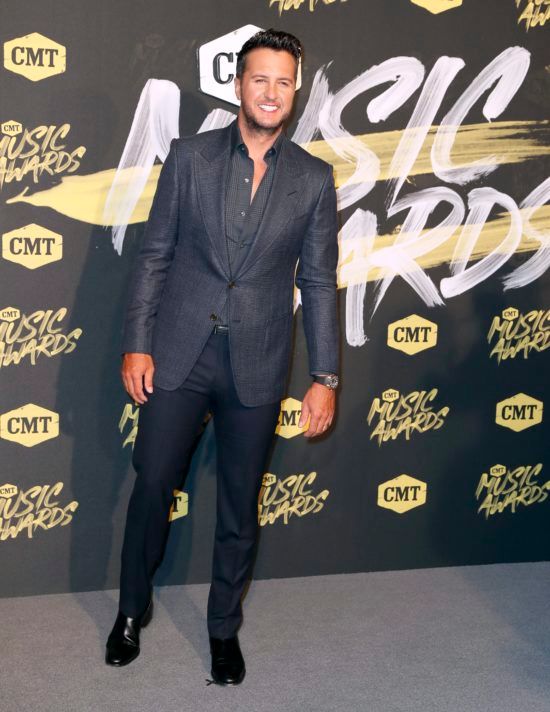 Lennon and Maisy Stella are a serious power duo in the country music industry and, clearly, they know what they’re doing when it comes to fashion. Lennon rocked a long-sleeve mini dress with a silver geometric print on it, which she topped with a pair of fun fluffy sandals. Her sister, Lennon, rocked a flowy white chiffon top and a black mini skirt which was super sophisticated, but she balanced it with bohemian beach waves in her hair. 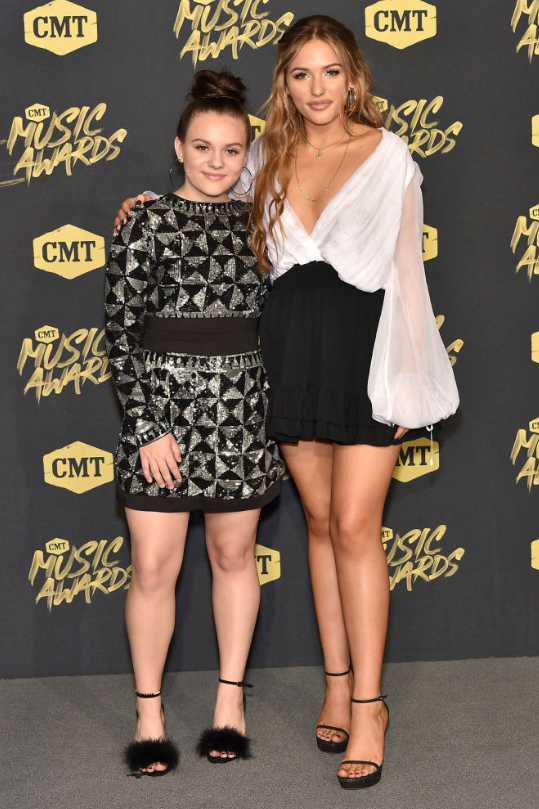 Danielle Bradbery was a vision in white on last night’s CMT red carpet! The country music singer rocked a crisp white mini dress that featured slits along the thighs and long sleeves. We love the added detail on the studs along the shoulders which really amped up the look and added the red carpet glamour factor. She topped her ensemble with a pop of red on her lips and a pair of metallic strappy sandals. 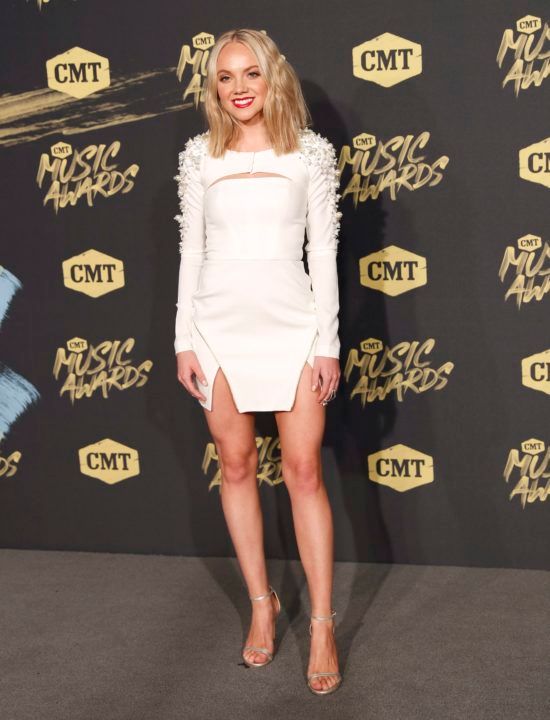 Although not a singer herself, Brantley Gilbert’s wife Amber Cochran stole the show at last night’s CMT Awards! The brunette beauty rocked a sheer black dress that was the perfect balance of sultriness and femininity. The look featured soft floral embroidery which was a great contrast to the sexy corset bodice and sheer paneling. 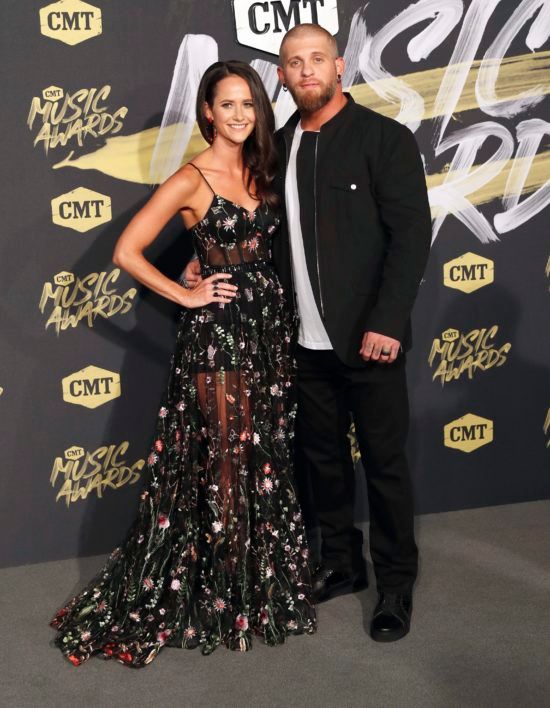 Kelly Clarkson looked seriously stunning on this year’s CMT red carpet! The black number was relatively simple but featured subtle details such as the puffed shoulders and silver embroidery which really made it unique. For added detail, Clarkson opted for a pair of dramatic silver earrings which really pulled the look together. She went a little more dramatic with her makeup, but left her hair sleek and straight. 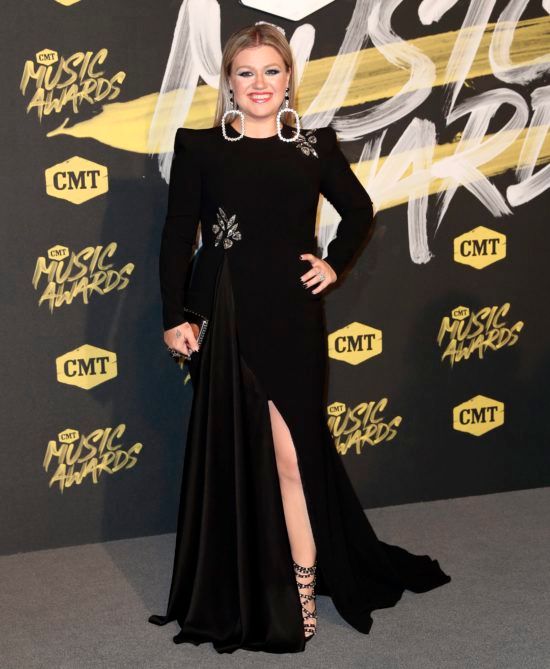 Of all the stars on this year’s CMT red carpet, we’d have to say that Carrie Underwood was the best dressed. The country music singer rocked a sleek yellow and silver minidress which was super unique but still flattering. From the textured pattern to the ruffle detailing and the low cut neckline, this dress was seriously a work of art! 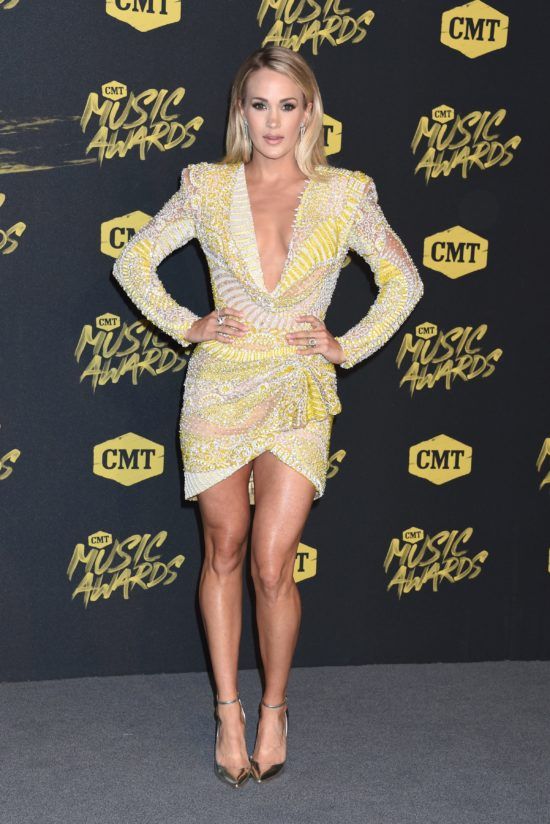 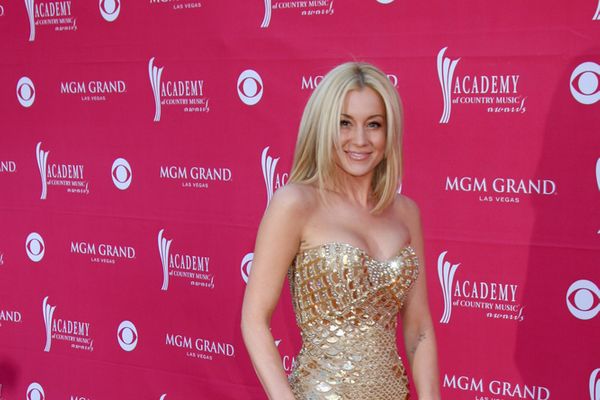