The Critics’ Choice Awards tend to be on the more casual side when it comes to award shows, but that’s not to say the event doesn’t create some absolutely fabulous fashion moments! This particular Critics’ Choice awards show definitely had quite a standard to live up to after the all-black #TimesUp dress code from the 2018 Golden Globes earlier this week, but many stars rose to the occasion! Follow along as we recall 12 of the most stunning looks from last night’s Critics’ Choice Awards:

Emilia Clarke looked positively radiant last night in this sparkle-studded Dolce and Gabanna number. The look was quite simple and clean, but sometimes that’s all it takes for a winning red carpet moment. The dress hugged her curves, was perfectly tailored to her body and her cropped platinum locks added some serious brownie points in the beauty department!

Saorise Ronan’s blush pink look was another prime example of simple elegance on last night’s Critics’ Choice Awards red carpet! Her minimalistic dress featured a 3/4 length sleeve that cinched at the waist and a flattering ruching along the waist. Since the sweet Michael Kors number was so simple, Saoirse rocked a dramatic oxblood lip that brought the glamour factor to her look.

Mary J. Blige’s birthday was actually on the same day as the Critics’ Choice Awards yesterday, so naturally, she wore a sparkly gown fit for a birthday girl! The Vivienne Westwood number made Blige absolutely glow while she strutted down the red carpet and the sleek, strapless number fit her like a glove to show off her hourglass figure.

Octavia Spencer rocked Ultra Violet, the color of the year, at the 2018 Critics’ Choice awards last night! The stunning Tadashi Shoji number featured a lace-covered bodice, cap sleeves, and flattering velvet details. The dress flourished into a full pleated skirt and absolutely flattered her figure in the best possible way! She topped the look with soft waves and rocked a light wash of plum on her lips.

Rachel Brosnahan rocked a lovely powder pink Zuhair Murad gown at the Critics’ Choice Awards last night! “I have never worn pink. It makes me feel like a princess,” Rachel commented of the romantic dress. The intricate beaded designs and subtle sparkle of this look definitely made the star standout on the red carpet and the soft color paired perfectly with her porcelain complexion and dark locks.

Olivia Munn hosted last night’s award show, so naturally, she underwent a few outfit changes along the way! One of our favorite looks from the night was this coral pink number she wore on the red carpet! The sleek gown hugged her curves in all the right places and the dramatic, silver neckline embellishment added elegance and drama to the simplistic gown.

Samira Wiley looked positively stunning on the Critics’ Choice Awards red carpet wearing this deep navy Rebecca Vallance gown! The off-the-shoulder number featured the perfect amount of drama with the ruffled details along the neckline and trailing along the slit on the skirt. The dress flattered her figure flawlessly and brought elegance and class to the red carpet.

Jessica Biel’s sheer, abstract gown had a few controversial reviews, but we thought she looked stunning! The red pops of color were the perfect flattering shade with her chestnut locks and the sheer paneling added glamour and drama. The look is different and an undeniable red carpet risk, which is exactly why we appreciate it!

Allison Janney’s Critics’ Choice Awards look from last night was an absolute crowd pleaser! The cobalt shade was the perfect pop against Janney’s warm complexion and eye color. The sheer number was covered completely in subtle sparkle which added a touch of glitz. We love the simplistic elegance and glamour of this look!

Kaley Cuoco was a blonde bombshell on this year’s Critics’ Choice Awards red carpet! The blush pink color of the paneled gown paired fabulously with her platinum locks and tanned skin. We love that she balanced the plunging neckline with a feminine flutter sleeve and the tiered detailing along the skirt made Cuoco look sleek and slender!

Sarah Hyland was a brunette beauty on the red carpet last night! Tiered dresses are tricky to pull off, but Hyland did so flawlessly because of how simple the dress was. We love the hint of sparkle on the black bodice and the elegant bun made her look a true prima ballerina. The pop of color on her lips undeniably brought the drama and elegance to her otherwise quite dainty and feminine look.

Gal Gadot was the star of the show at last night’s Critics’ Choice Awards! Her silver gown was glitzy and had all eyes on her and totally turned heads! We love that her gown had unique black tassel detailing along the waist that was subtle yet still an extra detail for visual interest. The plunging neckline was revealing yet totally classy, especially when paired with her elegant sleek locks and crimson pout. 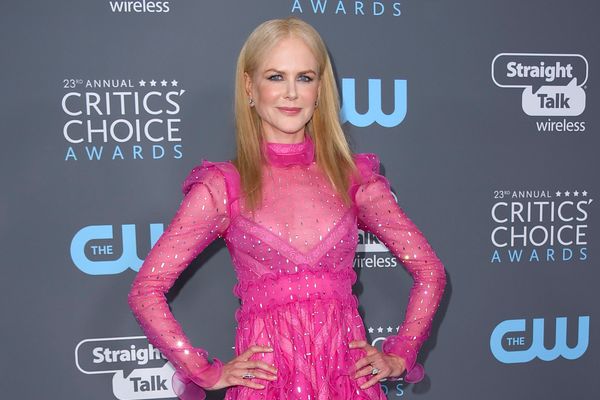