The 70th annual Primetime Emmy Awards took place last night with a star-studded lineup of attendees celebrating their achievements. Although this year’s Emmy Awards had a particularly excellent fashion presence on the red carpet, there were also a few misses that left us feeling quite disappointed. Follow along for the worst-dressed stars from this year’s 2018 Emmy Awards:

Game of Thone’s actress Gwendoline Christie attended the Emmys rocking this year’s most prominent color trend — yellow! Unfortunately, we’re not sure this was the best choice to flatter her fair complexion and blonde tresses. Aside from the color issue, the satin texture held on to wrinkles which made it appear a little cheap and inappropriate for a formal award show.

Alexis Bledel has had quite a few red carpet fashion mishaps in the past, and unfortunately, her dress for this year’s Emmy Awards was no different. While the shape and soft pink color were flattering on Bledel, we can’t say the same for the strange yellow tulle layering and the asymmetrical embroidery on the bodice. Albeit, her sleek hair and natural-glam makeup were stunning!

Rainbow stripes have been a huge trend in the world of fashion, especially this past summer. Tiffany Haddish channeled the trend for this year’s Emmy’s red carpet, but unfortunately, we feel she somewhat missed the mark. Many fashion critics compared her ensemble to a parachute, which is a resemblance we can definitely understand.

In terms of fashion, Connie Britton didn’t make the best impression at the 70th annual Emmy Awards. Her floral-print gown came across slightly too casual for the event and the busy print was admittedly quite tacky.

Tina Fey has had more than a handful of stellar red carpet fashion moments at awards shows, but unfortunately, we weren’t the biggest fans of her look for this year’s Emmys. Her autumn-inspired dress featured a pleated skirt, lace ruffling along the chest and a subtle floral print. Although the dress in itself wasn’t too bad, we feel the thick, black belt added a casual element to the look that wasn’t necessary.

Big Little Lies actress Laura Dern is quite unpredictable when it comes to her red carpet fashion, but her look for this year’s Emmys was a definite miss. The look featured a corset-style dress which she layered on top of a satin blouse. The two pieces did not seem to pair well with each other, but especially in combination with a string of double-layered pearls.

Comedian Michelle Wolf stepped onto the Emmy’s red carpet wearing a bright purple gown that was completely encrusted with sequins. It’s difficult to pull off both a bright color and sequins together in one look, and we’re not totally convinced Michelle made it work. The neckline was somewhat bizarre and the sequins seemed to highlight her figure in the wrong places.

Comedian Samantha Bee stepped onto the Emmy’s red carpet wearing an indigo dress that featured gold metallic detailing along the collar. Although we’re big fans of both wrap and blazer dresses, this look worn by Bee didn’t seem to know which one it wanted to be. The result? A definite red carpet misstep.

Chrissy Teigen is always one of our most anticipated awards show guests when it comes to fashion, which is why we were all the more disappointed with her look for the Emmys. The look seemed quite stifling and uncomfortable with its bodycon shape, choker-style neckline, and thigh-high slit.

Although we appreciate Poppy Delevingne opting for something completely new and unexpected on the 2018 Emmy’s red carpet, we’re not totally sure she pulled off the look. The dress itself is beautiful, the problem being that her figure is so petite that it couldn’t support such a voluminous dress with so much fabric.

Emilia Clarke opted for a lace Dior dress on the 2018 Emmys red carpet, but the proportions were all wrong to work with her figure. Typically we prefer dresses that cinch at the smallest part of the waist rather than the hips for the most flattering look possible. Aside from the proportions, the heavy black lace and dark floral applique weren’t the best choices.

Many fashion critics had mixed opinions about Tracee Ellis Ross’ oversized hot pink red carpet look for this year’s Emmys. Although fans are divided, we have to admit we don’t love this look. It was more haute couture and avant-garde than a dress worn on the Emmy’s red carpet. The look, although unique and fun, definitely overwhelmed her figure. 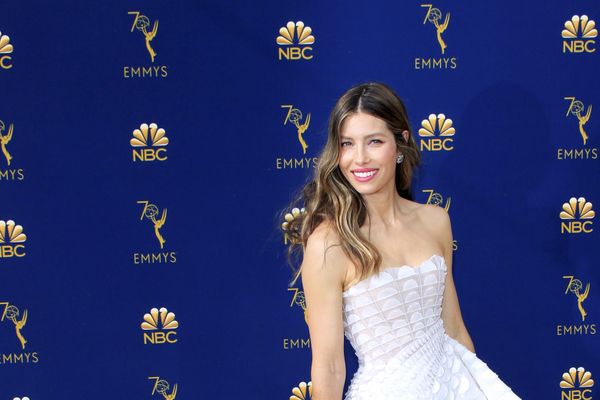