Tessa Thompson definitely took a chance with this rainbow ensemble! Although we appreciate a risk-taker on the red carpet, we’re not completely convinced with this colorful gown. The pleated and metallic detailing is definitely on trend but the patchwork coloring is a little distracting and over-the-top. This look would have been stunning if the coloring was limited to one or two shades rather than such a wide variety.

Priyanka Chopra’s feathered frock from last night definitely had us puzzled. There is absolutely an appropriate way to rock feathers well on the red carpet and we’re not completely convinced that this is it! The dress flared out into the textured feathers at an awkward height and the edgy, metallic detailing of the bodice clashed with the delicate, feminine feathers. The overall ensemble was awkwardly designed and did not flatter her figure.

Mandy Moore is such a natural beauty that it would seem she could do no wrong on the red carpet… which left us highly disappointed when she stepped out in this layered ensemble. Moore has such an enviable figure that we wish she had opted for a shape a little more flattering than this cupcake-inspired, poofy look. We can definitely appreciate a tiered gown, but the white coloring of the center tier adds an aspect of tackiness that we can’t overlook.

Vinyl is a huge trend right now, but it definitely needs to be styled correctly and Debra Messing’s look was an unfortunate miss at taking advantage of this trend! The Will & Grace star’s dress was so metallic that it almost appeared wet or to be made of plastic. A material like this has no place on the red carpet and the overwhelming shape of the dress made this rubbery texture appear even more awkward!

Of all the red carpet looks last night, Ariel Winter’s definitely made us the most uncomfortable! The uber thigh-high slits on both sides of her legs were too revealing to be flattering and we would have loved to see her opt for one slit at a more modest height. The Modern Family star even had to have her boyfriend help her place the slits perfectly multiple times throughout the evening to avoid a wardrobe malfunction. Rather than swooning over her red carpet ensemble, we were mostly cringing and hoping that the leggy dress wouldn’t fall out of place! 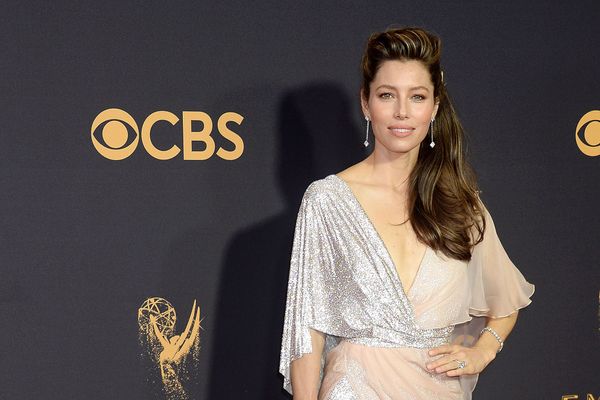