Emma Roberts is one of the few actresses that grew up in the limelight and has transitioned from an innocent tween to a fashion queen through her progression into adulthood. Although her name typically conjures images of her days on the sets of Nancy Drew and Aquamarine, her style has significantly evolved from that of a child star into the sophisticated style guru she is today. Her Instagram showcases her love for solid, neutral colors, but also proves the star has a knack for styling her looks to appear anything but basic. From childhood star to mature 26-year old actress, follow along as we track Emma Roberts’ style evolution throughout the years:

In one of her earliest debuts, Emma Roberts stepped up in all her pre-teen glory at the premiere of Charlie and the Chocolate Factory in 2005. Her innocence is obviously apparent, but she still appears put together and chic. Although we wouldn’t typically recommend a graphic tee for a film premiere, the hot pink color in contrast with her metallic bag is perfectly youthful; however, we can’t say say the same for her oversized jeans. Her pants definitely could have been tailored to fit Roberts’ petite frame and hemmed rather than dragging sloppily around her feet. 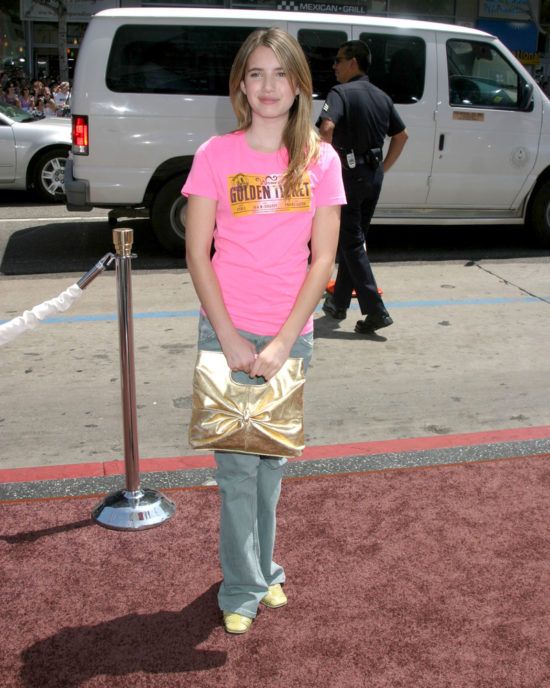 Approximately a year later, Emma Roberts stepped out at the premiere of successful teen film Aquamarine in which she played one of the leading roles. Her dress was sweet and appropriate for her age, but we can’t label this a remarkable style moment by any means. She played it safe with the knee-length dress, ringlet curls and perfectly coordinating sandals, but it’s very clear that her signature style has yet to evolve. 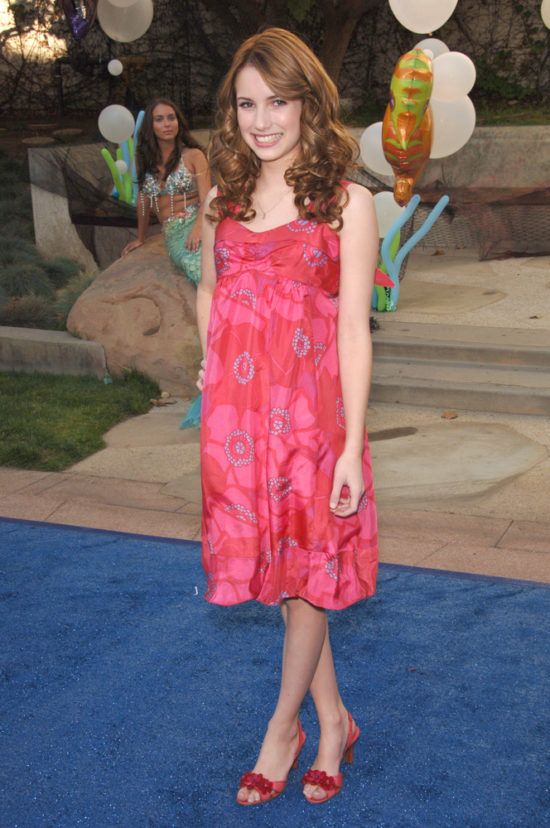 The next year, Roberts took the stage as Nancy Drew in her leading role on the big screen. Yet again, we see her in a safe and sweet knee-length dress, but it’s apparent the star is slowly maturing and becoming increasingly demure with her style. The contrast shade of black in comparison to her fuchsia pink dress from the year earlier is a much more mature and timeless color decision. The dress also featured mesh-neckline detail that is quite sophisticated looking. Despite all the mature updates to her sense of style, the bubble-shape of the dress still exudes youthfulness. 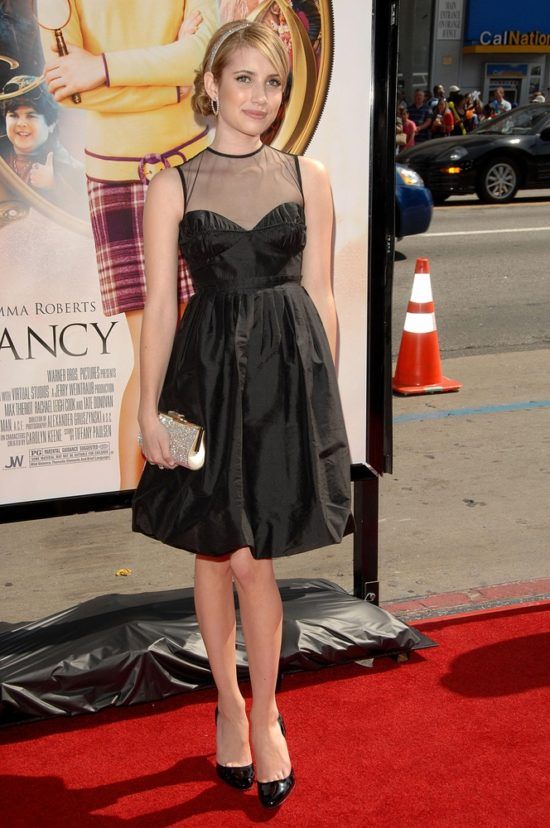 Roberts stepped out a year later at the premiere of The Curious Case of Benjamin Button donning a similar dark color palette and fresh raven-colored hair. Her dress was a rich shade of navy and featured flattering texture and fringe in all the right places. Although we love how polished she looks, the lace mesh around her neck seems excessive on top of the already detailed design. Her fair complexion also seems washed out with the combination of dark hair and dark dress. 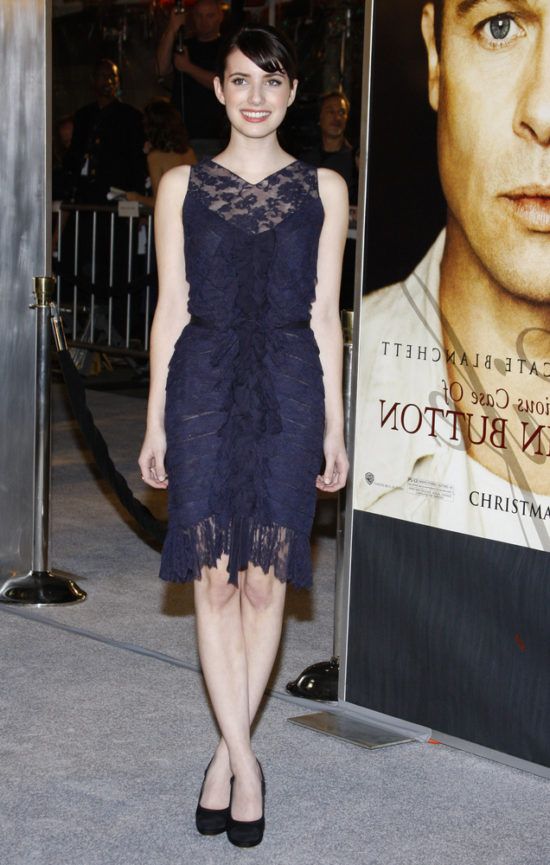 Staying true to the dark hair color, Roberts appeared at the Teen Choice awards wearing a white mini dress with heavy neck embellishment. The dress was definitely a lot more risque than her previous knee-skimming dresses, but this look proved that Roberts was undeniably growing up, and in turn, growing into her style. The bold black neck detailing paired with the edgy moto boots definitely gave Emma a rocker edge onto the feminine body-hugging dress 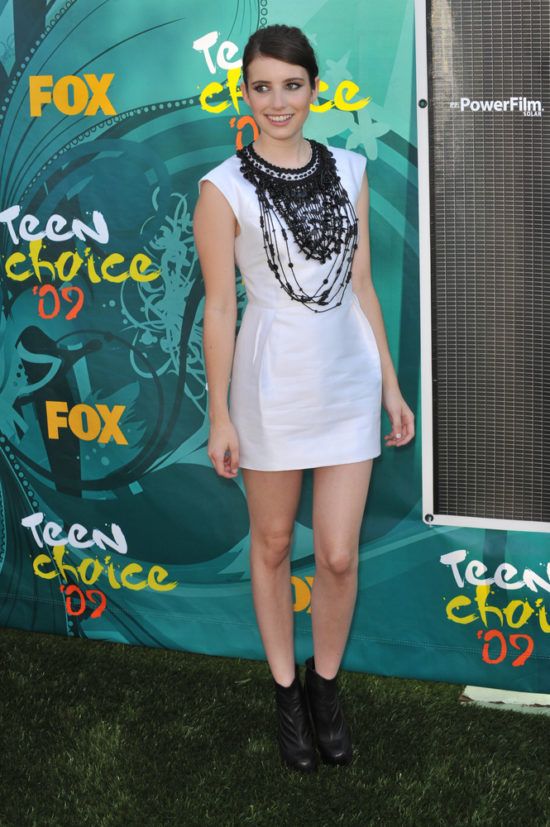 Roberts stepped out a the Teen Vogue Young Hollywood party looking polished as ever in a muted lavender floor-length gown. The 19-year old’s look was revealing yet still modest and featured a simple plunging neckline and dramatic cap sleeve detailing. The smoked out purple shade flattered Roberts’ porcelain complexion and dark locks flawlessly. This was definitely one of Roberts’ transitioning moments into the fashionista we know her as today and she appeared sophisticated yet glamorous in this fabulous style moment. 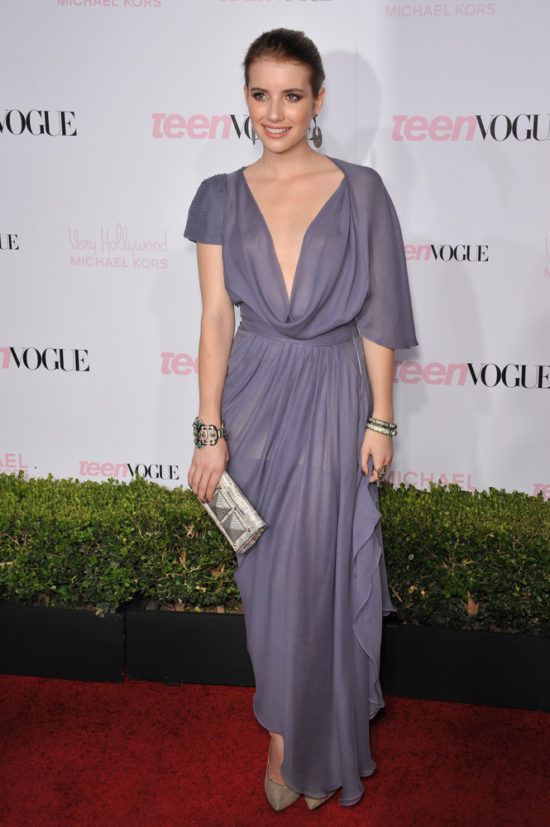 In 2013 Roberts appeared at the Elton John Academy Awards party donning a mature Oscar De La Renta wispy gown. The shimmering fishtail gown was super intricate and stunning, but the shape and color scheme seemed slightly outdated. We loved the bold embellishments and sheer detailing, but we feel the dress overwhelmed the petite star and a simple print in a basic or muted pattern would have been more beneficial. 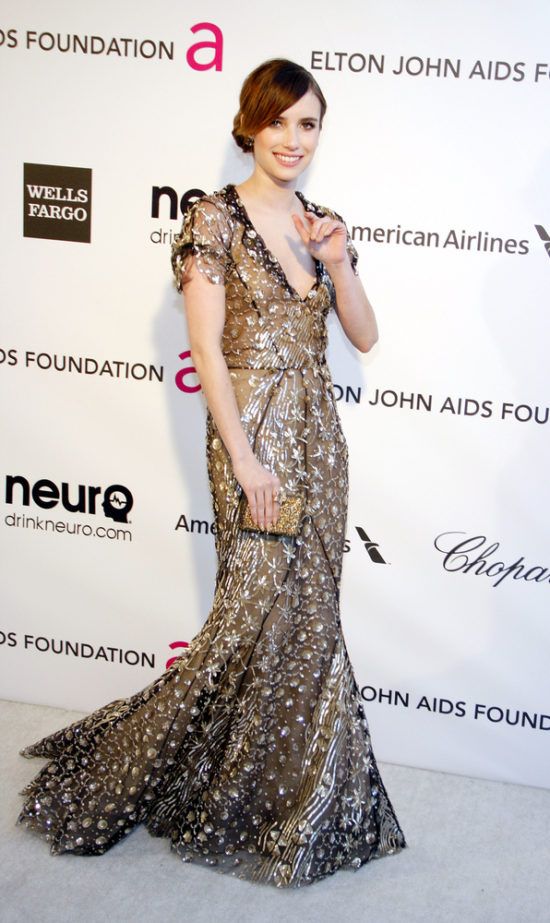 It was clear that Emma Roberts discovered her signature style when she stepped out at the Golden Globe awards in 2015 in this eye-catching yet simple black gown. The mermaid-style Lanvin dress hugged her petite frame perfectly and the off-the shoulder detailing and scooped neckline added a feminine twist to the elegant look. The sky-blue statement earrings she paired with the look definitely stood out with her hair slicked back and the color contrast against the black dress. 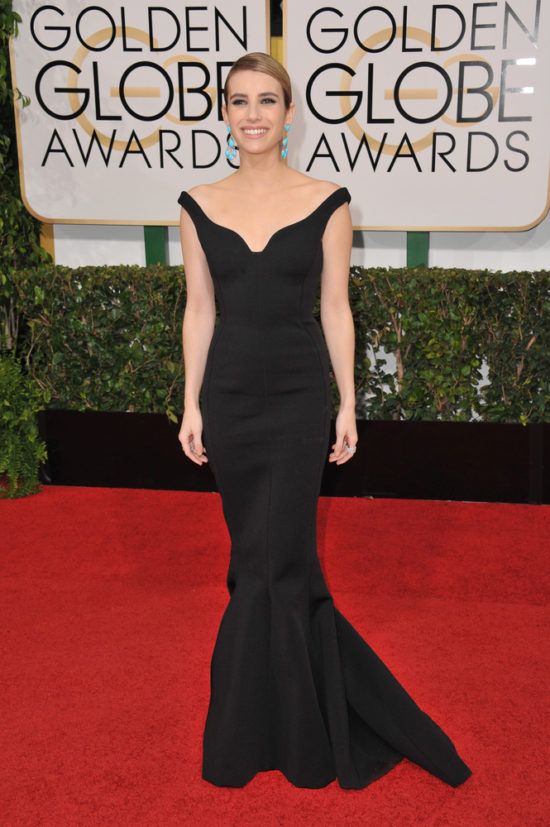 Emma Roberts exuded old Hollywood glamour with the pale pink Jenny Packham dress she donned at the 2015 Emmy Awards show. The custom-made gown featured a dramatic plunging neckline alongside a delicate belt and sparkling sun broach embellishment. The skirt of the dress was full and flowy without overwhelming her slim figure. Her hair was perfectly styled with shoulder sweeping waves and her look was accessorized with dainty necklaces, bracelets and a chic box clutch. When asked how she would describe her look, Emma exclaimed that she was “dripping in diamonds.” 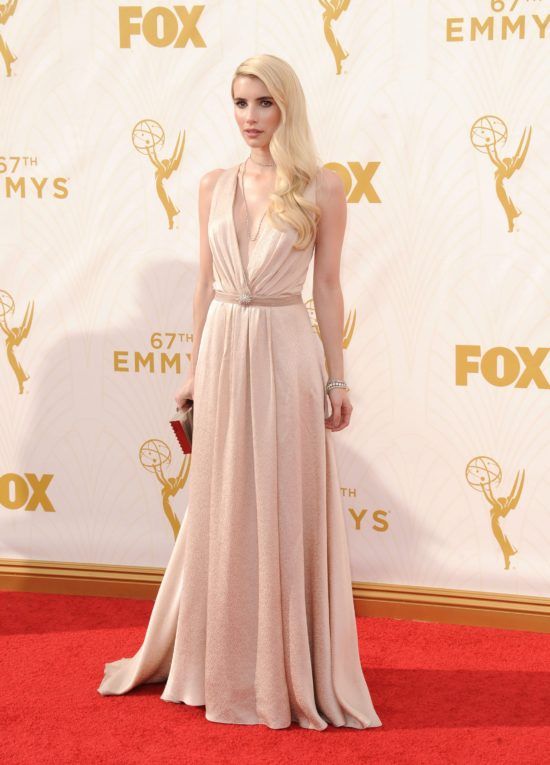 In arguably her most stunning look yet, Emma Roberts stepped out at the most recent MET gala donning a skin-tight cherry red gown designed by Diane Von Furstenberg. The gown featured thin spaghetti straps and delicate lace detailing where the straps meet the gown. The slight V neckline and lightweight silk fabric stunned and the dress flounced out into a flattering train around her knees. She paired the look with a retro pink fur shawl accent and kept her brunette locks flowing. 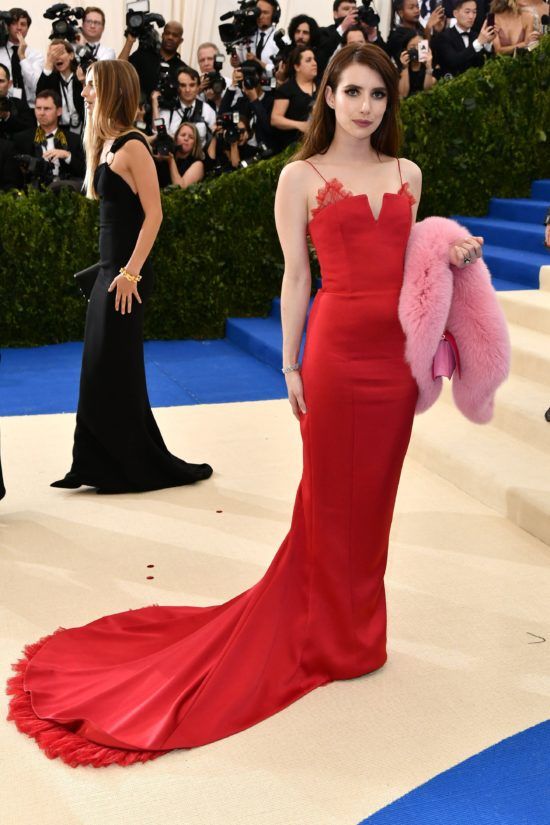 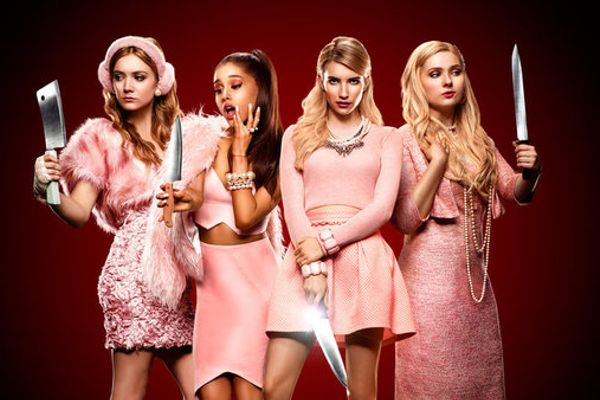