Jennifer Lopez is one of the few celebrities who has stayed true to a consistent sense of style throughout her entire career. From her “Jenny from the Block” days to becoming the style icon she is today, J.Lo never fails to bring glitz and sexiness to every red carpet event she attends. She’s become a glamour icon for her tendency to rock glitter encrusted bodices, sleek and shiny gowns and skin-bearing designs. Lopez isn’t a celebrity that can be overlooked on the red carpet and few gowns caused as much gossip as her plunging emerald Versace gown from the year 2000. Lopez doesn’t allow her age to define her style and even in her late 40s still remains loyal to her signature full-blown glamourista appearance. Whether rocking her emblematic cargo pants and bandana in the ’90s or her classic red carpet glimmering gowns, follow along for Jennifer Lopez’s Fame10 fashion evolution:

In one of her earliest red carpet appearances, Jennifer Lopez stepped out at the premiere of That Old Feeling wearing a knee length bodycon cornflower blue dress. Even in her 1990’s Hollywood appearances J.Lo rocked glitzy sparkling frocks! The glamour icon looked lively and youthful by allowing her natural curls to run wild and wearing minimal makeup. Although we love the simplistic Lopez vibe of this glittering look, we’re unsure about the casual sweater wrapped around her neck which brought a laid back vibe to an otherwise polished look.

In her early red carpet years, J.Lo stayed in a committed relationship with Badgley Mischka dresses and made them an icon. This strapless jet black dress with rhinestone decals definitely was eye catching, but we’re not sure that black compliments J.Lo’s caramel skin tone. We love the glam choker style necklace and sleeked back hair, but the dark colour and billowing shape of the dress drowned Lopez.

In arguably the most buzz worthy red carpet dress of all time, Jennifer Lopez stepped out at the 2000 Grammy Awards show wearing a super deep plunging Versace gown with a sheer tropical-inspired print. The garment instantly gained the attention of worldwide media coverage and has been coined as one of the most iconic dresses Versace ever designed. The dress also is rumored to have been the inspiration behind Google Image Search because at the time the Internet was solely text based. Allegedly, the massive amounts of Internet users trying to find a photo of Lopez’s Grammy dress following the award show inspired Google to create an image search engine.

Jennifer Lopez started a red carpet revolution when she donned this one shoulder mint gown to the 75th Academy Awards. The dress was sleek without being too revealing and featured a glittering hemline reminiscent of a sari. With this look, Lopez brought back the old sparkle that she became known for and left our jaws dropped at her take on simplistic glamour. J.Lo singlehandedly created a fashion legacy with this look and put one shoulder dresses on the map as one of the trendiest styles of the early 2000s.

No one rocks a power suit like pop vixen Jennifer Lopez! The crisp white pantsuit could appear overly professional and stiffing on some stars, but J.Lo’s innate confidence makes this look super alluring! The all white colour scheme of this outfit along with the clean lines of the tailored suit flatter Lopez’s figure and complexion flawlessly. For a finishing touch, J.Lo topped the look off with a classic pair of her signature gold hoop earrings!

Los Angeles Premiere of The Curious Case of Benjamin Button — 2008

In 2008, J.Lo really began to grow into her hallmark style which includes all things slinky, sparkly and sleek. The star rocked this plunging floor length silk gown at the premiere of The Curious Case of Benjamin Button in 2008 and undeniably turned heads. The ivory dress hugged her curves perfectly and featured ruching in all the right places which landed this dress as one of her most memorable. This was definitely a turning point in Lopez’s style evolution and the dresses to come after this all featured a similar sleek, eye-catching design.

Jennifer Lopez stepped out in one of her most sparkly looks to date at the 2009 Golden Globes. The sequin covered Marchesa dress featured another deep plunging neckline and ruching around her waist which flattered all her curves. The bright metallic gold colour really highlighted Lopez’s mocha skin along with the copper toned eye shadow and bronzey glow on her cheeks. Her slicked back bun became a quintessential element of J.Lo’s style and we love how sleeking her hair back allowed her glowing skin and delicate features to be showcased.

J. Lo is the queen of pulling off skin bearing gowns where only a smattering of lace or glitter is covering her in all the right places. This particular Zuhair Murad gown showed off J.Lo’s hourglass figure since the lace perfectly aligned with her curves. The contrast of delicate lace with revealing nude created a radiant effect that is both provocative yet feminine. Her romantic side swept waves and drop style earrings complimented the elegant look flawlessly.

Jennifer Lopez looked fearless and bold when she rocked this a-symmetrical jet black gown at the Academy Awards in 2013. The thigh bearing Anthony Vaccarello gown was an unexpected twist on her typical nude and glitter looks, but she undeniably shined even without all the sparkle. J.Lo’s sharp bone structure and high, glowing cheekbones look stunning when her hair is styled in a slicked back updo. Lopez was an early adopter of the cheekbone highlighting makeup trend with her classic “J-lo Glow,” which became her signature style and even the title for her perfume line “Glow.”

In one of her most dramatic entrances to date, Jennifer Lopez stepped out in a caped Zuhair Murad dress at the 2015 Golden Globes that wowed everyone. Lopez looked stunning in this blush and silver gown that had perfectly placed crystals strung throughout. Her major cleavage, eye catching cape and high-cut slit created an astonishing hourglass silhouette. Her glitter waterfall earrings, smoldering smokey eye and Jimmy Choo clutch channeled Lopez’s inner goddess and, of course, her pulled back hair allowed her shimmering cheekbones to truly shine.

Forty-seven-year old Lopez recently appeared at the NBC Universal Upfront event in New York wearing a peach-colored, off the shoulder Ellie Saab Haute Couture dress. Despite her age, J. Lo continues to prove she is the queen of skin-bearing designs, thigh-high slits and Hollywood glamour and this look is no different. The heavy satin gown features knotting and ruching around the bust to flatter her curves, but also has a sophisticated twist with the long sleeve detailing. She paired the peach garment with a matching Valentino purse, Christian Louboutin platform heels and rings by Narcisa Pheres. In typical J.Lo fashion, she sleeked her hair back and allowed her classic J.Lo glow to truly illuminate and leave us in awe at her glowing beauty! 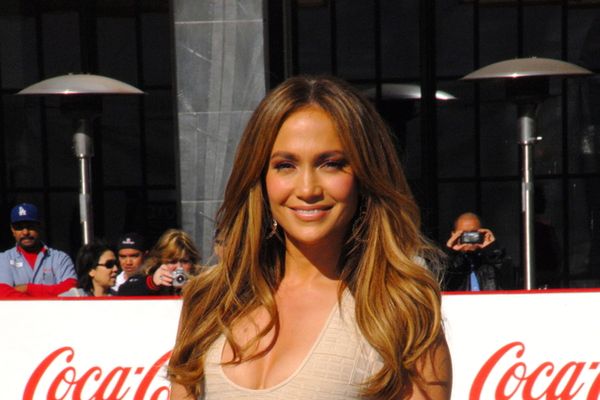