We’ve been watching Kate Middleton for years now. Ever since she made her debut about a decade ago as Prince William’s plus one, we’ve all been a little envious. Not only did she land herself a prince, she also established herself as the most stylish of all the royal girlfriends. She has the sort of fashion sense that’s pretty accessible. She never needed to spend a lot of money to look good and that’s one of things we really like about her. Anyone with a tiny bit of money can dress like Kate. Since we think the Duchess of Cambridge is one of the most stylish women on the planet, we thought we’d feature a fashion evolution on the beautiful brunette!

Kate Middleton looked pretty preppy when she was wandering around Richmond, London back in 2006. She wore a cute beige skirt with a brown sweater over a white blouse. She completed look with a pair of brown suede boots, a pair of brown tights and a little black purse.

She had been dating Prince William for a few years at this point. It was publicly confirmed that these two were an item back in 2004. Since then she had been photographed at various horse races, polo matches and royal engagements alongside her boyfriend. When she wasn’t with William, she was either working for her parents at their party paraphernalia business or was being stalked by the paparazzi. When she received her own security detail in 2006 by the Royalty Protection branch, many assumed that William was going to propose to Kate at any moment; however, it took another four years for him to commit to his university sweetheart.

Kate Middleton was dressed casually when she was seen lugging bags to her car back in 2007. She was wearing a pair of dark blue jeans with a white buttoned top, a black cardigan, an off white blazer and a pair of black suede boots. We miss her old street style. She used to always be photographed wearing these boots – they were one of the staples in her wardrobe.

It was around this time that Prince William broke up with Kate. He was having commitment issues and she was ready to settle down. Prince Charles reportedly told his son that if he wasn’t ready to marry Kate then he should break up with her so that there wouldn’t be another Princess Diana fiasco. It didn’t take long for Will to have second thoughts though. Before the end of the summer was through, these two were back together and more committed than before.

Kate Middleton looked great at The Cheltenham Horse Racing Festival. She rocked a navy trench coat, a black scarf, black tights with a pair of black suede boots, a black fedora and a black purse. This is a really good look on her and we love how she will be wearing more coats like this one in the future. It obviously works on her so why not!

Kate and Prince William were still together in 2008. The breakup was a one-time thing and these two seemed committed to making their relationship work – for the most part. William still, on occasion, acted like a single man. He was spotted this same year at a club flirting with Paris Hilton. We’re pretty sure the heiress was dying to become a princess, but we can’t imagine the royal family allowing William to date a reality TV star who has a sex tape on the market.

Kate Middleton wore a blue knee-length, long-sleeved silk jersey dress by Issa, which matched her blue sapphire engagement ring, to announce her engagement to Prince William. She paired the dress with a pair of black pumps. The dress was a pretty safe choice, but we have come to expect that from her. She likes to play it safe. When it came to her relationship with Prince William, she did the same thing. When they broke up, she gave him the time and space that he needed and showed up at his favorite clubs, looking great and having fun. It didn’t take him long to realize what he was missing.

During their engagement interview, Kate discussed her breakup with William: “Well I think if you do go out with someone for quite a long time you do get to know each other very, very well, you go through the good times, you go through the bad times. I think if you can come out of that stronger and learn things about yourself, it certainly, it’s been a good how many years?” Well played Waity Katie.

Kate Middleton rocked a yellow silk crepe Jenny Packham dress with a pair of nude heels when she hopped off the airplane in Calgary, Alberta, Canada. We personally think the dress is pretty cute; however, wearing something without a billowy skirt would probably have been a better decision. When she was walking along the airstrip, her skirt blew up. The queen reportedly ordered that Kate wear longer hemlines to keep her bits and pieces private.

Some say that exposing her backside is the most interesting thing that Kate has ever done. Some people assume that she’s probably really boring; however, we think it is probably strategic. The less people know about you the better. This is certainly worked in her favor when she was dating William. She was never that interested in attention and the royal family didn’t want to repeat any of the mistakes that were made by Princess Diana.

Kate Middleton donned a knee-length Emilia Wickstead coat and a brown Lock & Co hat for the St. Patrick’s Day festivities. Her style has definitely changed since she became a duchess. She likes to mix high street fashion with designer labels. Because of this, some of the pieces that she wears, everyday people can afford. It also doesn’t hurt that she likes to recycle what she wears. She’ll wear the same dress, shoes and coats to more than one event.

In 2012, Kate landed on Time Magazine’s life of the 100 most influential people. “Kate Middleton, whose ancestors toiled in the coal mines of Durham, was an ordinary college girl on a path to an unremarkable life. Then she met her Prince Charming, became the Duchess of Cambridge and in two years has emerged as a remarkable figure on the world stage. The future Queen is dignified, dutiful and unflappable, with a modest reluctance to steal the spotlight from her husband, Prince William,” wrote Sally Bedell Smith.

The Duchess of Cambridge visited the Hope House Women’s Shelter wearing a grey jersey MaxMara print dress, which featured a V-neck and ruched waist. We like this dress on her. It really highlights her pin-thin frame and her long, lean legs. Around this time, she didn’t have a stylist; however, that didn’t last long. After having George, she realized that she needed to up her game.

She began working with Natasha Archer, a personal assistant at Kensington Palace. She helped Kate Middleton shop and experiment with some more sophisticated looks. “Initially Kate was a reluctant fashion icon, but now she enjoys it. Tash helps source some of the clothes. She shops a lot for Kate online, and calls in hundreds of dresses for Kate to try on,” a source said. “She has persuaded Kate to take some more risks. The hemlines are shorter and Kate’s really pushing the boat out in the fashion stakes.”

Kate Middleton appeared at Bletchley Park wearing this military-inspired Alexander McQueen ensemble. We think this is a pretty cute look on her. Pencil skirts are definitely the right choice for her. They accentuate her long, lean frame, which many of us have come to envy.

The Duchess of Cambridge has always played her cards close to her chest and this became incredibly apparent during the 2014 phone hacking trial. Kate was hacked 155 times by News of the World. They started hacking her phone back in 2005 when they realized that she was becoming a figure of “increasing importance around the royal family.” “There were discussions about her and Prince William marrying, moving in, settling down,” editor Clive Goodman said during the trial. “She started to receive semi-royal status around the Royal Family.” It looks as though News of the World was looking for dirt on Kate, but were unable to find any. She’s always been squeaky clean.

Kate Middleton wore a yellow floral Jenny Packham dress with a pair of nude heels when she and Prince William debuted their second child, Charlotte Elizabeth Diana, to the world. Considering it had only been several hours since she gave birth, we think she looked pretty good. Her skin looked flawless and her hair was perfectly blown out. We love this dress – it is perfect for spring.

Before mother and daughter exited the hospital, Prince William showed up with little Prince George. He looked super stylish in a pair of blue shorts with a white collared shirt and a navy blue sweater. He also had on a pair of blue socks that matched his blue shorts. George has become a style icon, just like his mom. Mothers everywhere want to get their sons the same clothes as the little prince. These same mothers also want to emulate the Duchess’ style. 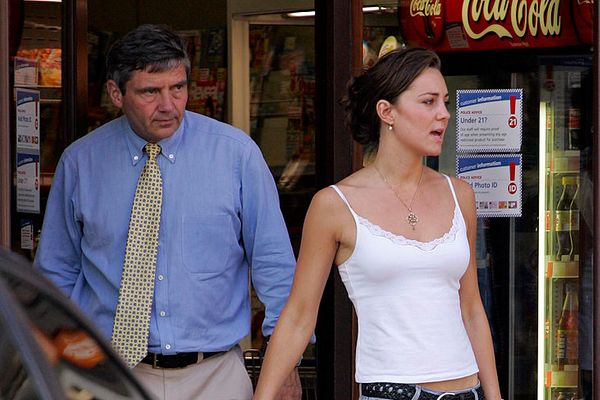