On Sunday Jan. 10, awards season officially kicked off with the 2016 Golden Globes and the stars descended upon the Beverly Hilton Hotel to be recognized and support their peers for their amazing work in film and television over the past year. As always, whether they won an award or not, many stars were recognized for their serious fashion skills on the red carpet. Unlike many other awards shows, there was no common theme and styles varied from off-the-shoulder gowns, to two piece looks and classic glamour. A lot of stars looked absolutely stunning, but these five ladies were the biggest head turners of the night. Check out the five best dressed stars at the 2016 Golden Globe Awards!

Former One Tree Hill star and current Chicago P.D. star Sophia Bush took the “little black dress” to a whole other level with her dazzling black dress by Narciso Rodriguez. Classy, yet still sultry, Bush completed the look with deep red lips, and elegant updo and Martin Katz diamonds. She then made every One Tree Hill fan’s night when she was asked what she was wearing and she answered, “Clothes Over Bros,” the brand her character Brooke Davis started on the show.

Kate Bosworth took a risk that paid off when she arrived in a very embellished and sparkling Dolce & Gabbana gown. The blonde beauty looked amazing in the strapless number infused with shimmering pink discs, and completed the sophisticated and glamorous look with light make-up and diamond earrings.

Olivia Wilde is so gorgeous she could make anything a red carpet hit, but she really rocked it in a custom, deep-red Michael Kors Collection halter dress. The deep-V and long gown style were perfect for the sexy star, and she set off the look with a cream coloured clutch, a Bulgari baubles necklace, simple beach waves and stunning makeup.

Alicia Vikander may have lost out on Best Supporting Actress, but she was a big winner on the red carpet with her gorgeous and classic pleated Louis Vuitton gown. The open back offered just enough sexy for the young star, while the cinched waist showed off her fabulous figure. Vikander showed off the dress with simple jewlery and minimal makeup, made complete with an elegant updo.

Going into awards season, 26-year-old Brie Larson was deemed the new “it” girl, and it seems she has embraced the title by not only dominating with a Best Actress in a Drama award for her work in The Room, but also by dominating the red carpet. Larson looked amazing in an embellished Calvin Klein dress, which showed off her impressive physique with the ab-flaunting cutouts. 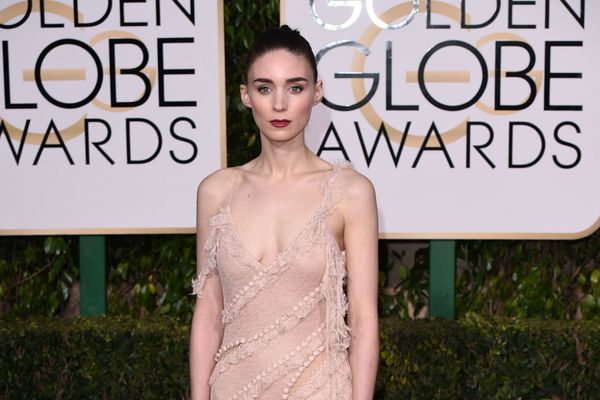