The 2021 awards show season kicked off with the 2021 Golden Globe Awards, but like everything else this year, the event was much different than normal. For the 78th annual Golden Globes, presenters took to the red carpet while nominees stayed at home and attended virtually, but that didn’t stop a lot of them from putting forward their fashion best! While many of these looks didn’t officially hit the red carpet due to safety protocols, check out the fashion hits and misses from the 2021 Golden Globes:

Tina Fey is incredible and brings a lot to the Golden Globes, and while we love her as a host alongside the wonderful Amy Poehler, this just didn’t seem like the right ensemble for the night. Fey’s Versace minidress was definitely sleek and bold, but unfortunately it looked almost like she forgot to put a bottom on with her oversized jacket.

What’s better than one stunning star on the red carpet? Two stunning stars on the red carpet! Longtime Hollywood couple Catherine Zeta-Jones and her husband Michael Douglas took to the awards show together. The actress is a classic beauty so she kept it simple with a classic black Dolce & Gabbana gown. The off-the-shoulder and high slit were paired perfectly with just a little ruching and sparkle to add some dimension. Douglas also looked dapper and classic with a perfect black suit.

Sofia Carson looks great all the time, but her Golden Globes 2021 look wasn’t one of our favorites of the night. The eggplant and pale pink combination on her Giambattista Valli gown along with an oversized bow just did nothing to add to the flair Carson was going for with her outfit. Maybe without the bow and oversized train, it could have been a much different look!

It really is too bad that the awards show had to be virtual this year because Jamie Lee Curtis could have stopped traffic with her look of the night. The beloved actress donned a very chic Alex Perry gown that featured long puff sleeves, a plunging neckline and a beautiful ruching at the waist. To top the look off the bright color had us looking forward to the sunshine of spring ahead.

Ozark‘s Julia Garner has definitely gained attention thanks to her superb acting on the show which earned her her nomination for Best Supporting Actress, but her Golden Globes “red carpet” debut wasn’t a favorite look of the night. Garner went with a black and white Prada gown featuring a very deep V. Although the gown gave her a very statuesque figure and we can always appreciate a deep V look, this one just seemed ill-fitted as it hung off of her.

All dressed up and nowhere to go, which really was a shame for Amanda Seyfried’s gorgeous Golden Globes 2021 look. The actress wore a custom pink Oscar de la Renta gown with a floral shoulder halo. Paired with her $1 million in Forevermark jewles and her subtle makeup and flowing hair, Seyfried looked Old Hollywood glamorous.

Gillian Anderson had a great start to the awards season thanks to her win at the Golden Globes for Best Supporting Actress in a television series in The Crown, but her look wasn’t one of the winning ones of the night. Anderson’s hazy gray/gold Christian Dior gown with a halter top probably could have been saved without the enormous skull emblem at the front stealing all the attention.

Everything about Rosie Perez’s look for the night just worked! From her perfect tousled waves to her subtle yet shimmery makeup and of course the halter-style Christian Siriano dress, it was definitely a hit! Her ensemble featured a peplum waist and a shimmering sequined column-style skirt.

Rosamund Pike was one of the big winner’s of the night thanks to her win as Best Actress in a Musical or Comedy, but unfortunately her fashion choice for the evening wasn’t as successful. The actress wore a bold red gown from Molly Goddard that had everything from tulle to ruffles to velvet and bows and stripes! To make the ensemble more confusing she paired the ballerina-inspired gown with combat boots. We can appreciate a bold fashion statement, but this one was just a lot going on for one piece of clothing.

Regina King has become quite the red carpet showstopper, and having no red carpet definitely didn’t stop her from bringing one of the most incredible looks of the night. The actress and director might not have won for Best Director, but her Louis Vitton gown was an instant winner. Everything from the sparkling detail to the incredible shoulder wrap absolutely worked, and we love everything about it.

Bryce Dallas Howard can usually do no wrong, but her Golden Globes 2021 outfit definitely didn’t hit the mark for the night. The actress donned a shiny ombre Temperley number that just didn’t work. From the turtleneck to the unflattering shape down to the cut at the calves, it just wasn’t a winning look.

It is truly a shame this dress never saw the red carpet because Kaley Cuoco was absolutely stunning in what was the best look of the night. The Flight Attendant actress donned a pale blue/gray strapless Oscar de la Renta ballgown embroidered with silver stars that is truly magical. The Disney princess vibe is major with this dress, and Cuoco has our vote for the next Cinderella. 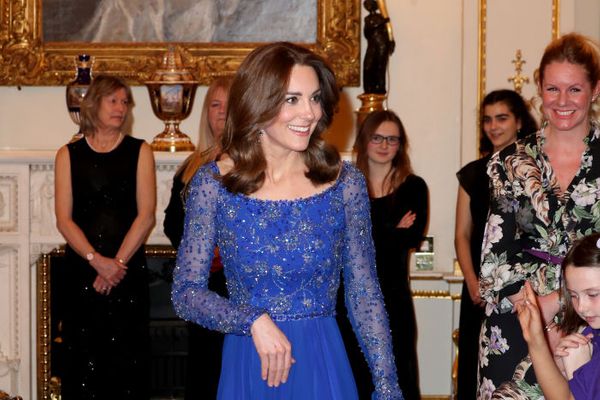