Perhaps one of the most underrated awards shows of the year is the Governors Awards, otherwise known as the honorary Oscar’s. The event features a surprising amount of A-listers — like Emma Stone, Lady Gaga and Hilary Swank — but often flies under the radar. Today, we’re giving this event a deserving mention after seeing some of the striking, head-turning gowns that graced the red carpet. Follow along as we recap all the best (and worst) dressed stars from the 2018 Governors Awards red carpet:

The ever-elegant Lupita Nyong’o stepped onto the Governors Awards red carpet wearing a crisp white dress that gave us serious roaring ’20s flapper-girl vibes. The look featured cold-shoulder sleeves, a deep V-neckline, and stunning fringe sleeves and detailing throughout the skirt. She topped the look with an intricate updo and a punch of purple on her lips.

Rashida Jones is such a beauty that this red dress she wore to the Governors Awards didn’t do her justice! While we love the cape detailing, the overall shape of the dress really drowned her figure. We also aren’t the biggest fans of her sparkling bow detail along the neck of this look.

Black Panther actress Danai Gurira had all eyes on her at the Governors Awards where she stepped out wearing this sleek golden dress that fit her like a glove and showed off her hourglass shape. We love how the gold sequins are multi-dimensional and the floral decals along the bust and hemline really add a unique feel.

Amy Adams stepped out wearing a blush pink, long sleeve dress for this year’s Governors Awards that definitely puzzled us. While we love this soft color against Adams’ porcelain complexion and red hair, the strange sparkly heart detail on the bodice seemed out of place and juvenile.

Sometimes less is best when it comes to red carpet fashion and Felicity Jones definitely proved that with her sleek Governors Awards look. The satin number was perfectly tailored to her body and looked super high-fashion and luxurious. We especially love the halter neckline and contrasting black strap!

While glitter and sequin looks are ideal for this time of year and the holidays, we’re not totally sure how we feel about Emily Blunt’s take on the trend. The crop top and skirt seemed to show a little too much midriff for a classy awards show. Also, the shoulders of the dress seemed to protrude at strange angles which lead us to believe the look was not tailored properly to her body.

Crazy Rich Asians star Gemma Chan looked absolutely gorgeous at this year’s Governors Awards wearing a satin blue dress with an exaggerated sleeve detail. Typically looks like this with bold details are quite risky, but since the shape of the dress is so form-fitting and sleek, a statement shoulder like this really works and gives a fashion-forward feel.

Lady Gaga is known for her bold fashion and theatrical looks. Sometimes this works for her and sometimes it doesn’t, like this interesting black dress she opted for at the Governors Awards. The look was made of a cheap-looking texture that resembled a garbage bag and the shape of the dress really drowned her. Fortunately, her hair and makeup were on point and somewhat compensated for the unfortunate gown!

If Beale Street Could Talk actress Kiki Layne stepped onto the Governors Awards red carpet in a seriously swoon-worthy gown. The magenta number showed off her tiny waist but was also highly detailed and classy with the full, ruffled skirt and high-low hemline.

Rachel Weisz is so stunning that she could seemingly do no wrong on the red carpet, but we have to admit we weren’t huge fans of the look she chose for this year’s Governors Awards. The black number didn’t seem to quite fit her properly and was wrinkled and folded along the bodice. We also aren’t huge fans of the buttons trailing along the front of the gown which made it come across quite casual.

Nicole Kidman was an absolute bombshell on the Governors Awards red carpet where she stepped out wearing this sparkling body-skimming dress in a flattering shade of pale pink. We especially love the petal-sleeve detailing on the shoulders which really made this dress stand out and feel more elevated than a standard glittering gown.

Maggie Gyllenhaal is another Governors Awards attendee who opted for sparkles on the red carpet, but we aren’t sure this was the best choice for her. While we love the subtle silver sparkle against the white fabric on the dress, the cardigan that she draped on top of the look really drowned her figure. We would have much preferred if Gyllenhaal skipped on the sweater and simply wore the dress itself.

This look was undeniably one of Hilary Swank’s best-dressed moments of all-time! The flattering gold strapless dress hugged her curves perfectly and featured intricate detailing throughout. She let her hair fall in loose waves around her shoulders and held a golden clutch in her hand to complete the bombshell look.

Kesha’s look for this year’s Governors Awards was highly disappointing in all honesty! The look reminded us of something hanging on the racks of a children’s store with the pink feathers and rainbow sparkles. If Kesha wanted to do sparkles, we would have much preferred if she opted for a neutral, more modest color.

Of all the looks of this year’s Governors Awards, we have to admit that Emma Stone’s look was our all-time favorite! The midnight blue dress featured subtle sparkle along the bust and hemline, along with a metallic foil detail on the dainty sleeves which was totally unique and eye-catching. 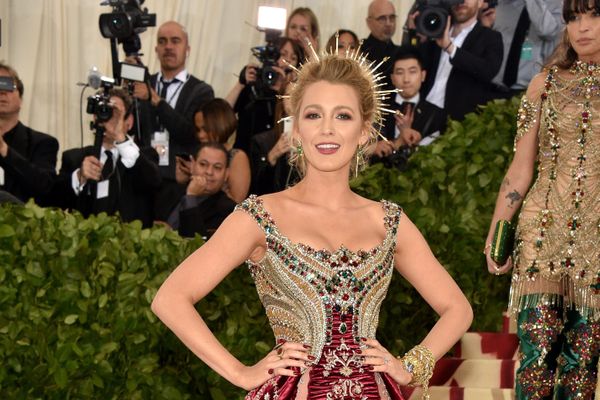 Most Iconic Red Carpet Dresses Of 2018