There’s no denying how influential Kylie Jenner has been in the fashion world. At such a young age, she’s already achieved billionaire status with her hugely popular reality TV show and a successful cosmetics company. As a celebrity with one of the biggest social media followings in the world, follow along as we rank all of Kylie Jenner’s most memorable fashion hits and misses, and be sure to cast your vote as well!

We love this little gold dress that Kylie Jenner wore in August 2015 for the MTV Video Music Awards! The detailing on the dress is seriously gorgeous and her shoes were the perfect choice to complete the look. We also are huge fans of the thick black wig and heavy eyeliner she wore with this look which really gave off a Cleopatra-inspired vibe. Be sure to vote below if you agree! 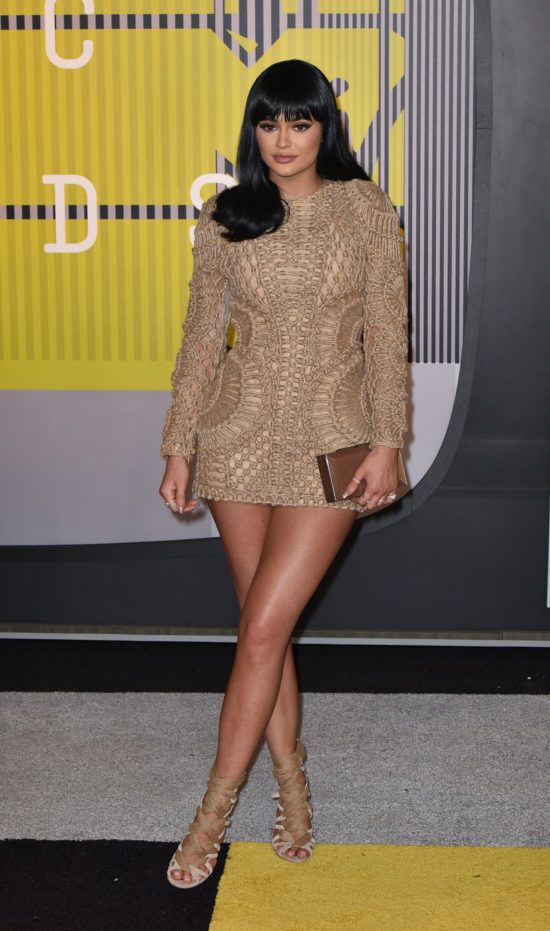 One of Kylie’s more questionable looks was when she stepped out in Montreal for her 18th birthday celebration. The dress she wore for the occasion definitely wasn’t a favorite of ours! There was simply too much going on from the dramatic pattern to all the overwhelming colors. 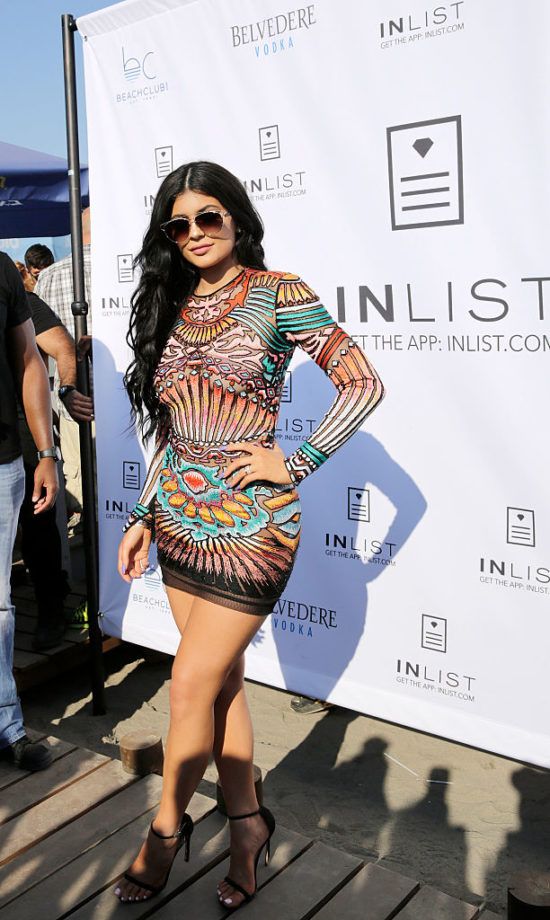 We absolutely love this sleek black look that Kylie wore while attending a GQ event in December 2015. The dress was very flattering and the rounded cutouts did wonders to further emphasize her hourglass figure. It showed enough skin to be sexy without being overly revealing! Be sure to vote below if you agree. 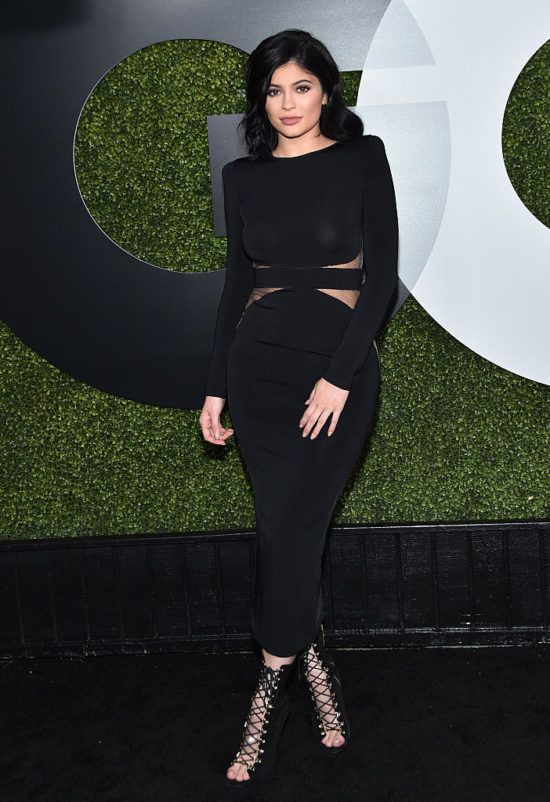 In September 2016 Kylie was spotted attending the Alexander Wang Spring Summer 2017 Fashion Show in New York. For the event, she wore a silver fringe dress with black rope detailing. We have to admit we weren’t the biggest fans of this dress and it felt a little too costume-like and theatrical! 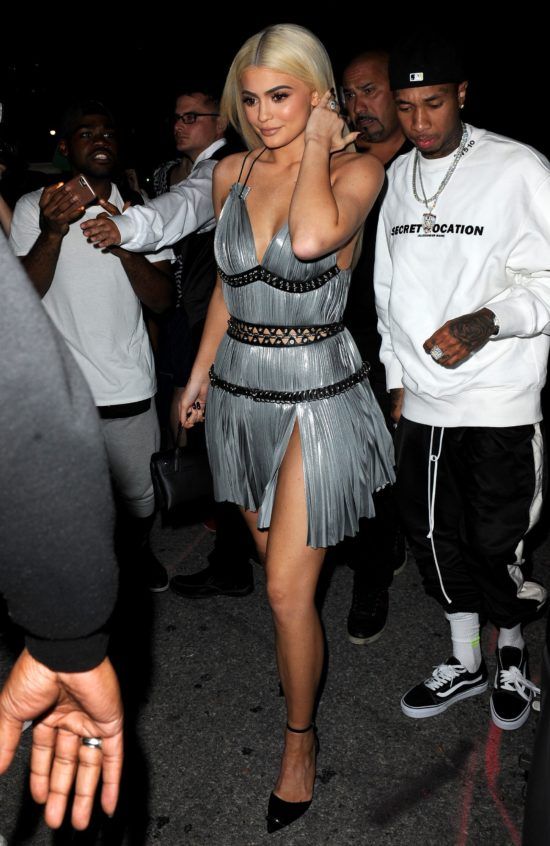 Kylie Jenner absolutely dazzled at the 2016 Met Gala where she wore this silver sparkling look to match the theme of “Manus x Machina: Fashion in an Age of Technology.” The look perfectly reflected the tech-focussed theme with all the heavy metal and silver beading but was still totally glamorous. 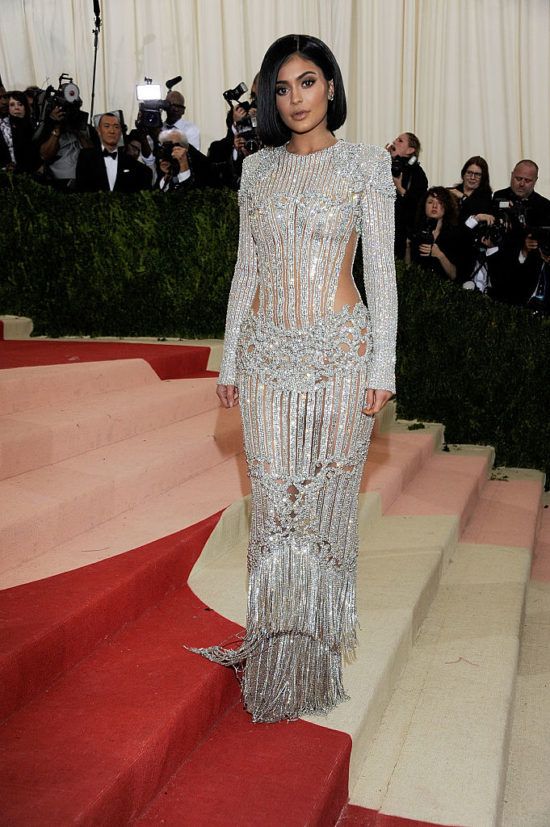 During Kylie’s earlier years in the spotlight, she often opted for quite simple looks like this printed skirt and crop top. While we can appreciate her decision to dress in an understated, modest way, this isn’t an outfit that stands out or is memorable in any way and is admittedly, a little dull. 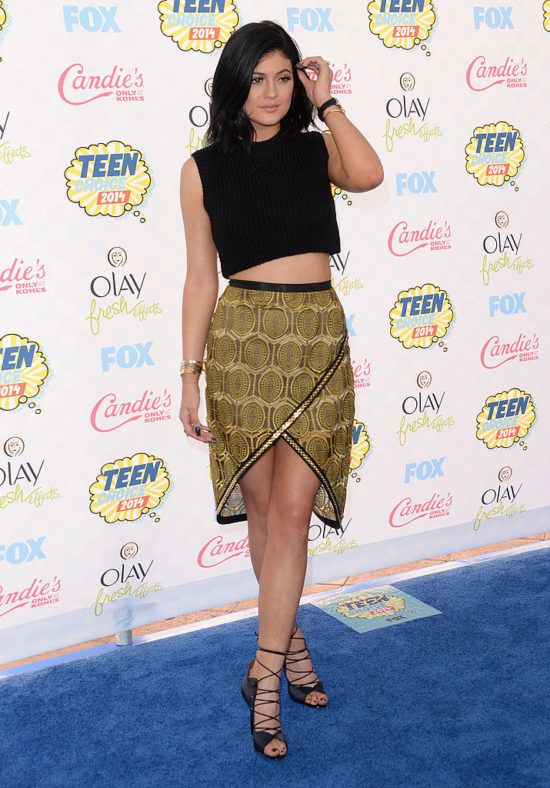 One of Kylie’s most elegant looks of all time is when she wore this sleek champagne dress to attend the 2nd Annual Diamond Ball. The look hugged her curves perfectly and had a huge glamour factor about it with the long train and satin detailing on the bodice. 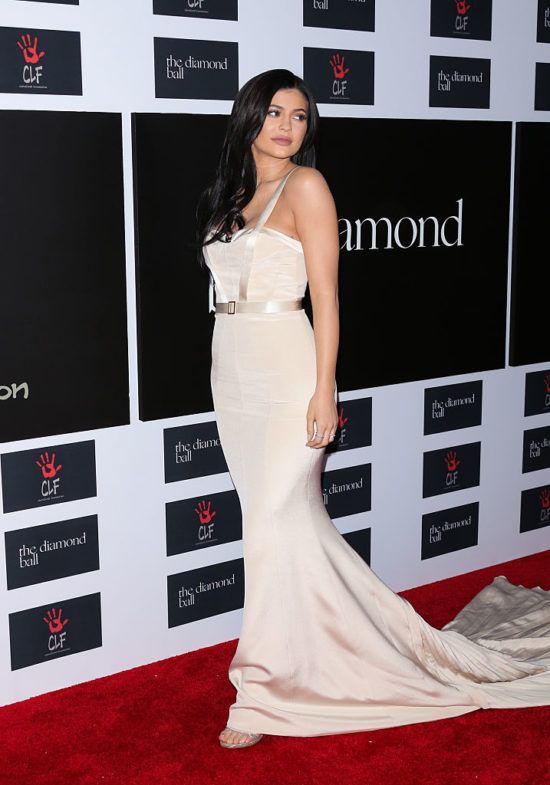 Kylie Jenner stepped out at the 2015 Billboard Music Awards wearing a long sleeve striped mini dress that featured a chunky gold belt cinching in her waist. While the shape of this dress does wonders for flattering her hourglass figure, it’s definitely not a favorite look of ours, especially when paired with such dramatic shoes. Since the dress makes such a statement, we would have loved to see her opt for gold strappy sandals rather than a shoe that competes with the dress. 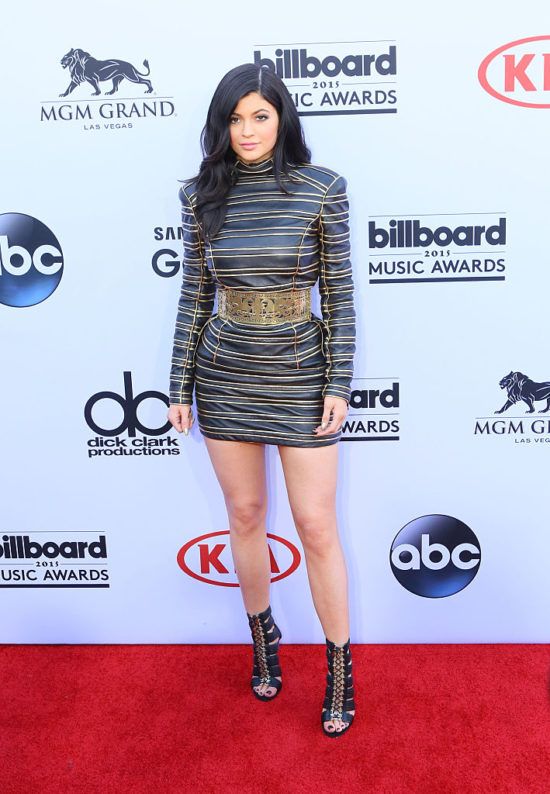 Kylie totally stole the show when she stepped out at the NIP+FAB Photo Call in December 2015. We love the ’60s vibe of this black and white dress! The cutout showed the perfect amount of skin to be a little sultry but still appeared totally chic and modest. The caged shoes were the perfect choice to complement and add dimension to the simple monochrome dress. 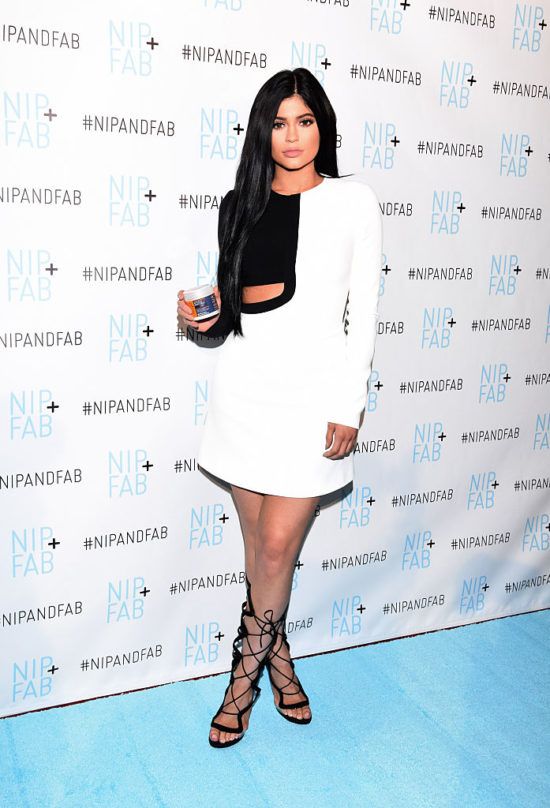 Another look of Kylie’s we didn’t totally love was the Balmain dress she wore in October 2015 to attend a collaboration event between Balmain and H&M. While the dress itself is gorgeous and a work of art in itself, we don’t love her choice of over-the-knee boots that seemed to overwhelm the dress. We would have loved to see her wear the intricate dress with simple, minimalist style heels. 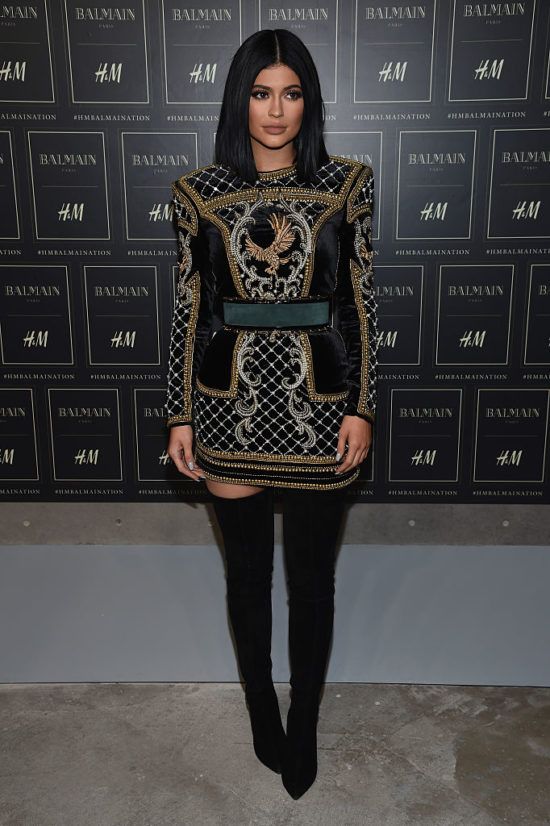 We love this white crochet look that Kylie wore in October 2015 to an event in Los Angeles! The white really pops against her dark hair and all the intricate detailing makes this dress stand out amid many of her more simple fashion moments. 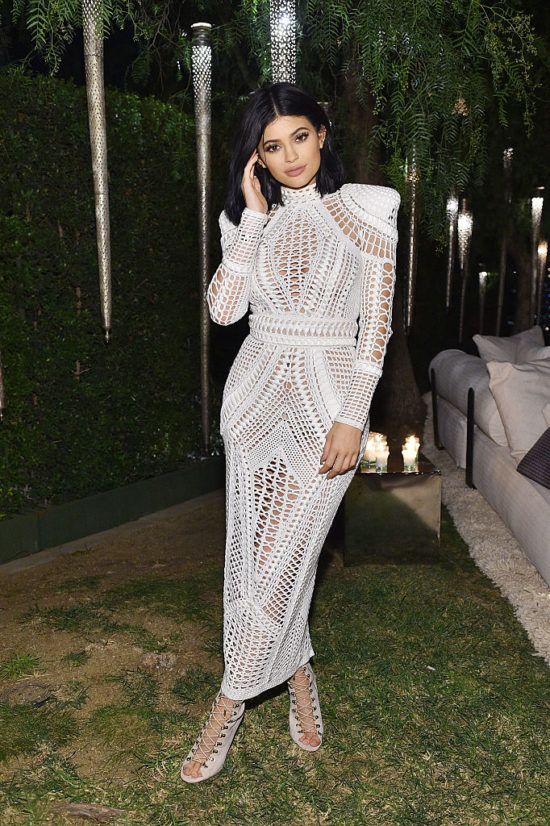 (Photo by Stefanie Keenan/Getty Images for Beats by Dre)

One of our least favorite looks of Kylie’s is this casual outfit she wore in February 2017 to the Alexander Wang fashion show. The oversized plaid coat seemed super casual and out of place for a fashion week outfit! 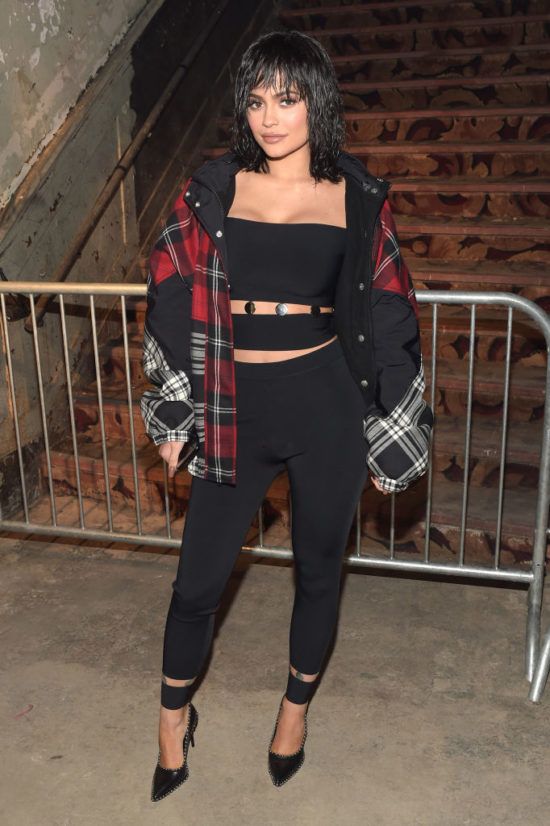 Kylie had all eyes on her when she stepped out for a GQ event in February 2015. She channeled total mermaid vibes with her sweeping silver beaded dress and long beachy waves! 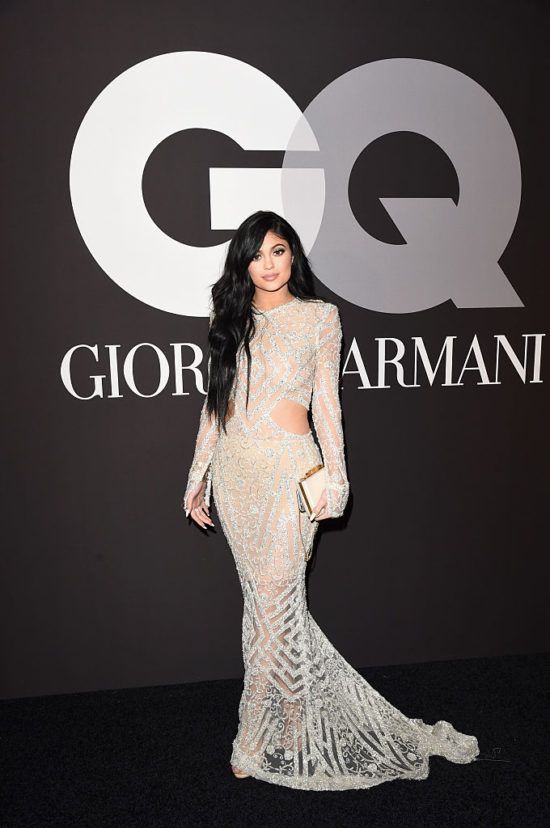 We’re definitely huge fans of a good satin dress, but this specific number didn’t seem fit Kylie properly! The dress wrinkled and bunched in all the wrong places and wasn’t the most flattering. When it comes to satin and silk, having the garment fit perfectly is key since all the wrinkles and creases are that much more obvious. 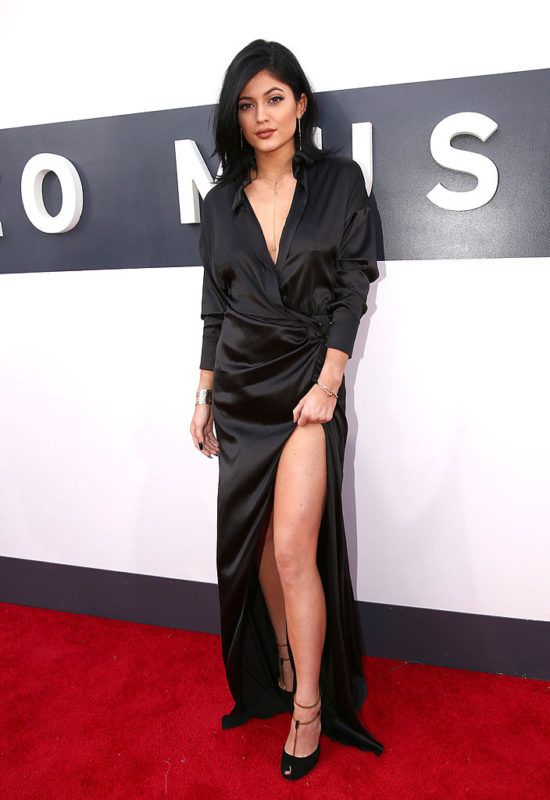 This sleek and simple two-piece set is a classic Kylie Jenner look that we absolutely love! The set is classic and chic but still a little sexy. She added her unique touch of personality by pairing the look with a long seafoam green wig which totally completed the look and added a signature Kylie Jenner flair. 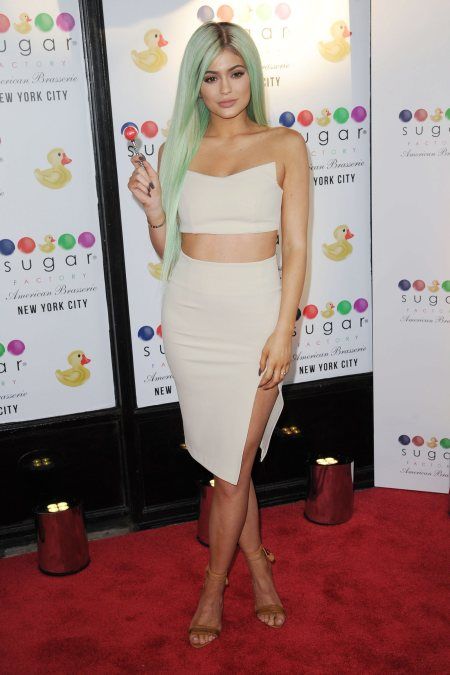 We can’t say we were huge fans of this denim-on-denim look that Kylie wore in September 2016 during New York fashion week. The casual ripped denim and headscarf felt much better suited for a weekend look or a day at the beach than for a fashion show! 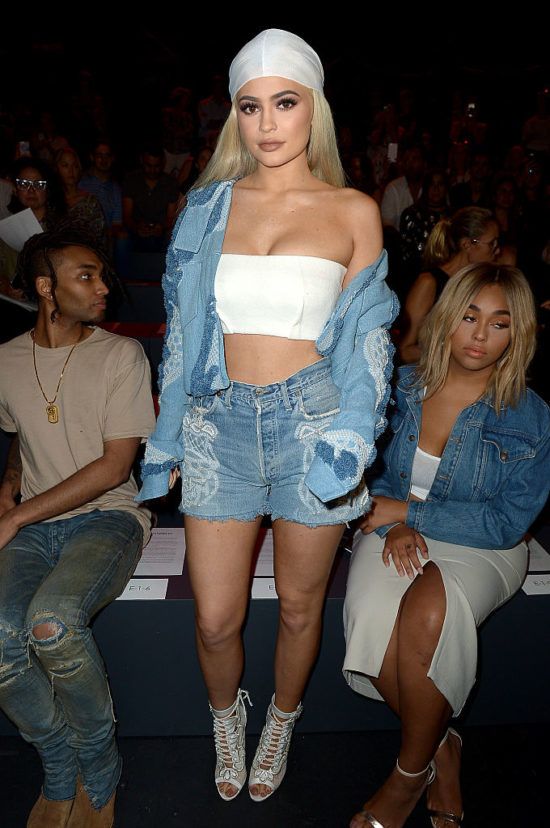 Kylie made heads turn when she stepped out in July 2015 for the EPSYS wearing this head-to-toe gold sequin gown! A look like this definitely couldn’t be pulled off by everyone, but Kylie’s dark features and hourglass figure was the perfect match for such a glitzy, eye-catching ensemble. 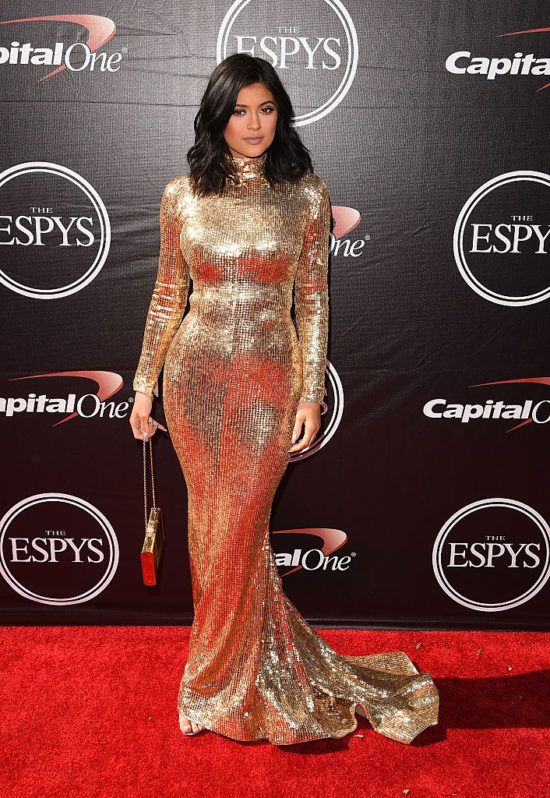 On the other hand, this glitzy look that Kylie wore in January 2016 definitely wasn’t one of her better looks. The combination of the wispy tulle and sparkles felt very inconsistent with her personal style which typically consists of sleek, chic and sophisticated shapes. 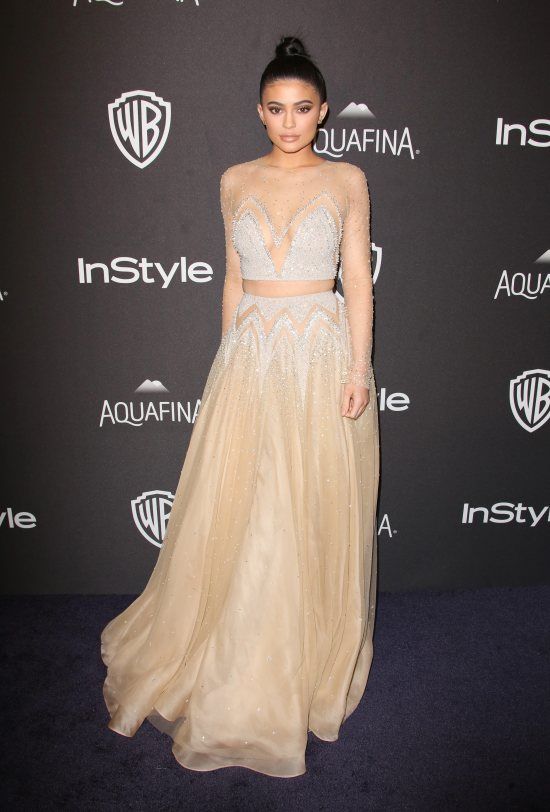 Kylie Jenner was a total bombshell when she stepped out in February 2019 wearing this sultry red dress. This satin texture looks super luxe and flattering on her! We especially love the ruffled hip detail and thigh-high slit which really bring the glam factor. 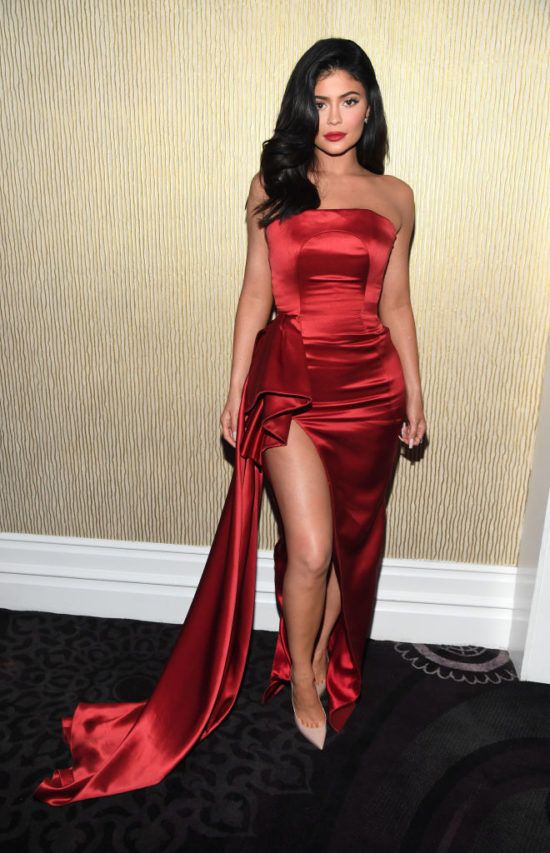 (Photo by Kevin Mazur/Getty Images for The Recording Academy)

Kylie stepped out at the 2018 Met Gala wearing a sleek black dress with zipper detailing on the side, but we can’t help but wish she had opted for something more dramatic and captivating for her big Met Gala debut. The black gown was relatively simple for a Met Gala look and the skinny sunglasses seemed a little unnecessary. 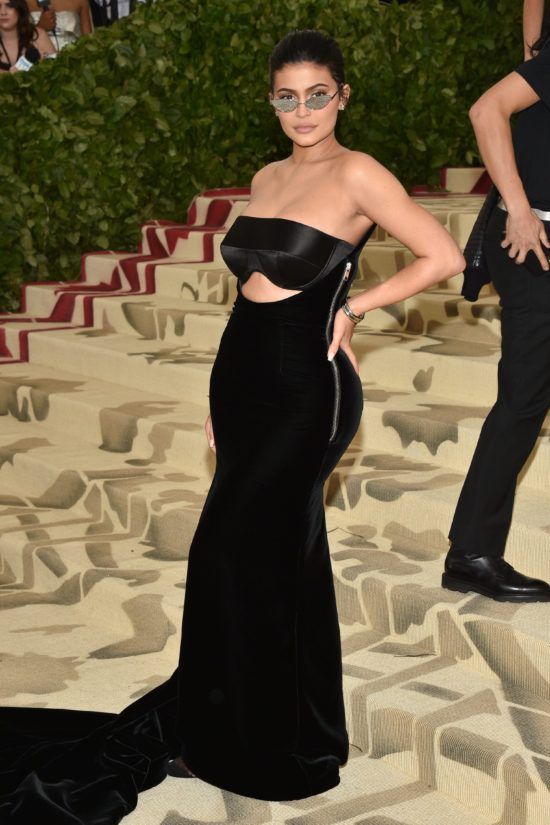 On the other hand, one of Kylie’s best Met Gala looks of all time is this champagne dress she wore in 2017. The intricate look consisting of mesh, golden beading, and delicate fringe was both elegant and eye-catching. 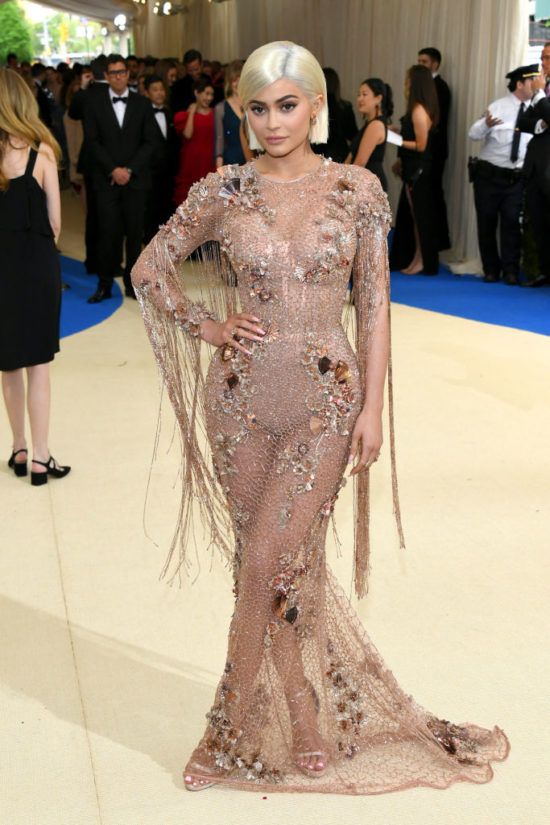 We were definitely quite confused with this purple ruffled look that Kylie wore in January 2017 to Marie Claire’s Image Maker Awards. From the bright color to the eclectic tiered ruffles, this was without a doubt one of her least flattering looks of all time. 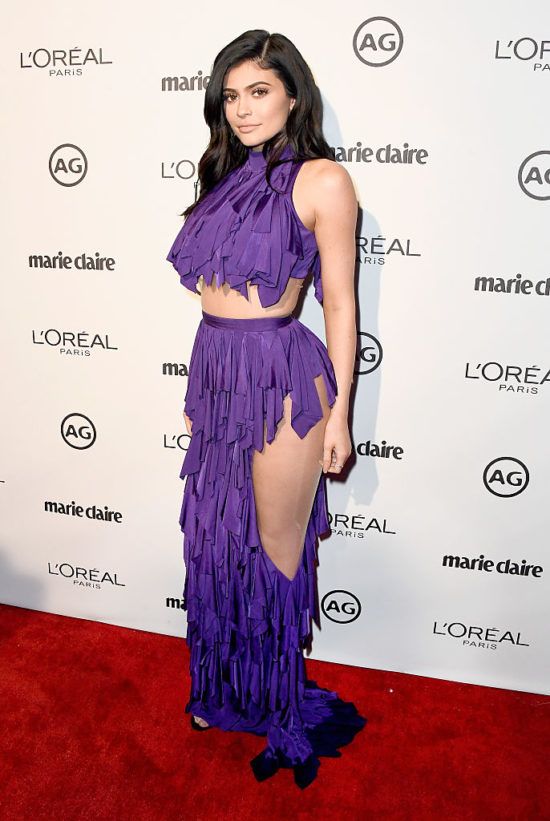 Kylie showed her professional side when she stepped out at the 2018 VMA’s wearing this sophisticated white blazer dress with a bedazzled belt buckle. We love to see this polished and refined side of Kylie! 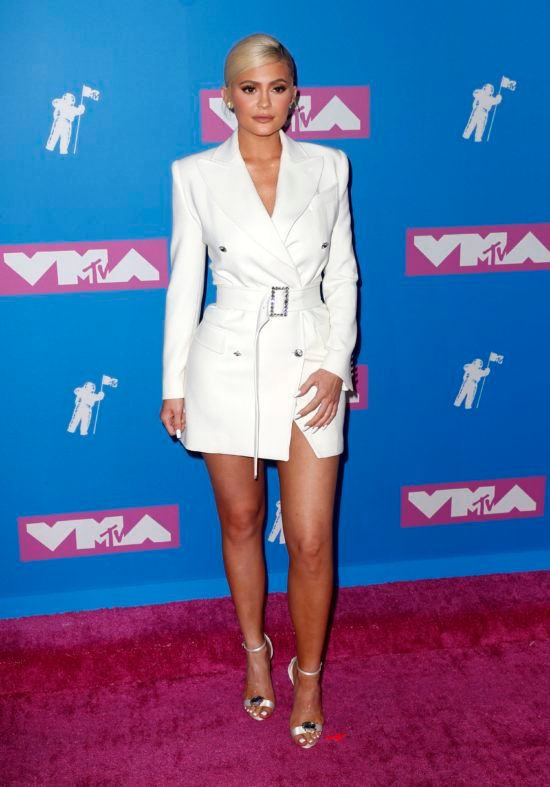 One of Kylie’s biggest fashion misses was this pink structured look she wore in February 2019 to the Grammys. From the bizarre sleeves to the oversized pants, this look was certainly far from flattering or true to her personal style in any way. 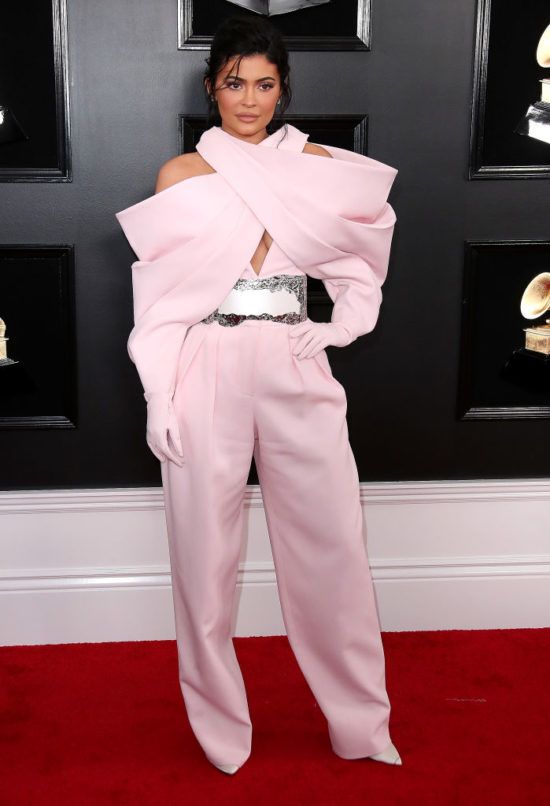 Kylie Jenner was a total bombshell at the 2019 Met Gala and we were blown away when she stepped out in this beautiful lilac creation! From the feathered sleeves to the violet wig, this look was everything we could have asked for and more. 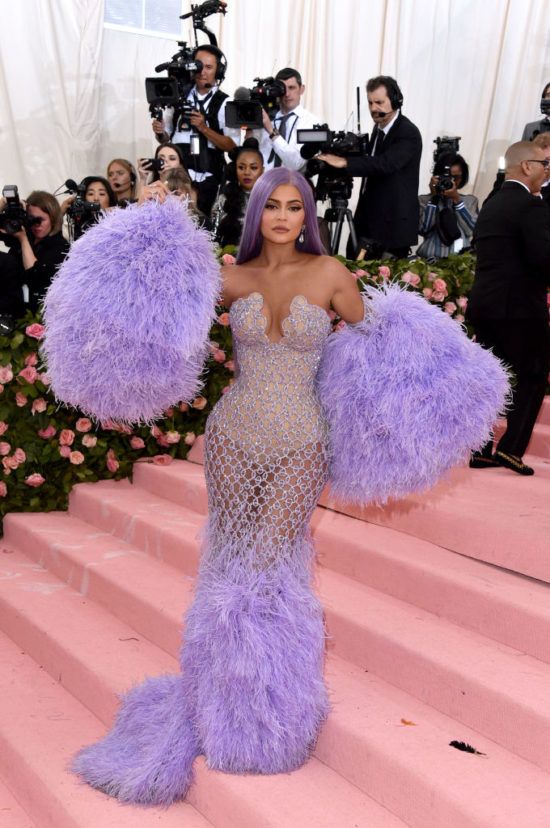 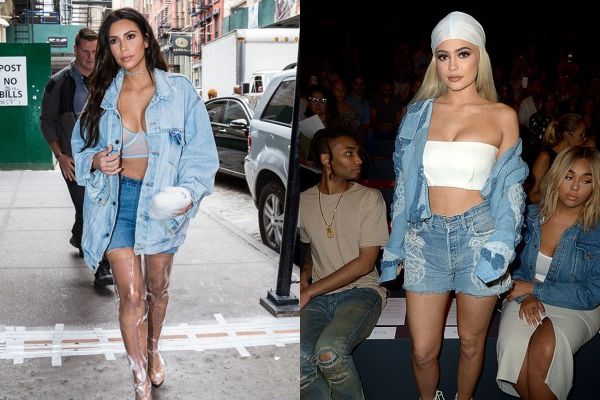