The Met Gala is undeniably the most experimental and theatrical red carpet of the entire year. The Met Gala red carpet is filled with unique dresses that are intended to be works of art, so it’s interesting when two celebs step out wearing something similar. Today we’re recounting all the celebs from the 2019 Met Gala who wore something similar, and most importantly, who wore it best! Follow along for our Met Gala fashion face-off and be sure to vote for your favorite look!

20. Battle of the Billowing Blue Look

Billowing, oversized dresses were a huge theme at the Met Gala in 2019. While Lili Reinhart opted for a blue Salvatore Ferragamo look that consisted of shorts and a billowing train, Swanepoel opted for a sleek glitter dress which consisted of a full taffeta skirt. Which blue, billowing look do you prefer — Lili’s or Candice’s? 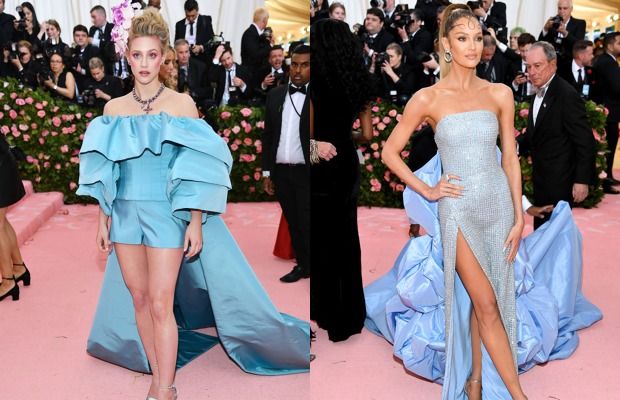 Photo by Dimitrios Kambouris/Getty Images for The Met Museum/Vogue

19. Battle of the Magenta Look

Imaan Hammam opted for a bright pink ruffled dress for the 2019 Met Gala that had a few parallels to Kacey Musgrave’s leather neon pink look inspired by Barbie. Whose did you prefer? Imaan’s ruffled number or Kacey’s leather look? 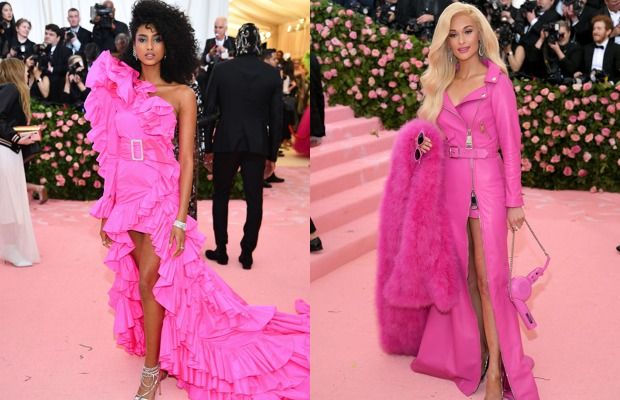 18. Battle of the Colorful Jewels

Both Gwen Stefani and Bella Hadid were dressed by Moschino for this year’s Met Gala. It’s clear the designer had a common aesthetic in mind for the event based on the colorful jewels incorporated in both Stefani and Hadid’s looks. While Stefani opted for a white bejeweled mini dress paired with a fluffy overcoat, Hadid opted for a black look with cutouts and layered jewel bracelets up her sleeves. Which look do you prefer? 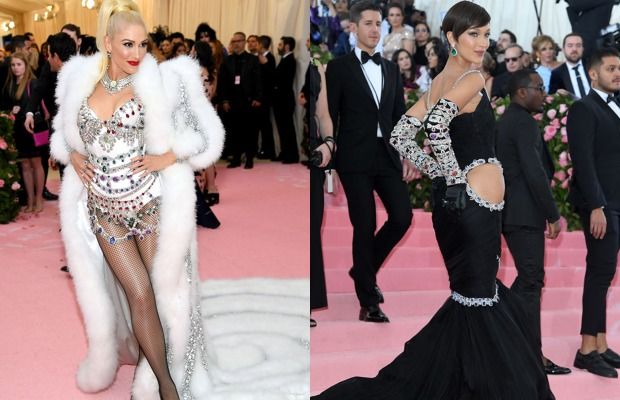 17. Battle of the Pink Satin Look

Both Deepika Padukone and Nicki Minaj opted for glittering pink satin looks for their Met Gala attire this year. While Padukone opted for a full-length Princess skirt covered in jewels, Minaj opted for a shorter high-low style with lace-up heels and a billowing train. Whose pink look do you prefer? 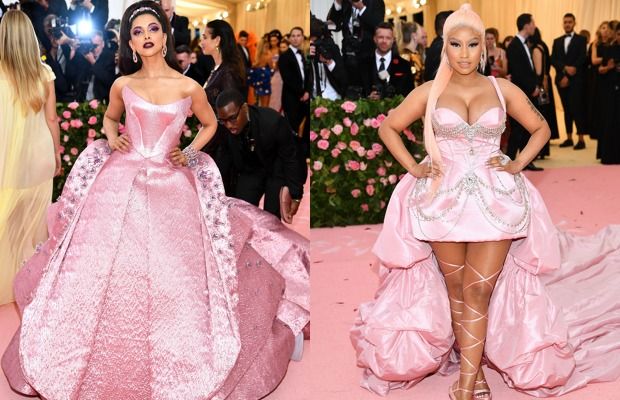 Photo by Dimitrios Kambouris/Getty Images for The Met Museum/Vogue

There’s no better red carpet than the Met Gala to channel your inner fairy! While Riverdale star Madelaine Petsch rocked a delicate aqua look with wings, Kris Jenner wore something a little darker with sharp shoulders that resembled angel wings. Whose look do you prefer? 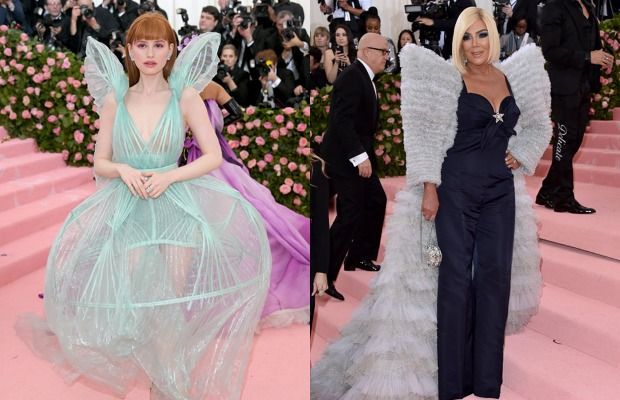 There’s no better place than the Met Gala to opt for an oversized bow, and we saw many of them on the Met Gala red carpet! While Elizabeth Debicki opted for a pink taffeta dress with a large bow on the chest, Carey Mulligan opted for something slightly more toned down with color blocking and a smaller bow on the chest. Whose look do you prefer — Elizabeth’s or Carey’s? 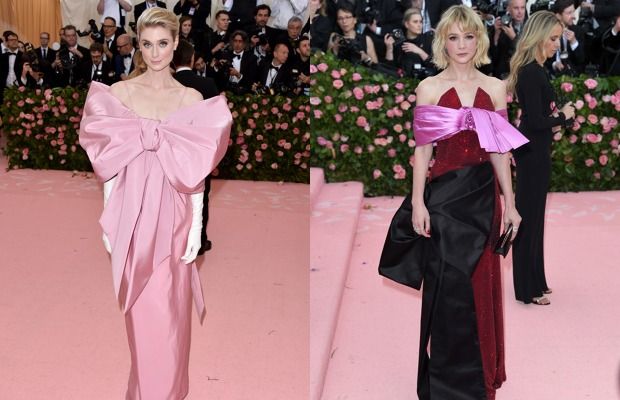 14. Battle of the Silver Belted Look

Emma Stone and Chloe Grace Moretz were both dressed by Louis Vuitton for the Met Gala this year, so it’s not surprising that they ended up rocking similar looks. While Emma donned a full-length glitter jumpsuit with a gold accented belt, Chloe Grace opted for a minidress with sharp, sculptural lapels. Which look do you prefer? 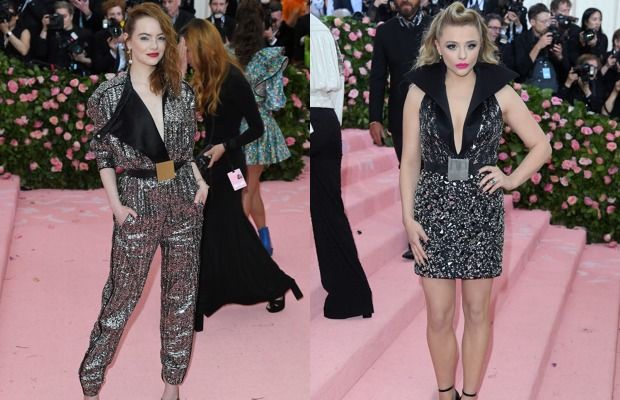 13. Battle of the Silver Beading 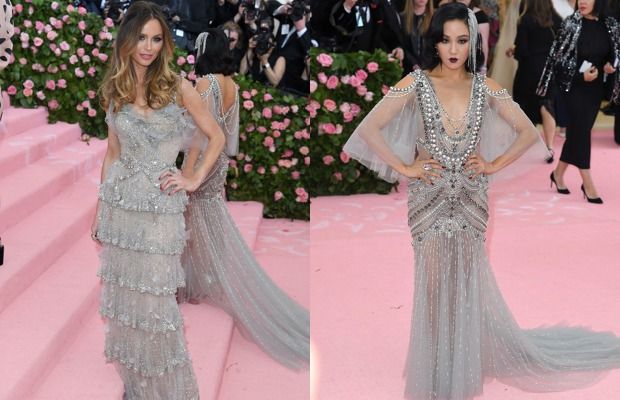 12. Battle of the Purple Dress

Dakota Johnson stepped out at this year’s Met Gala wearing a custom glittering purple dress designed by Gucci. The look featured a bleeding heart decal in the center and sheer sleeves. She topped the look with a bold silver crown. Katie Holmes stepped out at this year’s Met Gala also opting for purple, but in a darker shade. Her dress was designed by Zac Posen and featured 3D printed palm fronds on the collar. Who wore purple better, Dakota or Katie? 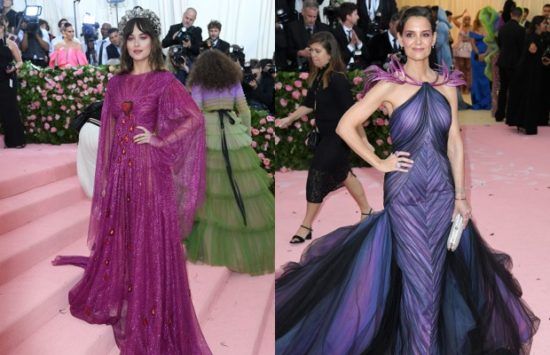 11. Battle of the Long Trains

Lady Gaga and Cardi B both love the shock factor when they step out onto the red carpet, so we had big expectations for them at this year’s Met Gala. Luckily, neither disappointed. Lady Gaga stepped out completing four outfit changes, with her first fuschia look being quite notable due to its long train. Cardi B stepped out with a dramatic look of her own, in a deep ruby red color, which featured a headpiece, dramatic sleeves, and a full billowing skirt. Who pulled off the long train better, Gaga or Cardi? 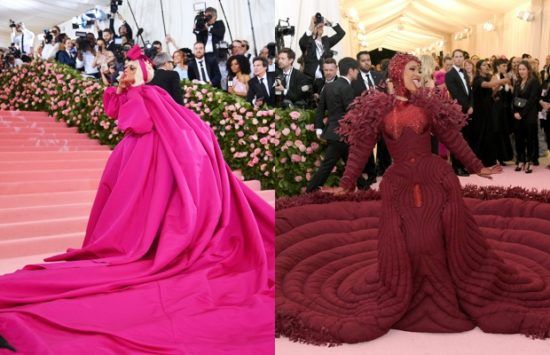 10. Battle of the Yellow Dress

Riverdale star Camila Mendes stepped out for this year’s Met Gala in a bright yellow gown covered in feathers with a blue sash. The night marked Mendes’ first time attending the Met Gala and she opted to work with designer Prabal Gurung. Mendes wasn’t the only star who wore yellow at the 2019 Met Gala, however! Serena Williams stepped out wearing a dramatic yellow gown that was a little more neon than Camilla’s. Her look was designed by Atelier Versace and featured 3D magenta floral embellishment throughout. Which yellow dress do you prefer — Camilla or Serena’s? 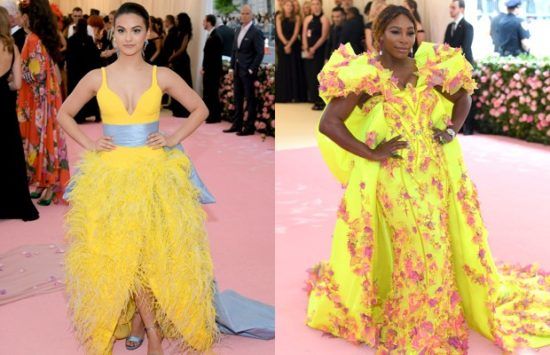 9. Battle of the Tulle Dress

Tulle is the perfect dramatic trend to wear for the Met Gala, and clearly, both Lana Condor and Emma Roberts understand that! The first time Met Gala attendee Condor opted for a heavy pale pink look designed by Giambattista Valli that featured a miniskirt with a dramatic train and sleeves. Emma Roberts stepped out the same evening wearing a dramatic tulle look of her own in a deeper shade of pink. Her look was also designed by Giambattista Valli and featured bold tiered ruffles trailing the entire way down the skirt. Who wore tulle better — Lana or Emma? 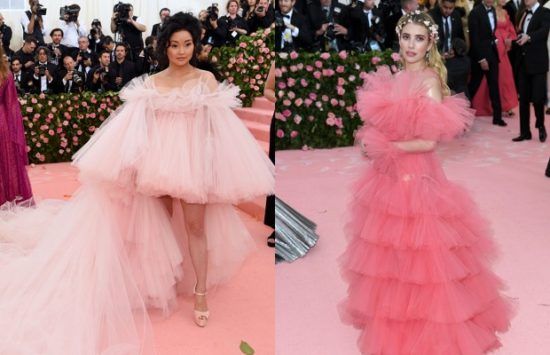 8. Battle of the Sleek Pink Dress

Going to the Met Gala doesn’t always have to be overly dramatic, according to Gisele Bundchen and Hailey Bieber! Both ladies opted for sleek pink gowns, but the question is, who pulled the look off better? While Gisele opted for a pleated lilac-tinted dress with fluttery sleeves, Hailey opted for a sleek soft pink look with a swooping low back and a sweet velvet bow in her hair. Which pink look do you prefer — Gisele or Hailey’s? Be sure to vote! 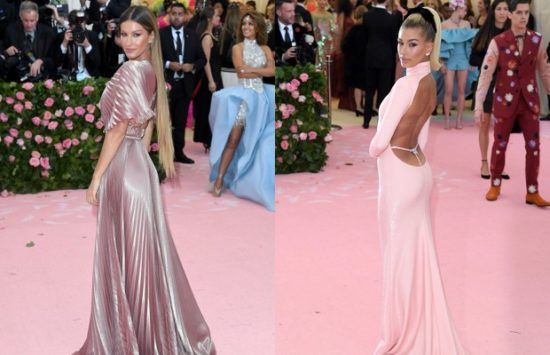 7. Battle of the Sculptured Dress

There’s no better time than the Met Gala to opt for something structured and chic on the red carpet! Miley Cyrus decided to opt for a chic Yves Saint Laurant dress which featured a sharp asymmetrical shape and emerald striped pattern. Liza Koshy, on the other hand, opted for a pink and silver Balmain number with a similarly constructed shape to it. Whose sculptural dress do you prefer — Miley’s or Liza’s? 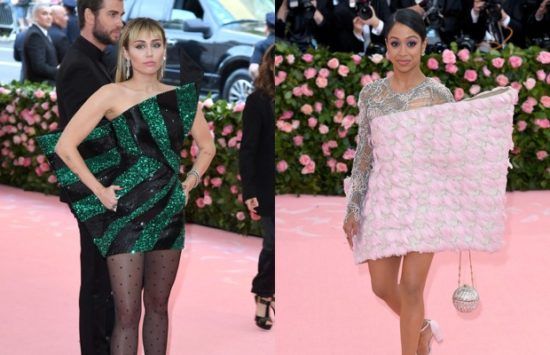 6. Battle of the Rainbow Dress

The Met Gala is the best red carpet of the year to opt for rainbow, according to both Lupita Nyong’o and Cara Delevigne! For the occasion, Nyong’o donned a butterfly-inspired look designed by Versace. It featured rainbow wings, a sleek skirt, and dramatic metallic makeup. Cara Delevingne, on the other hand, opted for a rainbow puff sleeve jumpsuit designed by Dior. She accessorized with a fruit headpiece and cane that caught quite a lot of attention. Which rainbow look do you prefer — Lupita in Versace or Cara in Dior? 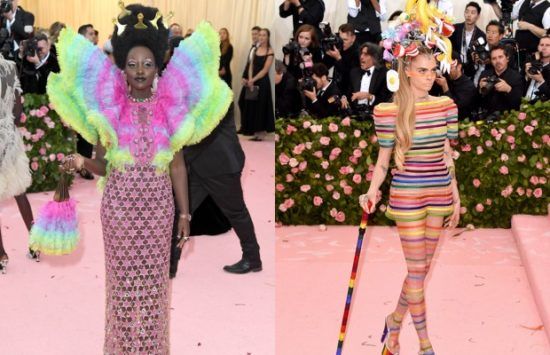 5. Battle of the Glitter Fringe

Glitter fringe is a huge statement maker on the red carpet, and fashionistas Jennifer Lopez and Celine Dion are both fans of the trend! Jennifer Lopez stepped out for the 2019 Met Gala wearing a Cher-inspired look that featured a sparkling fringe texture and headpiece. Celine wore a similar golden fringe look but hers had long, draping sleeves and a dramatic sculptural headpiece. Who wore the trend better — J.Lo or Celine? 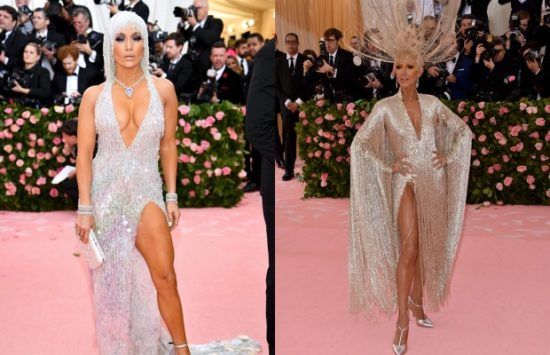 4. Battle of the Gold Dress

It wouldn’t be the Met Gala without a golden dress or two! Both Emily Blunt and Mindy Kaling stepped out at the 2019 Met Gala glistening in shades of gold. While Blunt opted for a starker gold look in Alexander McQueen, Kaling opted for something a little more subtle in this champagne-toned dress by Moschino. Who won the battle of the gold dress — Blunt or Kaling? 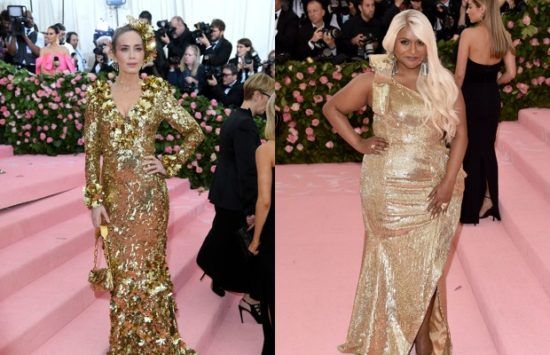 3. Battle of the Feathered Dress

Feathers were a huge trend at the Met Gala this year, but two of the most memorable feathered looks came from Kendall and Kylie Jenner. The real question is though, who wore feathers better — Kylie in violet or Kendall in tangerine? 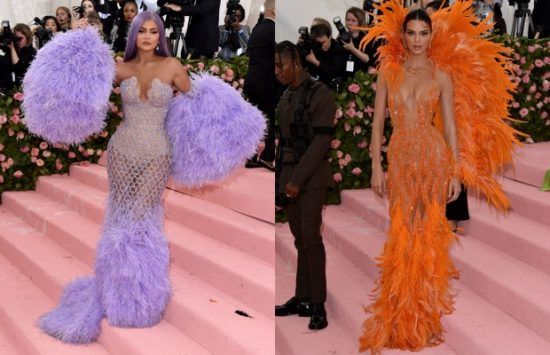 2. Battle of the Old Hollywood Look 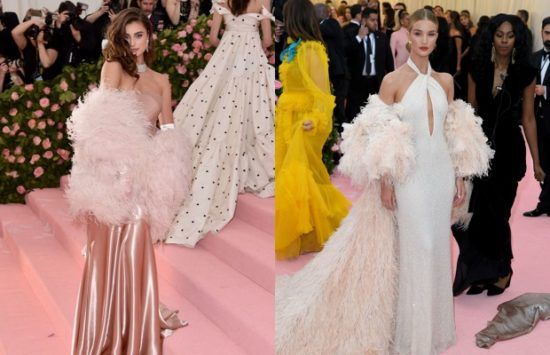 1. Battle of the Cinderella Dress

Cinderella-inspired looks were a surprising trend on the Met Gala red carpet this year! While Zendaya opted for a full-length version of the look with this dazzling Tommy Hilfiger number, Nina Dobrev tried something a little sultrier with a mini dress version by Zac Posen. Who wore the Cinderella trend better? Zendaya or Dobrev? 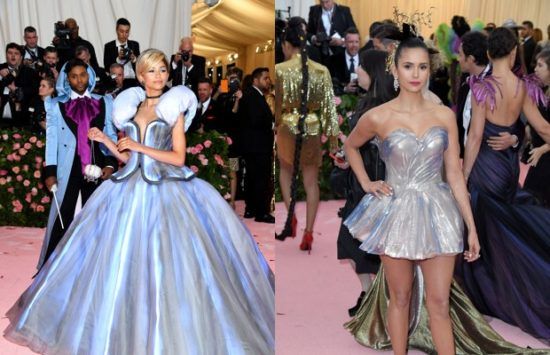 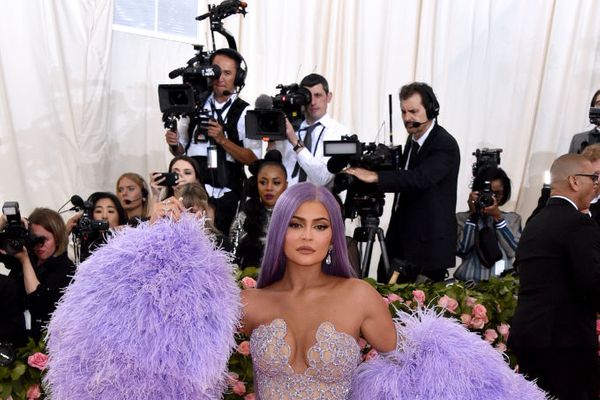