Oscars 2019: The 24 Most Disappointing Looks

The 2019 Oscar Awards red carpet had a lineup of bold and trendy red carpet dresses this year. We saw everything from oversized ruffles to intricate patterns to glitzy embellishment, but this doesn’t always mean for the better. Follow along as we recap the 24 most disappointing looks from the 2019 Oscars:

Melissa McCarthy stepped out at the 2019 Oscar awards opting for a pantsuit rather than a dress. While we typically love when women shake things up with a pantsuit every once in a while, we felt that the cape that was part of this ensemble was a little unnecessary and detracted from the look.

We were quite baffled by this magenta ruffled look worn by Linda Cardellini on the Oscar red carpet. The oversized and overly foofy dress totally drowned her and felt quite over the top. From the ruffles to the bow to the color, we just couldn’t get on board with this look.

Lisa Bonet stepped out at the 2019 Oscar awards this year wearing an interesting purple and pink dress that felt a little chaotic. From the shiny pink texture, to the high neckline, to the mesh overlay, this look definitely left us puzzled.

Glenn Close’s look shocked everyone when it was revealed that the golden dress weighed 42 pounds. We definitely give Close kudos for walking around in a dress so heavy, but we can’t say it was the most flattering. The gold color seemed to wash her out and the entire look seemed to drown her in fabric.

Zooey Deschanel stepped out at the 2019 Oscars wearing a red dress that we thought was much better suited for a summer afternoon than the red carpet. The halter look felt significantly too causal for the event, which is why we were disappointed.

Sarah Paulson donned a bright pink oversized gown at the 2019 Academy Awards that definitely puzzled us. We love the color and the voluminous skirt of this dress, but the strange shape of the top and the unflattering cutouts at the waist weren’t the best. She almost nailed her look, but a few small details of the dress threw it off.

We were quite let down by this nude look worn by Leslie Bibb at the 2019 Oscars this year. The color did nothing for her skin tone and totally drowned out her fair complexion. We would have much preferred Bibb in a rich jewel tone to really light up her face.

We have to admit we didn’t love this black ensemble worn by Giuliana Rancic at the 2019 Oscar Awards. With so many red carpets under her belt as the co-anchor of E! News, we simply had higher expectations for her look than this textured black number.

Maya Rudolph left us stunned with her red carpet look for the 2019 Oscars, but not in a good way. This look had everything from a cape to ruffles to a bold color and even a print. It simply felt like too much, which is why we weren’t the biggest fans.

Irina Shayk is likely one of the most beautiful women in the world, which is why we had high expectations for her red carpet look when she attended the Academy Awards with her Oscar-nominated boyfriend, Bradley Cooper. This black dress was quite underwhelming and the gold embellishment along the waistline felt awkwardly placed.

We were quite confused by this emerald green dress worn by Olivia Colman at the 2019 Academy Awards. The look featured a strange embellished shawl that functioned as both a bow and sleeves. It was unlike anything we’d ever seen before, but we can’t say we were fans.

Laura Dern wore a deep brown dress that was quite underwhelming at this year’s Academy Awards. The color did nothing for her complexion and the shape did nothing for her figure. Luckily, we did love the diamond necklace she topped the look with which added some much-needed sparkle.

SZA stepped out at this year’s Oscar Awards wearing an interesting ivory dress that had quite a lot going on. The dress itself isn’t our favorite of the night, but it’s also not overly awful, so what truly disappointed us about this look was her messy beehive hairstyle. It made everything feel undone and sloppy. If she had pulled her hair into a polished hairstyle to allow the dress to shine, her look could have had a lot more potential.

Tina Fey stepped out at this year’s Academy Awards wearing a royal blue dress that we felt a little underwhelmed by. The color is obviously beautiful on Fey, but the dress itself is just so simple and felt like it was lacking a little glitz or embellishment.

Crazy Rich Asians actress Awkwafina stepped out wearing a sparkling suit for this year’s Academy Awards that we have to admit we didn’t love. The lavender pantsuit by DSquared2 seemed to wrinkle and buckle in all the wrong places proving that it wasn’t properly tailored. In comparison to her glamorous costars, this look definitely fell flat.

15-year old Elsie Fisher stepped out on the red carpet at the Oscars this year wearing a heavy black tuxedo. For someone so young and talented, we would have loved to see her opt for something a little more fun and youthful in the fashion department. We do, however, love the glitzy hair clip she added to her hair!

We have high expectations for Charlize Theron when she hits the red carpet, but we, unfortunately, weren’t thrilled with her choice of dress this year for the Oscars. The look didn’t feel properly tailored to her body, especially with the cuffed sleeves, and it wasn’t the most flattering option for her statuesque figure.

Rachel Weisz has not had a winning season for red carpet fashion in 2019, and unfortunately, the 2019 Oscars were no exception which was a huge letdown. The actress stepped out wearing a cherry red dress that featured a strange latex-like detail along the bodice that we just couldn’t get on board with.

Danai Gurira is a red carpet all-star, which is why we were quite disappointed with the look she wore to the 2019 Oscars this year. The shade of gold was a little too stark to be pleasing to the eye and we would have much preferred something a little softer in a shade of champagne.

As much as we wanted to love this rich purple number worn by Lucy Boynton, there were just a few details that swayed us otherwise. What mostly turned us off were the unnecessary bows along the shoulders and waistline. This look would have been so elegant without these distracting details!

Crazy Rich Asians star Gemma Chan has proved she has a strong sense of style based on her previous red carpet looks this year, which is why we were disappointed with this unshapely pink number. The color looked fabulous on the skin tone, but this dress simply did nothing for her figure and felt like it drowned her.

Of all the red carpet looks at the 2019 Oscars, we were most disappointed with this strange look worn by Emma Stone. The look was designed by Louis Vuitton and featured a bizarre checkered chocolate and gold print. Many were comparing her look to a waffle, which we can totally see! 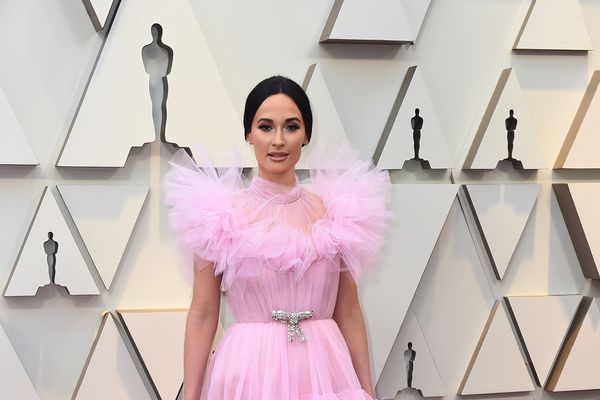