Pippa Middleton – who stole the show at her sister Kate Middleton’s wedding to Prince William – attended Prince Harry and Meghan Markle’s nuptials in this a mint green and pink floral “Hepburn” silk dress by The Fold with a matching pink hat. She’s reportedly pregnant, but it’s hard to tell because she still looks so slim!

Prince Harry’s ex-girlfriend Chelsy Davy attended the wedding in this short-sleeved, navy dress with a matching hat with feathers and a pair of nude heels. The two dated for several years from 2004 to 2011 and have remained friends, hence the invite to his wedding.

Joss Stone wore a pretty floral dress with a white hat with a pair of navy-blue pumps and a matching clutch. No one was expecting to see her at the wedding, but she and Prince Harry have been friends since they met back in 2005 at a Prince’s Trust fundraiser.

Meghan Markle’s good friend Priyanka Chopra attended the nuptials in this lavender Vivienne Westwood lunch suit with a matching Philip Treacy fascinator. Even though she was nervous about how to wear the small hat, she managed to look both elegant and sophisticated.

Cressida Bonas – another ex-girlfriend of Prince Harry’s – looked bright and colorful in this rainbow-colored dress that she wore with a matching pink fascinator and matching heels. She and the prince quietly dated for a couple of years from 2012 and 2014.

As a friend of Meghan Markle’s, naturally, Serena Williams got an invite to the wedding. She wore a blush pink dress with a matching fascinator and a necklace from Bulgari’s heritage collection. She documented herself getting ready for the wedding on Instagram, expressing how excited she is for her long-time friend.

Suits star Gina Torres made a stylish entrance at Prince Harry and Meghan Markle’s wedding. She donned this orange print dress from Greek fashion house Costarello with a pair of nude pumps, a nude clutch and a matching fedora. We love how bright the dress is! It really stole the show.

Carey Mulligan looked elegant at Prince Harry and Meghan Markle’s wedding in this yellow floral dress, which she paired with a pair of grey suede heels. Her husband Marcus Mumford of Mumford & Sons looked handsome alongside his beautiful wife in a black tux jacket and striped dress pants.

Victoria Beckham looked gorgeous in this caped navy-blue dress from her line, which she paired with a pair of red pumps, and a navy-blue hat and veil, while her hubby, David, looked handsome in a gray and black three-piece suit. After all of these years, these two are still one of Britain’s most stylish couples!

Kate Middleton wore a yellow Alexander McQueen dress that looked awfully similar to the dress she wore to Princess Charlotte’s christening in 2015. She accessorized with a hat by Philip Treacy and shoes by Jimmy Choo. Judging by how great she looks, it’s hard to believe that she had a baby less than one month ago!

Amal Clooney attended the royal wedding with George Clooney. She stunned in this yellow dress and matching yellow hat while George looked dapper in a grey suit. Apparently, Amal knows Meghan Markle and has for a while. The Clooneys will be attending the private evening reception at Frogmore House that will be hosted by Prince William. 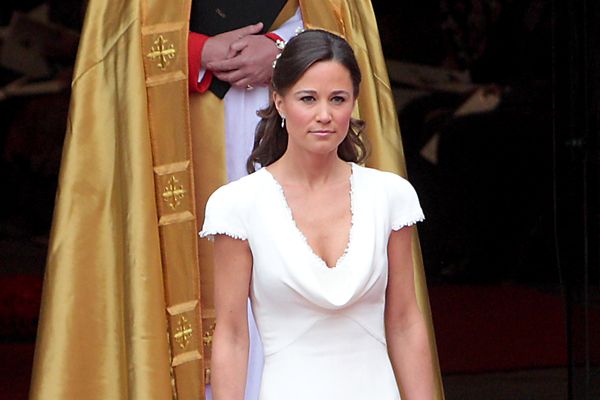 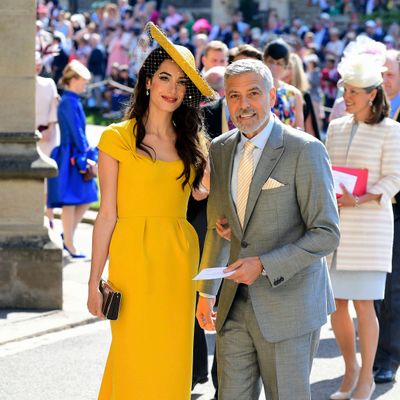