Awards season is in full swing this January and along with the Golden Globes and Grammys, we also see a few smaller red carpet events such as the Screen Actors Guild awards! The red carpet for the SAG’s never fails to disappoint whether it be Sofia Vergara’s bright fuschia gown or Alicia Vikander’s patchwork sequin look, so follow along as we recall 15 of the most memorable SAG red carpet dresses of all time:

Rose Bryne looked absolutely dazzling on the 2012 SAG red carpet when she stepped out wearing a low cut sparkling jumpsuit that undeniably turned heads. The garment was from the Ellie Saab 2009 couture collection and featured cap sleeves, a crossover detailing along the waist and wide legged pants. The star wore her hair in a blunt bob and rocked a colorful clutch to add a statement piece! 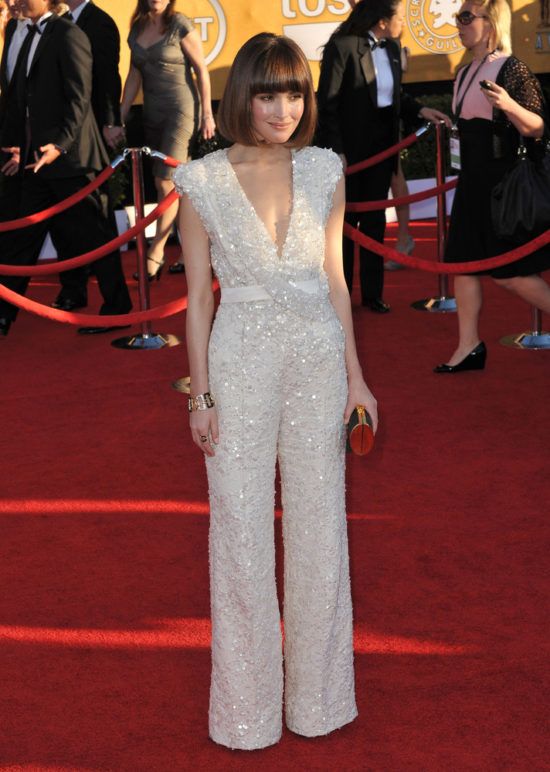 Viola Davis has a simplistic yet glamorous vibe about her style, and this particular SAG red carpet dress from 2012 definitely proves that! The Grecian-inspired gown was designed by Marchesa and featured a wrap style top that was embellished with golden beading. The crisp white gown was relatively simple aside from the minimal bodice embellishment, yet still looked totally fabulous and swoon-worthy. 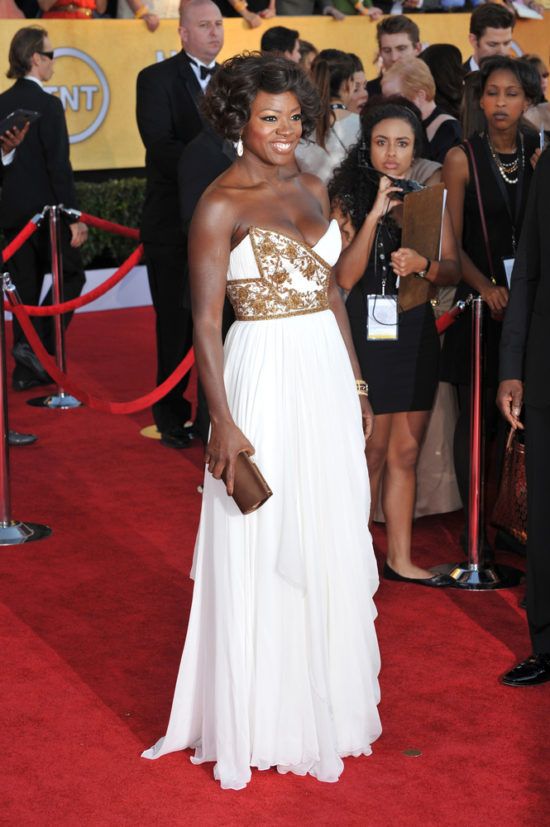 Jennifer Garner most definitely turned heads on the 2013 SAG red carpet when she wore this dazzling Oscar De La Renta number. The golden ensemble featured a lace texture throughout that was covered with intricate beading and sequins. The actress literally glowed head to toe the entire night and even added a gold metallic clutch for extra sparkle! 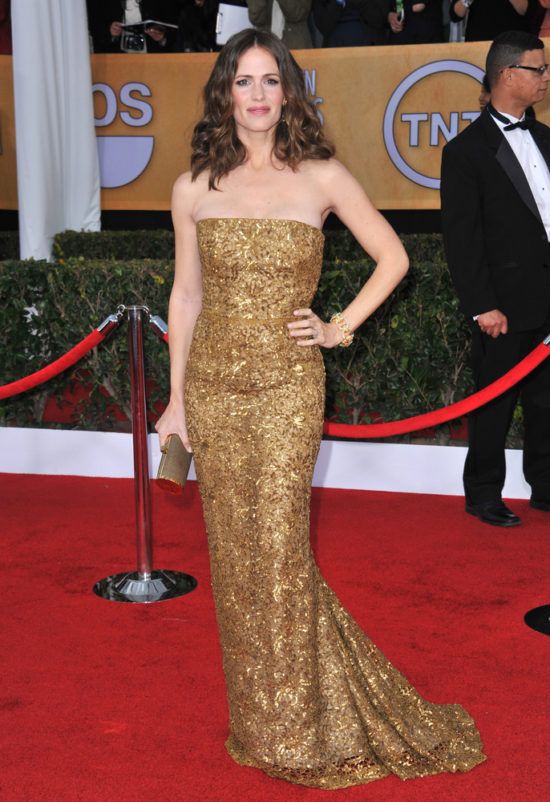 One of Mila Kunis’ most memorable fashion moments was when she stepped out on the 2011 SAG awards red carpet wearing this scarlet red Alexander McQueen number! The rich shade of red complemented the brunette beauty fabulously and worked perfectly with Mila’s soft curls and Cartier jewelry. The abstract print in shades of red, black and pale pink definitely made a statement, but the combination was still subtle enough to look classy and elegant. 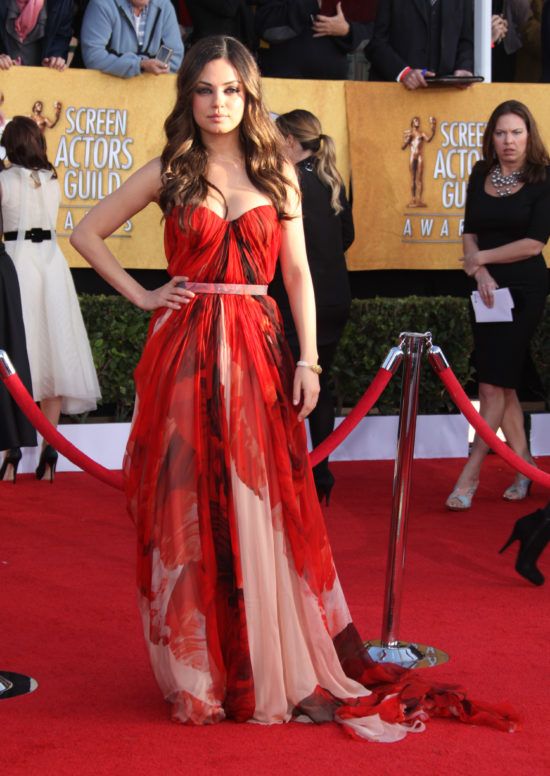 Amy Adams rocked a bold cobalt blue gown at the 2014 SAG awards that undeniably turned heads! Adams is known for opting for a statement color rather than a neutral or metallic and always looks absolutely fabulous doing it. This rich blue shade paired perfectly with Adams’ red locks and porcelain skin, but what was even more noteworthy was the unique cut of this dress. The Antonio Berardi design featured a one-shoulder neckline that had cut-outs on the chest and arm as well as a sparkling silver belt, which made it quite unique. 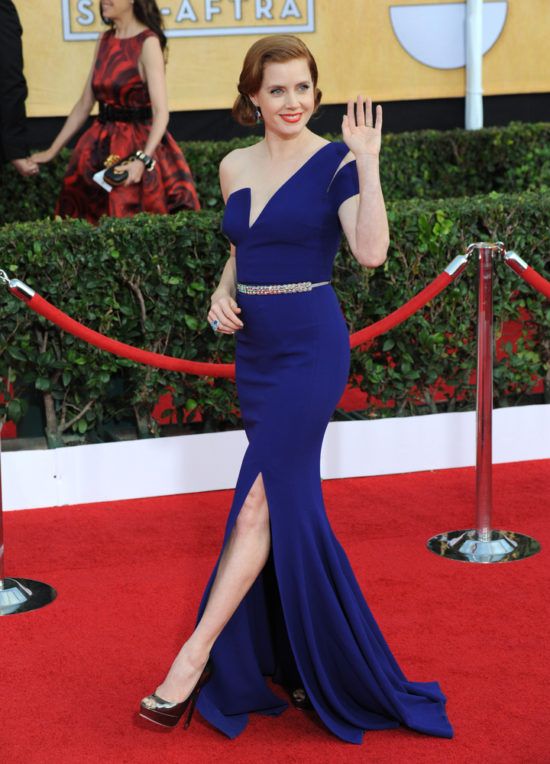 At the 2014 SAG awards, Lupita Nyong’o rocked a totally gorgeous Gucci gown that was a bold shade of teal and showed off her slender figure perfectly. The true standout feature of this gown, however, was the intricate couture detailing along the collar. The look was quite avant-garde inspired, and especially with the adornment of dainty flower applique along the neckline. To finish off the look, Nyong’o added a pop of teal on her lids and a soft pink shade on her lips. 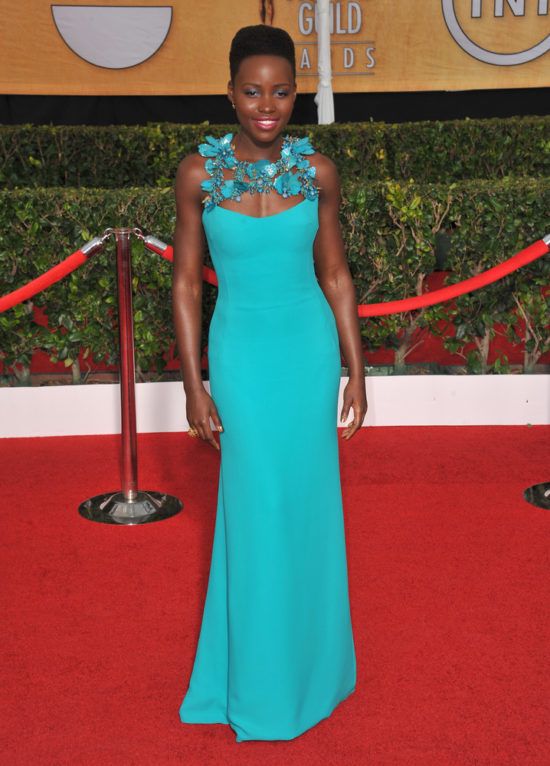 Jessica Chastain stepped out at the 2013 SAG awards wearing the most stunning Alexander McQueen number that had no shortage of elegance and glamour! The garment was surprisingly quite minimal but the luxurious shade of red and subtle layer detailing across the bust was enough to steal the show. The dress hugged Chastain’s curves in all the right places and the sparkling diamond necklace around her neck added the perfect amount of Hollywood glitz! 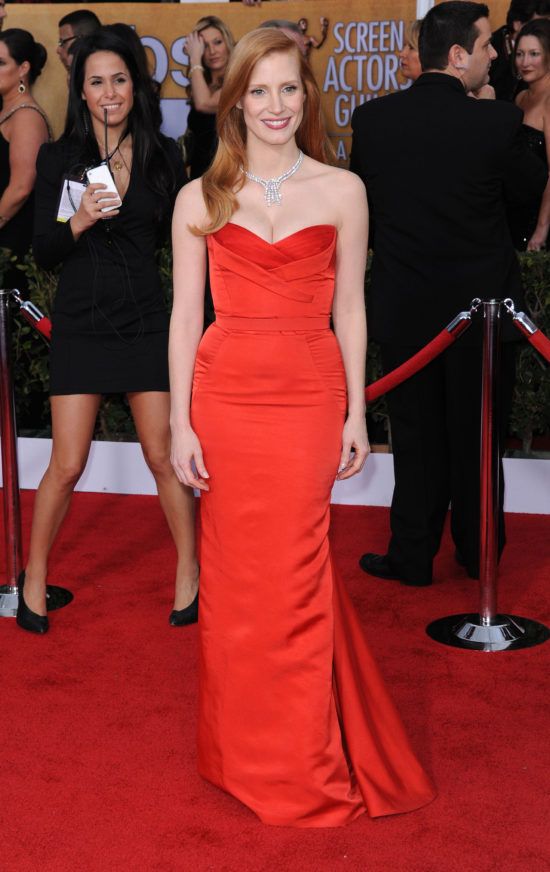 Alicia Vikander is a fashion superstar and constantly steps out in garments that are totally unique but still stay true to her signature fashion sense of style and elegance. This particular SAG awards look was one of our absolute Vikander favorites! The actress stunned in a patchwork Louis Vuitton gown that was entirely covered in sequins and featured a high-neckline, long sleeve cut. The look played up neutrals with shades of black, navy, gold and white, yet was still totally unique and like nothing we’ve seen before! 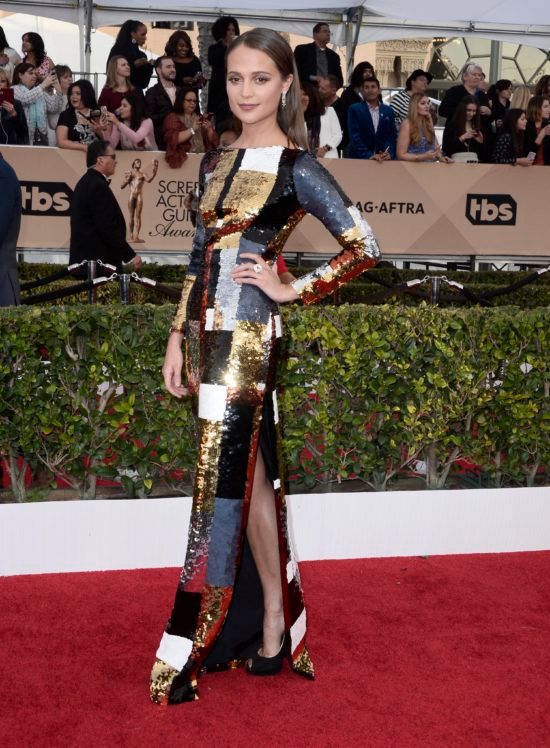 Catherine Zeta-Jones was totally glam in gold back when she appeared on the 2004 SAG red carpet! The sparkling Ellie Saab look showed off her unbelievably tiny waist, especially with the sweeping embellishment that cascaded across the front in a flattering curve-enhancing shape. The gown was timeless, elegant and despite appearing on the red carpet back in 2004, this style is something we could definitely expect to see at a current Hollywood event! 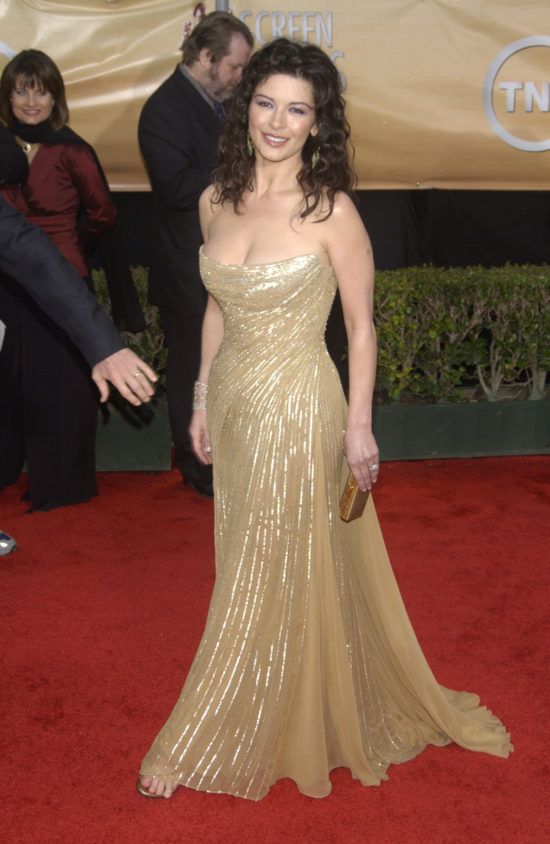 The lush royal purple gown that Camila Alves wore to the 2015 SAG awards was undeniably one of her most glamorous red carpet dress moments! The trumpet style dress featured gorgeous draped fabric in all the right places and a train that cascaded off the dress and trailed elegantly behind her. She skipped on the jewelry with this dramatic dress and allowed her glowing complexion to shine by simply tucking her sunkissed locks behind her ear on one side. 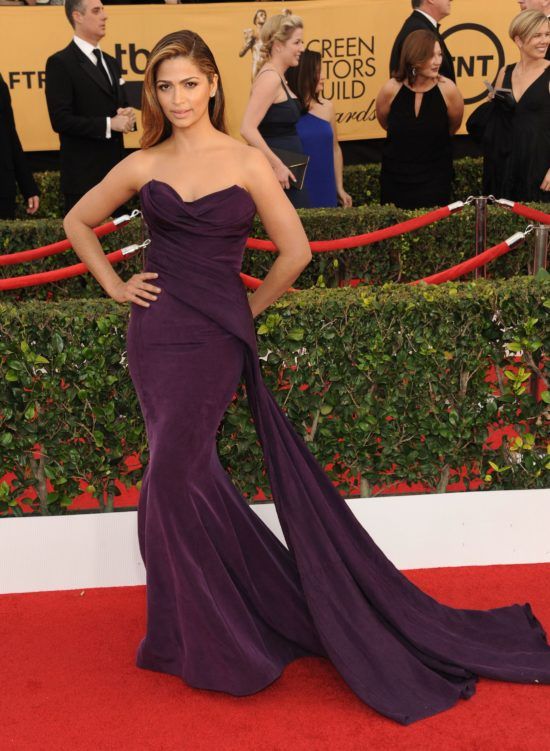 Naomi Watts absolutely stunned when she appeared on the 2013 SAG red carpet back in 2013! The metallic Marchesa design she rocked was covered entirely with silver embroidery and was both elegant and romantic. Watts added an old Hollywood vibe to the look by pulling her vintage-style curls over one shoulder and rocking a bright crimson pout on her lips. She finished the look with a metallic clutch and a pair of dazzling diamond cluster earrings. 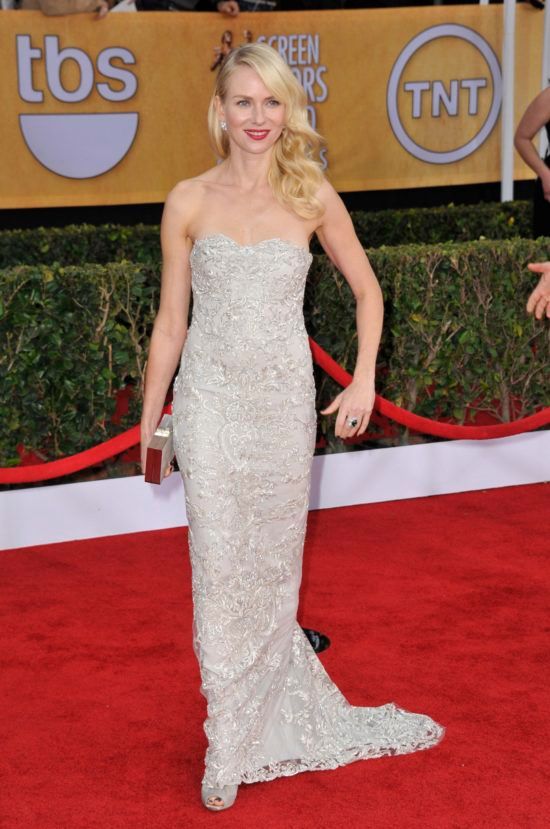 Mustard is definitely a tricky color to pull off, but Diane Kruger did so flawlessly on the 2013 SAG red carpet! The bold chiffon number featured an asymmetrical neckline where one side draped as a cap sleeve and the other fell in an off the shoulder style. The trumpet shape of the design hugged her curves perfectly and she topped the look with a scarlet pout that matched her clutch. Kruger absolutely took a risk with this color, but it totally paid off with how flawlessly the look came together on the red carpet! 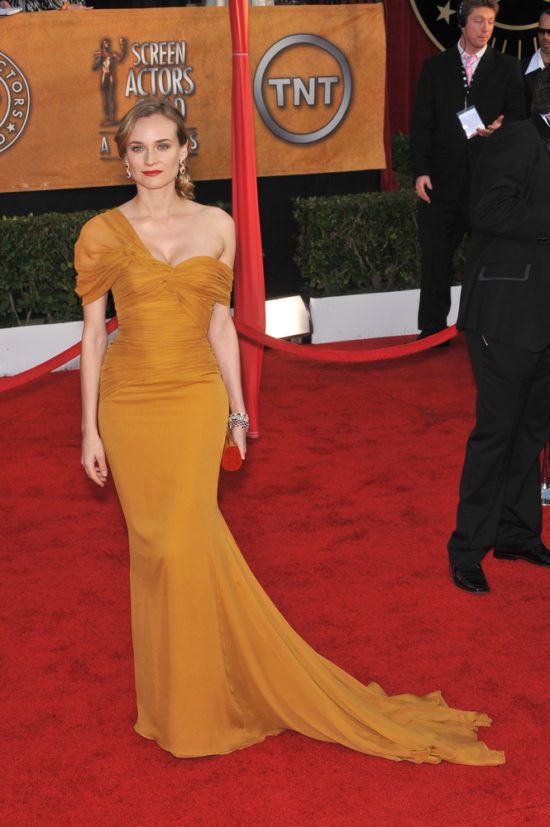 Lea Michelle definitely turned heads with the glitzy dress she wore to the 2015 SAG awards! The gown was clean and crisp yet still totally glamorous with the slight shimmer and flattering ruching throughout. Michele added a metallic gold belt to cinch in her waist and donned a diamond cuff on her wrist for added glamour. She kept her hair in messy, undone beach waves around her shoulders and wore her makeup rosy and glowing. 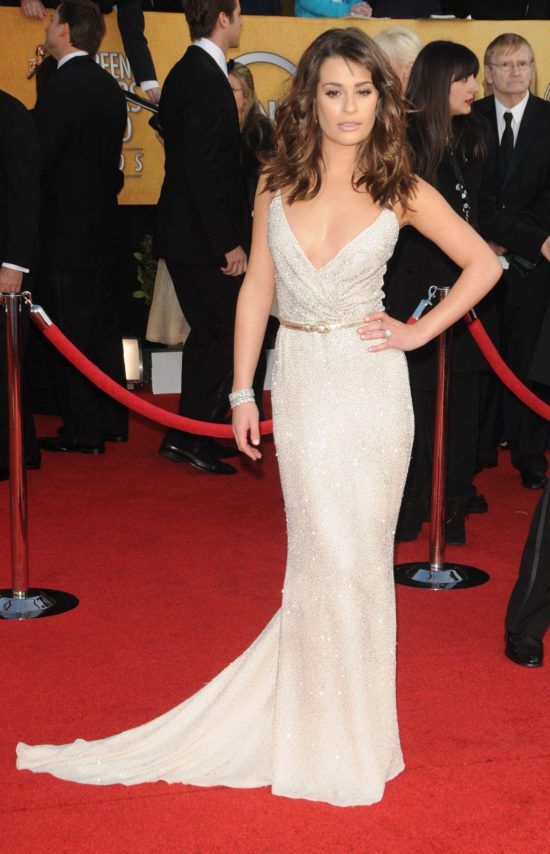 Kate Hudson wore the ultimate backless dress when she appeared on the 2012 SAG red carpet! The sultry number featured a long sleeve, slim fit cut and sparkle embellishment along the sides, but the elegant back of her gown is what totally stole the show. She pulled her hair into a feminine teased updo and wore a pop of peach on her cheeks. 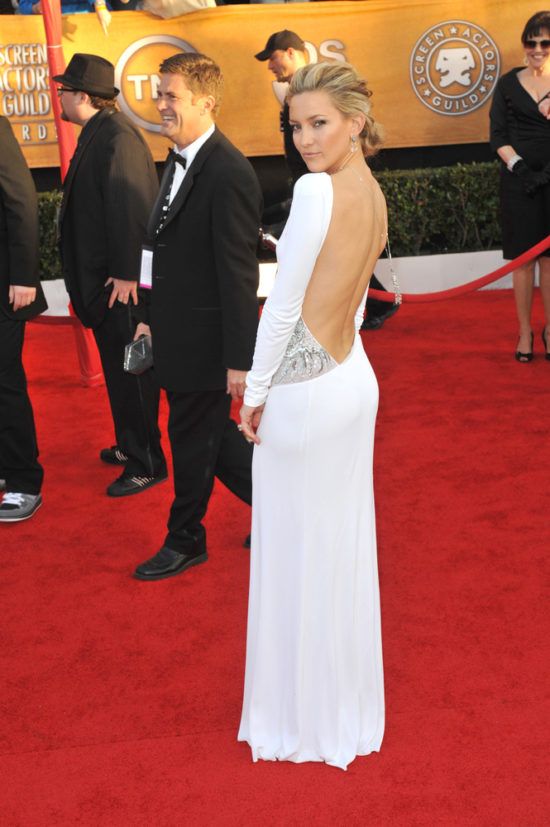 Sofia Vergara looked like an absolute bombshell at the 2016 SAG awards red carpet! The strapless, sweetheart gown had absolutely no embellishment, but it was the bold punch of bright magenta that truly made her stand out. The color looked absolutely fabulous with Vergara’s olive complexion and the slim fit of the dress hugged her curves in all the right places. She paired the look with a matching fuschia clutch and wore a similar shade of pink on her lips. She allowed her hair to fall in tousled waves and wore a chunky gold necklace around her neck for added glamour. 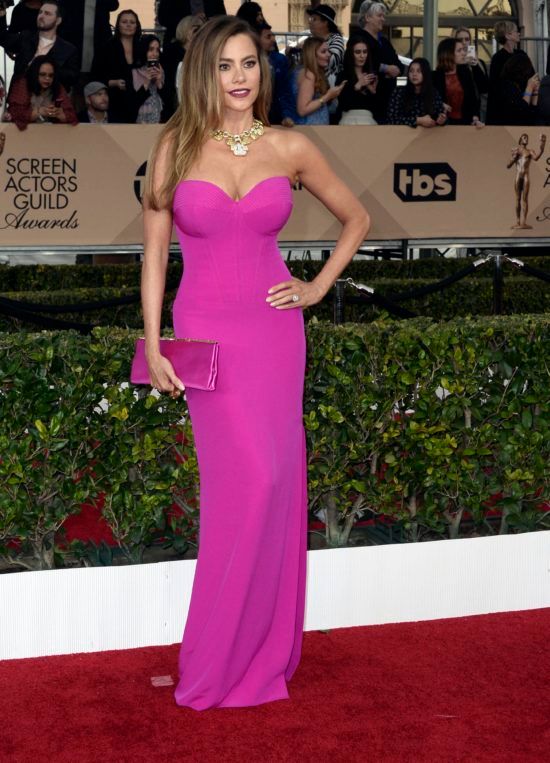 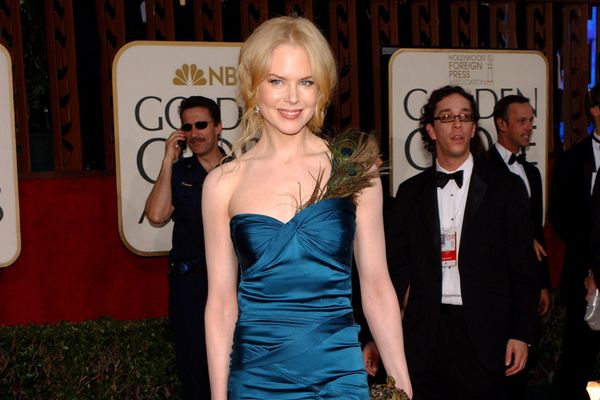