The Golden Globes are just around the corner and, as always, a huge portion of the anticipation surrounds the red carpet fashion and the stunning designer garments. Rumors have circulated that this year’s Golden Globes will feature an all-black color palette to honor the victims of Hollywood assault, which will definitely make this year’s show even more of a significant fashion moment in Golden Globe history. With this in mind, follow along as we recall 14 of the most memorable Golden Globes dresses so far to date:

No one could forget Dakota Johnson’s stunning and unique Golden Globes dress from 2018. Although the front of her gown was relatively simple with a straight-cut neckline, dainty spaghetti straps and a minimalistic sparkling broach, the back of her dress was truly inspiring! The back featured a crystal-embellished bow design that trailed into a spattering of sparkles all along the back of her dress and left us absolutely speechless. 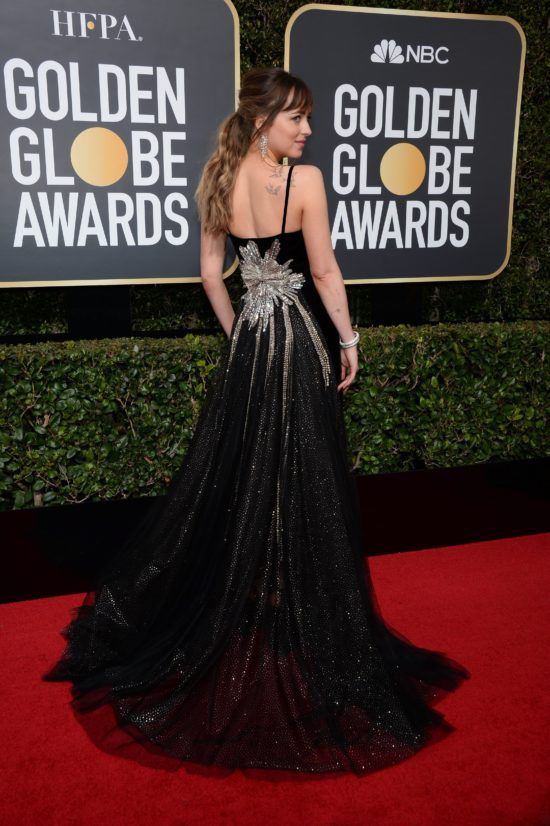 Jessica Biel looked absolutely dazzling on the 2018 Golden Globes red carpet where she donned a princess-style Dior gown. The look featured a sweetheart neckline and was covered entirely in sheer black tulle over a nude underlay. For an extra dose of unique detail, the dress featured a flattering velvet detail which curved over the front of the dress. Biel pulled her hair back into an elegant updo and added a punch of color with a berry-tinted lip. 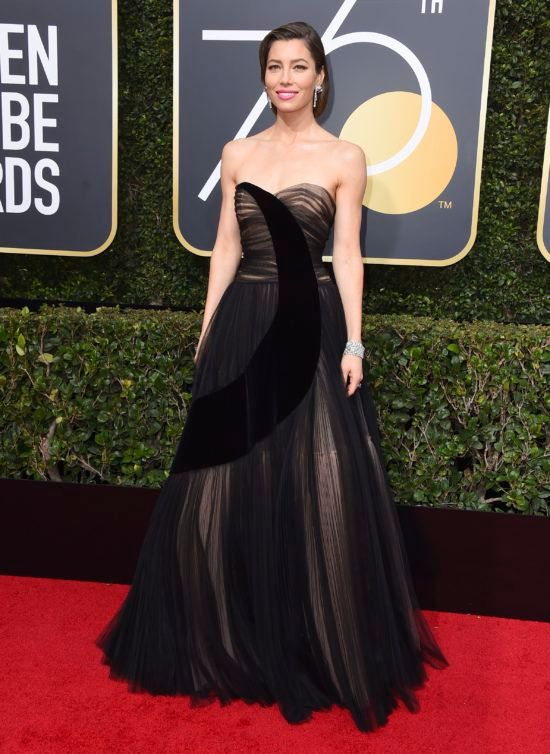 Charlize Theron stunned at the 2012 Golden Globes when she stepped out wearing this dramatic blush number! The dazzling Dior couture gown featured a deep V-neckline and an exaggerated ruffled detailing along the hip that was cinched with a sparkling broach. To add even more glamour, Charlize topped her look with a matching glittering headband. The dress also featured an extravagant high slit detailing that showed off her long, slender legs and strappy nude heels! 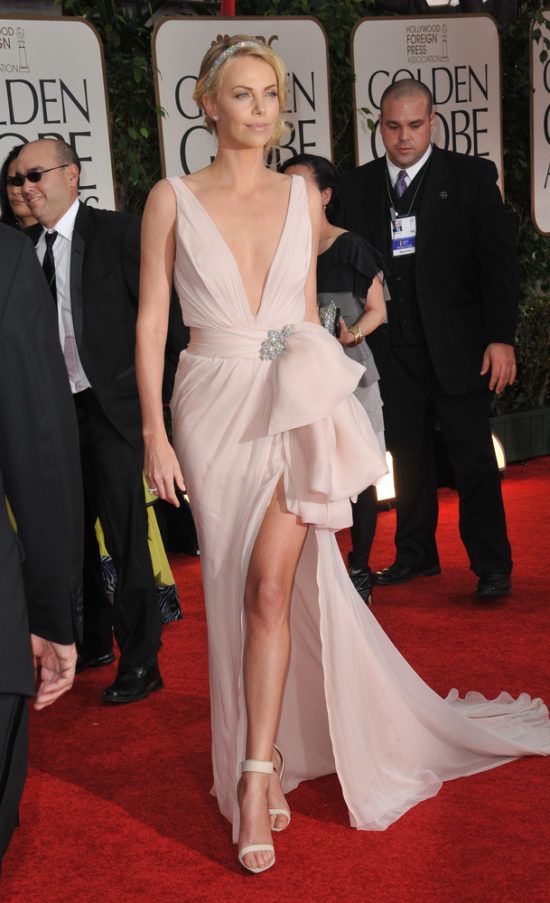 Lupita Nyong’o was absolutely radiant on the 2014 Golden Globes red carpet when she stepped out wearing a sleek red Ralph Lauren number. The look was a crowd favorite and topped nearly every best-dressed list at the time! The bright garment featured clean lines but was still dramatic with it’s sultry off the shoulder neckline and glamorous floor-length cape. 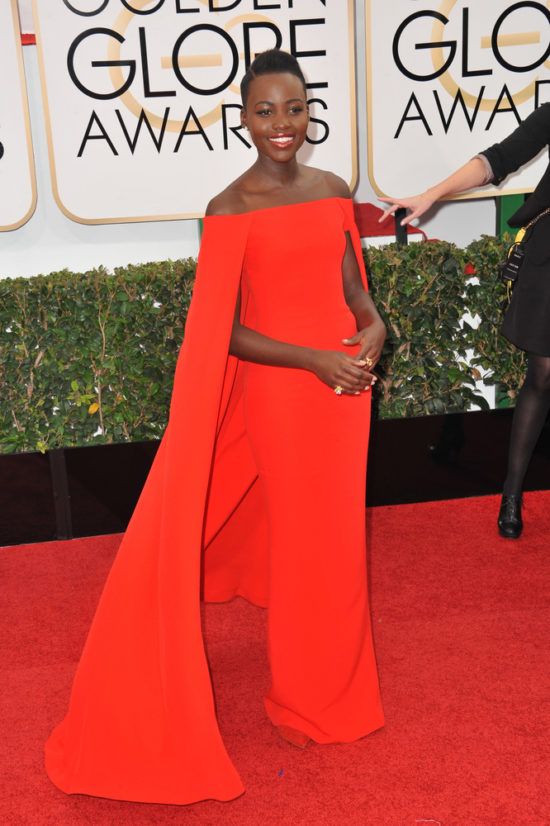 Michelle Williams undeniably turned heads back in 2012 when she stepped out in this midnight blue number designed by Jason Wu. The evening gown featured a sleek shape and long sleeves that were sheer yet demure. The dress was crafted with a crushed velvet material and eye-catching pattern that was subtle yet still made a statement by being super unique. 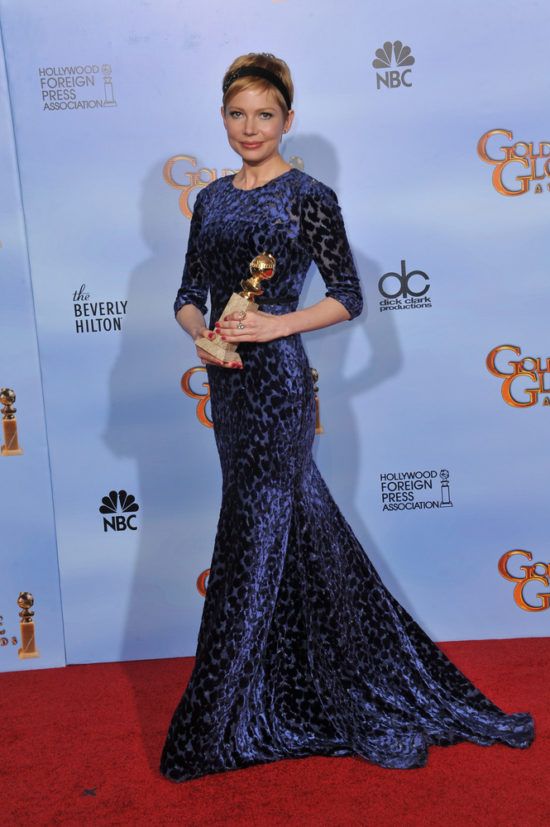 Back in 2011, Scarlett Johansson stepped out on the Golden Globes red carpet wearing a glamorous beaded Ellie Saab gown that most definitely caught attention. The gown featured feminine fluttery sleeves that were sheer and covered in glittering beads as well as a tulle train for added definition and glamour. The gorgeous actress wore her hair in a coiffed updo which allowed her luminous skin and rosy smokey eye to truly shine. 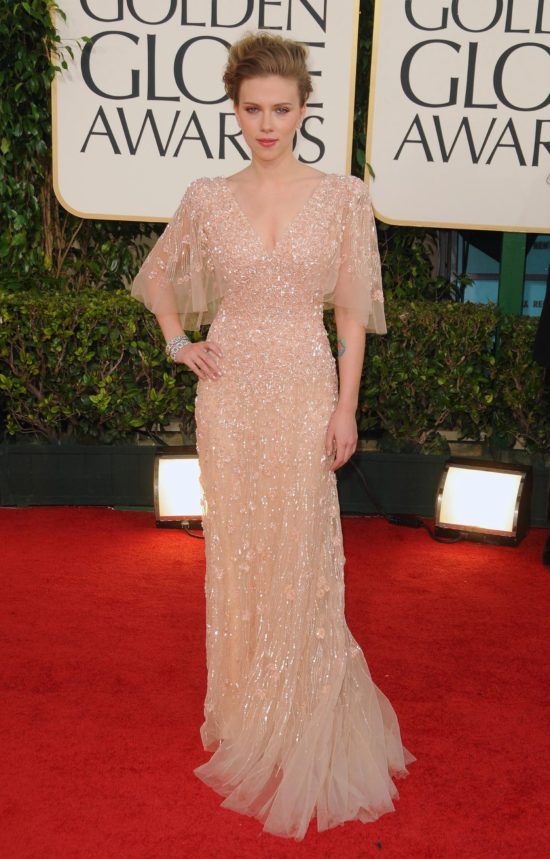 Jessica Alba has been a constant red carpet showstopper throughout her years in the spotlight, but especially at the 2012 Golden Globe awards! The glowing actress wore a lavender Gucci gown that featured a strapless neckline and silver glittering beading throughout. The column style gown was flattering on her slender figure and even more so with the added dark purple ribbon detailing that cinched at her waist. She pulled her hair into a side-swept updo which showed off her toned upper body and luminous skin in the most elegant way possible. 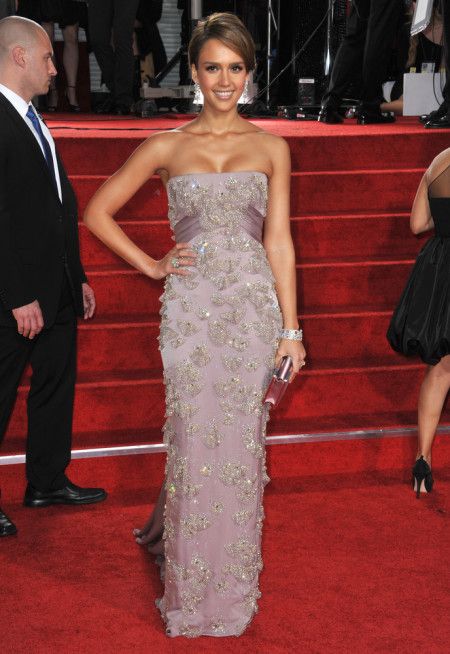 Drew Barrymore wore the perfect mix of old Hollywood and modern glamour with the Atelier Versace nude gown she wore to the 2010 Golden Globes! The dazzling gown featured a ruched detail on the hip that flattered her figure and made her body look tight and slender. The champagne silk gown featured dramatic shoulder and hip embellishment that was avant-garde and bold without being over the top. She sleeked her hair into an elegant side-parted bun and wore a classic muted red pout on her lips. 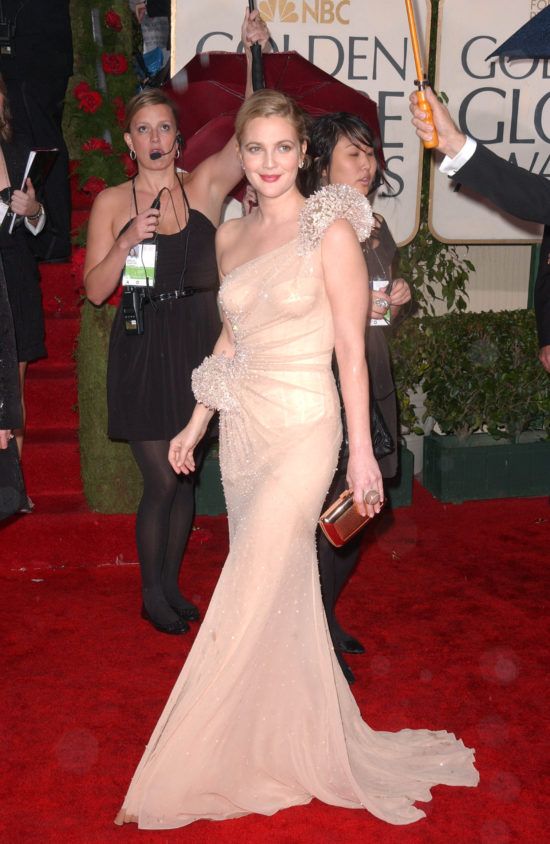 The ever-stunning Anne Hathaway stepped out at the 2009 Golden Globes and wowed everyone with her Armani Prive dark indigo gown. The strapless number was beaded with Swarovski crystals along the bodice and flourished into a full skirt made of layers of tulle and organza. The striking blue shade flattered her porcelain complexion, especially in combination with her smooth dark updo and sultry crimson pout. 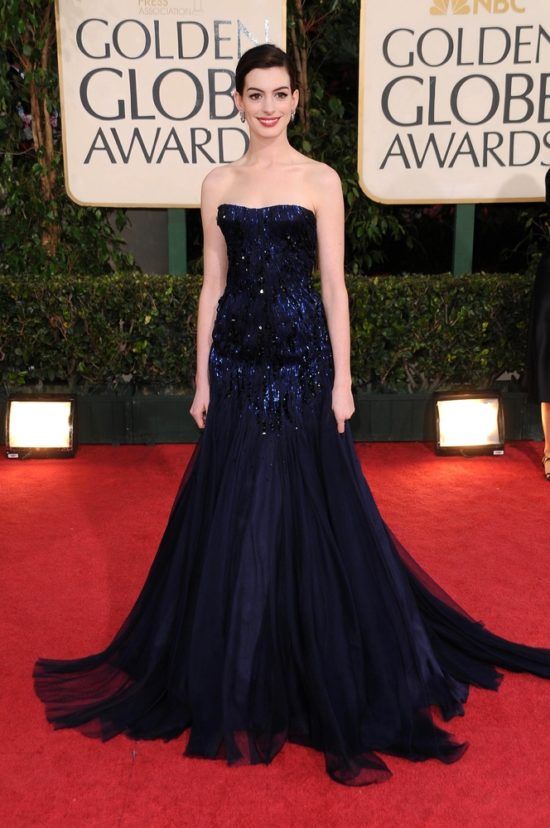 Sienna Miller absolutely dazzled on the 2007 Golden Globe red carpet in this bohemian-inspired look! The dress she wore was a metallic Marchesa design that featured a drop-style waist that was completely embellished with silver applique and embellishment. The neckline was elegant and flattering with it’s slight off the shoulder cut and the crisp color made her sunkissed glow really pop. She swept her hair into a braided updo and topped the look with a matching metallic clutch. 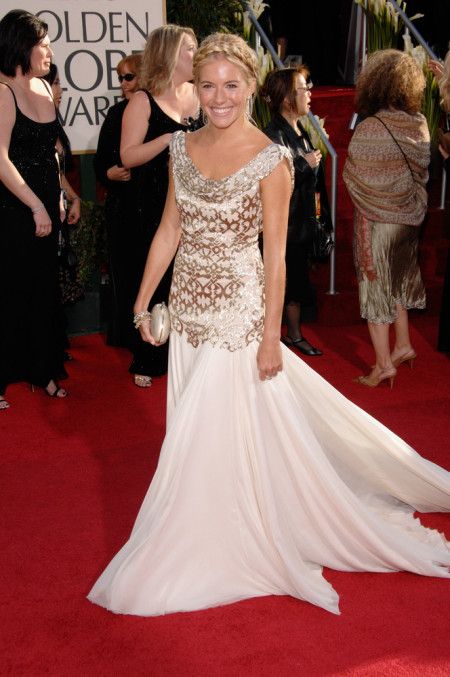 Nicole Kidman stunned in this unique satin Gucci gown at the annual Golden Globe Awards back in 2005! The stunning royal blue body-skimming number featured a dramatic peacock feather strap over one shoulder that was the perfect amount of couture detailing. The bright sapphire shade made for a seriously memorable red carpet moment, especially in combination with her embellished clutch that picked up perfectly on the mossy shades of her shoulder strap. 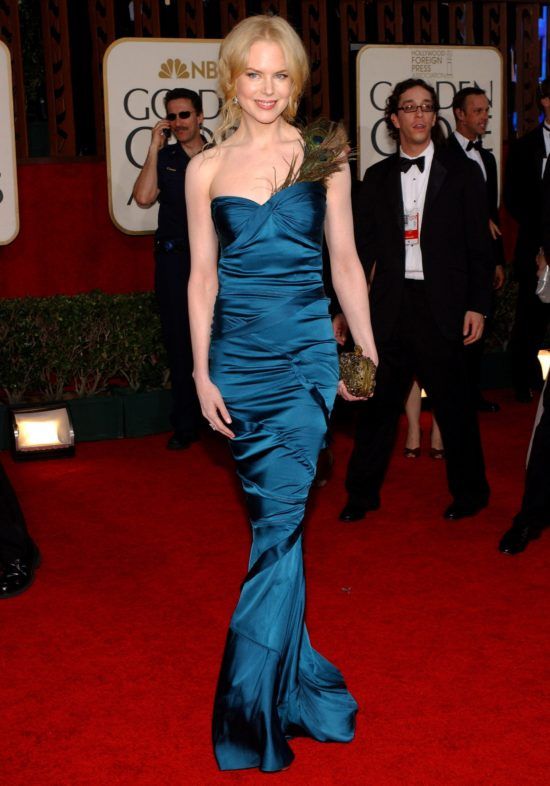 Jennifer Garner was a bronzed beauty at the 2007 Golden Globes when she stepped out wearing a crisp white Gaultier gown! The vintage number was tracked down courtesy of her stylist Rachel Zoe and featured a sleek silhouette complete with silver stud and sequin detailing trailing along the skirt in a geometric design. Sometimes simplicity is key when it comes to fashion, and this striking red carpet moment by Garner definitely rings true to that notion! 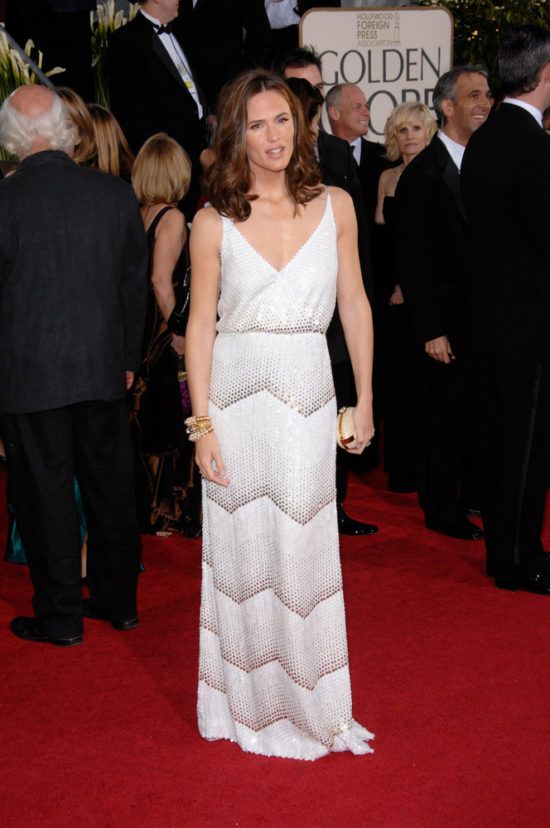 Brunette beauty Eva Mendes was bronzed and glowing at the 2009 Golden Globes where she stepped out wearing a dramatic white Dior dress. The fashion-forward moment was ultra bold with the billowing hip detailing but the basic shape of the dress was strapless, sleek and flattering which still kept everything feeling somewhat minimal. She paired the crisp number with a bold robin egg blue collar necklace that kept things glamorous, eye-catching and totally swoon-worthy. 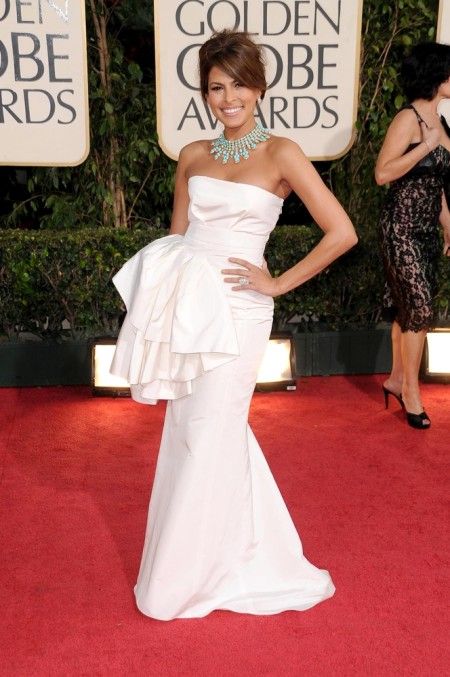 Cameron Diaz was the definition of pretty in pink when she stepped out at the 2009 Golden Globes wearing this one-shoulder frothy number! The satin Chanel garment was a red carpet all-star and landed the blonde beauty on virtually every best-dressed list in 2009. The dress was totally feminine from the dainty texture, ruffled hemline, and candy pink color! She paired the gown with sparkling metallic silver shoes and let her hair fall loosely around her shoulders in beach waves. 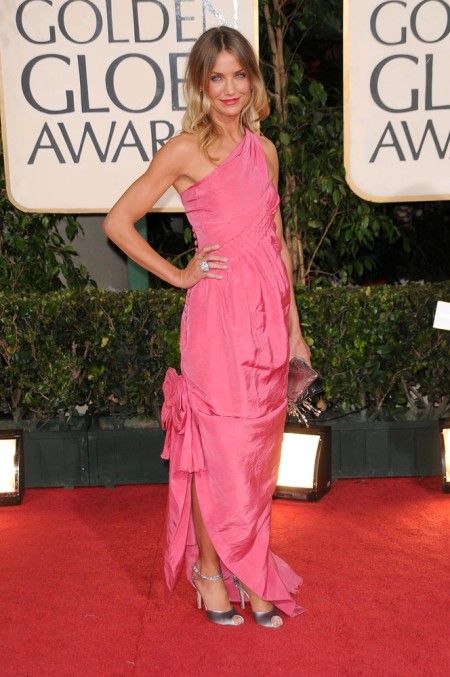 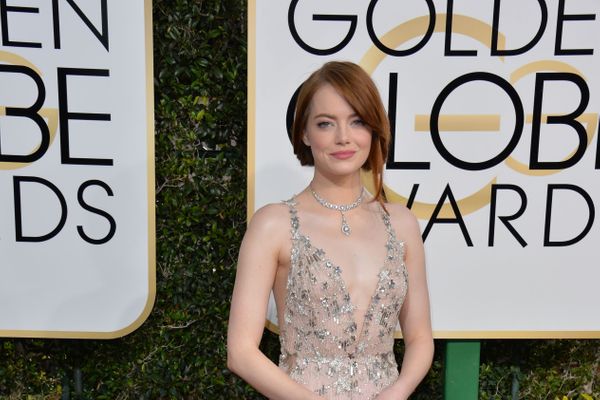