With 2017 quickly coming to a close, it’s that time of year to recount all the best celebrity fashion moments of the year. Following each red carpet event we’ve created a list of the most memorable looks of the evening, but in December we look back at the lists of dresses and pick our ultimate favorites of the entire year. From the glamorous Oscars to the fashion-forward Met Gala, follow along for 12 of the most iconic red carpet dresses for the year of 2017:

Emma Robert’s Armani Prive dress from this year’s Oscars may have been her all-time best look! She channeled old Hollywood with her glam waves and the gown even had a vintage spin with its lace detailing and timeless shape. The dress featured a super deep V-neck line that was covered with floral applique as well as a flowing skirt with tiers in a soft cream color.

Actress Priyanka Chopra attended her first Golden Globe Awards in 2017 and definitely made quite the first impression with her stunning Ralph Lauren gown! The Quantico actress looked absolutely stunning in the glistening golden gown which featured long sleeves, a deep V-neck and an intricate pattern beaded throughout. She paired the look with a gorgeous diamond necklace by Lorraine Schwartz and wore a pop of plum color on her lips.

Mandy Moore made a huge comeback in 2017, especially when it came to fashion! For the Golden Globes, Moore wore a show-stopping Naeem Khan gown that featured an ultra-low neckline, sleek shape, and Grecian-style cape. The dress was understated by being black and featuring no embellishment, but it definitely flattered her figure and looked seriously glamorous.

Zoe Kravitz’s Dior dress undeniably turned heads at this year’s Emmys and won quite a few brownie points for originality. The feathered garment featured a black v-neck bodice that flourished out into a full rainbow skirt! As she twirled around the red carpet and gave 360 views of the skirt, it was clear the dress boasted a surprising amount of colors ranging from fiery warm tones of red and yellow, then transitioning into cool blues and greens and even greys and blacks.

Lupita Nyong’o definitely proved herself to be a fashionista to watch this year after multiple swoon-worthy red carpet moments, but her latest appearance at the Star Wars premiere was arguably her best of the year! The dazzling Halpern design featured a shade of rich emerald green swirled with golden sparkles. The thigh high slit and asymmetrical hemline worked together fabulously and made this an unforgettable fashion moment in 2017.

Bella Hadid wore a striking soft pink gown at the Cannes Film Festival this year and definitely left a lasting impression as one of the most memorable fashion moments of 2017! The ultra leggy Alexandre Vauthier gown channeled old Hollywood glamour with its classic shape, especially in combination with her glam waves. To top off the look, Hadid wore a jaw-dropping 180-carat sparkling sapphire around her neck that made her bright blue eyes stand out even more!

Rules Don’t Apply actress Lily Collins wowed at this year’s Golden Globes in a floor-sweeping romantic ensemble. The A-line Zuhair Murad Couture gown featured a sheer nude bodice that was embroidered with blush-toned rose applique, floral beadwork, and an extravagant train. Collins swept her hair in an elegant updo and wore a sultry oxblood lip to tie the look together.

Zendaya easily stole the show at this year’s Spiderman Homecoming premiere where she wore a bright Barbie pink Ralph & Russo custom gown. The eye-catching look featured a dramatic cape detailing which trailed elegantly behind her as she walked. The neckline was unique by featuring a combination of a thick choker paired with an asymmetrical deep V. The thigh-high slit showed off her matching bubblegum pink pumps and she accessorized with sparkling silver earrings to make for a seriously glamorous red carpet moment.

Jessica Biel looked absolutely incredible at this year’s Emmy awards in her sparkling silver Ralph & Russo number. The gown featured a patchwork design of both glitter and soft pink which was the perfect balance of glitz and romance. The fluttering sleeves, thigh-high slit, and elegant side-swept waves made for a seriously glamorous and swoon-worthy red carpet fashion moment.

The Met Gala is known for extravagant fashion moments, which means often celebrities go over the top with their fashion creations. Blake Lively, however, definitely styled her Met Gala look to perfection this year! At the top, it would seem her look was channeling her old school Serena van der Woodsen days with the low cut neckline and golden textures, but the cobalt blue feathered hemline of the gown definitely spices up the look and adds something extra for the glitzy evening! She wore her makeup luminously and glowy and sleeked her hair in a high ponytail to show off her coordinating cobalt and gold earrings.

Brie Larson looked absolutely stunning at this year’s Oscars where she stepped out wearing an understated yet totally glamorous Oscar De La Renta gown. The voluminous black number featured an exaggerated plunging neckline and a flamenco style ruffled train. The simple yet alluring velvet number looked striking on her, especially with her combination of the red lip and soft, vintage style waves.

Emma Stone definitely made a name for herself in the world of fashion in 2017! Her Golden Globes Awards look definitely stole the show this year and looked dainty and romantic on the lovely actress. The whimsical Valentino gown featured a soft nude color that flattered the star’s fair complexion, especially with the metallic sparkling star embellishment covering the gown. She pulled her hair into a loose, sweeping updo which showed off her stunning Tiffany & Co. jewelry. 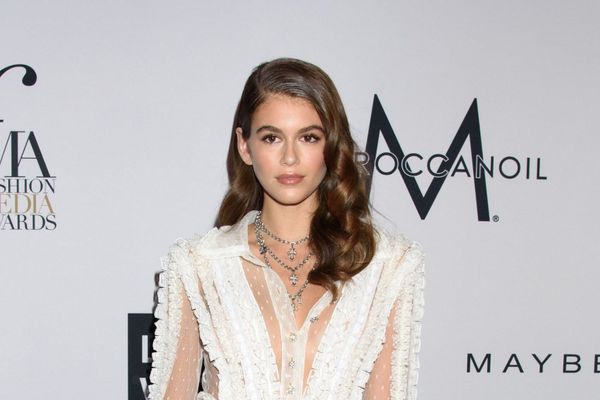